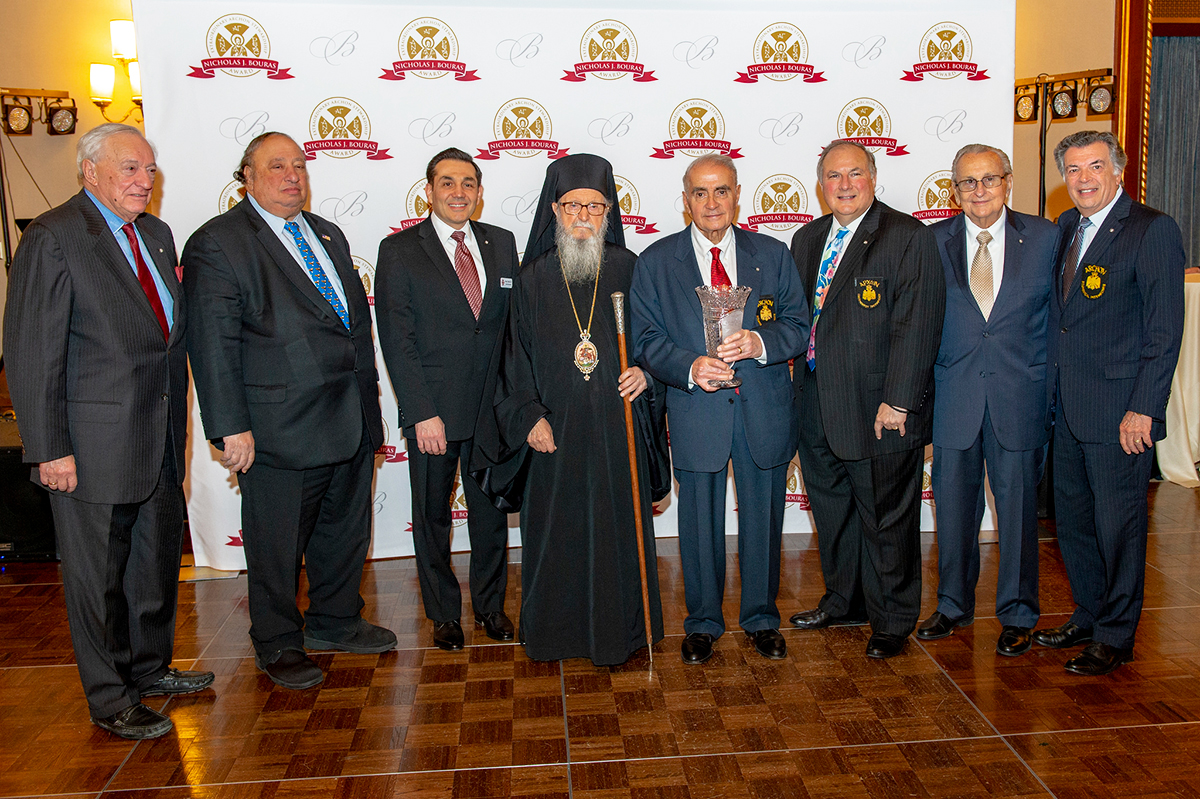 George E. Safiol is presented with the 2018 Nicholas J. Bouras Award for Extraordinary Archon Stewardship on Friday, October 26, 2018 at The New York Athletic Club. He is joined by Archbishop Demetrios, Executive Committee Members and past recipients of The Award. © J. Mindala

George E. Safiol, Archon Archiophylax, is this year’s recipient of The Nicholas J. Bouras Award for Extraordinary Archon Stewardship for his outstanding service to the Orthodox Church as an Archon of the Ecumenical Patriarchate of Constantinople.

The Award was presented to Mr. Safiol on October 26 by His Eminence Archbishop Demetrios, Geron of America and National Commander Dr. Limberakis, in a ceremony at the New York Athletic Club as part of the Order of Saint Andrew the Apostle's annual three-day assembly.

At the ceremony, National Commander Anthony J. Limberakis, M.D., praised Archon Safiol’s “tremendous stewardship of time, talent and resources in support of the Mother Church of Constantinople, the Orthodox Christian Church throughout the United States, and to the mission of the Order of Saint Andrew in which all children of God should be granted religious freedom as a fundamental, inalienable human right.”

“I am personally honored, humbled and happy to receive this Award, particularly considering for whom the Award has been established, Nicholas J. Bouras,” Mr. Safiol said in an interview after the ceremony, adding that he treasured his long friendship with Mr. Bouras, noting they served together on three boards, the Archdiocesan Council Executive Committee, the Archon Council and the Leadership 100 board. Humorously, he added, “he treated me like a kid brother even though I was only ten years younger.”

Safiol was instrumental in launching the $10 million Hellenic College Holy Cross School of Theology Million Dollar a Year Sponsorship Program, which was initiated to provide scholarships to seminarians and address the shortage of priests in America. To date, $18 million has been provided to the school and has resulted in more than 200 ordained priests.

He was also involved in a project at Saint Basil Academy. While he and Mr. Bouras were visiting the academy one day they noticed that the narrow roads serving the academy were in terrible shape with pot holes and ruts. He recalled that Bouras said to him, “We have to do something about this road.” They did. They started a project that repaved the two roads and parking spaces with the road leading to the girls’  dormitory named the Sen. Olympia Snowe Roadway and the one to the boys’ dormitory named the Nicholas J. Bouras Driveway. He recalls the humorous thank you letter they received from the senator, noting that “never in my life has anyone named a roadway after me.”

An Archon since 1997, Safiol has served nearly 20 years on the National Council, including service as chairman of the Audit Committee and the Nicholas J. Bouras Award for Extraordinary Archon Stewardship.

Dr. Limberakis, in presenting the Award, shared an anecdote that occurred in 1997 related to the Nana Mouskouri Concert for Peace in which the first significant donation of $10,000 came from Safiol.

“I did not know Archon George so I gave him a telephone call at his home in Weston, Massachusetts, and expressed gratitude for him offering the very first substantial donation. And we spoke for two hours regarding the future of the Order, our respective visions as Archons and the sacred mission of the Order.”

Safiol is a 1954 graduate of New York University of College of Engineering. He served as a first lieutenant in the U.S. Army Corps of Engineers with distinction. He began his business career at ITT in 1957 where he rose to become vice president and general manager of ITT’s U.S. Telecommunications Division. He subsequently joined General Instrument Corporation  and rose to become senior vice president. He later joined American Biltrite Inc., serving as president, chief executive officer and director. In 1984, he rejoined General Instrument and qickly became president, chief operating officer and director, positions he held until he retired in 1991.

Education has always been important to Archon Safiol. He has been a significant benefactor of New York University and its College of Engineering where he has endowed several scholarship awards. He also serves on the Board of Advisors of the University of Mississippi, a guest lecturer at the Massachusetts Institute of Technology Sloan School of Management, and has been a director of seven industrial/electronic companies. He also has received the coveted Ellis Island Medal of Honor Award.

He was married to Demetra Karambelas Safiol, of blessed memory, for nearly 60 years. They have three married children, Olympia, Peter and Christina, and six grandchildren. Over the years, the Safiol Family Foundation has donated generously to the Orthodox Church and institutions of higher education and medicine.

The Award, established in 2010, honors Mr. Bouras, who served as National Vice Commander of the Archons and is known for his remarkable leadership as a faithful son of the Ecumenical Patriarchate and exemplary steward of the Greek Orthodox Archdiocese of America. Mr. Bouras died in 2013. Past recipients of the award were George D. Behrakis in 2011, James C. Fountas and John Halecky J. in 2012, Stephen J. Yallourakis, M.D. and D.D.S. in 2013, Christopher Stratakis Esq. in 2014, the Honorable Nicholas Tsoucalas in 2015, Theofanis V. Economidis in 2016, and John A. Catsimatidis in 2017.