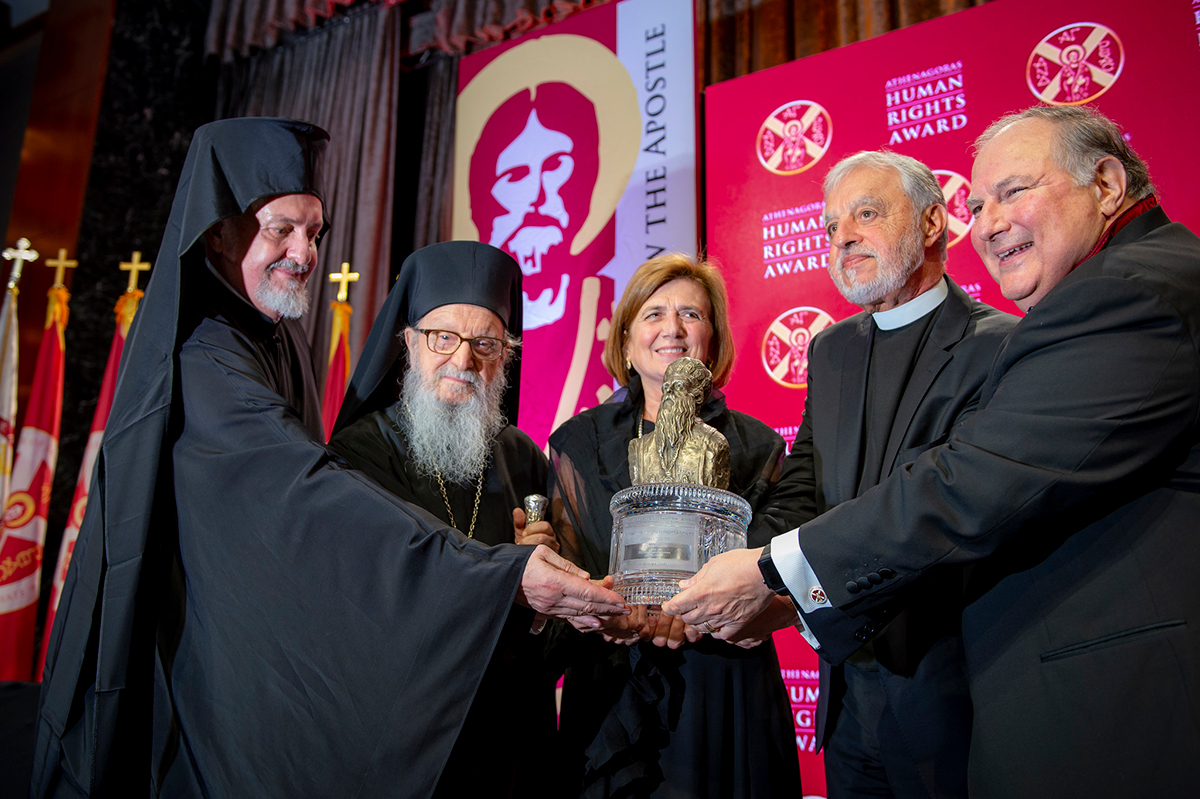 The largest gathering in the half century history of the Archons of the Ecumenical Patriarchate of the Greek Orthodox Archdiocese of America turned out to celebrate this year’s honorees of the Athenagoras Human Rights Award, Father Alexander and Presbytera Xanthi Karloutsos. About 1,300 attended the October 27 banquet held at the New York Hilton Midtown.

Emanuel said that while he had served as master of ceremonies many times before, this night was “extra-special. If, like me, you consider Father Alex to be a spiritual father and mentor, well then you feel tremendous joy that tonight the Order of Saint Andrew is honoring this distinguished and dedicated priest for his decades of service to our beloved Church at all levels, and Presbytera Xanthi for her decades of giving her time and talent to causes greater than self.”

“Being in Washington over the past seventeen years,” said Emanuel, “I’ve heard Presidents from both parties mention Father Alex – a recognition of his talent. And three Archbishops have depended heavily on him over the decades….His focus and determination are legendary.”

Father Alex’s brother James Karloutsos spoke movingly about their early life, and said of his brother: “His accomplishments have been molded by his faith, love, and strong faith in God. That lifelong faith strengthened his commitment and devotion to better the lives of all who seek him out.” He added that Father Alex “serves and respects the poorest of the poor, the richest of the rich, the connected and the unconnected, with the same faith and passion for all, no matter their station in life. He has always had an unwavering respect for human dignity, mimicking Albert Einstein’s words, ‘Try not to become a man of success, but rather, to become a man of value.’”

His Eminence Metropolitan Emmanuel of France, the Personal Representative of His All-Holiness Ecumenical Patriarch Bartholomew, affirmed: “They have never let us down, Father Alex and Presbytera [Xanthi], not even once.” He praised “their spiritual care for every person they have encountered over their decades of service in ministry, from the least, to their parish, to the greatest, in the halls of secular power.”

In a video message recorded for this event, His All-Holiness Ecumenical Patriarch Bartholomew addressed the Order, saying: “You have rightly chosen to recognize and honor the unwavering dedication and selfless service they have demonstrated the last five decades to Orthodoxy in the United States and throughout the entire world…Father Alex has deeply impacted and enriched many souls around the globe in search of spiritual refuge and guidance.”

Archon National Commander Anthony J. Limberakis, M.D., noted the Athenagoras Human Rights Award not only recognizes the impact that an individual or organization has had on the respect for human dignity and religious freedom in our world, but it also bears the name of a great Ecumenical Patriarch, and one who was as well, a great Archbishop of our Holy Archdiocese of America.

“There isn’t a person in this room who is unaware of the historic and monumental decision of the Ecumenical Patriarchate to heal schisms in Ukraine and once and for all bestow upon the long-suffering and noble Ukrainian people their independence and birthright of autocephaly,” Dr. Limberakis said. “We know what the Mother Church is up against and as Archons of the Ecumenical Patriarchate, Defenders of the Faith, we have, we are, and we will continue to stand at Her side in this battle for religious freedom.”

As the Archons engage on behalf of the Ecumenical Patriarchate in what Limberakis termed “this fight for the freedom and self-determination of Ukraine and, just as important, the canonical rights and prerogatives of the Ecumenical Throne granted by the seven Ecumenical Councils, there are no better comrades in arms than Father Alex and Presbytera Xanthi.”

Limberakis also spoke of “the extraordinary labor of love that has enabled the Saint Nicholas Shrine to rise like a phoenix from the ashes at Ground Zero.” He assured the audience that the shrine will be completed and that Father Alex and Presbytera Xanthi will get this done.

In his response to receiving the Award with his wife, Father Alex replied, “Although we are not the most worthy recipients of this Award, we are immensely aware and humbled by its worth. For us, Patriarch Athenagoras was a visionary for our Church in America and the Ecumenical Patriarchate. The infrastructure of our Archdiocese, which is the bedrock of all that we enjoy, was bequeathed to us by this prophetic Prelate.

“Even our political ties to the Oval Office began when then Archbishop Athenagoras was called in November 1948 to lead the Sacred See of Saint Andrew as part of the Truman Doctrine and Marshall Plan to keep the First Throne of Orthodoxy from being trapped behind the Iron Curtain and falling into the communist hands of Stalin’s Soviet Union.”

Father Alex emphasized the role his wife has played in his service to the Church:

“Together, my wife Xanthi and I have worked and served in the holy priesthood for over 48 years. While I was processing with Popes and Patriarchs, my unseen co-worker was sorting suitcases at airports; while I was in receiving lines with Presidents and First Ladies at the White House, Presbytera Xanthi was arranging chairs at the State Department; when I celebrate the Divine Liturgy and enjoy the first seat in our Church, my co-disciple takes the last pew to ensure proper discipline in the Narthex and Nave; while I’m the maître de superstar at our Hamptons Greek Festival, my privileged Presbytera is peeling onions, washing pans and baking baklava.

“Without Xanthi, there would be no Father Alex. Everything I have done, or became, I owe to the love my life. That is why, Presbytera, as the songwriter sang, ‘I love you more today than yesterday, less than tomorrow’.”

In her comments to the assembled guests, Presbytera Xanthi expressed her gratitude for the recognition they received, adding “as grand as this evening is, it is even more humbling, because whatever we have achieved together, we did it because it was what we truly believed,” noting that her and Father Alex have been given unique opportunities to serve the Church they love so much.

“Each act of service has been special because of our love for our Ecumenical Patriarchate, and especially His All-Holiness, receiving this honor is really special,” she said. “I remember hearing about the legendary Patriarch Athenagoras since I remember the time I was a little girl and received his blessing while visiting Corfu. He was so impressive and imposing, and to receive this Award with his name and image is so very meaningful to us.”

His Eminence Archbishop Demetrios, Geron of America, Exarch of the Ecumenical Patriarchate, noted that several of the speakers “spoke about joy,” and that “joy is something that characterizes” the Karloutsos family, even in the midst of great hardships. A “genuine Christian,” he said, is “filled with the joy of Christ no matter what happens,” and Father Alex and his family epitomize this. Archbishop Demetrios added: “Thanks to his tremendous ability and good cooperation with a number of very able people, we were able to have a dramatic increase in the number of members of Leadership 100.”

Archbishop Demetrios also praised Father Alex for facilitating access to Presidents Clinton, Bush, Obama, and Trump. The Archbishop detailed more of Father Alex’s accomplishments and then asked: “If you hear what you heard so far: Leadership 100, Faith Endowment, liaison to a high level of political, federal and other authorities, Archons, you think immediately, what happened to the family of this person? Here is Presbytera Xanthippe, doing a superhuman work. To take care of the family and giving to Father Alexander the possibility to move…through different levels and kinds of activity. It’s one thing to deal with the Archons, it’s another thing to deal with political authorities, and it’s another thing to deal with extraordinary events like a unique, Holy and Great Synod in Crete.” He also recounted Father Alex’s tireless efforts to rebuild and restore St. Nicholas Church, destroyed in the September 11, 2001 attacks in New York, and make it a beacon of Orthodoxy in New York City and America as a whole.

Dr. Limberakis also expressed his appreciation to “our esteemed Archon George E. Safiol who was honored the previous day with the Nicholas J. Bouras Award for Extraordinary Archon Stewardship.

In addition, the National Commander also expressed his thanks to the generous benefactors of the banquet including the five underwriters, the late Archon Nicholas J. Bouras represented by Archon B. Theodore Bozonelis, Archon John A. Catsimatidis, Archon William P. Doucas, Archon Dean Poll, and Archon Michael G. Psaros, as well as those who contributed to sponsoring this year’s banquet.

“We are pleased to announce we have raised $1.4 million, which will be used exclusively and prudently for the worldwide ministries of the Ecumenical Patriarch,” he said. “We do anticipate establishing the St. Andrew Endowment Fund for our Mother Church of Constantinople with the blessings of the Exarch and the Metropolitans.”

Also announced at the banquet were the 27-member Class of 2018 of Archons of the Ecumenical Patriarchate. The new Archons of the Order of Saint Andrew are: