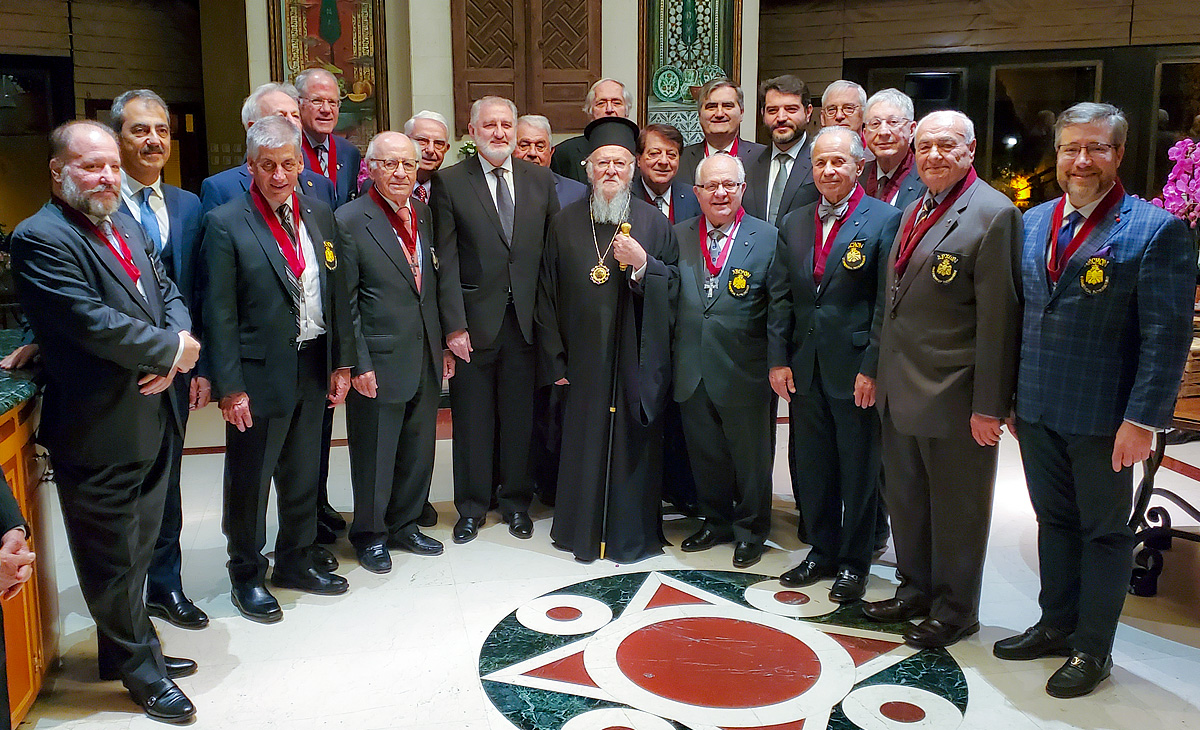 His Eminence Archbishop Elpidophoros of America with Archons as they receive the blessings of His All-Holiness Ecumenical Patriarch Bartholomew.

His Eminence Archbishop Elpidophoros of America from November 17 to 23, 2019 led an Archon Pilgrimage to Constantinople to receive the blessings of  His All-Holiness Ecumenical Patriarch Bartholomew.

On their first full day in Constantinople, Sunday, November 18, 2019, the pilgrims visited Zoodochos Peghe Monastery at Balukli, where the Patriarchal graves of past Ecumenical Patriarchs such as Athenagoras, the former Archbishop of America, can be found. They prayed the Trisagion at his gravesite. The pilgrims also saw the underground shrine of Zoodochos Peghe, the Holy Spring, one of the most famous ancient shrines of Constantinople. Then they visited the Baloukli Home for the Aged.

After that, the pilgrims continued to Panagia Blacherna, the most famous shrine of the Virgin Mary in Istanbul. Then they visited the Church of the Holy Savior of Chora, the second most important Byzantine Church in Istanbul, known for its magnificent mosaics and frescoes. They are by far the most important and extensive series of Byzantine paintings in the city and among the best in the world. Then they went to the famous Grand Bazaar, a maze of over 4000 tiny shops selling gold jewelry, leatherworks and fine carpets.

The following day, the pilgrims enjoyed a full-day private tour of the old city. Their first stop was the Hagia Sophia, the Church of the Holy Wisdom of Christ. It is one of the world’s greatest architectural and spiritual masterpieces and was the Cathedral of the Ecumenical Patriarchate of Constantinople for more than one thousand years. After the tour, they attended Great Vespers at the Ecumenical Patriarchate at Saint George Cathedral to celebrate the Entrance of the Most Holy Theotokos into the Temple. After Vespers, they were granted a private audience with His All-Holiness Ecumenical Patriarch Bartholomew.

At this audience, His All-Holiness told the pilgrims: “Here in the Mother Church of Constantinople there is a concentrated wisdom and the experience of many centuries. We are instruments of divine providence, we ourselves, to carry on this long tradition. And for you, it is an honor and privilege to belong to this First-Throned Church.”

In his address, His All-Holiness once again praised the gifts and abilities of the new Archbishop of America, as well as his willingness to strengthen the links between his Ecclesiastical Province and the venerable Center, reviving the tradition of regular pilgrimage visits to the City.

His Eminence Archbishop Elpidophoros noted that the Archons “have one common characteristic: they’re all devoted to the Ecumenical Patriarchate. They have the fervency of a soldier, but they are not simple soldiers. They are your officers, Your All-Holiness, and they always look at you, your face, to receive your orders, to feel your concerns, for you to show the way for them to follow you…and to do whatever is good for the Mother Church of Constantinople.” He said that the Ecumenical Patriarchate “is the center of faith, the foundation of hope and the source of love for all believers in the United States.” He also expressed his gratitude to the Lord for the valuable time the Archons have devoted to the purposes of the Church and to the support of those in need.

Then on Thursday, November 21, the pilgrims attended the Divine Liturgy at the Ecumenical Patriarchate in celebration of the Entrance of the Most Holy Theotokos into the Temple. After that, they visited to Topkapi Palace and Ayia Ereni within its grounds. It was considered the most important church of Constantinople during the time of Justinian, and before that, the Second Ecumenical Council was conducted there in the year 382.

That evening, the Order of Saint Andrew attended a banquet in honor of His All-Holiness Ecumenical Patriarch Bartholomew at the Four Seasons. At the banquet, His Eminence Archbishop Elpidophoros of America offered a toast to His All-Holiness, saying: “My heart runs over with gratitude and humility on this first trip back to the Queen of Cities as the Archbishop of America. I am humbled by the tremendous honor bestowed by the Great and Holy Synod in my election. And I am grateful to you personally, Your All Holiness, for the confidence you placed in me, and for your wholehearted support of my ministry to the sacred flock in the United States of America—the pre-eminent eparchy of the Ecumenical Throne.”

His Eminence said of the Archons of the Ecumenical Patriarchate: “They have been awarded the title of Archons, and rightly so. For they are leaders indeed, by word and example. Each one, in his own way, brings us closer to the day when the Theological School of Halki is open again; and when all the rights of your Sacred Throne may be exercised without impediment. Another master of men, Napoleon, once said: ‘We only lead the people by showing them a future: a leader is a provider of hope.’ These Archons are leaders in just this way! For they show us a future of freedom, and they provide hope for a era of peace for the Mother Church.”

On Friday, November 22, the pilgrims visited Halki, the home of the renowned Halki Patriarchal School of Theology. St. Photios the Great is believed to have founded the monastery in the late 19th century. His All-Holiness Ecumenical Patriarch Bartholomew and the beloved and late Archbishop Iakovos are among the visionary and outstanding graduates of the School. Presently, the School is closed although there are worldwide efforts to reopen this center of Orthodox learning.

The pilgrims flew home on November 23.