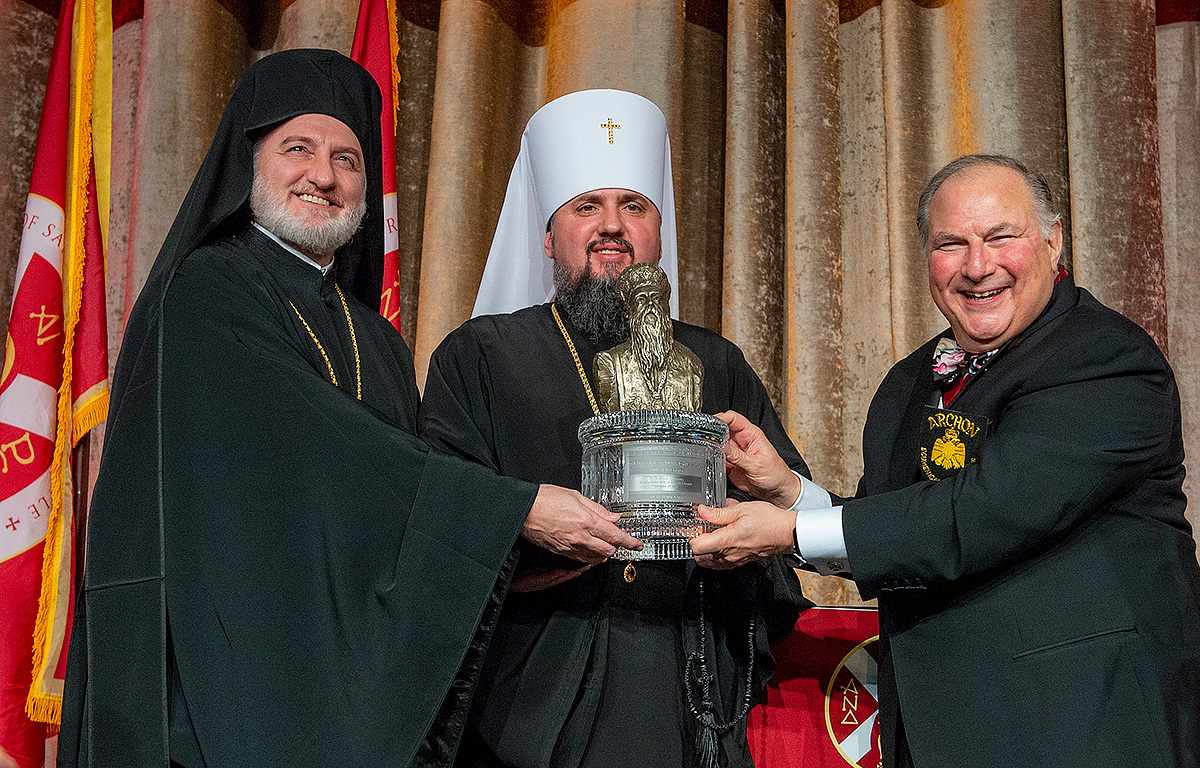 His Beatitude Metropolitan Epiphaniy of Kyiv and All Ukraine is honored with the Athenagoras Human Rights Award by His Eminence Archbishop Elpidophoros of America and National Commander Dr. Anthony J. Limberakis, at the New York Hilton Midtown.
© J. Mindala

His Eminence Archbishop Elpidophoros of America, Exarch of the Ecumenical Patriarchate, together with the Order of Saint Andrew’s National Commander Dr. Anthony J. Limberakis, presented the Athenagoras Human Rights Award to His Beatitude Metropolitan Epiphaniy of Kyiv and All Ukraine during the annual Athenagoras Human Rights Award Banquet held at the New York Hilton Hotel on October 19, 2019, with over 600 Archons and guests in attendance.

In a message commemorating the occasion, His All-Holiness Ecumenical Patriarch Bartholomew stated: “This honor is, as we note, rightful and deserving for the leader of a fledgling Autocephalous Church, which the Mother Church of Constantinople has in its loving concern nurtured for millennia and navigated in recent decades to self-governance and self-determination, just as it has done in many similar circumstances for other Autocephalous Orthodox Churches throughout the world.”

In presenting the Award, His Eminence Archbishop Elpidophoros said: “Tonight we celebrate not only your person, Your Beatitude, but we celebrate as well the Pious and Faithful People of Ukraine, whose aspirations for religious independence and control over their own future and spiritual destiny were realized by the loving, pastoral, and indeed maternal care of His All-Holiness Ecumenical Patriarch Bartholomew and the Holy and Sacred Synod of Constantinople.”

His Eminence added: “Despite the pens that would re-write history, we know very well from which πηγή the Ukrainian Church sprang – the Life-Giving Fountain of the Queens of Cities, Constantinople –  and how it is that Kyiv is the mother of Moscow, and not the reverse! Moreover, we know that the Autocephaly was always received from Constantinople, for those Local Churches that came into existence in the Second Millennium of our Faith. These are historical facts that cannot be denied, except by those who choose to willfully live in denial. The Autocephaly has yet to be accepted by the majority of Local Churches, but these delays have ever been. There are enough examples of individualized circumstances where a Local Church has forestalled the Ecumenical Throne. As the Mothers in this room know very well, birthgiving is not an easy matter, and comes with pain and great discomfort, but as our Lord Jesus Christ said of His own Passion: When a woman is in labor, she has pain because her hour has come. But when she has brought forth the child, she no longer remembers her distress because of her joy that a human being is born into the world. (John 16:21)”

In his remarks on presenting the Award, National Commander Limberakis paid tribute to His Beatitude Metropolitan Epiphaniy and declared that “in his person we also honor the faithful Ukrainian People and their struggle for religious independence, self-determination, and the crowning achievement of the Tomos of Autocephaly for the Orthodox Church of Ukraine.” Dr. Limberakis noted that “by the grace of God and with the spiritual leadership of Metropolitan Epiphaniy, the centuries old dream of a united autocephalous Orthodox Church in Ukraine is now a reality, and Ukraine is now on the path to a unified Orthodox witness for this noble and historic Orthodox People. Critical to this path of unity for the Orthodox Church of Ukraine was the actual granting of the Tomos of Autocephaly, the certificate of autocephaly if you will, issued earlier this year by the Ecumenical Patriarchate, under the inspired leadership of the spiritual father of us all, His All-Holiness Ecumenical Patriarch Bartholomew.”

Dr. Limberakis asked: “Ladies and gentlemen, brother Archons, why has the Order of St. Andrew taken such a strong position in support of autocephaly for Ukraine? Why did we sponsor an International Townhall Conference Call in support of Autocephaly? Why did the Order publish an eBook on the historical and canonical underpinnings of Ukrainian Autocephaly and why did the Order in fact, select His Beatitude to receive the highest Orthodox Christian recognition in America, the Athenagoras Human Rights Award? It’s simple: the Ecumenical Patriarch has the prerogative and the responsibility of granting autocephaly status to local churches based on Canon 28 passed by the Fourth Ecumenical Council in Chalcedon in 451, that’s 1568 years ago! And we as Archons must defend that prerogative, as WE are THE Defenders of the Faith…. That’s who we are and that’s what we do!”

Accepting the Award, His Beatitude Metropolitan Epiphaniy stated: “If this award were for me alone, I would hardly dare to accept it, as I do not consider myself worthy to be placed among the ranks of the eminent persons and institutions who have been so honored in the previous thirty years. However, I do accept it, gratefully, not as a reward for me personally, but as a mark of the fruition of the work of hundreds of thousands - and even millions - of Ukrainian Orthodox believers in the Motherland and in the Diaspora. The Local Ukrainian Orthodox Church, fifteenth in the Diptych of Sister Churches, is the youngest to be proclaimed, but is ancient and glorious in its history. This Church, the Primate of which I was by Grace of God elected by decision of the Unification Council held on December 15, 2018, is the fruit of the long work, efforts, prayers and struggles of many generations of God-fearing ancestors, hundreds of hierarchs, many thousands of priests, and its millions of believers.” View full remarks

Established in 1986, the Athenagoras Human Rights Award is given in honor of Ecumenical Patriarch Athenagoras, who served as Archbishop of the Americas for 18 years before being elected Ecumenical Patriarch in 1948. He was universally acknowledged as a visionary leader and worked for peace among Churches and people throughout his life. Previous recipients include His Eminence Demetrios, former Archbishop of America; His Eminence Iakovos, former Archbishop of North and South America; His Beatitude Anastasios, Archbishop of Tirana, Durres, and All Albania; Father Alexander and Presbytera Xanthi Karloutsos; former President Jimmy Carter; former President George H. W. Bush and First Lady Barbara Bush; former Vice President Joseph Biden; New York Governor Andrew Cuomo; Nobel Laureate and former Soviet leader Mikhail Gorbachev; Nobel laureate Elie Wiesel; Mother Theresa of Calcutta; and numerous other champions of human rights.