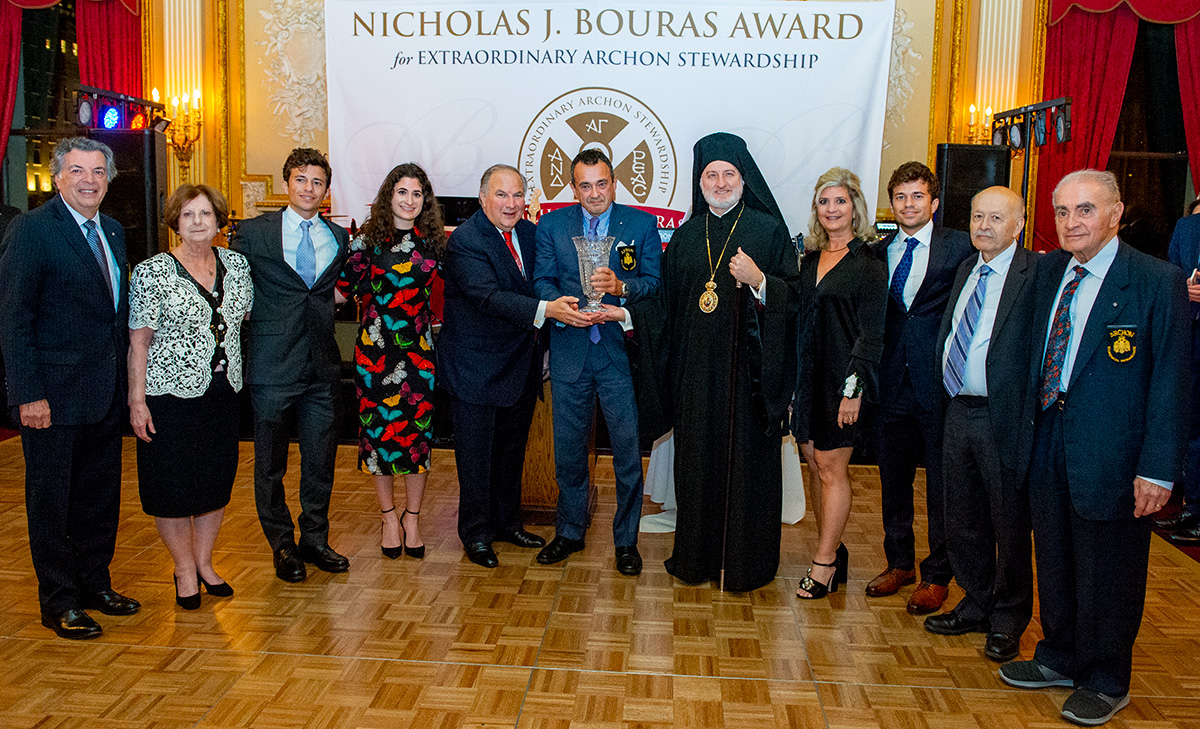 John Socrates Zavitsanos is joined by members of his family as he is honored with the Nicholas J. Bouras Award for Extraordinary Archon Stewardship by His Eminence Archbishop Elpidophoros of America and National Commander Limberakis.
© J. Mindala

John Socrates Zavitsanos, Archon Ekdikos, is this year’s recipient of The Nicholas J. Bouras Award for Extraordinary Archon Stewardship for his outstanding service to the Orthodox Church as an Archon of the Ecumenical Patriarchate of Constantinople.The Award was presented to Archon Zavitsanos on October 18 by His Eminence Archbishop Elpidophoros of America and the National Commander of the Order of Saint Andrew the Apostle, Dr. Anthony J. Limberakis, in a ceremony at the New York Metropolitan Club as part of the Order of Saint Andrew the Apostle’s annual three-day assembly, Archon Weekend.

In a message commemorating the occasion, His All-Holiness Ecumenical Patriarch Bartholomew noted of the late Archon Nicholas J. Bouras that his “spirit of charity, generosity and philanthropy still resonates deeply within the echelons of your distinguished body, and constitutes the noble ethos that each of you aspires to attain and exemplify.” His All-Holiness continued: “Indeed, for more than fifteen years, Mr. Zavitsanos has embodied and promoted these qualities in both his service to the Church and to the community at large. As an accomplished lawyer and prominent attorney in the state of Texas, he has represented numerous individuals over the years, many times without accepting any monetary compensation in return. He has exhibited a great amount of zeal and enthusiasm in upbuilding and enhancing the induction process of new Archons, so that in deepening their knowledge and understanding of the Great Church of Christ, a stronger bond may then be forged between them. He has even offered his services on an international level—beyond the borders of his local community—in order to aid the Ecumenical Patriarchate’s pursuit to reclaim the historic Prinkipo Greek Orphanage, and to raise awareness on the basic human and religious rights of Christians in the Middle East.”

At the ceremony, His Eminence Archbishop Elpidophoros stated: “By your faithful διακονία in the Order of Saint Andrew, Archon John, you have demonstrated your worthiness to join the ranks of George Behrakis, the first recipient, and all the others including our Vice Chairman of the Archdiocese Council John Catsimatidis, and last year’s honoree, George Safiol. Your philanthropic offering is worthy of the memory of Nicholas J. Bouras, and the excellence of your life and work speak of your humility and graciousness in living up to your high calling in Christ.”

National Commander Anthony J. Limberakis, M.D., praised Archon Zavitsanos’ “tremendous stewardship of time, talent and resources in support of the Mother Church of Constantinople, the Orthodox Christian Church throughout the United States, and to the mission of the Order of Saint Andrew in which all children of God should be granted religious freedom as a fundamental, inalienable human right.”

Archon Zavitsanos’ daughter Anastasia noted that he “believes in the basic rights and freedoms of every human being, and vocalizes and lives that truth, even when it could be dangerous for him...His resume is unbelievable. He’s created the Sponser A Day Program, raising over one million dollars for the Order. He’s helped reclaim an orphanage for the Ecumenical Patriarchate, after successfully suing the government of Turkey. He’s a member of Leadership 100. He’s helped the Annunciation Cathedral in Houston in so many ways, but especially through making it one of the largest stewardship programs in the country.”

“I am personally honored, humbled and happy to receive this Award,” Mr. Zavitsanos said in an interview after the ceremony, “particularly considering for whom the Award has been established, Nicholas J. Bouras.”

Archon John Zavitsanos was invested an Archon of the Ecumenical Patriarchate in 2004. In 2007, he was elected to the National Council. Since then, he has worked to help enact efficiencies and updates in Archon administration and policies.

The National Commander appointed Archon Zavitsanos to chair the Exarch’s appeal committee in 2014. He dramatically changed the program by creating the Sponsor A Day Program— which more than doubled the annual contributions. In 2019, the pledged contributions for the first time finally covered the full budget of the Order. Archon Zavitsanos initiated the Archon Bootcamp in 2017 to train Archons-elect regarding the serious responsibilities they will have going forward to defend the Holy Mother Church. In 2019, he helped revamp the Archon selection process and move it from appointment to an application process, so as to assure that all new Archons do not simply view this as a lifetime achievement award and fully understand the duty and service they promise to provide.

Archon Zavitsanos was also on the committee that hosted Religious Freedom Conferences in Brussels and in Washington, D.C. The summits focused on the persecution of Christians in the Middle East and Turkey. Archon Zavitsanos was also on the international team that assisted with the representation of the Ecumenical Patriarchate in the European Court of Human Rights in Strasbourg, France. The Ecumenical Patriarchate successfully sued the government of Turkey and reclaimed an orphanage it had owned for hundreds of years just outside of Istanbul. The victory over this largest wooden structure in all of Europe was unanimous and precedent setting. He is also a member of Leadership 100.

He has also used his legal skills to help others pro bono, like the nuns of Saint Paraskevi Greek Orthodox Monastery in rural Texas who needed help after the monastery basement flooded. Archon Zavitsanos helped secure millions in their full construction costs to remediate the damage done.

He has served his Houston, Texas community outside of the church as well. He has been a board member of the Houston Lawyer Referral Service and has worked on many pro bono cases over the years, including working on a prisoner abuse case that at that time was one of the largest settlements with the state of Texas. Archon Zavitsanos also was a board member of the Menil Art Museum’s Byzantine Fresco Chapel in Houston. He was also stewardship chairman of his local parish and revamped that program 15 years ago.  The Annunciation Cathedral in Houston now has one of the largest stewardship programs in the country (they collected over $1.5M in 2018). That program now serves as a model for a number of parishes in the United States.

Archon Zavitsanos has been married for 30 years to Joni and has four children. His wife and children all speak Greek. His wife Joni is an artist who focuses on Byzantine iconography like her father Diamantis J. Cassis (also an Archon) before her.

The Award, established in 2010, honors Mr. Bouras, who served as National Vice Commander of the Archons and is known for his remarkable leadership as a faithful son of the Ecumenical Patriarchate and exemplary steward of the Greek Orthodox Archdiocese of America. Mr. Bouras died in 2013. Past recipients of the award were George D. Behrakis in 2011, James C. Fountas and John Halecky J. in 2012, Stephen J. Yallourakis, M.D. and D.D.S. in 2013, Christopher Stratakis Esq. in 2014, the Honorable Nicholas Tsoucalas in 2015, Theofanis V. Economidis in 2016, John A. Catsimatidis in 2017, and George E. Safiol in 2018.