Semi-Annual Report of the Order of St. Andrew for the Archdiocesan Council Meeting

Print Semi-Annual Report of the Order of St. Andrew for the Archdiocesan Council Meeting
Mail

Below is the formal Semi-Annual Report, presented to Archdiocesan Council on June 29, 2020. 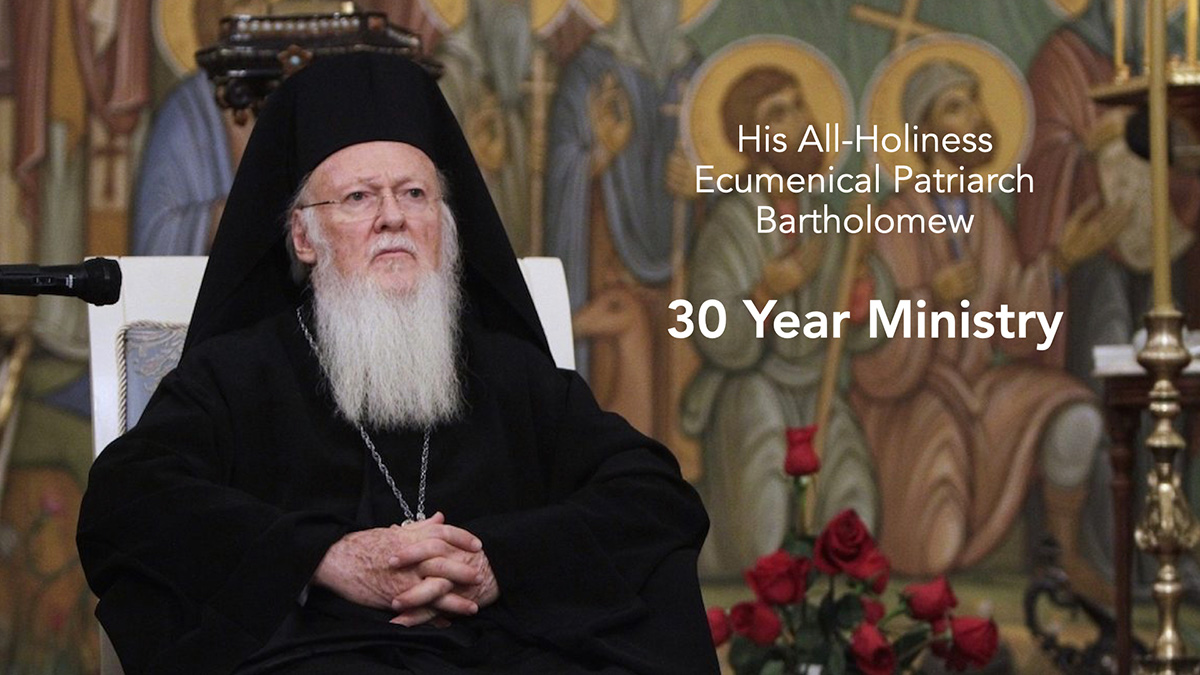 As we approach the 30th Anniversary of the election of His All-Holiness Bartholomew as Ecumenical Patriarch, among the longest serving Ecumenical Patriarchs in the history of Christianity, we offer thanksgiving to our Heavenly Father for his ongoing and extraordinary ministry. The breadth of accomplishment and the degree of impact that this intrepid Ecumenical Patriarch has exhibited is inspirational: preserving the environment, encouraging dialogue among all children of Abraham, granting religious freedom to the worthy faithful of Ukraine by issuing the Tomos of Autocephaly, protecting the Orthodox Christians throughout the world during the COVID-19 pandemic setting forth liturgical guidance respecting and maintaining the traditions of our Orthodox Faith, calling an historic Pan Orthodox Council and working and serving together with three Popes; truly unprecedented and extraordinary feats for the Glory of God! As a lasting and appropriate tribute to His All-Holiness and with the blessings of His Eminence Archbishop Elpidophoros of America, the Order is establishing the BARTHOLOMEW AWARD which will be presented annually in various locations in the United States to an individual who demonstrates international distinction in one of the many ministries of His All-Holiness. 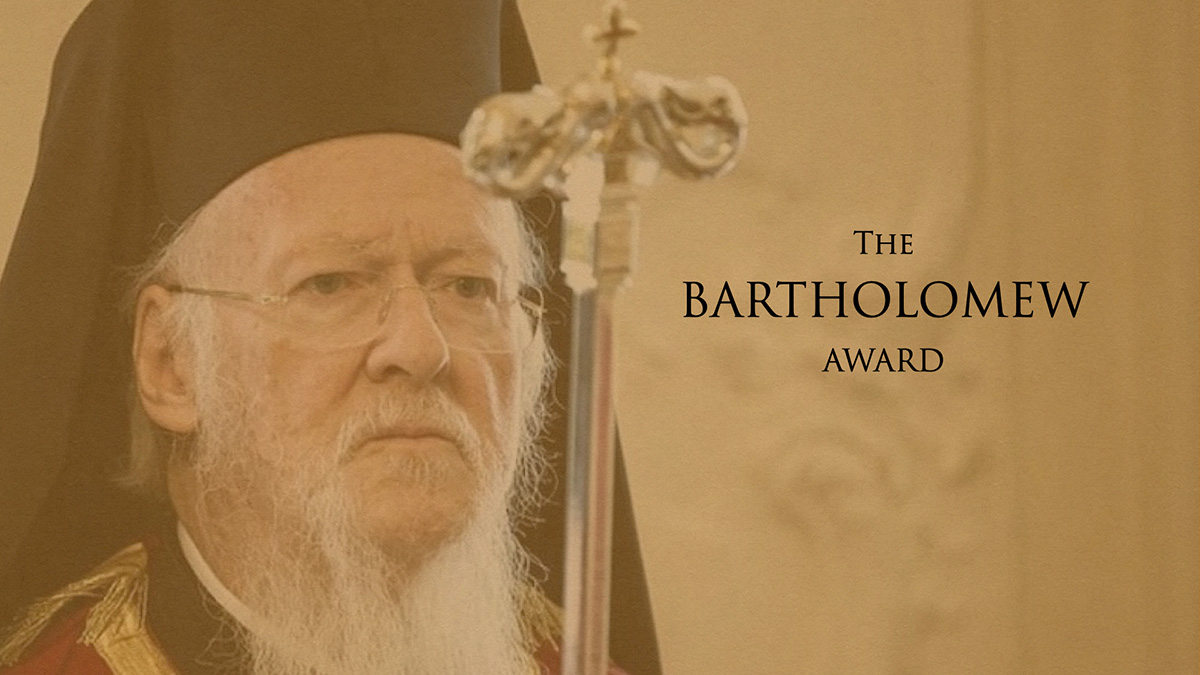 Year two of the Archbishop Elpidophoros ministry of the Holy Archdiocese of America has begun! Now, after a full year of His Eminence’s leadership, it is most apparent that the Church in America is on a renewed course that will be replete with concrete accomplishments. St. Nicholas National Shrine will be completed next year after successfully raising the necessary $45 million dollars (in 45 days)! Hellenic College Holy Cross School of Theology is returning to sound financial footing, as are the financial underpinnings of the Greek Orthodox Archdiocese of America. 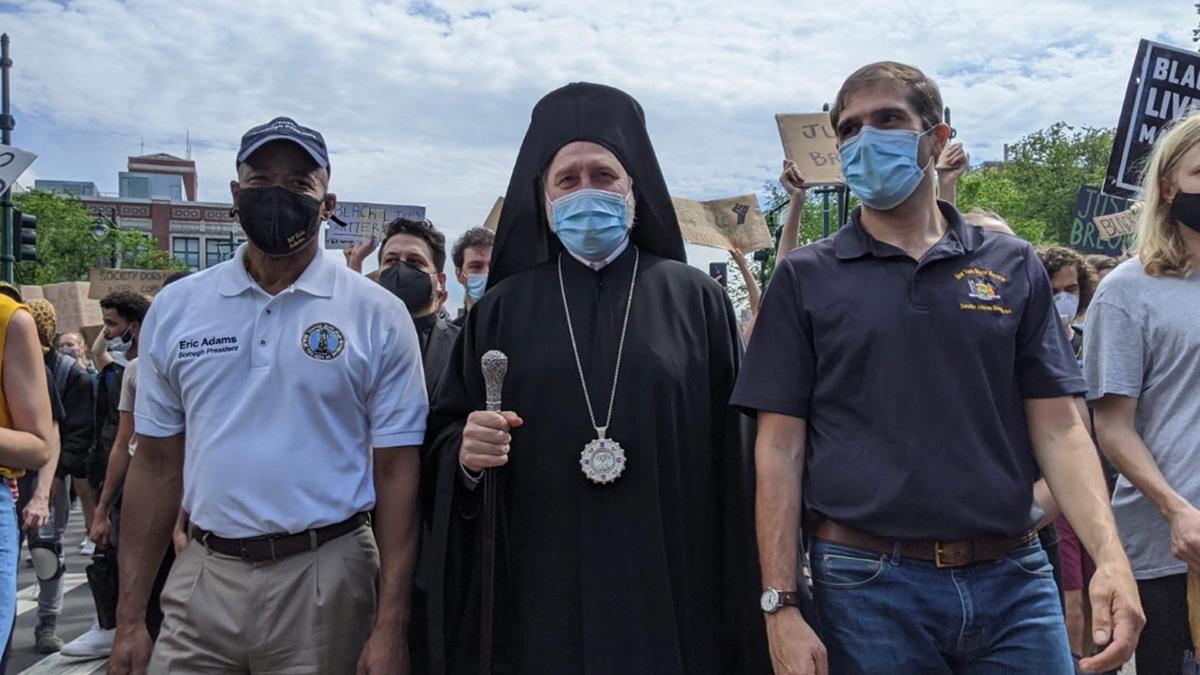 His Eminence marching against racial and social injustice in Brooklyn earlier this month was in the tradition of intrepid Greek Orthodox hierarchs strongly speaking out on these issues beginning with Ecumenical Patriarch Joachim II, when he spoke strongly against slavery during the Civil War in 1862; and Archbishop Iakovos marching in Selma, Alabama with Martin Luther King in March 1965; and His-All Holiness Ecumenical Patriarch Bartholomew thirty years later, in October 1997, visiting the tomb of Martin Luther King, and laying a wreath on the resting place of the slain civil rights leader and Archbishop Demetrios who played an integral role in the National Council of Church’s ACT Now! Unite to End Racism initiative. 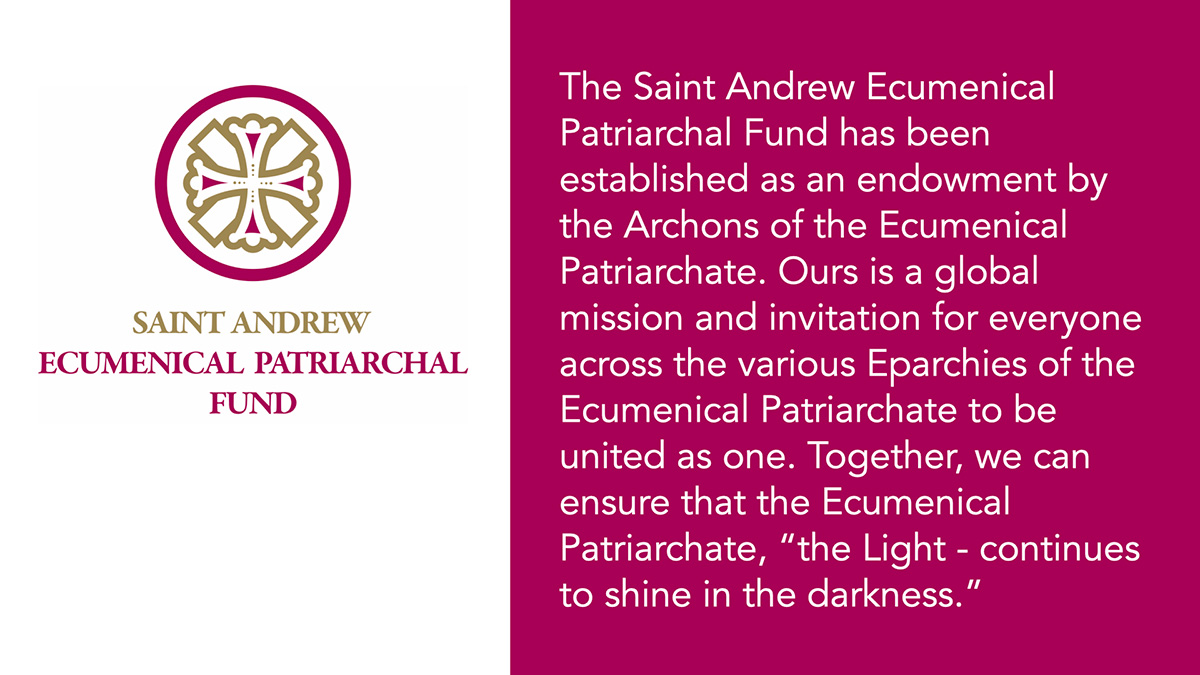 The Order’s activities in the past 12 months have been impactful and significant and in the case of the establishment of the St. Andrew Ecumenical Patriarchal Fund, Inc., historic. The establishment of the St. Andrew Ecumenical Patriarchal Fund, Inc (SAEPF) was a landmark decision of the Order to strengthen the economic foundation of the Mother Church, the Ecumenical Patriarchate of Constantinople. On December 13, 2019, the inaugural meeting of the St. Andrew Ecumenical Patriarchal Fund took place in the Conference Room of the Greek Orthodox Archdiocese of America in New York City in the presence of His Eminence Archbishop Elpidophoros of America, who serves as an official Trustee and representative of the Ecumenical Patriarch. The Board of Trustees comprised of men and women Orthodox faithful will soon launch an international campaign that will fortify the financial security of the Mother Church ensuring it has the funds to continue its worldwide salvific ministry. This historic undertaking represents the formation of the very first charitable entity in the world established exclusively to secure the financial underpinnings of the Spiritual Center of World Orthodoxy. The Fund is incorporated as a Not-For-Profit Corporation in the state of New York. The IRS 501c3 application has been formally submitted and is pending at this time. 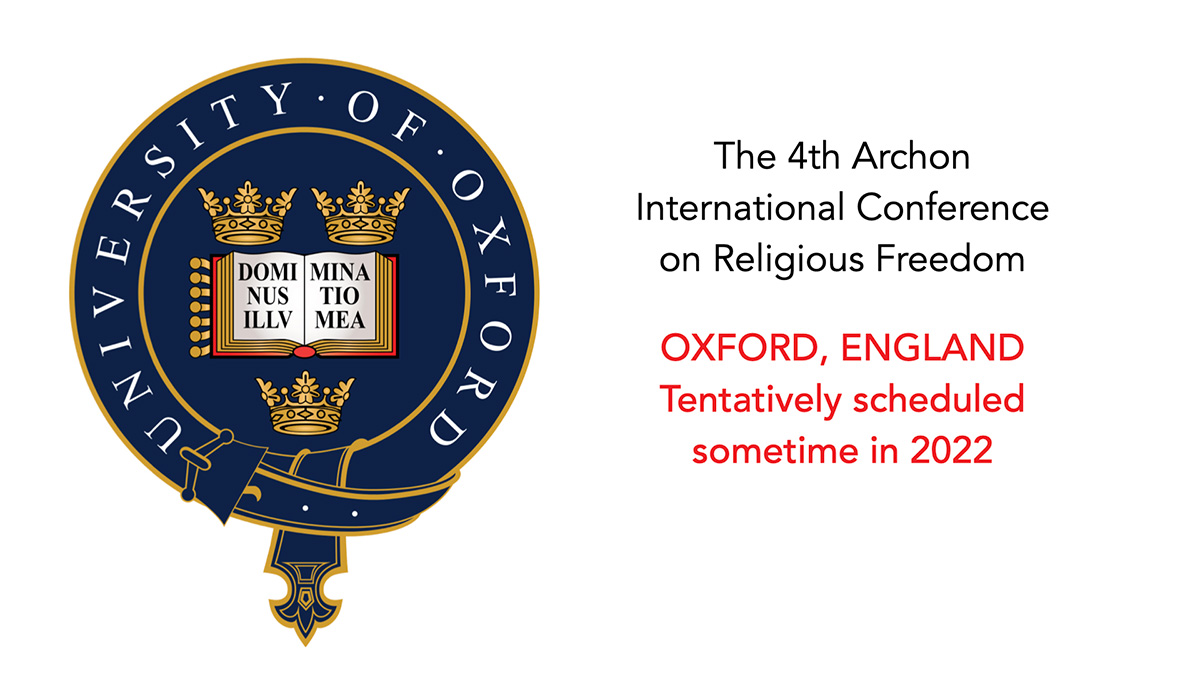 In our continuing efforts to fight for religious freedom and the institutional human rights of the Mother Church, the Order will be organizing its 4th International Religious Freedom Conference, similar to the ones that took place at the European Parliament in Brussels, Belgium (2010), Berlin, Germany (2013) and Washington, DC (2017). The 4th International Conference to be held at Oxford University is scheduled for some time in June or September 2022, as it was rescheduled from 2021 due to the Corona Virus Covid-19 pandemic. Please expect additional updates in the coming year.

As we witness a pandemic of injustice here in the United States and elsewhere, we note that injustice can take many forms. Turkey’s plan to turn Hagia Sophia into a mosque directly challenges the tenets of religious freedom and is an injustice to all Christians. Built in the sixth century by the Byzantine Emperor Justinian, Hagia Sophia was known for nearly a thousand years as the Great Church of Christ. It was the foremost Christian Cathedral in the entire world, and was revered by Christians of all faith traditions, as well as by non-Christians, for its splendor and grandeur, architectural innovation, and beauty. Converting it to an active mosque would represent one more provocative action by the government of Turkey in their ongoing effort to delegitimize the remaining Christian population of Turkey, further eroding their religious freedom, and to obliterate a significant element of the Christian heritage of Turkey and the surrounding region, as well as of the entire world. Converting Hagia Sophia Museum, a UNESCO World Heritage Site to a mosque, would render it the patrimony of one nation, an unjust and confrontational act as this historic site truly belongs to the world. The Order will do everything it can to prevent the conversion of Hagia Sophia Museum, Turkey’s most visited tourist attraction in 2019, into an active mosque. 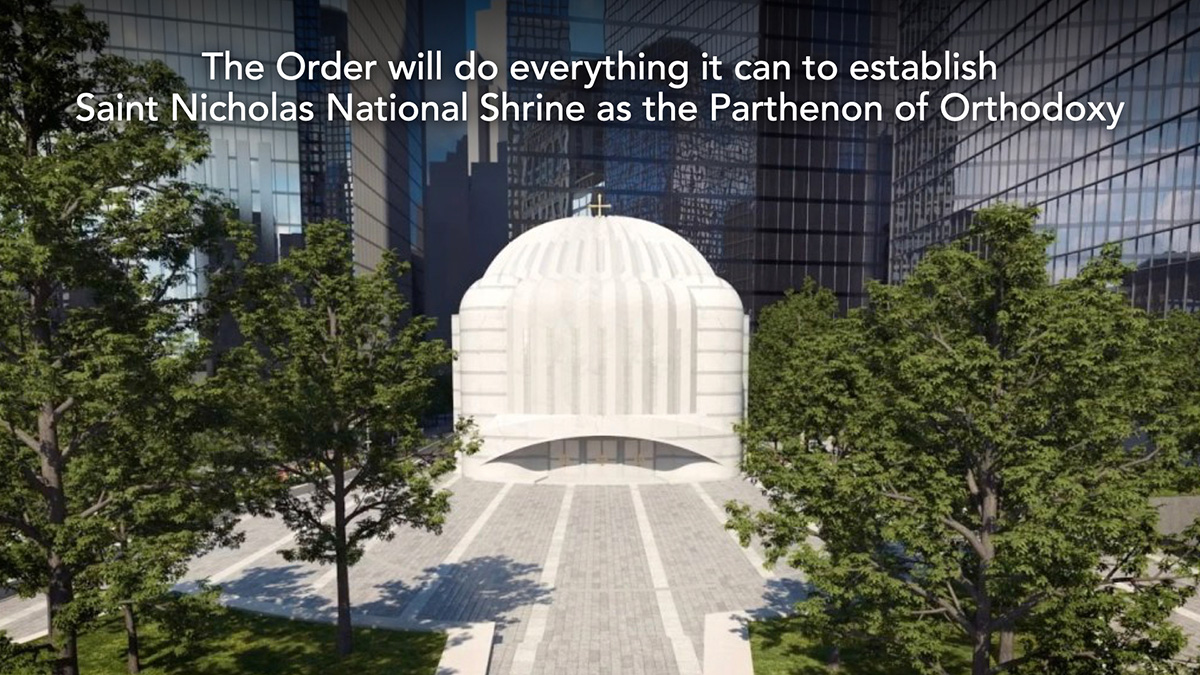 Similarly, but in a most affirmative manner, the Order will do everything it can to ensure the rebuilding of the St. Nicholas National Shrine, with its anticipated Thyranixia in the fall of 2021. The Order offers profound gratitude to His Eminence Archbishop Elpidophoros and his co-workers in Christ, Fr. Alex Karloutsos and Archons Dennis Mehiel, John Catsimatidis, Michael Psaros, The Friends of St. Nicholas Committee and all the Archons and Orthodox Faithful who have contributed their time, talent and treasure to ensure the resurrection of St. Nicholas. In 45 days, $45 million was raised and construction has begun. In many ways, there is a great similarity between the rebuilding of Saint Nicholas National Shrine at Ground Zero and the construction of the renowned Parthenon in Athens. When the Persians sacked Athens in 480 B.C., the first Parthenon was destroyed. But rather than leave it in ruins, the Parthenon was rebuilt by the Greek statesman Pericles, and it still stands today as a monument of the triumph of good over evil, light over darkness, and hope over despair. The rebuilding of Saint Nicholas Church is being undertaken in the same spirit. The original church, in the shadow of the World Trade Center, was destroyed on September 11, 2001. It is now being rebuilt as a new affirmation that love conquers hatred, and that the human spirit is resilient and unconquerable. The Saint Nicholas Greek Orthodox Church and National Shrine will be a new Parthenon of Orthodoxy, a new monument displaying to the world our hope that is in Jesus Christ, and our devotion to the God of love.

The ensuing pages of this Report will serve as a pictorial review of the major activities of the Order and related subjects which include the following: