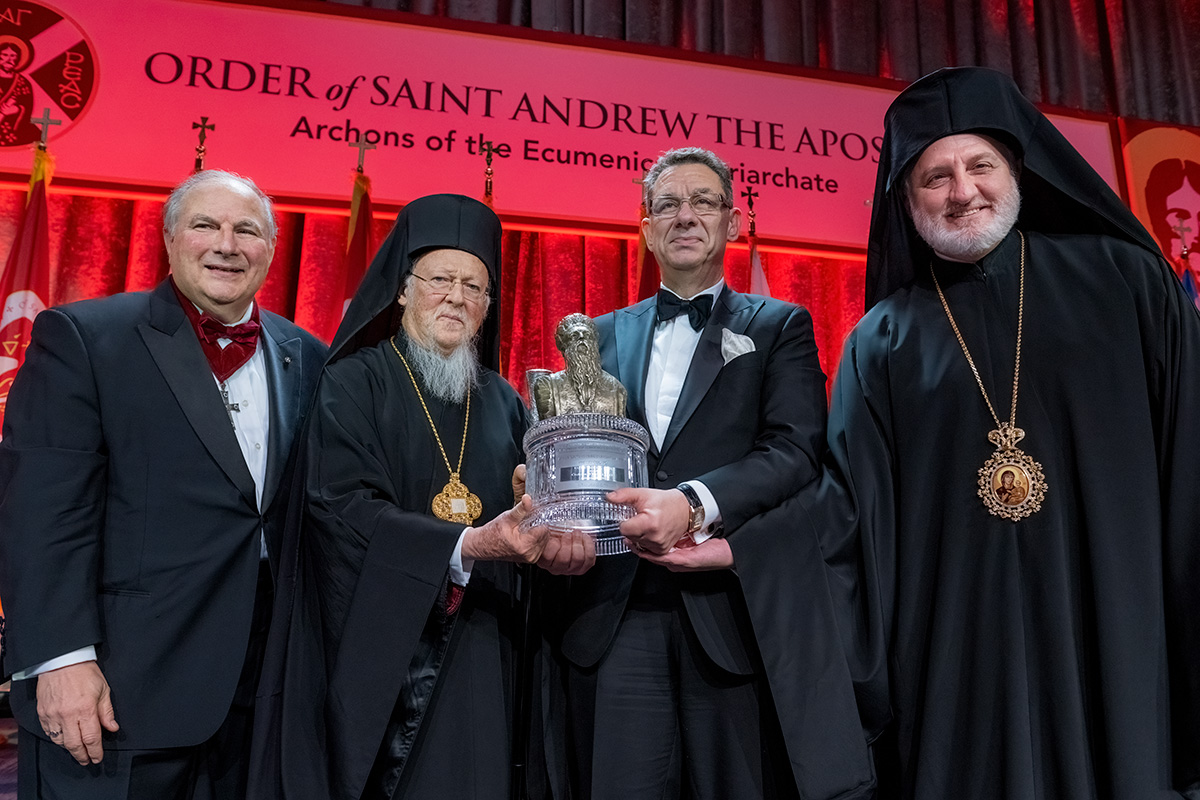 His All-Holiness Ecumenical Patriarch Bartholomew stated: “We join together, in body and spirit, to celebrate the best of humanity – men and women from all walks of life, who have struggled selflessly and sacrificially to combat the severe threat of the Coronavirus pandemic on all levels, ranging from nurses, doctors, and medical professionals who came face to face with the disease, to lawmakers and civil authorities who strove to contain and prevent its spread, to clergymen, academics and notable persons who reminded us of the inestimable value of human life, and of our responsibility towards one another. These people – true exemplars and models – are justly honored by the Order of St. Andrew through the commendation of five leaders of the pharmaceutical and biotechnological fields, each representing thousands of individuals, who all played a vital role in creating the saving vaccine and in preserving the lives of countless beings throughout the world.” 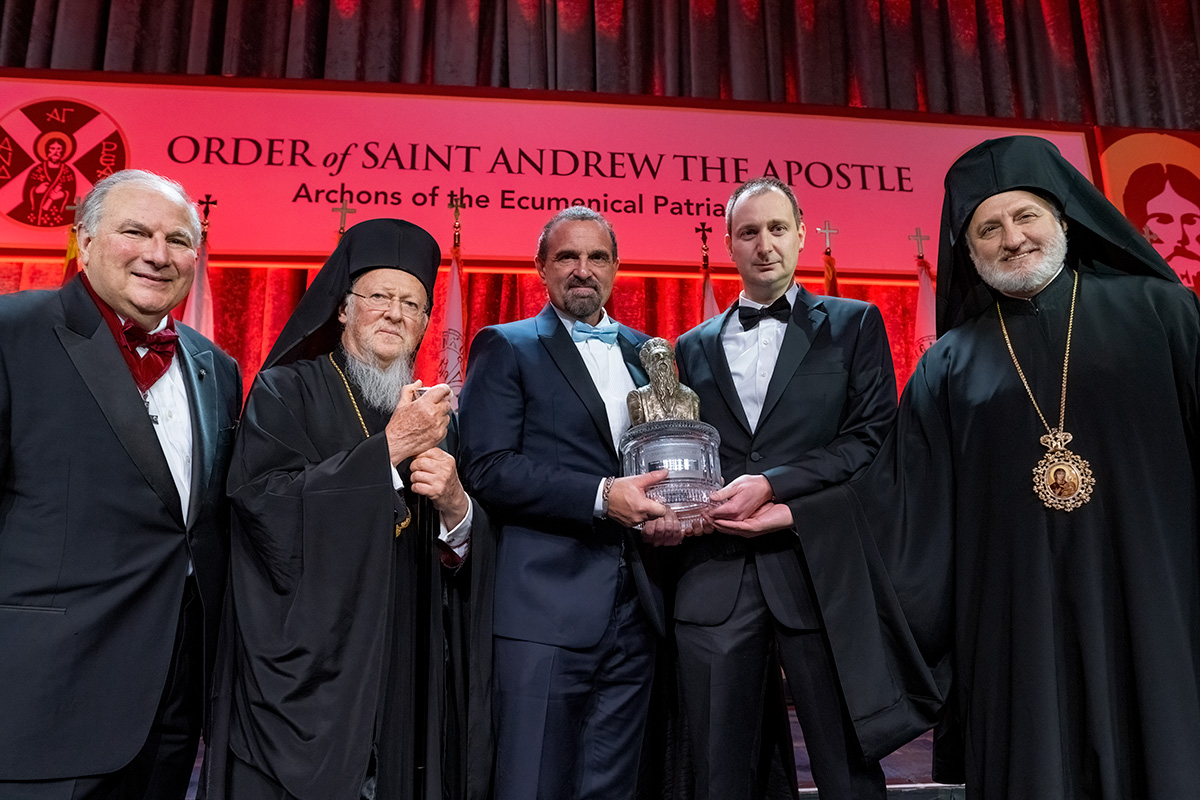 His Eminence Archbishop Elpidophoros said: “It is no accident that our recognition through the Athenagoras Human Rights Award is of distinguished and eminent scientists who have labored to mitigate the deadly effects of the pandemic. These pioneers have made monumental contributions to their own fields, and most importantly, to the global campaign to end the scourge of Covid. Their recognition by the Archons of the Ecumenical Throne demonstrates that what unites the human family is far more significant than accidents of birth and the legacy of ancestry. They also manifest for us the global significance of the migration of peoples to new lands and new opportunities.” 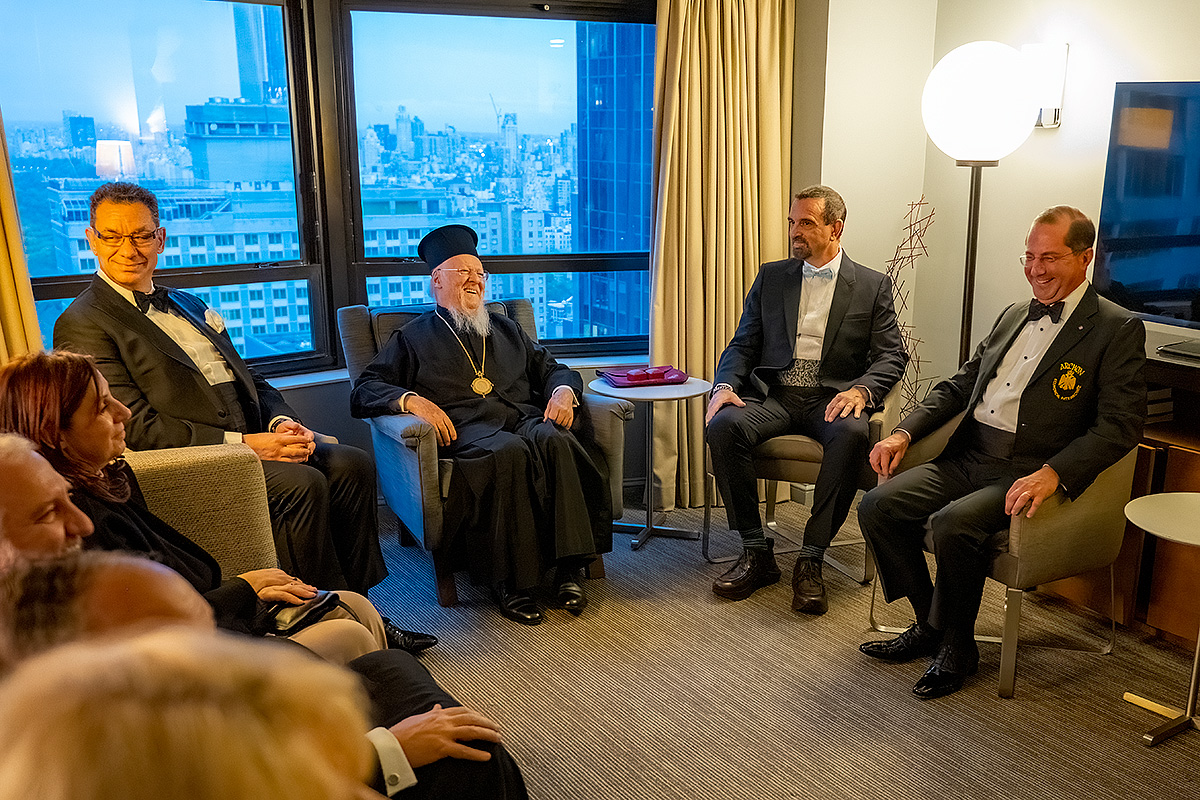 Prior to the Banquet, a moment is shared with the honorees along with the Hon. Archon Alex M. Azar II, far right, who served as Master of Ceremonies.

Dr. Anthony J. Limberakis, National Commander of the Order of Saint Andrew the Apostle, Archons of the Ecumenical Patriarchate, declared that “as a practicing radiologist at Thomas Jefferson University Health System in Philadelphia, every single day I witness daily firsthand the devastation that COVID causes in patient’s lungs on chest x-rays and CT scans. From the early days when there were no lifesaving vaccinations and therapeutics, to the current situation in which the non-vaccinated are primarily the victims of this catastrophic plague, we continue to observe the COVID cataclysm. For extraordinary contributions to the oikoumene by special modern-day Extraordinary Children of Abraham, the Order is honored to present these scientists with the 2021 Athenagoras Human Rights Award through the hands of His All-Holiness Ecumenical Patriarch Bartholomew and His Eminence Archbishop Elpidophoros of America."

Established in 1986, the Athenagoras Human Rights Award is given in honor of Ecumenical Patriarch Athenagoras, who served as Archbishop of the Americas for 18 years before being elected Ecumenical Patriarch in 1948. He was universally acknowledged as a visionary leader and worked for peace among Churches and people throughout his life. Previous recipients include His Eminence Demetrios, former Archbishop of America; His Eminence Iakovos, former Archbishop of North and South America; His Beatitude Metropolitan Epiphaniy of Kyiv and All Ukraine; former Vice President and current President Joseph Biden; former President Jimmy Carter; former President George H. W. Bush and First Lady Barbara Bush; New York Governor Andrew Cuomo; Nobel Laureate and former Soviet leader Mikhail Gorbachev; Nobel Laureate Elie Wiesel; Mother Theresa of Calcutta; and numerous other champions of human rights.

Also, during Archon Weekend 2021, on Saturday, October 30, 2021, Santiago Calatrava, architect of the St. Nicholas Greek Orthodox Church and National Shrine, was the featured speaker at the Archon Agape Luncheon. The internationally acclaimed architect and engineer delivered a multimedia presentation on the architectural evolution and development of the unique design and structure of the National Shrine. Dr. Maria A. Limberakis offered welcoming remarks emphasizing the role of the entire family in the life of an Archon and highlighted the unheralded behind-the-scenes contributions of Presbytera Xanthi Karloutsos to the Order of St. Andrew. Calatrava was presented the “Archon Sophia Award for Excellence: For his inspirational vision in the rebuilding of the Saint Nicholas National Shrine at the World Trade Center grounded on the Holy Wisdom of God.” 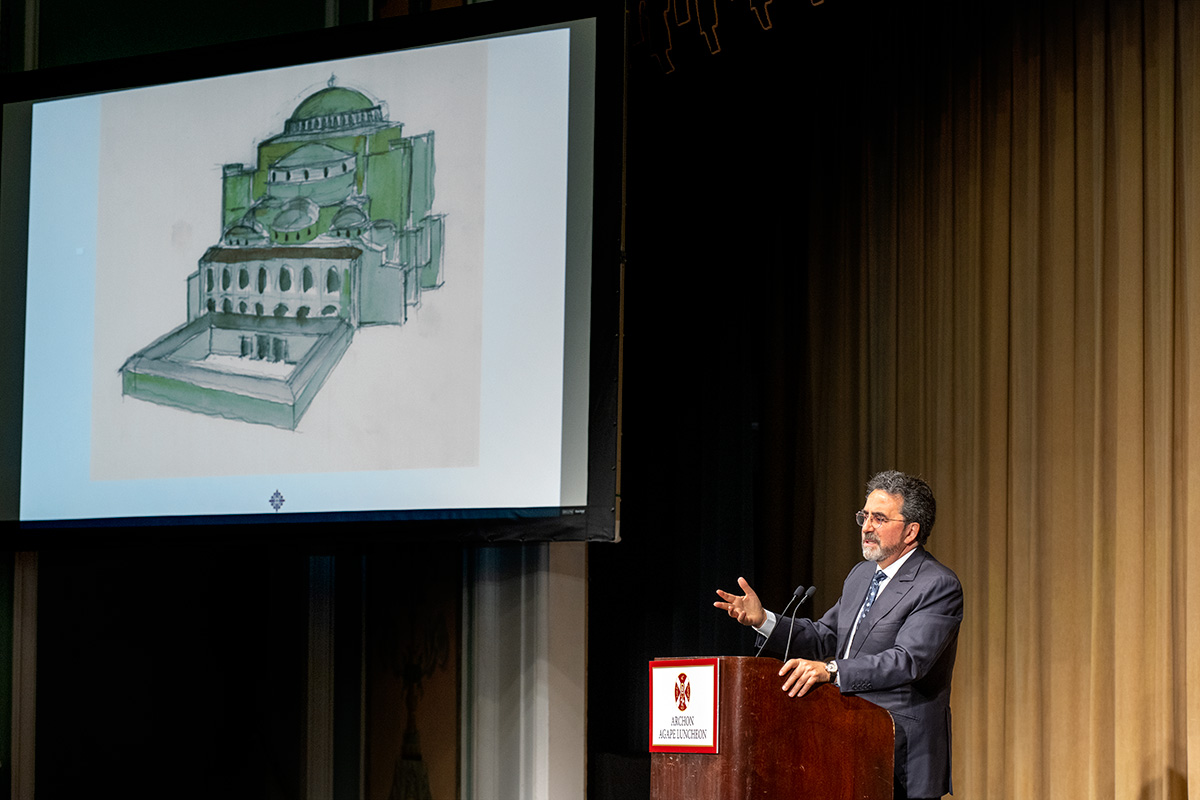 Santiago Calatrava discusses the inspiration that led to the current design of St. Nicholas National Shrine. 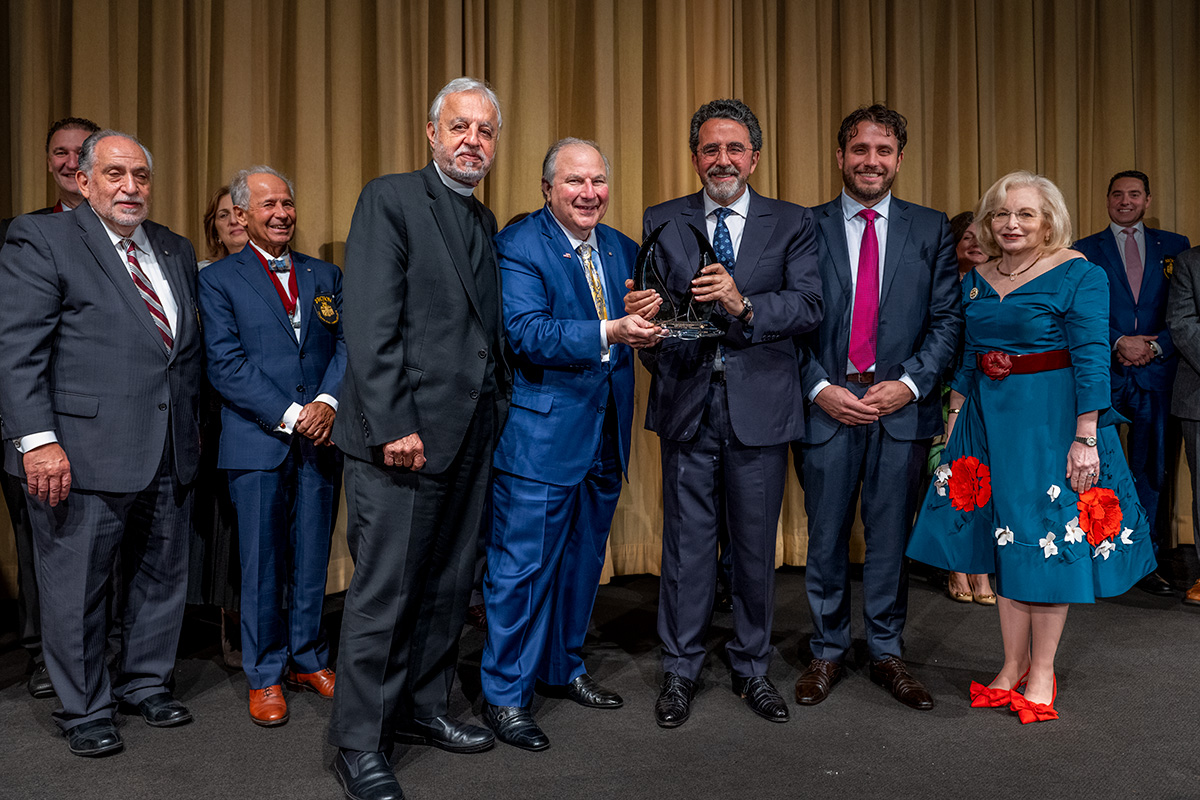 The Archon Sophia Award is presented to Santiago Calatrava for "his inspirational vision in the rebuilding of the Saint Nicholas National Shrine at the World Trade Center grounded on the Holy Wisdom of God."

Other highlights of Archon Weekend 2021 included a joint meeting of the National Council and Regional Commanders of the Order of Saint Andrew on Saturday morning, October 30, 2021where Regional Commanders presented their upcoming programming in their respective Metropolises. On that same day, National Commander Limberakis delivered a multimedia orientation presentation to the Archons-elect classes of 2020 and 2021 on the role and responsibilities they are about to assume as Defenders of the Faith. 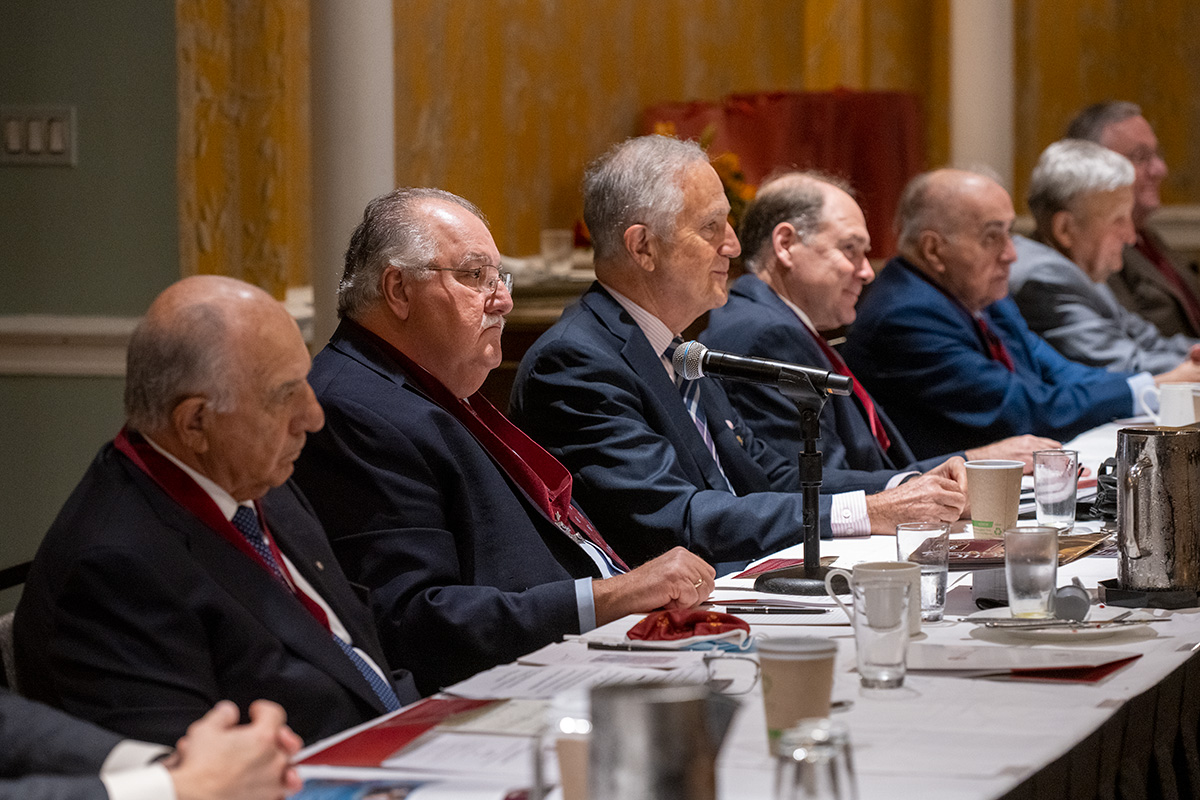 National Council members and Regional Commanders during the Joint Meeting. 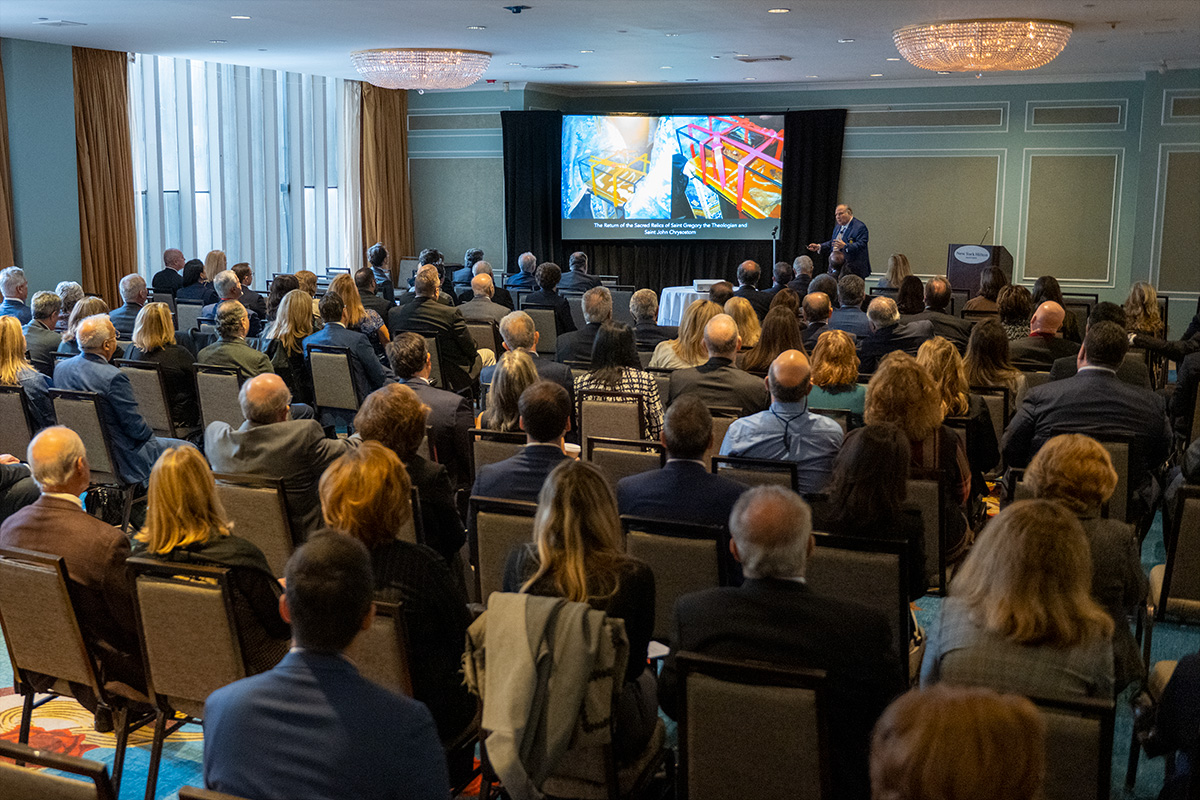