Athenagoras Human Rights Award Bestowed Upon His Beatitude Patriarch Theodore II of Alexandria and All Africa, $350,000 Raised for Missions of Patriarchate of Alexandria

Print Athenagoras Human Rights Award Bestowed Upon His Beatitude Patriarch Theodore II of Alexandria and All Africa, $350,000 Raised for Missions of Patriarchate of Alexandria
Mail 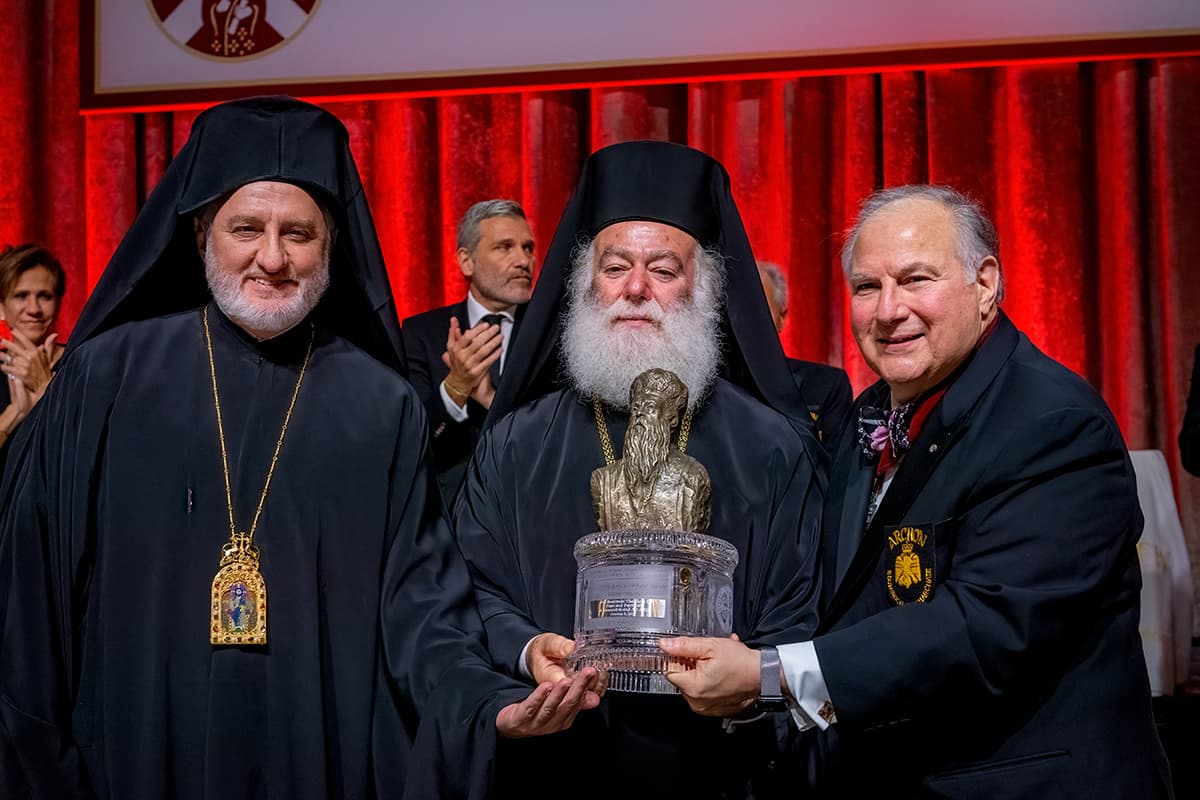 Help the missionary activity of the Church of Alexandria

His Eminence Archbishop Elpidophoros of America, Exarch of the Ecumenical Patriarchate, together with Dr. Anthony J. Limberakis, National Commander of the Order of Saint Andrew the Apostle, Archons of the Ecumenical Patriarchate, presented the Athenagoras Human Rights Award to His Beatitude Theodore II, Pope and Patriarch of Alexandria and All Africa, during the annual Athenagoras Human Rights Award Banquet held at the New York Hilton Hotel on October 8, 2022, with over 600 Archons and guests in attendance.

In a message commemorating the occasion, His All-Holiness Ecumenical Patriarch Bartholomew stated: “It is worthy and right that the Order of St. Andrew is bestowing the Athenagoras Human Rights Award of 2022 to His Beatitude Theodore, Pope and Patriarch of Alexandria and All Africa, in honor of his great contribution to the Church and humankind, as well as his labors in support of the right to religious freedom in Africa, the great continent to which, as His Beatitude our brother says, ‘belongs the future.’” 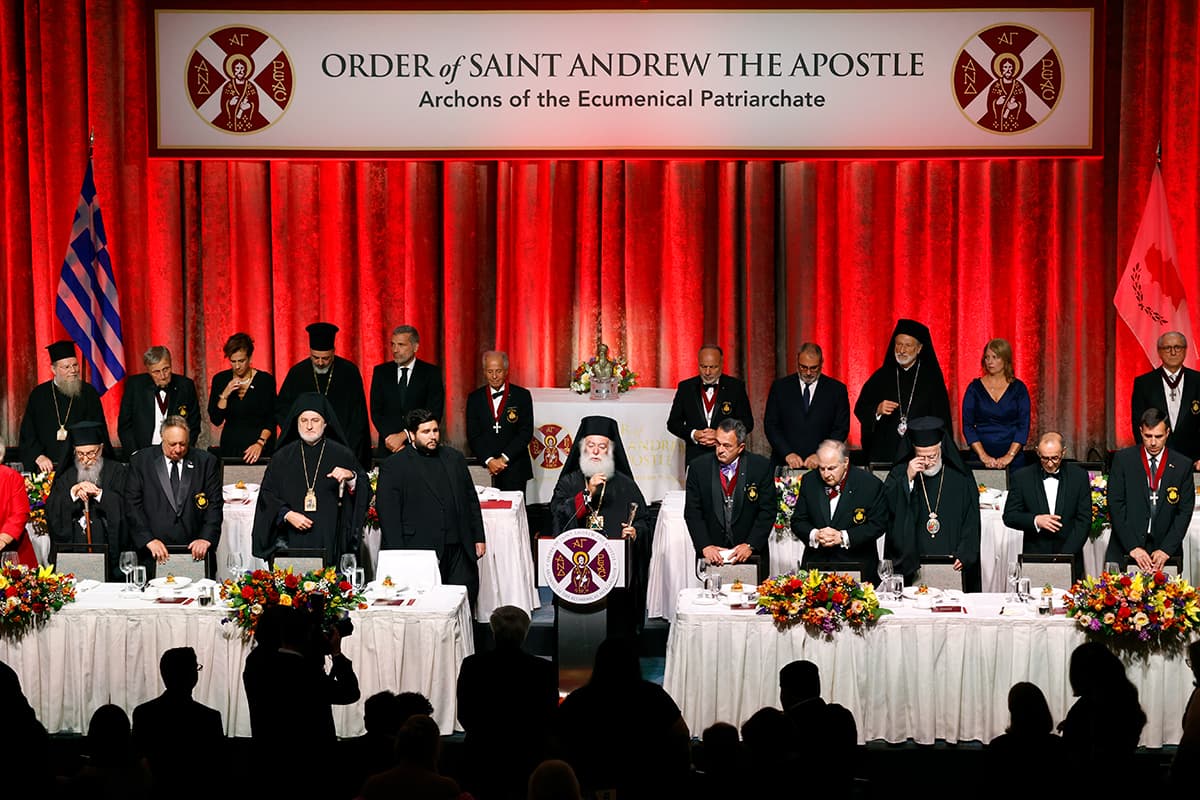 His Eminence Archbishop Elpidophoros stated: “His Beatitude Theodore II, Pope and Patriarch of Alexandria and All Africa, has manifested the very qualities of his Saintly predecessor, the Holy Evangelist Mark. For he has been lion-like in his defense of those who would not only invade and attack his pious flock, but who would disrupt the order of the Church with their innovations.” In his statement upon conferring the award, His Eminence compared His Beatitude to another one of his predecessors in the See of Alexandria, Saint Athanasios the Great, who endured persecution and exile for his defense of the Orthodox Faith. “Our Patriarch Theodoros knows this same persecution,” said His Eminence, “which has been relentless because of His stand for the good canonical order of the Church – supporting the Ecumenical Patriarchate’s decision to grant Autocephaly to the Orthodox Church of Ukraine, and thus, to restore millions of Ukrainians to the Canonical Church."

His Eminence added: “I think it is safe to say that His Beatitude is an admirer of the Slavic tradition; for he has much experience from his time as the Patriarchal Exarch in Odessa. He has had warm relationships with the Ukrainian and Russian Churches. But because of His righteous stance, the Moscow Patriarchate – which is supporting full-on aggression and violence against the Ukrainian People, as well as the illegal seizure of Ukrainian lands by sham elections at gunpoint – has uncanonically invaded the Continent of Africa, which is the complete ecclesiastical domain of the Most Holy Patriarchate of Alexandria.”

Accepting the Award, His Beatitude Patriarch Theodore stated: “I mentally accompany Archbishop Iakovos of North and South America of blessed memory, when he participated in the Selma-Alabama march, shaking the hand of Martin Luther King during the ‘Bloody Sunday’ of 1965. This event did not only become a cover of ‘Life’ magazine, but won forever a place in the heart of every anti-racist and progressive person of his time, here in the American continent, which rightfully boasts of democratic and liberal practices, respects the personality of the other, capitalizes on people’s skills, appreciates possibilities and cultivates chances to benefit the other regardless of religious, racial, social, educational origins and differences. Archbishop Iakovos did not implement a religious type of activism, but gave meaning to his pastorate here with actions full of humanity, understanding, protest in favor of oppressed African-Americans and by extension all those who are deprived of the basics due to their external or internal differences.”

His Beatitude added: “Man throughout history has several times felt that he is a weak, lonely, defenseless being. In order for there to be any form of freedom, rivers of blood were shed, there were conflicts upon conflicts, individuals and peoples fought. The result was not always what was expected. The fact that there are still places around the world where personal or collective rights are violated shows that we have not yet reached the ideal. More efforts are needed toward this end. Recognizing, conceding, exploiting, respecting the rights - especially of the weak – shows love and offers tranquility. Let us hope that our humble words just heard will provoke reflection, suspend fear and banish pain. Please pray that it will be accomplished as soon as possible as I will humbly continue to pray and actually strive hard for it.” 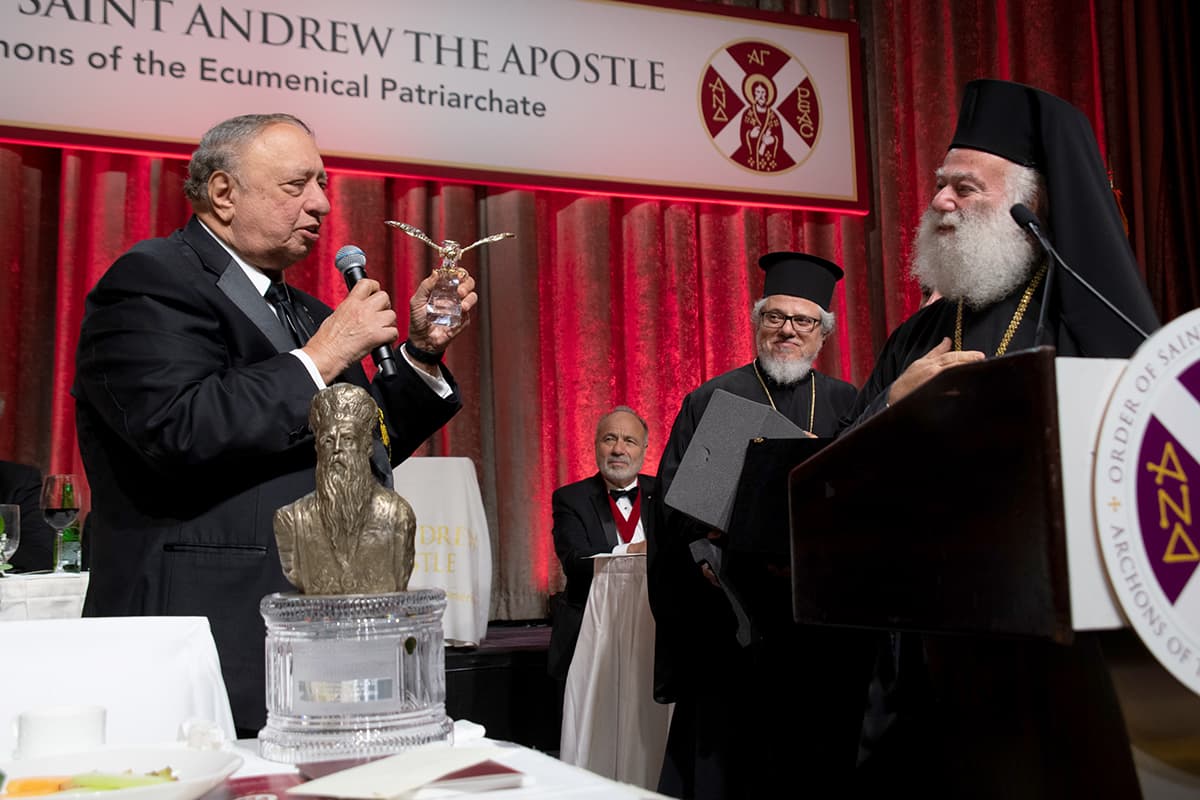 Archon John A. Catsimatidis offer thanks to His Beatitude and pledges a $100,000 donation towards mission work for the Church of Alexandria. (Photo by J. Nelson)

During the Athenagoras Award Gala, $350,000 was raised for the mission activity of the Patriarchate of Alexandria. The Order of Saint Andrew the Apostle gave $100,000, and in a most generous donation of support, Archon John Catsimatidis and the newly elected Archon Tom Makkos each gave $100,000. $50,000 was also donated by an Archon who prefers to remain anonymous. The Order has established a way for additional donations to be made to the missionary work of the Patriarchate of Alexandria. 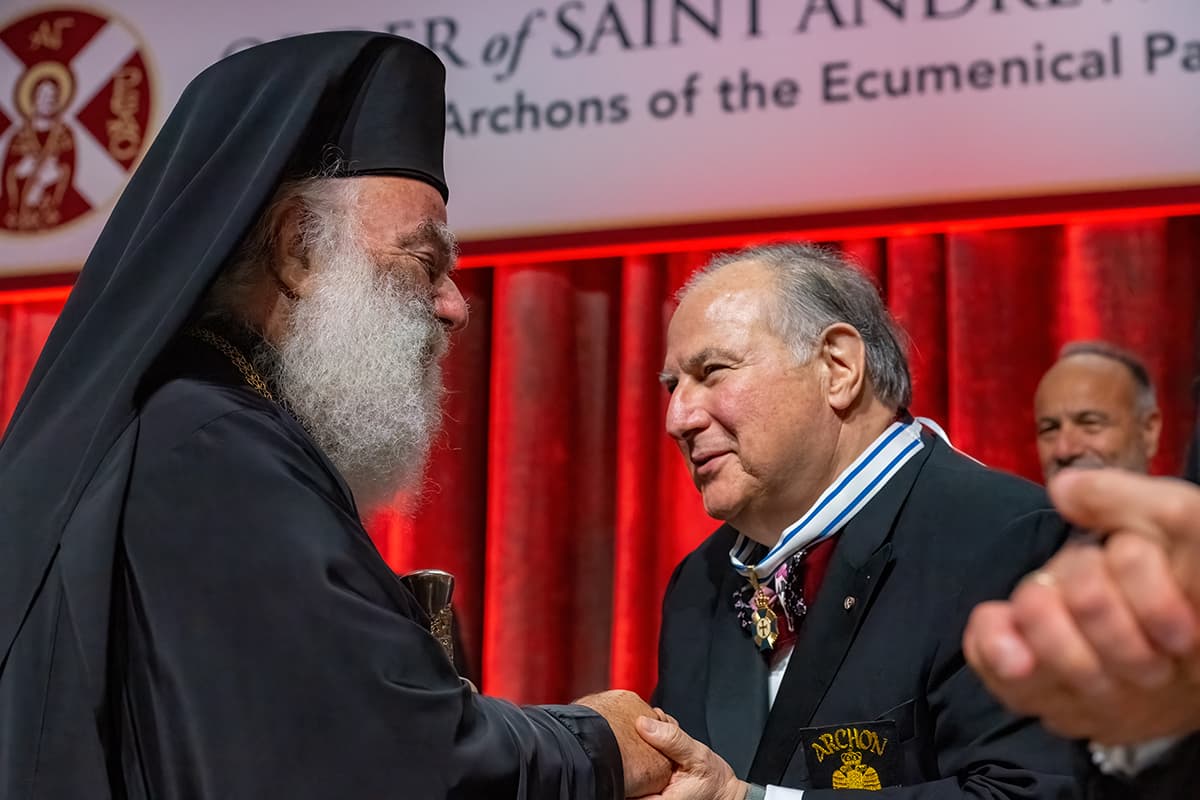 For his part, His Beatitude Patriarch Theodore honored His Eminence Archbishop Elpidophoros and Archon Commander Limberakis by designating them members of the Order of Saint Sabbas the Sanctified, an honor that is conferred by the Patriarchate of Alexandria upon those who have engaged in selfless and tireless service to our excessively needy Orthodox brethren in Africa.

Established in 1986, the Athenagoras Human Rights Award is given in honor of Ecumenical Patriarch Athenagoras, who served as Archbishop of the Americas for 18 years before being elected Ecumenical Patriarch in 1948. He was universally acknowledged as a visionary leader and worked for peace among Churches and people throughout his life. Previous recipients include President Joe Biden (2015 as Vice President); former President Jimmy Carter; former President George H. W. Bush and First Lady Barbara Bush; former Soviet leader Mikhail Gorbachev; Father Alexander and Presbytera Xanthi Karloutsos; Archbishop Desmond M. Tutu; Mother Theresa of Calcutta; and numerous other champions of human rights. View a list of previous recipients.

Help the missionary activity of the Church of Alexandria