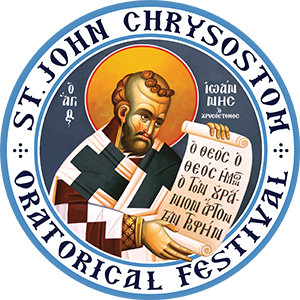 The St. John Chrysostom Oratorical Festival, the acclaimed annual speech competition that is open to Orthodox youth in junior or senior high school, has announced that the first topic of the 2023 competition for the Senior Division will focus on the Ecumenical Patriarchate and His All-Holiness Ecumenical Patriarch Bartholomew. According to His Grace Bishop Athenagoras of Nazianzos, PhD, Director of Department of Religious Education (DRE) for the Greek Orthodox Archdiocese of America, this topic was inspired by the Order of Saint Andrew the Apostle, Archons of the Ecumenical Patriarchate.

His Grace Bishop Athenagoras, who along with his duties as Director of the DRE is Auxiliary Bishop to His All-Holiness Ecumenical Patriarch Bartholomew and Chief Secretary of Holy Eparchial Synod, explained: “The Order of Saint Andrew inspired us this year to have our first speech topic be about the Ecumenical Patriarchate and His All-Holiness for the Senior Division.”

Archon Nicholas Tranto, Chair of the Archon Youth Committee and Regional Commander of the Metropolis of Pittsburgh, stated: “The Order of Saint Andrew the Apostle is humbled and honored that the topic for the Senior Division this year will be the Ecumenical Patriarchate and His All-Holiness Ecumenical Patriarch Bartholomew. This is an important step in allowing our youth and our Omogeneia to be educated about the historical and spiritual significance of the Holy See of Constantinople and the primacy of the Ecumenical Patriarch as ‘the First Among Equals’ and the 269th Successor to the Apostle Andrew.”

With the blessing of His Eminence Archbishop Elpidophoros of America, the DRE has announced that the Metropolis of New Jersey will host the 39th Annual St. John Chrysostom Oratorical Festival Nationals at the St. George Greek Orthodox Church in Clifton, New Jersey on the weekend of June 9 to 11, 2023. This year’s Archdiocesan Chairperson is once again Mrs. Katherine Orfanakos Demacopoulos, beloved wife of the Order's historian, Archon Professor George E. Demacopoulos.

National Commander Dr. Anthony J. Limberakis commented, "I am very proud of my brother Archons who exemplify and who make possible the mission of the Order of Saint Andrew and it's many components that serve the Mother Church including the education of our youth."

The St. John Chrysostom Oratorical Festival is a national program of the DRE where Orthodox youth present speeches discussing the Greek Orthodox faith and the Church. Youth get to explore and deepen their faith and hone their speech writing and public speaking skills. They can also earn an award and possibly a scholarship at the Nationals. The Oratorical Festival centers around faith, education, and fellowship.

Learn More About The Festival