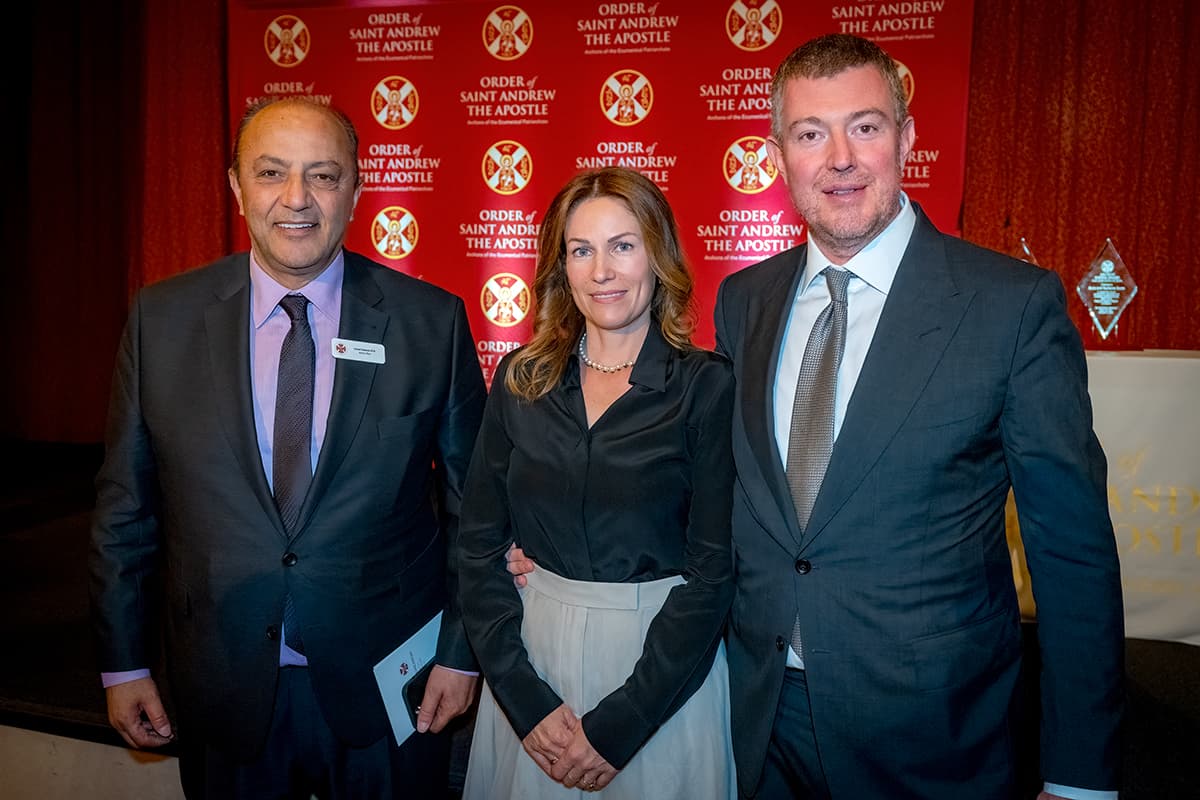 The 2022 recipients of the Archon Sophia Award for Excellence: Archons Dr. Nawaf (and Rim) Salameh and Youlianna and Bouras Gurov. (Photos by J. Mindala)

On Saturday, October 8, 2022, at the Annual Archon Agape Luncheon, the Order of St. Andrew, Archons of the Ecumenical Patriarchate, presented the Archon Sophia Award for Excellence to Archon Dr. Nawaf and Rim Salameh and Archon Boris and Youlianna Gurov. The Sophia Award for Excellence is given annually by the Order to an individual or individuals who have distinguished themselves in endeavors that serve the needs of the Holy Mother Church and the Sacred Mission of the Archons of the Great Church of Christ.

Dr. Maria A. Limberakis, the beloved wife of Dr. Anthony J. Limberakis, National Commander of the Order, presided over the luncheon and offered commentary on the role of an Archon from a family perspective: The 2022 Religious Freedom Mission and the Role of the Archon Family. Dr. Maria Limberakis stated that “Archon-elect Nawaf and Rim Daoud Salameh from Romania and Archon Boris and Yulianna Gurov from Bulgaria exemplify what it means to live a life in service. They are staunch supporters of the Mother Church and our Orthodox Faith in Romania, Bulgaria, and throughout Europe, in regions where the Moscow Patriarchate has tried to undermine the canonical prerogatives of the Ecumenical Patriarchate and destroy Orthodox Christian unity. They have stood firm and supported the Orthodox Church in their respective countries, as well as their brothers and sisters in Ukraine who are victims of an illegal and unjust war, which has been blessed by the Patriarch Kirill of Moscow. On a recent religious freedom mission to Bulgaria and Romania, they embraced our delegation as family. They arranged meetings with the highest level of civil and ecclesiastical authorities, individuals who can further the Archons’ mission of religious freedom.” 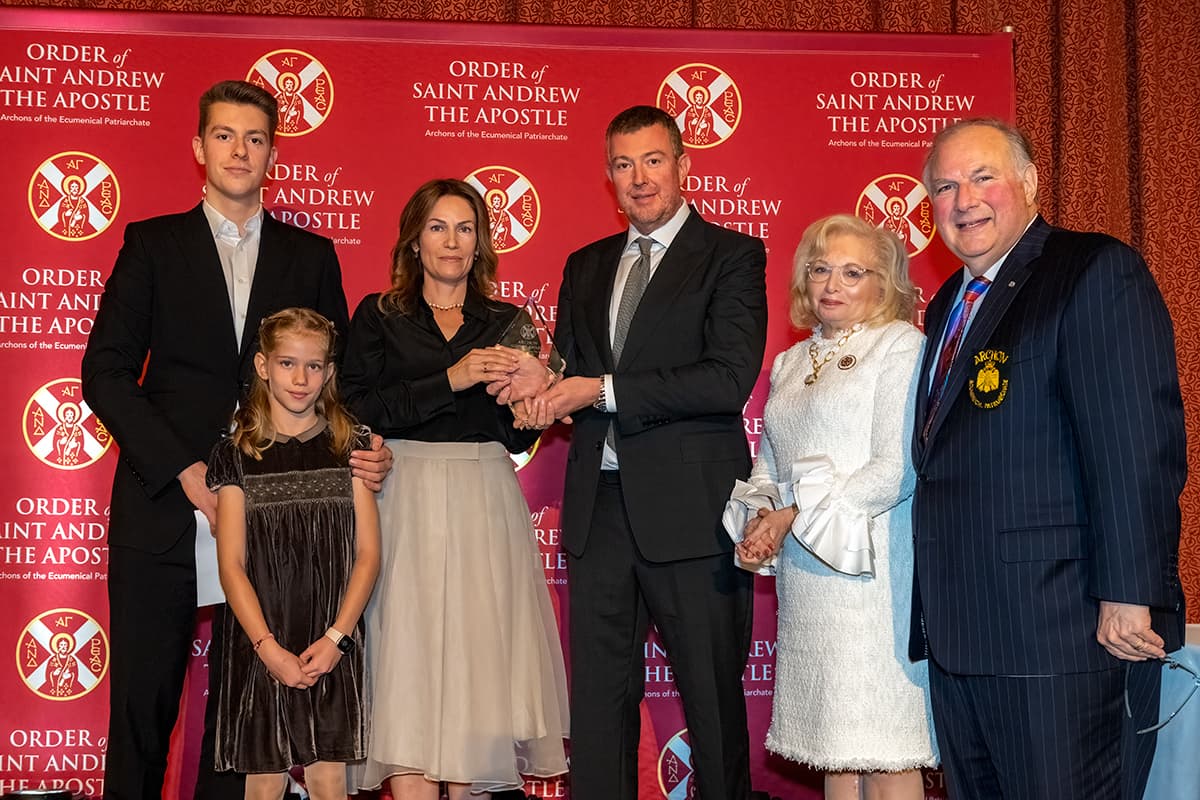 Archon Boris and Youlianna with their children Boris Jr. and Karina receiving the Archon Sophia Award for Excellence.

Dr. Maria Limberakis then invited to the podium Nicholas S. Kass, Executive Director for International Corporate Affairs for the Alexandrion Group and former Deputy Assistant Secretary in the Bureau of Conflict and Stabilization Operations at the U.S. Department of State, and former Director for European Affairs and Director of Intelligence Programs at the White House/National Security Council. Kass stated: “The Salamehs and the Gurovs are being honored today in part for the indispensable service rendered to the Archons, and to the Ecumenical Patriarchate itself, in facilitating a delegation of Archon leaders accompanied by Father Alex [Karloutsos] to Romania and Bulgaria (and Greece). During the visit, the Archon group met with Orthodox leaders, secular officials, and the senior-most American diplomats in these countries. As a former diplomat, I can attest to the ground-breaking nature of this trip, coming as it did at a time of war between the West and Russia in Ukraine.”

Dr. Anthony J. Limberakis, National Commander of the Order of Saint Andrew the Apostle, Archons of the Ecumenical Patriarchate, remarked: “Archons Gurov and Salameh and their beloved wives were essential to the success of our Archon Religious Freedom Mission to Romania and Bulgaria, as well as Greece. The service they rendered to the cause of our Holy Mother Church, and to the protection of religious freedom, cannot be understated. It is for that and so much more that they richly deserve the Sophia Award.” 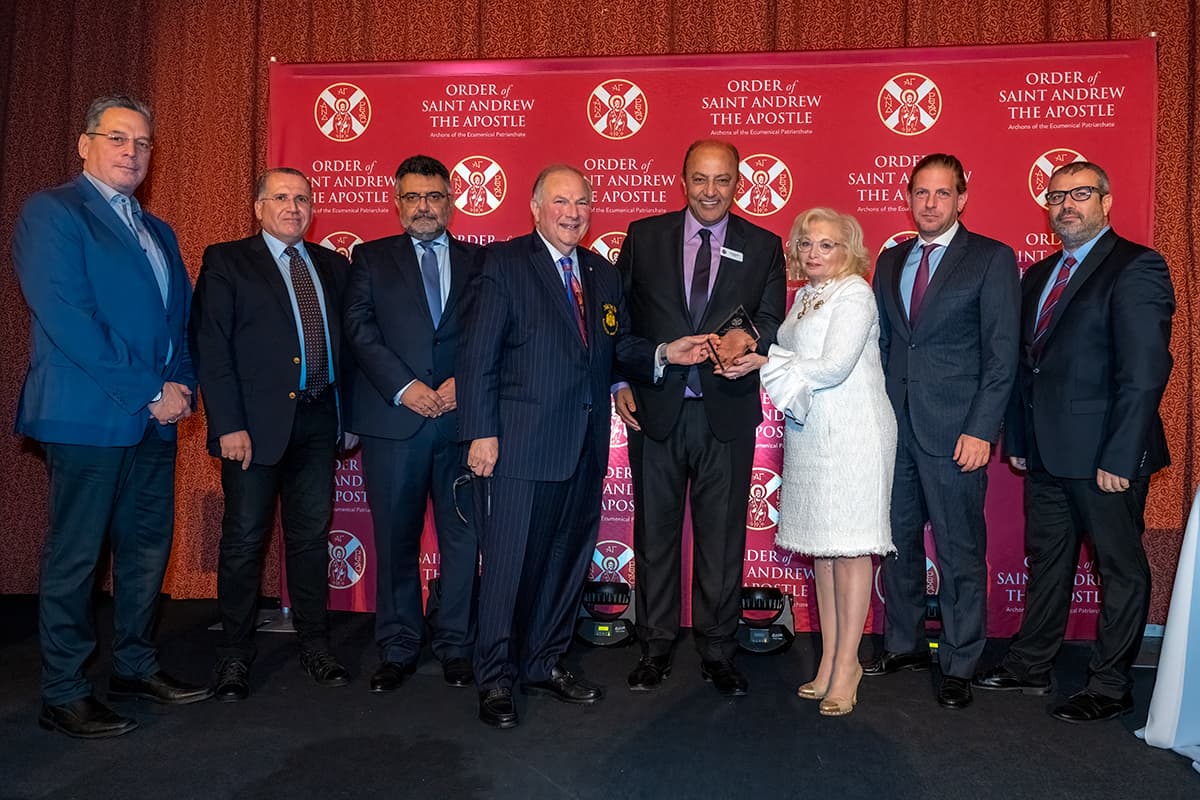 Archon Dr. Nawaf Salameh is a Romanian businessman of Syrian origin, and Founder and Chairman of the Alexandrion Group and NS & Sons Global Investment. In 1983, Dr. Nawaf Salameh moved to Romania to study Medicine. Dr. Salameh is also a Doctor in Military Sciences and Information, holding a Ph.D in Globalization Economics from Carol I National Defense University, Bucharest (2010-2013). He is a specialist in Leading National Security and Defense, a title granted by the National Defense College of Romania, Bucharest (2004-2005). In 2003, Dr. Salameh established the Alexandrion Foundation. An Archon-elect when he received the Sophia Award, Dr. Salameh was invested as an Archon on Sunday, October 9, 2022 and conferred with the Offikion Referendarios.

Rim Daoud Salameh is strongly involved in the projects and initiatives of the Alexandrion Foundation, overseeing all its activities since its set-up in 2003. Three of the major projects organized by the Foundation annually in which Mrs. Salameh has a substantial role are the Constantin Brâncoveanu Awards and Matei Brâncoveanu Gala Awards, as well as the Alexandrion Trophies Gala. Mrs. Salameh holds a degree in Economics from the University of Damascus, Syria.

Archon Boris Gurov is an entrepreneur from Bulgaria who has established business entities in Bulgaria, Austria, and the UK. He was born in Montreal, Canada, where he spent his early childhood years; since the age of thirteen, he has lived in Sofia, Bulgaria. Mr. Gurov holds an MBA in International Relations from the University of National and World Economy in Sofia, Bulgaria. Mr. Gurov is an active member of the Greek Orthodox Community in Europe. In November of 2015, at a ceremony in Brussels, Belgium, His All-Holiness Ecumenical Patriarch Bartholomew granted him the title of Archon Orphanotrophos of the Holy and Great Church of Christ. In March 2021, Archon Boris Gurov and his wife Youlianna Gurova joined the Ecumenical Patriarch Bartholomew Foundation, becoming FOUNDERS.

Youlianna Gurova was born in Sofia, Bulgaria. Her professional experience is within the areas of Logistics and Tax Warehousing, with business establishments in Bulgaria and Austria. Youlianna holds degrees in Psychology from Liberty University in Virginia, and Economics and Public Policy (MBA) from the University of National and World Economy in Sofia, Bulgaria.

The annual Archon Agape Luncheon is a highlight of the Order’s Annual Archon Weekend, which was held in New York City from October 7 to 9, 2022. The Sophia Award for Excellence was inaugurated in 2021 and presented to Santiago Calatrava, the internationally renowned architect who designed the Saint Nicholas Church and National Shrine at Ground Zero in lower Manhattan.

View Photos of the Luncheon