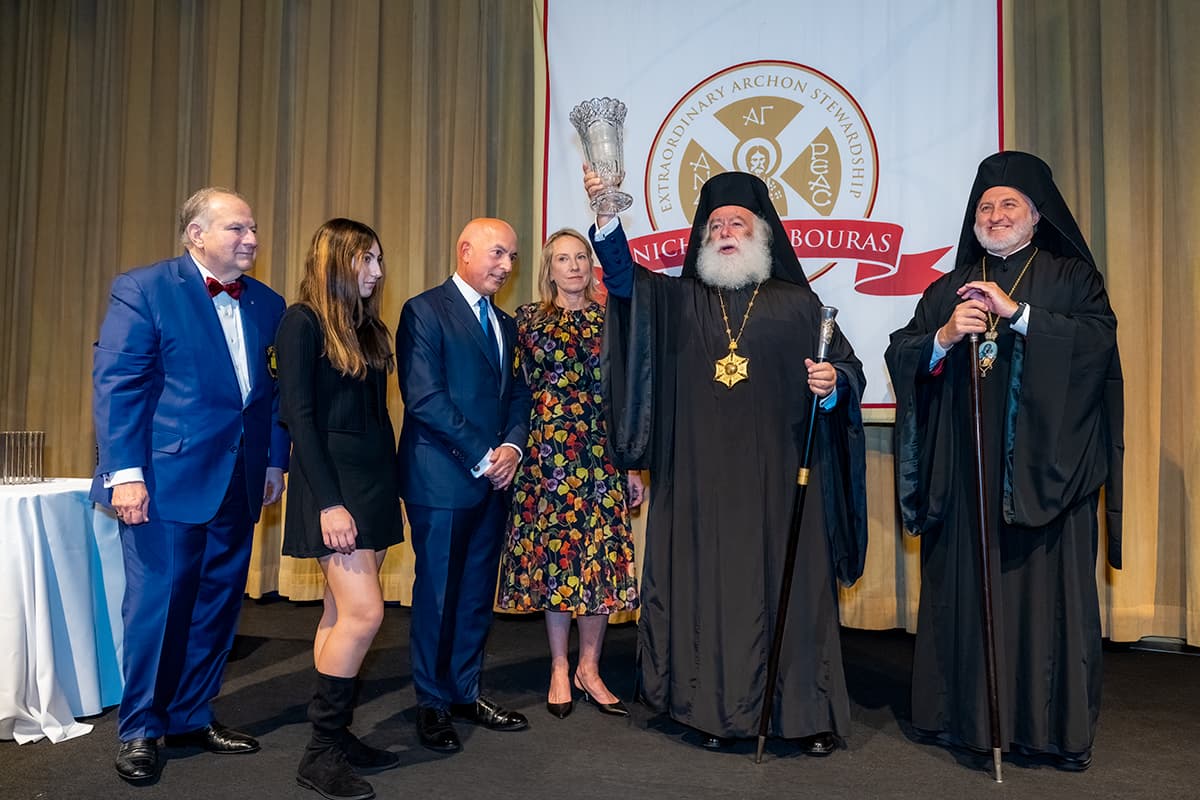 Archon Michael G. Psaros is joined by his wife Robin and their daughter Marina as he accepts the Nicholas J. Bouras Award for Extraordinary Archon Stewardship from His Beatitude Patriarch Theodore II. (Photos by J. Mindala)

Michael G. Psaros, Archon Ostiarios, has received The Nicholas J. Bouras Award for Extraordinary Archon Stewardship for his outstanding service to the Orthodox Church as an Archon of the Ecumenical Patriarchate of Constantinople. The Award was presented to Archon Psaros on Friday, October 7, 2022, in the presence of His Beatitude Theodore II, Pope and Patriarch of Alexandria and All Africa, by His Eminence Archbishop Elpidophoros of America and Dr. Anthony J. Limberakis, National Commander of the Order of Saint Andrew the Apostle, Archons of the Ecumenical Patriarchate, at the Bouras Award Dinner during the Order's annual Archon Weekend at the New York Hilton Hotel in New York City.

In a special message commending the selection and congratulating Archon Psaros, His All-Holiness Ecumenical Patriarch Bartholomew stated: “Through his faith, devotion, and dedication to the Mother Church, Archon Michael has shown himself to be the exemplification of the very best in filial piety, a pietas worthy of Aeneas himself. His many benefactions to the Ecumenical Patriarchate, to the Order of Saint Andrew, to the Holy Archdiocese of America, and to the Saint Nicholas Greek Orthodox Church and National Shrine, all manifest a deep love and commitment that exceeds even his extraordinary success in industry. Archon Michael, represents the very best of what it means to be an Archon – a leader among the Holy and Great Mother Church of Constantinople….Together with his beloved wife Robin and children, Archon Michael G. Psaros is lighting the way to a brighter tomorrow for our Church.” 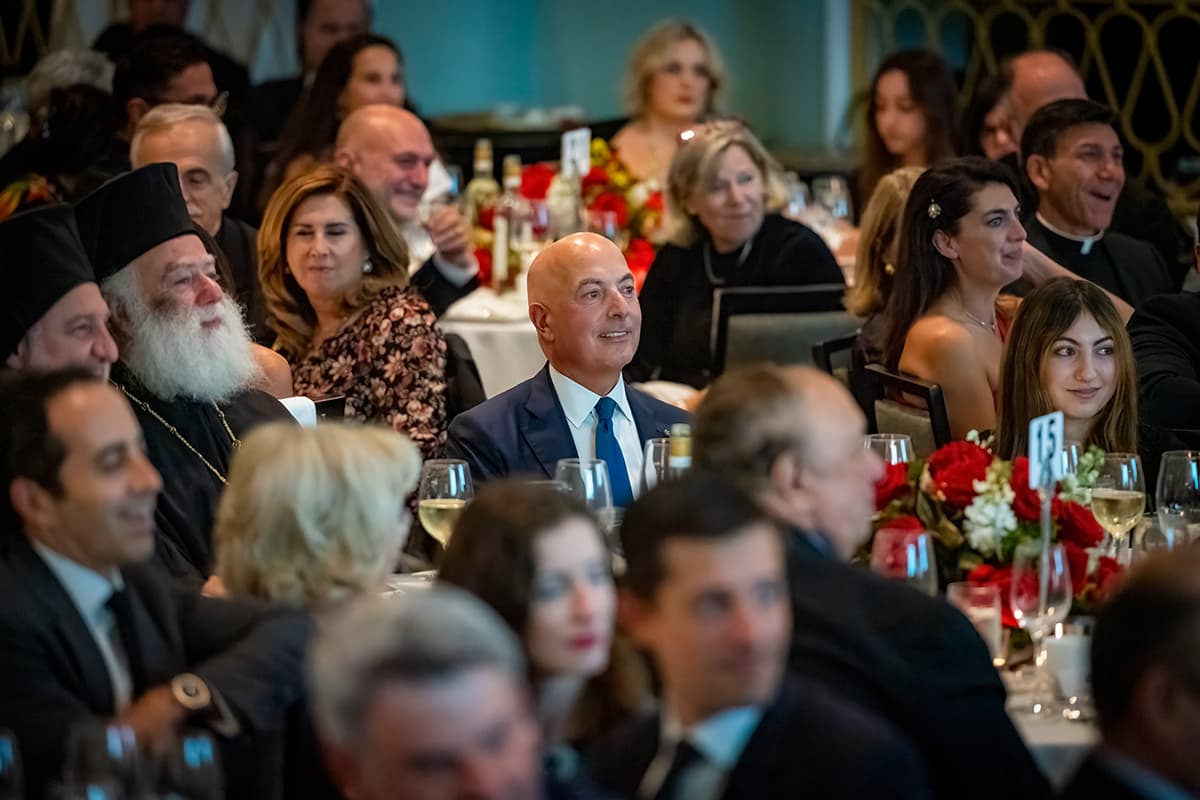 At the conferral of the award, His Eminence Archbishop Elpidophoros of America spoke to Archon Psaros, saying: “Archon Michael: I address you directly, not that you are in need of any exhortation from anyone; for your enthusiasm and devotion to the Order of Saint Andrew and to the Church are manifest in everything you do. Indeed, your dedication is in evidence on every level of Church life – foremost in your support of the Ecumenical Patriarchate. Your generosity over time, and in particular during the Apostolic Visit of His All-Holiness last year, was vital to the success of the trip. But there is so much more, that I hesitate to make a list, as I am afraid of leaving something out. I know that even when you fill in the gaps, and make possible various events in the life of the Church, it is not for the sake of display.”

Dr. Anthony J. Limberakis, National Commander of the Order, said, "The breadth and depth of Archon Psaros’ activities in service of the mission of the Order of Saint Andrew is truly remarkable; the National Council has most fittingly recognized his magnificent work by designating him to be the recipient of this prestigious Award, in recognition of the extraordinary service exemplified by the late Archon National Vice Commander Nicholas J. Bouras of blessed memory." 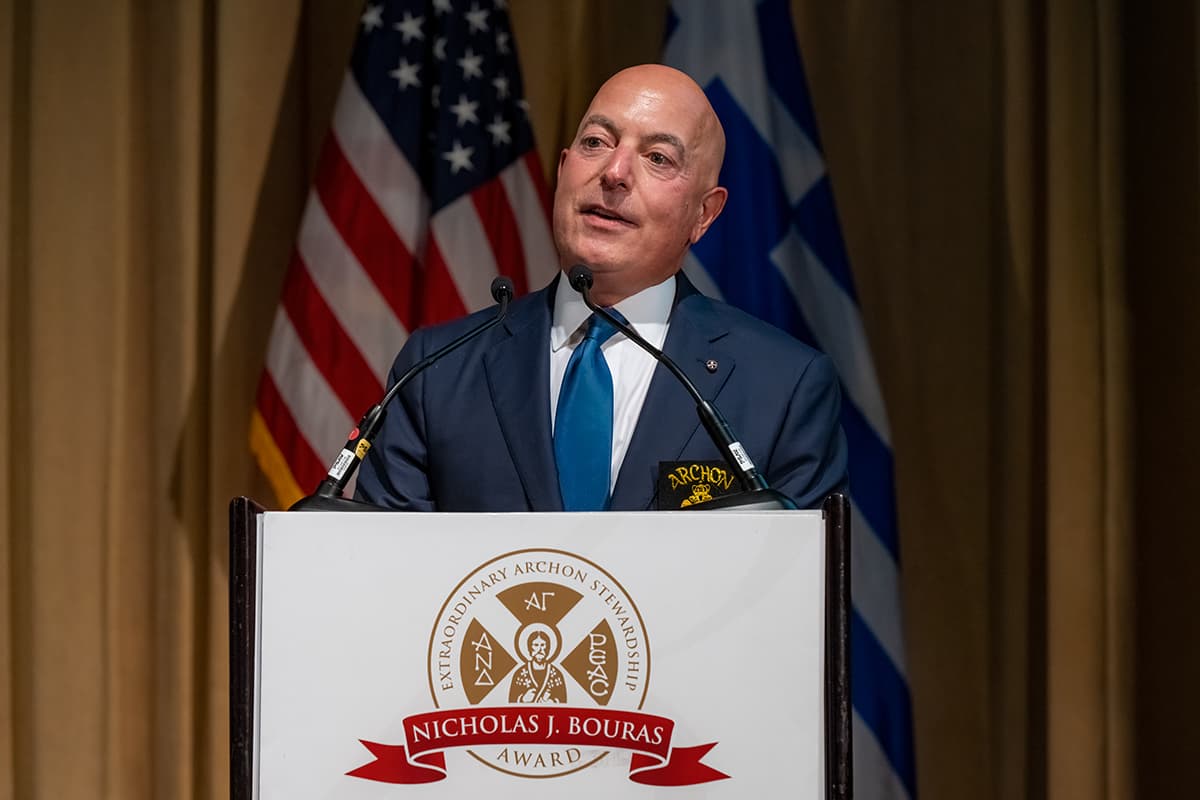 Archon Psaros has played a pivotal role in the completion of the Saint Nicholas Greek Orthodox Church and National Shrine, the only house of worship at Ground Zero in New York City (www.stnicholaswtc.org). Archon Psaros serves as Vice Chairman of the Friends of St. Nicholas, where he is contributing abundantly of his time and financial resources to the project. Archon Psaros stated, “The National Shrine is our American Parthenon, the most visible symbol of Hellenism in the United States. For our Orthodox Faithful, the National Shrine is our American Hagia Sophia of Constantinople – the daughter of our Mother Church.”

The Psaros Family, in the presence of His All-Holiness Ecumenical Patriarch Bartholomew on the occasion of his Apostolic Trip in October 2021, made a $3.1 million gift in October 2021 to Georgetown University, to establish the Ecumenical Patriarch Bartholomew Endowed Orthodox Chaplaincy, Endowed by the Michael Psaros Family. This was the first fully endowed chaplain’s position in Georgetown University’s Campus Ministry program. Archon Psaros and his wife, Robin, also made a $250,000 gift to the university in 2019 to the sacred space at Copley Crypt where Orthodox Christian vespers, liturgies and Catholic Masses are held. This gift funded Orthodox icons and iconostasis.

His All-Holiness Ecumenical Patriarch Bartholomew also visited and blessed “Evyenia’s House of Hope” in Weirton, West Virginia, and was then hosted by the Psaros Family at All Saints Greek Orthodox Church, also in Weirton. Archon Psaros explained: “I donated my grandmother’s house, that I bought after she fell asleep in the Lord, to the Weirton Christian Center.” Since 2015, “Evyenia’s House of Hope” has become a place for families to repair their lives. Under the umbrella of the Weirton Christian Center, the House is now a place for supervised visitations for children and the parents from whom they are separated. During the reception at All Saints Greek Orthodox Church, in the presence of His All-Holiness, the Psaros Family announced it was creating a $3 million endowment, in the name of Ecumenical Patriarch Bartholomew, to endow the salary of the parish priest.

Michael Psaros of All Saints Greek Orthodox Church in Weirton, WV, The Church of Our Savior in Rye, NY, and The Dormition of the Virgin Mary in Southampton, NY was invested as Archon in 2014 and conferred with the offikion Ostiarios. He currently serves on the Order’s National Council.

Archon Psaros previously served as the Treasurer of the Holy Greek Orthodox Archdiocese of America where he led a successful financial, administrative, and organizational restructuring, and currently serves on the Executive Committee of the Archdiocesan Council. He is also a founding member of FAITH: An Endowment for Orthodoxy and Hellenism; and serves on the Board of Trustees of The Leadership 100 Advancing Hellenism and Orthodoxy in America, the Executive Board of The Hellenic Initiative, and is a member of AHEPA. Archon Psaros also serves in the leadership of The Ecumenical Patriarch Bartholomew Foundation (www.bartholomew.foundation).

The National Council of the Order of Saint Andrew unanimously voted in 2010 to establish the Nicholas J. Bouras Award. The Award is presented annually to an individual who has demonstrated extraordinary and incomparable stewardship to the Order, empowering Archons to vigorously pursue securing religious freedom for the Mother Church of Constantinople.

The Award is named after the late National Vice Commander Nicholas J. Bouras, Archon Depoutatos, who demonstrated remarkable leadership as a faithful son of the Ecumenical Patriarchate and exemplary steward of the Greek Orthodox Archdiocese of America. Churchman, World War II hero, devoted husband of his beloved late wife Anna, Philanthropist, sincere Christian, Archon par excellence and Industrialist are terms that have all described the life of Nicholas J. Bouras. In tribute to Archon Bouras, National Commander Dr. Limberakis wore the maroon bow tie that was given to him by the late National Vice Commander during one of the Athenagoras Human Rights Award banquets, when the Commander inadvertently forgot his own bow tie.

View Photos of the Bouras Award