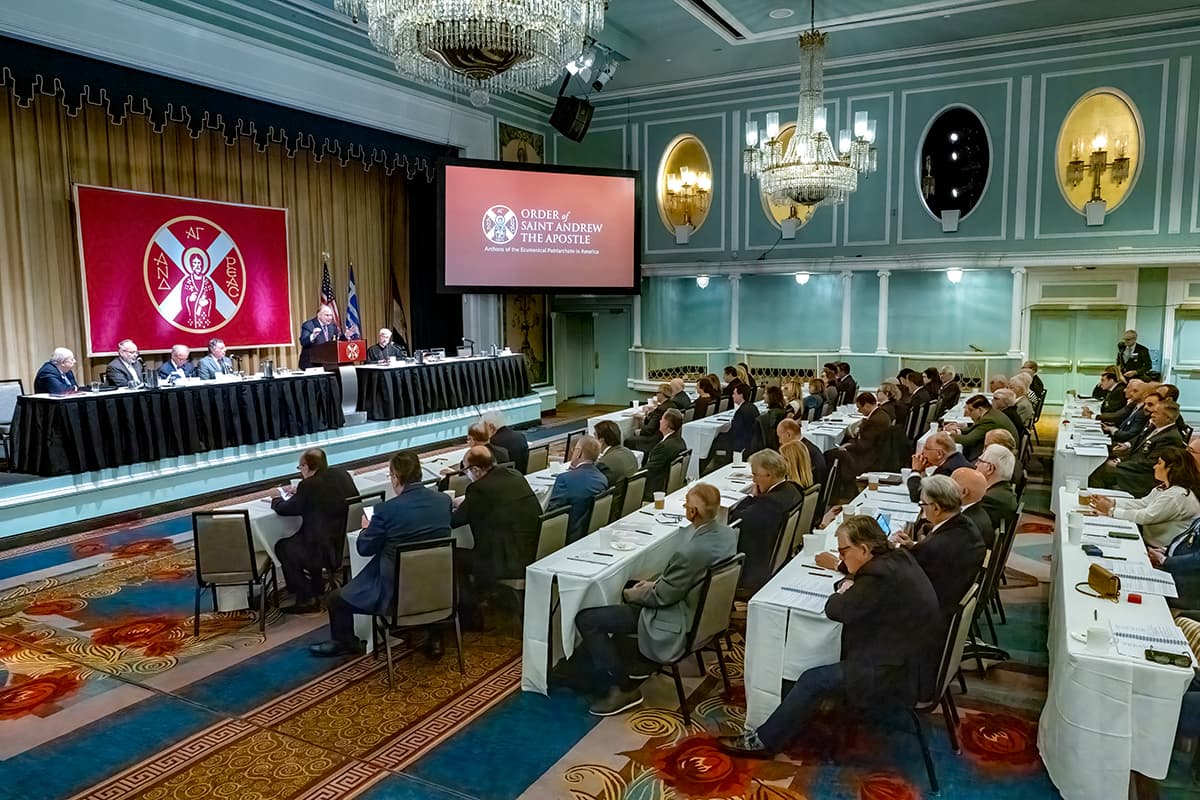 On Saturday, October 8, 2022, the Order of Saint Andrew the Apostle, Archons of the Ecumenical Patriarchate, held its Annual Meeting, a joint assembly of Archons and Archons-elect and their spouses, in the New York Hilton Midtown’s Trianon Ballroom, during the annual Archon Weekend.

After the invocation by His grace Bishop Joachim, Archon Dr. Anthony J. Limberakis, National Commander of the Order, welcomed the attendees and read the Patriarchal Exhortation from His All-Holiness Ecumenical Patriarch Bartholomew. National Vice Commander Archon Hon. B. Theodore Bozonelis, Jr., then read the Archepiscopal Exhortation from His Eminence Archbishop Elpidophoros of America, and Dr. Limberakis introduced the Order’s National Council and Regional Commanders. 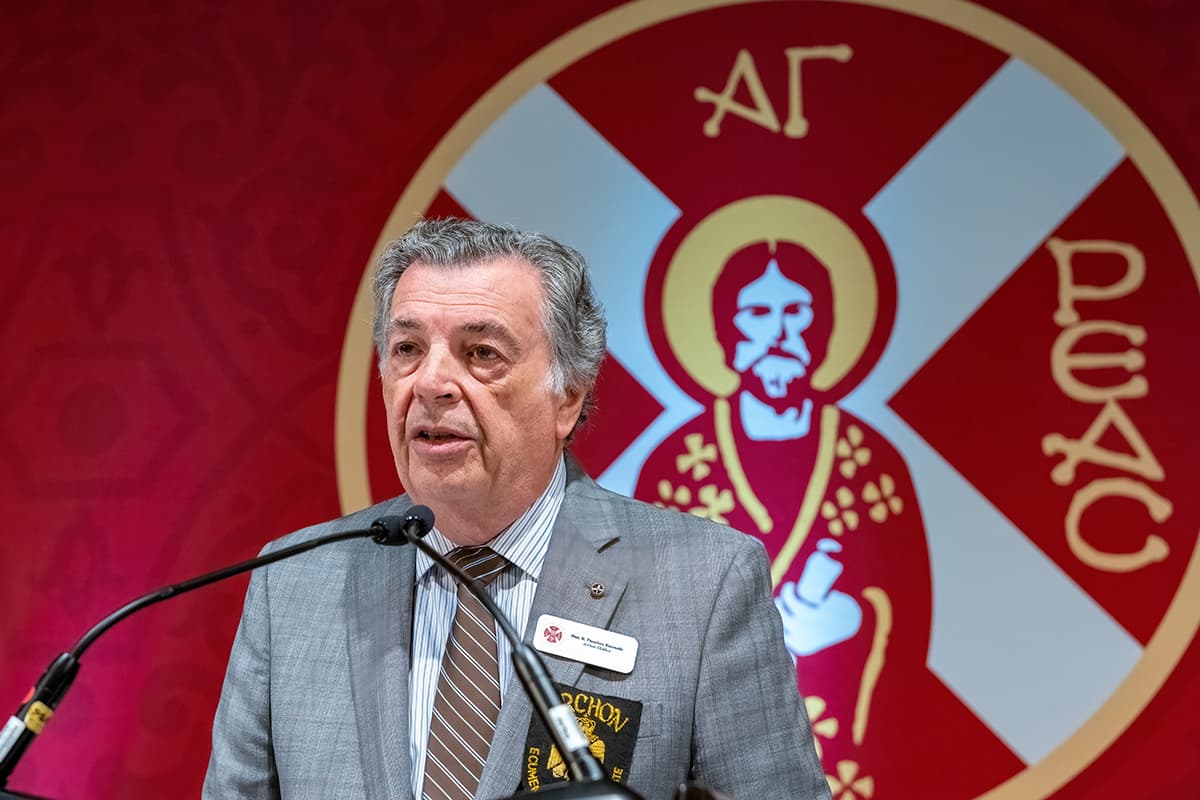 A key element of the meeting came with the approval of the Treasurer’s Report from Archon Peter J. Skeadas, National Treasurer. An update was also presented on the Order’s insurance coverage.

Then followed the presentation of the Archon Class of 2022 by Archon Constantine G. Caras, Esq. As the name of each new Archon was announced, he stepped forward for an Archon Class of 2022 group picture with the National Commander. Following that, Archon John Zavitsanos, Esq. offered an update on the Exarch’s Appeal. 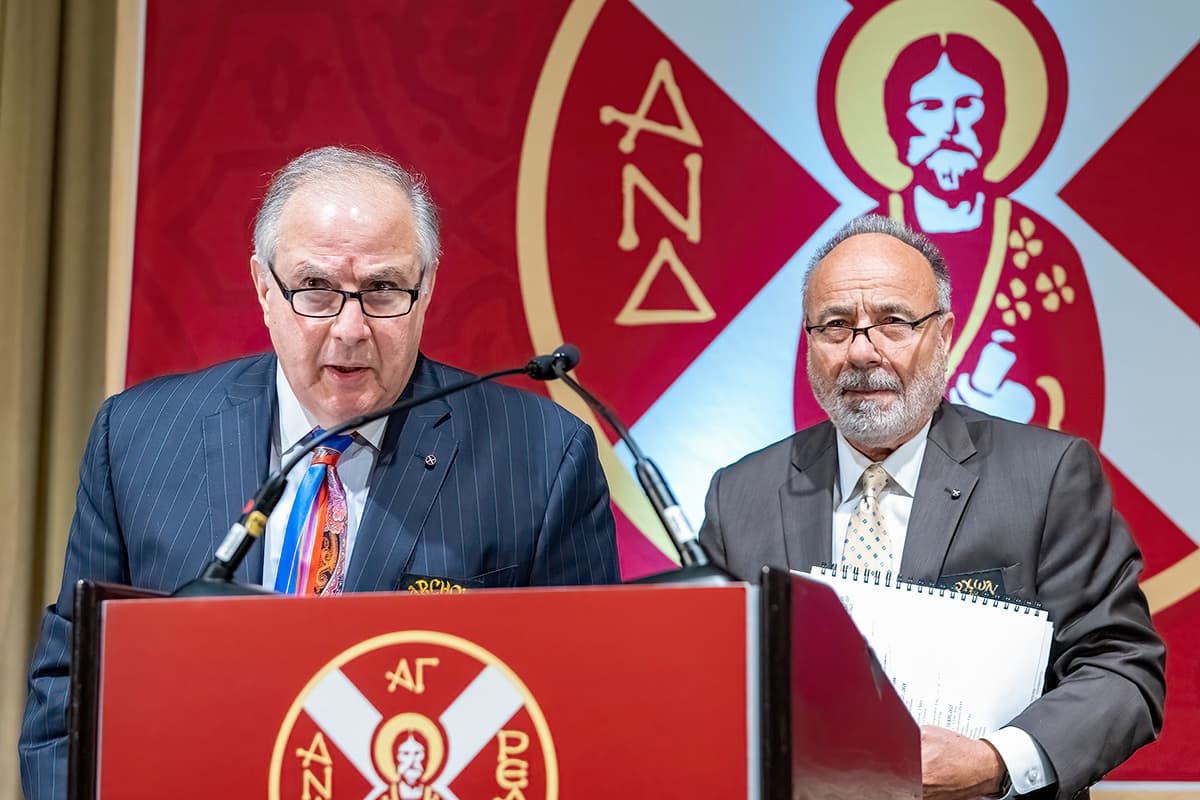 Regarding the 2022 Athenagoras Human Rights Award presentation to His Beatitude Patriarch Theodore II of Alexandria and All Africa, Archon Michael G. Psaros, Co-Chair explained that a portion of this year’s sponsorship and ticket funds net of expenses would be restricted for the sole use of the Ecumenical Patriarch Bartholomew Foundation.

The Order expressed its heartfelt gratitude to those who have underwritten the Annual Athenagoras Human Rights Award Banquet with donations of $100,000: the Anna K. and Nicholas J. Bouras Foundation (each year since 1998!); and Archon Michael G. Psaros (each year since 2016!). Congratulations were offered to Archon Psaros for receiving the 2022 Nicholas J. Bouras Award for Extraordinary Archon Stewardship.

Dr. Limberakis then provided a report on the Ecumenical Patriarch Bartholomew Foundation for the Sacred See of St. Andrew, explaining that it was established by the Order of St. Andrew to ensure the economic security of the Ecumenical Patriarchate in perpetuity and named in honor of the longest-serving Ecumenical Patriarch in history; and that it is an independent, separate entity with its own Board of Trustees established as a non-profit corporation under the laws of the State of New York, with 501(c)3 status from the International Revenue Service. The attendees were informed that the Fund received over $1 million at the 2018 Athenagoras Human Rights Award Presentation to Fr. Alexander Karloutsos and Presbytera Xanthi Karloutsos. There are currently 187 FOUNDERS, faithful who have pledged $100,000. Another category of Builders have donated at all levels below $100,000. The current pledged amount is $20.990 million. 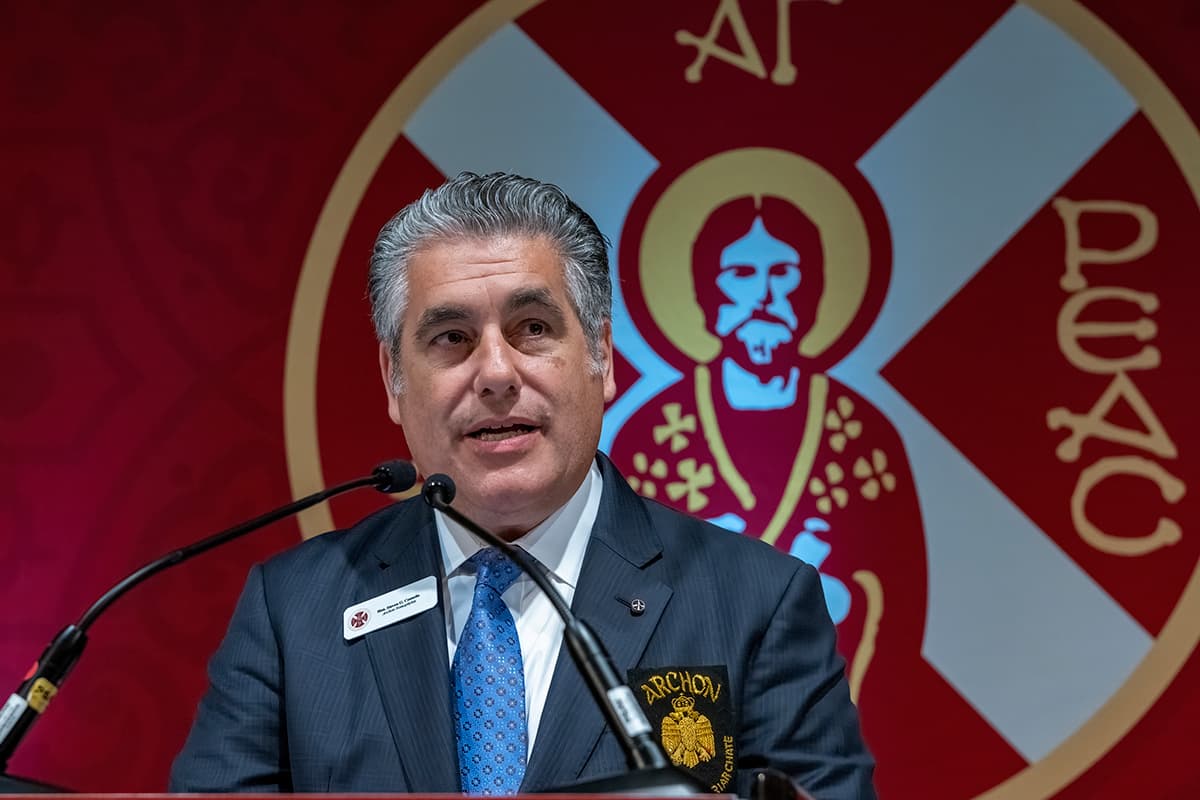 The meeting then turned to National Council Committee Reports from Chairs, including the Nominating Committee and the Bylaws Committee. Proposed changes to the bylaws were discussed and voted upon. Archon Andrew E. Manatos discussed the Washington Initiative, and Archon Hon. Steven G. Counelis discussed his participation with Archon Rocky Sisson in the annual human rights meetings of the Organization for Security and Co-operation in Europe (OSCE) in Warsaw, Poland in September 2022. 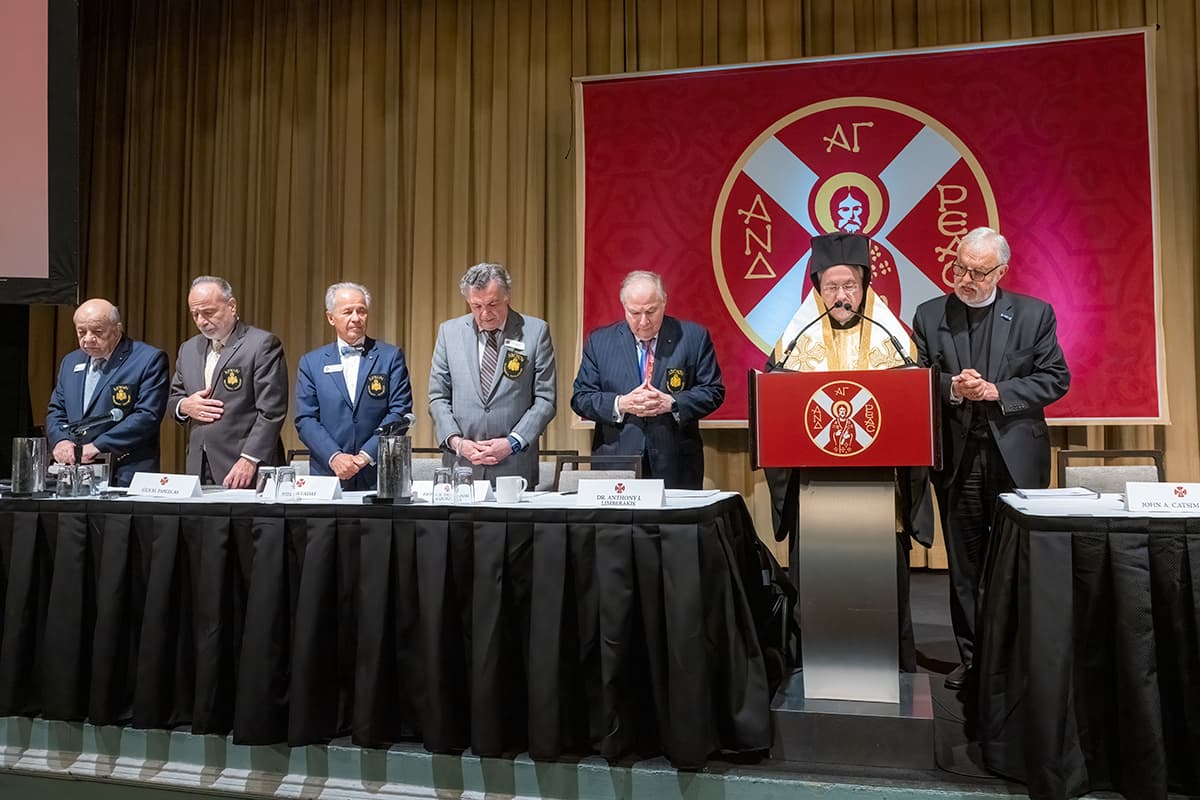 His Grace Bishop Joachim offered a Trisagion for the repose of the souls of the Archons who departed from this life during the past year, and gave his benediction; then the meeting adjourned. 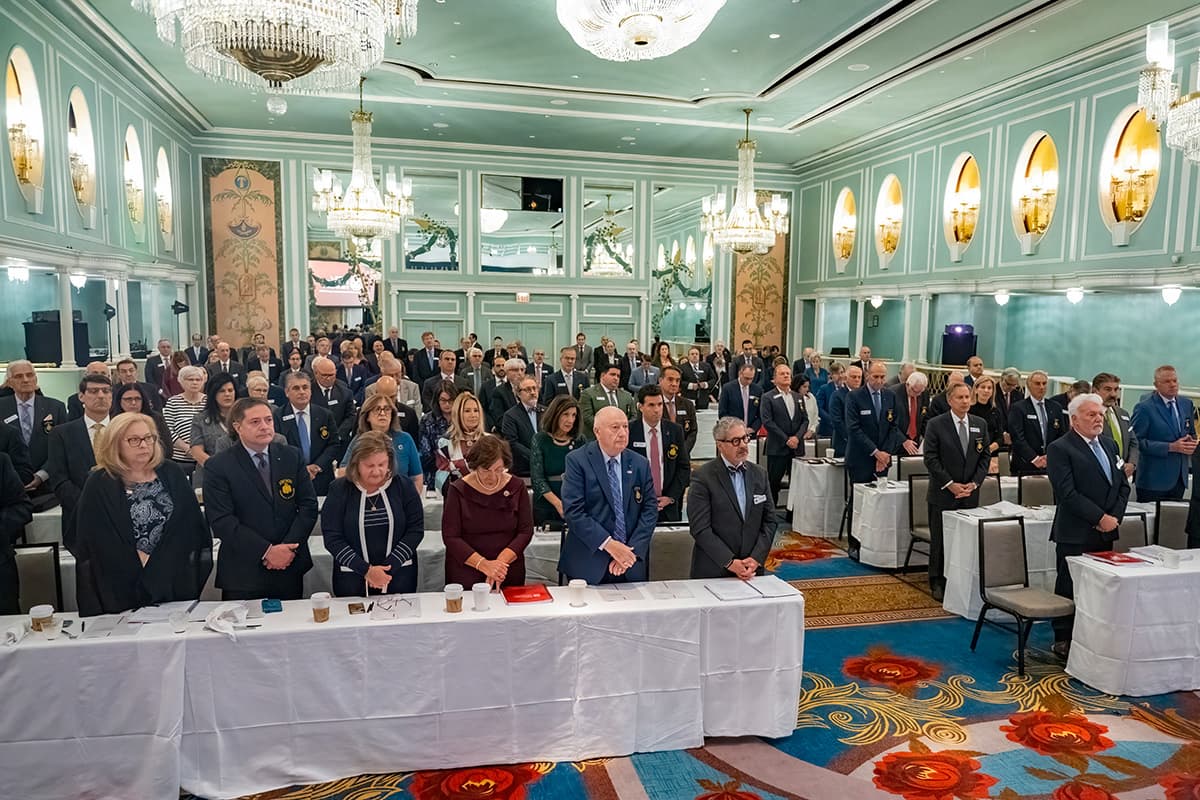 Archons and spouses participate in a trisagion for those who departed this past year.
View Photos of the Annual Meeting