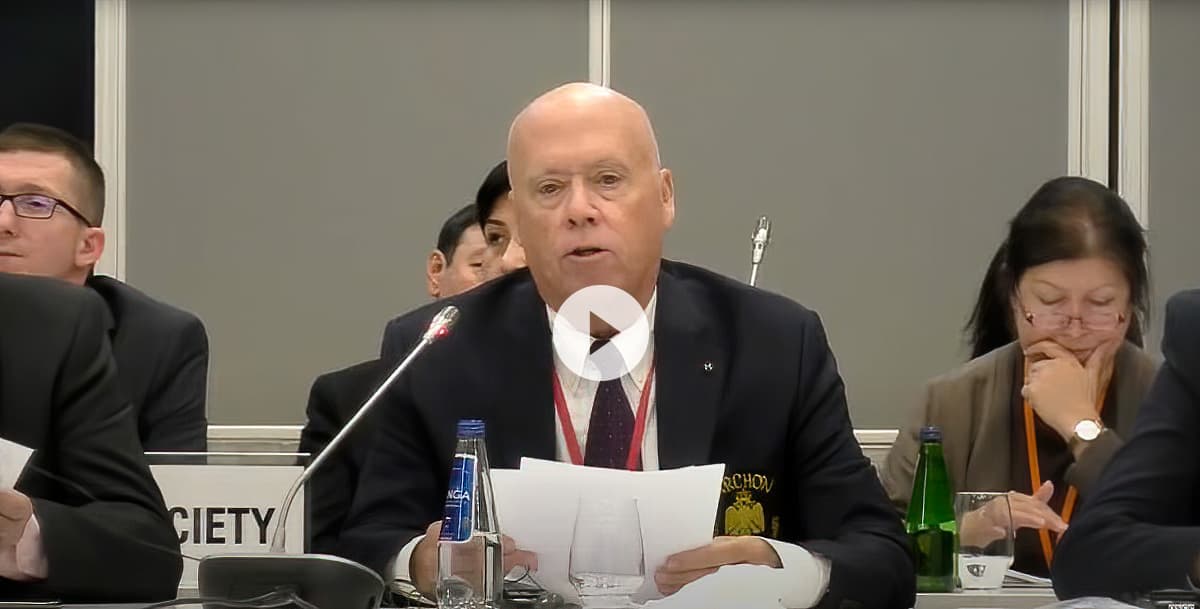 The Order of Saint Andrew the Apostle is once again making presentations at the annual Human Dimension meetings of the Organization for Security and Co-operation in Europe (OSCE), as it has done since 2006. Each year, the Order sends a delegation to the OSCE; this year, the delegation was represented by Archon Franklin (Rocky) Sisson, Jr., Archon Prepositos, and Archon Hon. Steven G. Counelis, Archon Nomophylax.

On September 28, 2022, on behalf of the Order of St. Andrew, Archon Sisson made an oral presentation on the status of the Ecumenical Patriarchate to the 2022 Human Dimension Implementation Meeting of the Organization for Security and Co-operation in Europe (OSCE) in Warsaw, Poland. Archon Hon. Counelis is scheduled to make his presentation tomorrow.

Archon Sisson made his presentation during the second Plenary Session of the Meeting, which dealt with Fundamental Freedoms. “The Order of Saint Andrew the Apostle,” Archon Sisson stated, “once again reports that the Orthodox Ecumenical Patriarchate in Turkey is denied basic religious freedom.”

The Ecumenical Patriarchate, Archon Sisson noted, “for many years has faced a hostile environment which at times has threatened its very existence. This is why in 2022, Turkey continues to be on the ‘special watch list’ of the United States Commission on International Religious Freedom as it has been since 2013. According to the 2022 Report, ‘the state of religious freedom in Turkey remained deeply troubling, with the perpetuation of restrictive and intrusive governmental policies on religious practice and a marked increase in incidents of vandalism and societal violence against religious minorities.’”

On behalf of the Order, Archon Sisson called for an end to these practices. He also stated that “our commitment to religious freedom necessitates that we also speak against those Orthodox Christians who, with state support, undermine the religious rights of others. This is precisely what is happening in Ukraine and Africa where leaders of the Moscow Patriarchate are actively undermining the religious self-determination of millions of Christians who do not wish to be subjected to a church that has been subordinated to the Russian government.”

With 57 participating States in North America, Europe and Asia, the OSCE is the world’s largest regional security organization. The OSCE works for stability, peace and democracy for the entire world, through political dialogue about shared values, as well as through practical work intended to make a lasting difference.