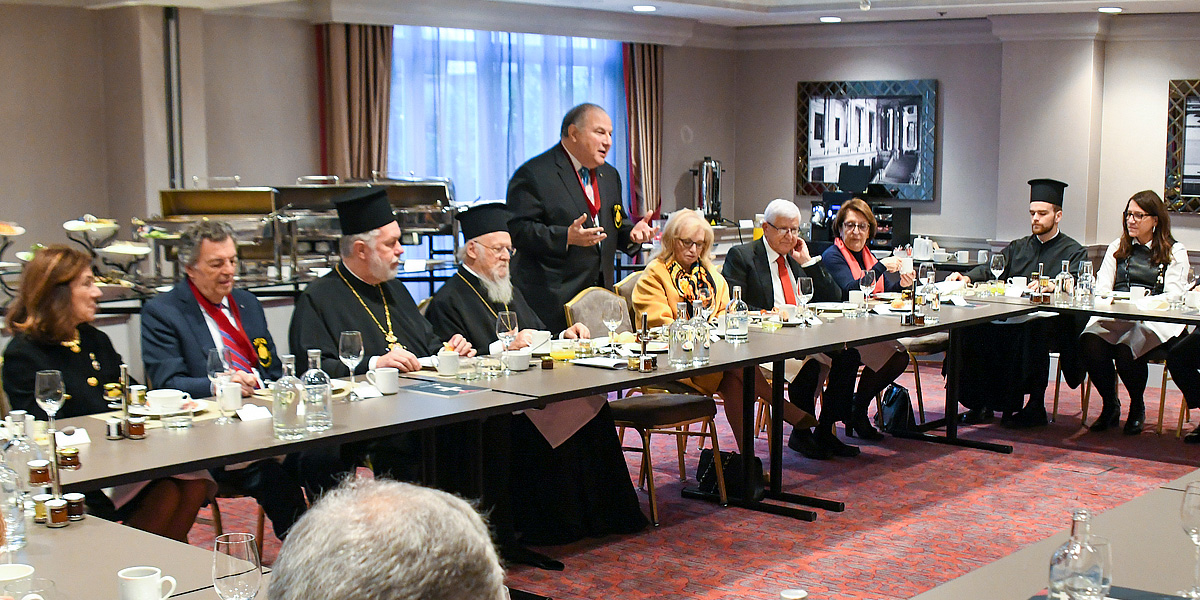 National Commander Dr. Anthony J. Limberakis addresses His All-Holiness Ecumenical Patriarch Bartholomew, His Eminence Metropolitan Athenagoras of Belgium, and members of the Archdiocesan delegation on the final day of celebrations marking the 50th anniversary of the Orthodox Archdiocese of Belgium.
© Photo by J. Nelson

With the blessings of His Eminence Archbishop Elpidophoros of America, an Archdiocesan delegation accompanied His All-Holiness Ecumenical Patriarch Bartholomew to Brussels, Belgium from November 9 to 11, 2019 on the occasion of the 50th Anniversary/Golden Jubilee of the Orthodox Archdiocese of Belgium. His Eminence Metropolitan Athenagoras of Belgium hosted the delegation, which was led by Father Alexander Karloutsos, Vicar General of the Archdiocese of America and Spiritual Advisor of the Order of Saint Andrew the Apostle, and Presbytera Xanthi Karloutsos.

The delegates were greeted in Brussels on Saturday, November 9 by Archon Boris Gurov of the Holy Metropolis of Belgium and his wife, Youlianna Gurov, who assisted the delegation and also served as its host in Belgium, accompanying the delegation to all events and participating in them.

Upon their arrival in Belgium, the delegation traveled to Kasterlee, Belgium, where they attended a luncheon in honor of His All-Holiness hosted by Archon Theo Roussis of the Metropolis of Belgium. Each delegate had an opportunity to introduce himself or herself to His All-Holiness, and to express their respect and love to him.

Later in Brussels, the delegation attended Vespers, led by His All-Holiness at the Orthodox Cathedral of the Holy Archangels in the presence of Belgian authorities, diplomats, representatives of other denominations, and the Orthodox faithful.

Thereafter, Archon Boris and Youlianna hosted a dinner in honor with discussions centered on religious freedom, the European Union, and other important issues.

On Sunday November 10, the delegation attended Matins and Divine Liturgy presided by His All-Holiness at the Orthodox Cathedral of the Holy Archangels, with multiple Orthodox bishops and clergy. An official banquet in honor of His All-Holiness, was hosted by the Metropolis of Belgium, with over 1000 in attendance. In his remarks, His Eminence recognized the participation of and expressed gratitude to the Archdiocesan delegation of America and the Archons of the Order of Saint Andrew the Apostle.

The delegation concluded the events with a luncheon hosted by Belgians Alexander and Catherine Kartalis at their home in Brussels as discussions summarized the importance of all events attended and the special and productive time spent with His All-Holiness.