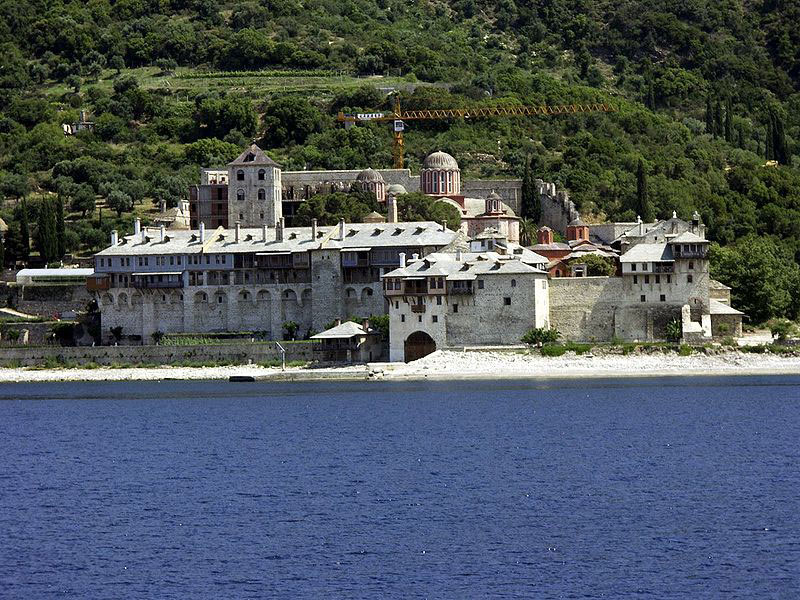 In keeping with its status as a beacon of Orthodox Christianity and international symbol of hope, perseverance, and resilience, the Saint Nicholas Greek Orthodox Church and National Shrine at the World Trade Center will feature holy icons from the master iconographers of the Holy Mountain. Be sure not to miss the feature on these singular examples of Byzantine sacred artwork on the renowned news feature program "60 Minutes," this Sunday, September 6 at 7pm EDT on CBS.

This article first appeared on The Greek Reporter

This Sunday, September 6, the CBS television program “60 Minutes” will feature a segment on the new artwork created by Mt. Athos monks which is to adorn the interior of the rebuilt St. Nicholas Shrine, the only church to be demolished in the September 11, 2001 terrorist attacks.

After an extraordinarily difficult period in which it sometimes seemed that the church would not be rebuilt due to cost overruns and claims of malfeasance, the Shrine is finally due to open its doors on September 11, 2021.

Archbishop of America Elpidophoros, the newly-elected head of the Greek Orthodox Church in the Americas, made it a priority of his administration to root out the problems which had nagged the rebuilding efforts and he, along with New York City Mayor Andrew Cuomo, officiated at the start of its reconstruction in August.

“The start of construction on the new St. Nicholas Church echoes the overarching message of these challenging times: We are going to build back the way we built back from 9/11, and it will be better and stronger with more solidarity and more faith and more spirit of community than ever before,” Governor Cuomo stated triumphantly.

“This St. Nicholas is going to be more splendid and more inviting than the St. Nicholas that was here before. We have gone through difficult times together, but we rise from the ashes and we rise stronger than ever before. That’s what this St. Nicholas will stand for. It is a powerful message to all New Yorkers and all Americans,” the governor added.

In extremely pointed remarks, Elpidophoros also reminded those present of the recent reconversion of the great cathedral of Hagia Sophia in Istanbul into a mosque. “The greatest church ever in the history of the world,” he said, “was taken from us… in an act of domination and chauvinism.”

Seemingly tying that recent takeover to the events of twenty years ago, in the terrorist attacks of September 11, 2001, Archbishop Elpidophoros said of the destruction of that day, which resulted in the compete obliteration of the previous Shrine, “We shall not let this stand!” adding “We are going to open this Shrine as a sign of love, not hate.”

He declared that the new, rebuilt Shrine will represent “an ideal that exists in this America, a nation where no one is excluded but all are embraced.”

The master iconographer of Mt. Athos, Father Lukas, from the Xenophontos Monastery, is in charge of the daunting task of painting, or “writing,” the new iconography for St. Nicholas.

Using the ancient method of egg tempera, he told Scott Pelley from 60 Minutes in a report aired on April 12, 2020, that “God has called me to do this work. to communicate the spirit of Mount Athos to the people.”

In the summer of 2019, Father Lukas left his monastery on Mt. Athos to look at the partially-rebuilt St. Nicholas Shrine for himself, to get a feel for the kind of icons and other artwork which will be needed to decorate and give life to this most special of all Manhattan churches, the one which will, upon its completion, mark the triumph over the death and destruction of that day, nearly 20 years ago.

Father Lukas told Pelley “I personally want this church, through the iconography to open up a new horizon for people, that they come away with hope. If this happens, the icons will have fulfilled their purpose.”

Despite a price tag that might exceed 81 million dollars and a turbulent background that involved accusations of financial mismanagement, “now the construction of Saint Nicholas Shrine is on the right track and the church – once finished – will be the most visited Christian structure in New York City,” said Michael Psaros, the Vice-Chairman of ‘Friends of Saint Nicholas’ the new organization overseeing the realization of the project, in a recent interview with Greek Reporter.