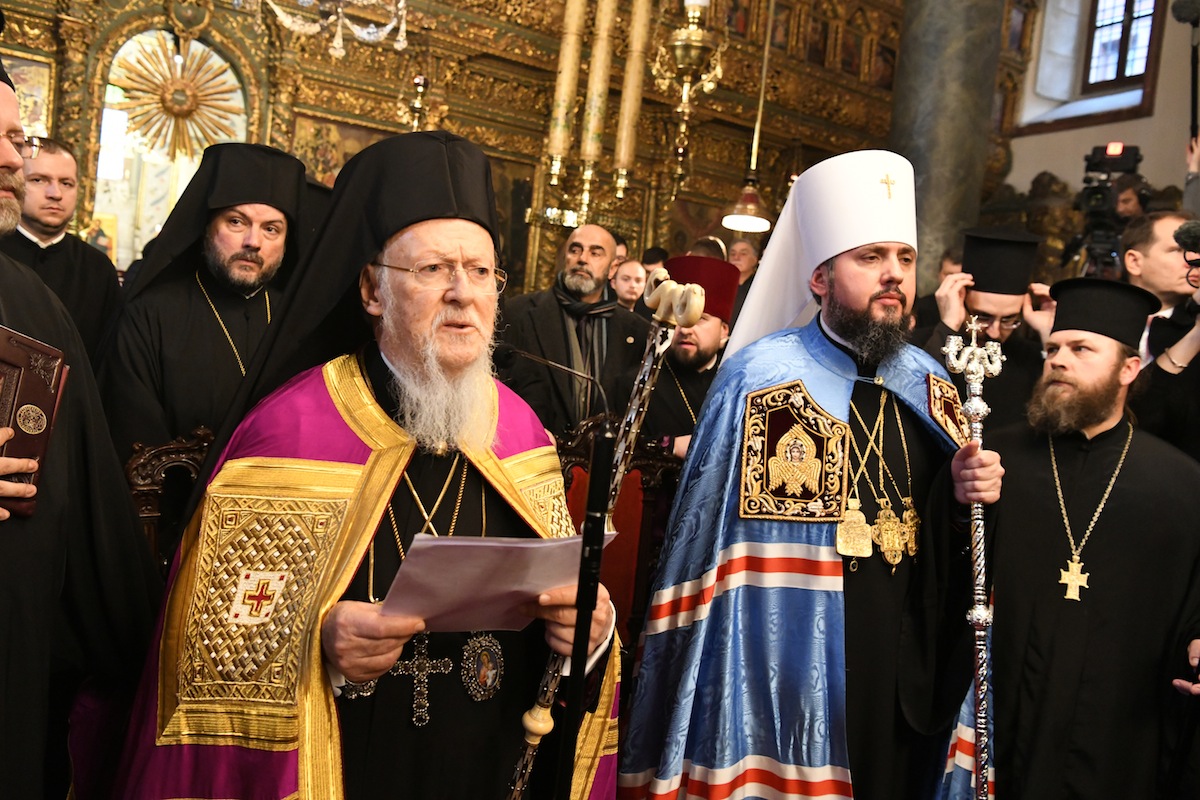 His All-Holiness addresses Metropolitan Epiphanios on the historic occasion of granting the Ukrainian Orthodox Church its autocephaly.
© N. Manginas

On January 5, 2019 at the Patriarchal Church in the Phanar, His All-Holiness Ecumenical Patriarch Bartholomew, in the presence of Epiphanios, the Metropolitan of Kiev and of all Ukraine, the President of Ukraine Petro Poroshenko and his family, hierarchs and clergy, a multitude of Ukrainian state and government officials, and officials and media representatives from all over the world, signed the document of the Tome of the official recognition and proclamation of the Autocephaly of the Ukrainian Orthodox Church.

Here is the address His All-Holiness gave on this momentous and world-historical occasion.

Your Beatitude Metropolitan Epifanios of Kyiv and all Ukraine,

Light and delight, peace and unity have appeared today on the most holy Church of Ukraine, as it receives in the hands of Your dearly beloved Beatitude the Tomos of its official recognition and declaration to an Autocephalous Church, ranking it in the choir of the fourteen sister Churches that comprise “the whole institution” of our holy Orthodox Church.

The pious Ukrainian people have awaited this blessed day for seven entire centuries. And, behold, the fullness of time has come for them, too, just as so many Orthodox peoples beforehand, to enjoy the sacred gift of emancipation, independence and self-governance, becoming free from every external reliance and intervention, which have not always been nurturing and respectful of their own identity.

Your Beatitude, it was Your right to request and demand Your autocephaly. It was the right and privilege of Your Mother Church of Constantinople to bestow upon You this status of autocephaly. We wholeheartedly pray that you will prove worthy of this gift and emerge as a precious fellow-traveler of the other sister Churches in Pan-Orthodox unity and cooperation, as well as in our common witness to the contemporary world, which thirsts for the inexhaustible spiritual treasures of Orthodoxy.

Today, by the Lord’s grace, we are realizing the restoration to communion of millions of faithful in Your land, who abruptly found themselves outside of canonicity and communion, through no fault of their own. However, Constantinople gathered and embraced them as their genuine mother—the same Church that once led them to Christian baptism—rather than as their stepmother. After all, never and for no people or nation had Constantinople acted as a stepmother throughout its long and frequently troubled historical journey. This Church of Christ’s poor always emptied itself, gladly sacrificing portions of its jurisdiction, diminishing itself in order to serve the wishes and interests of its children.

On this magnificent and historical day, at the Sacred Center of Orthodoxy, standing and celebrating with us are Prince Vladimir and Saint Olga, along with all the saintly descendants of the illustrious Ukrainian land, as well as all the advocates and supporters of Your self-evident rights, of the Ukrainian people, and of justice in general, but also of human rights and particularly religious freedom for all people and nations. All of these are present in spirit and prayer, sharing our joy and pleasure.

We greet the honorable presence among us at this sacred moment of the head of the State of Ukraine, His Excellency the President Mr. Petro Poroshenko, who so greatly desired to see this great and glorious day, expressing his innermost yearning, prayer and petition of his people to enjoy their freedom and independence.

We express the gratitude, commendation and blessing of the Mother Church to all of You. This Church of the City of Constantine will always be at Your side—hoping, praying and working for Your growth and progress in Christ, as well as for the stability of the newly-planted Orthodox Autocephalous Church of Ukraine.

Christ is in our midst!