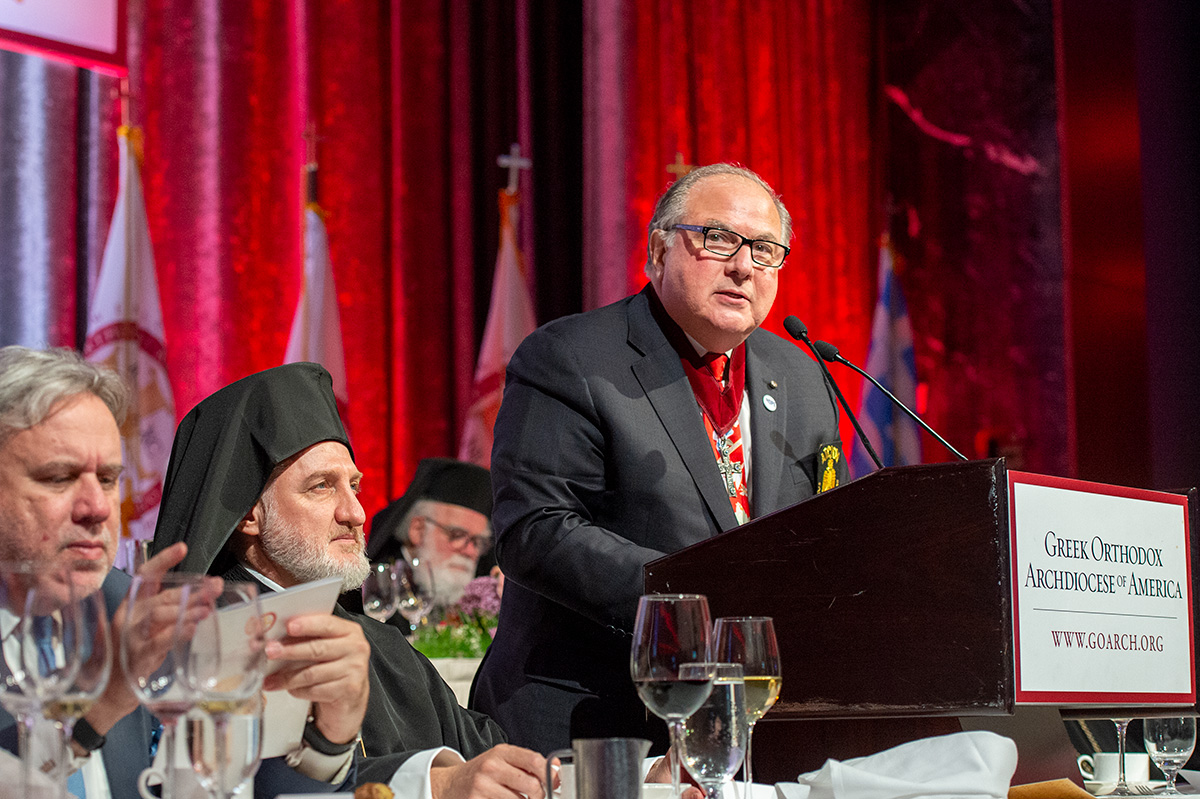 It was an immense honor for the Order of Saint Andrew the Apostle, Archons of the Ecumenical Patriarchate, to participate in the exciting and inspiring weekend of the Enthronement of His Eminence Archbishop Elpidophoros of America. Over 1,700 people attended the luncheon and over 1,300 the Enthronement. The Archons' National Commander, Dr. Anthony J. Limberakis, was among the speakers, along with five additional Archons representing organizations that they lead. The Order is extremely honored to have been among those welcoming His Eminence to the United States, and looks forward to working with him in service of the Orthodox Church in America and the Ecumenical Patriarchate. Below is the text of Dr. Limberakis' remarks.

Order of St. Andrew, Archons of the Ecumenical Patriarchate in America

Your Eminence Archbishop Elpidophoros of America

Your Eminences and Graces, Clergy and Guests

Members of the Diplomatic Corps

Brother Archons of the Ecumenical Patriarchate

My beloved friends, how fitting it is that on this Saturday of Pentecost Week our beloved Archbishop Elpidophoros is enthroned as our spiritual father in America, enlightened with the Holy Spirit and conveying a message of hope, of servant-leadership, of honesty and transparency.

Your Eminence Archbishop Elpidophoros, in your person we see with our own eyes and hear with our own ears the timeless faith and the limitless love of our Holy Mother Church and His All-Holiness Ecumenical Patriarch Bartholomew, whom you served with distinction for the past 25 years, first as deacon, then as priest/monk, then as Metropolitan and Abbot and now, as Exarch of the most important Eparchy of the Ecumenical Patriarchate, the Greek Orthodox Archdiocese of America. We see in your countenance striking blue eyes, reminiscent of your predecessors who laid the administrative and philanthropic foundations of this great Eparchy and we see in your genuine and loving smile a sense of reassurance and confidence that everything that currently confronts us as challenges will be addressed and transformed into great achievement for the good of our Holy Archdiocese of America and Holy Mother Church of Constantinople.

We, the Archons of the Great Church of Christ, express our profound gratitude to His All-Holiness and the Holy and Sacred Synod for your unanimous election to the Archiepiscopal Throne of America.  We expect great things from you, Your Eminence, because we know that you have been trained in greatness, by a great Ecumenical Patriarch, who has set the highest standard for servant-leadership, for all to emulate.

You have already accomplished so much: at Halki you oversaw the renovation and digitization of its legendary library and as Metropolitan of Bursa you redeemed ancient churches giving hope to the local Greek Orthodox minority in Asia Minor.  Your clarion voice in the magnificent book you authored in advocacy of Ukrainian Autocephaly supporting the brilliant and just decision of His All-Holiness was a tour de force. Your Eminence, you are a man of action and a Hierarch of integrity and we are so grateful to God for your leadership.

As Archons of the Great Church, we have had numerous opportunities to work with you, to personally experience your servant-leadership, to know you, first-hand as a minister of the Gospel, and a servant of all God’s children.  We saw you in action at our 2009 Annual Archon Lenten Retreat held at Holy Cross as Retreat Master and in Berlin at our Second International Archon Religious Freedom Conference as a featured speaker and over the years at the Phanar witnessing your extraordinary service to the Mother Church, always speaking the Truth in Love.

We enthusiastically embrace you with open arms and loving hearts as our new Archbishop, and as a true son the Ecumenical Patriarchate who will strengthen our bond with the Holy Mother Church of Constantinople.  Your Eminence, we all have great expectations of your sacred ministry in America and we are confident that you will bring about a true renaissance of our Archdiocese: rebuilding hope, as we rebuild Saint Nicholas; restoring confidence as we restore stability at Hellenic College and Holy Cross, and inspiring optimism in the Orthodox Faithful in America as challenges are transformed into accomplishments.

We believe that the church bells that rang this morning across America celebrating your arrival, Enthronement and imminent ministry, will foreshadow similar bells pealing at the Patriarchal Cathedral of St. George at the Phanar for religious freedom and fundamental human rights for all.

Your Eminence, the Archons of America are humbled to serve you as holders of ancient Offikia who have historically served the needs of the Holy Mother Church for nearly two millennia.  We acknowledge your leadership among us, as co-workers in the Vineyard of our Lord and henceforth, and we will, in your words Your Eminence, all be deacons working together!

And now, with heartfelt thankfulness for the dedicated two decades of service of Archbishop Demetrios, and, as the Archiepiscopal staff has been handed to our new and beloved Archbishop Elpidophoros, we proclaim His Eminence Elpidophoros…

May God Grant you many, many years!  Eis Polla Eti Despota!