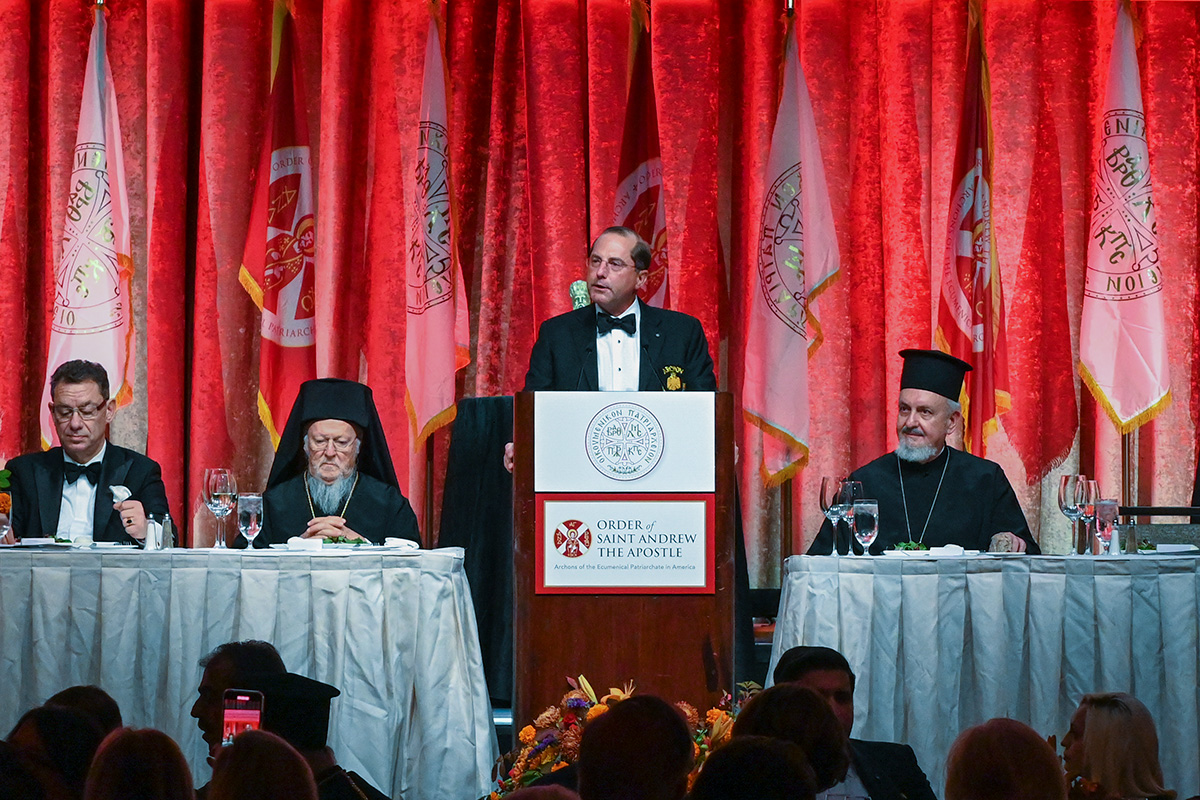 A strong defender of religious freedom during his tenure as Secretary of Health and Human Services, Secretary Azar, an Orthodox Christian, spoke at the enthronement of His Eminence Archbishop Elpidophoros of America at the Archdiocesan Cathedral of the Holy Trinity on June 22, 2019.

His Eminence Archbishop Elpidophoros said: “As our brother in the Orthodox Faith, former Secretary of Health and Human Services Alex Azar was the ideal Master of Ceremonies for the Athenagoras Human Rights Award Banquet. Secretary Azar is committed simultaneously to the eternal truths of the Gospel and the highest ideals of the American dream. I admire his commitment to both – to Jerusalem and to Athens, for they are the foundation of our civilization.”

Dr. Anthony J. Limberakis, National Commander of the Order of Saint Andrew the Apostle, Archons of the Ecumenical Patriarchate, stated: “How fitting it was for the Hon. Alex Azar II, the 24th United States Secretary of Health and Human Services and first Chair of the White House Coronavirus Task Force, to serve as our Master of Ceremonies for the Athenagoras Human Rights Award. If I may be so bold as to speak on behalf of the citizens of the world, it is without question that without Alex Azar, the architect of Operation Warp Speed, (Manhattan Project 2), we would not have the life-saving scientific achievements of those we honored on that memorable evening. We are most grateful, Mr. Secretary!”

The day after the Athenagoras Human Rights Award ceremony, His All-Holiness Ecumenical Patriarch Bartholomew invested Secretary Azar as a member of the Order of Saint Andrew the Apostle, Archons of the Ecumenical Patriarchate, with the offikion Aktouarios.

The Athenagoras Human Rights Award was established in 1986 by the National Council of the Order of Saint Andrew the Apostle. The Award was named after one of the great Church leaders of the 20th Century, the late Ecumenical Patriarch of Constantinople, Athenagoras I. The Award is presented every year at the Annual Banquet of the Order to a person or organization that has consistently exemplified by action, purpose and dedication, concern for the basic rights and religious freedom of all people.

Thank you Judge Bozonelis for that kind introduction. Your All-Holiness, we thank you for your presence and offer our warmest congratulations on this the thirtieth anniversary of your Enthronement as Ecumenical Patriarch. Eis Polla Eti, Despota. Your Eminence Archbishop Elpidophoros, I had the very great honor to represent President Trump at your enthronement and have been privileged to count you as a friend and spiritual father as our country has gone through this pandemic. Assembled hierarchs and clergy, it is a pleasure to be with you.

I fancy myself somewhat a representative of Pan-Orthodoxy. A Lebanese-American, I was born Antiochian and have helped build two Antiochian Churches. I am delighted to have my other spiritual father, Metropolitan Joseph, on the dais here tonight. And as a Ukranian- American, I now serve on the altar for Metropolitan Tikhon at the Orthodox Church of America Cathedral in Washington. But tomorrow I complete my tour of Orthodoxy, becoming an honorary Greek as an Archon. I am delighted to join all of you in this fellowship to support the Great Church of Constantinople, New Rome. Now I have to learn an entire new set of altar practices.

The Church has played a very important role in my life, perhaps never more so than in the past four years. I want to let you know that when you pray in the Liturgy for the President of the United States and all those in civil authority, those of us who are in those roles, and who are believers, feel your prayers and draw comfort and support from them. Thank you for that.

My good friend Secretary Mike Pompeo referred last night to the icons in his office as Secretary of State. I too had my collection of icons in my office as Secretary. For me that included the Theotokos and our Savior, of course, as well as my name saint, Alexander of Alexandria. I had another icon that Father Alexander Karloutsos gave me upon assuming office. It hung on the wall next to my desk, where I could always see it. It was the icon of Saint Sisoes looking down on the bones of Alexander the Great to remind us that all earthly power is fleeting, a useful reminder of the humility with which one should approach high office.

What a unique evening this is. Think how, by the grace of God, the efforts of the organizations represented on this dais, and the work of many others, have enabled us to be here tonight, in New York City, in person, and indeed likely have saved the lives of many of us in this room.

When we created Operation Warp Speed, most of the world’s leading experts said it couldn’t be done. You simply could not develop, secure authorization of, and manufacture therapeutics and vaccines for a novel pandemic in mere months. But thanks to Operation Warp Speed, the largest and most successful biomedical public-private partnership in world history, we did just that, together.

Our plan was based on experiences in the Bush Administration, building a government- based chemical, biologic, radiological, and nuclear countermeasures program through Project Bioshield and the Biomedical Advanced Research and Development Agency. It was also based on understanding how pharmaceutical companies operate and make decisions and what the factors are that lead to such long delays in normal drug development processes.

When I worked with my colleagues at the Department of Health and Human Services, the Department of Defense, and the White House to architect Operation Warp Speed, Congress had just appropriated over $2 trillion for COVID relief and response. My thesis was that literally any amount of money we could spend to bring vaccines and therapeutics faster would have essentially an infinite return on investment. So I told the teams to take money off the table and be limited only by the laws of science and what is physically possible. This is how we moved to Warp Speed. Not by cutting any corners on safety and efficacy, but by removing the normal delays that are built into the system to mitigate financial, scientific, technical, and execution risk.

We placed multiple bets to spread our risk, investing in six vaccine candidates, two in each of three technological platforms to create redundancy. Where manufacturers needed it, we fully funded all stages of development up front. By funding some of the largest vaccine clinical trials in history, we powered our studies to deliver statistically significant results faster than anyone ever could have imagined. We moved immediately to commercial-scale vaccine production of tens of millions of at-risk doses, even before we knew if the vaccines would work. We stood up or expanded twenty-seven separate manufacturing and fill finish facilities in less than seven months, securing equipment, raw materials, and labor for these facilities through the use of our Defense Production Act authorities. We guaranteed the purchase of vaccine, buying 900 million doses with options for another 2.1 billion, so manufacturers would know that their product would be bought, even should the virus subside, as it did with SARS, MERS, and ZIKA, before vaccines could come to market. In the spring of 2020, we secured over 1 billion needles and syringes, as well as hundreds of millions of vials, and then worked to have them kitted, with plans to deliver them such that vaccinations could take place immediately. Our distribution partners delivered vaccines with over 99.9% on-time quality performance, with extremely delicate cold chain product. We developed the most sophisticated vaccine tracking system in the world and deployed it in less than five months. We enrolled and electronically linked 50,000 vaccination locations. But, of course, the most important thing we did was to empower and support the world’s best scientists, logisticians, engineers, clinicians, and operators in the government and in the private sector. And none of this could have happened without our heroic clinical trial volunteers.

In mere months from this pandemic’s hitting our shores, through the collective efforts of government agencies, our biopharmaceutical partners, and countless companies in the supply chain and distribution system, Operation Warp Speed was able to deliver millions of doses of novel therapeutics and tens of millions of doses of some of the safest and most effective vaccines we’ve ever seen. It was the fastest vaccine development program in human history by years. By the first half of this year, we had produced and procured enough vaccine for every American who wanted to be vaccinated. A slim majority of Americans are now fully vaccinated, but many more need to get vaccinated. I hope all of you will encourage your friends and family to get vaccinated. The Biden Administration has made additional purchases from these programs. As we now have a large surplus of supply, America is in a position to make vaccines available around the world, continuing our legacy as the single largest funder and supporter of global health security on earth.

Our struggle is not over; many are still suffering and dying here and around the world. But thanks to our collective efforts, we have the tools to see the end of the darkest days of this pandemic.

If I may so presume, on behalf of a grateful nation, I extend my warmest appreciation and congratulations to the leaders of Pfizer, BioNTech, and Regeneron on their receipt of the Ecumenical Patriarch Athenagoras Human Rights Award.

Thank you all very much.