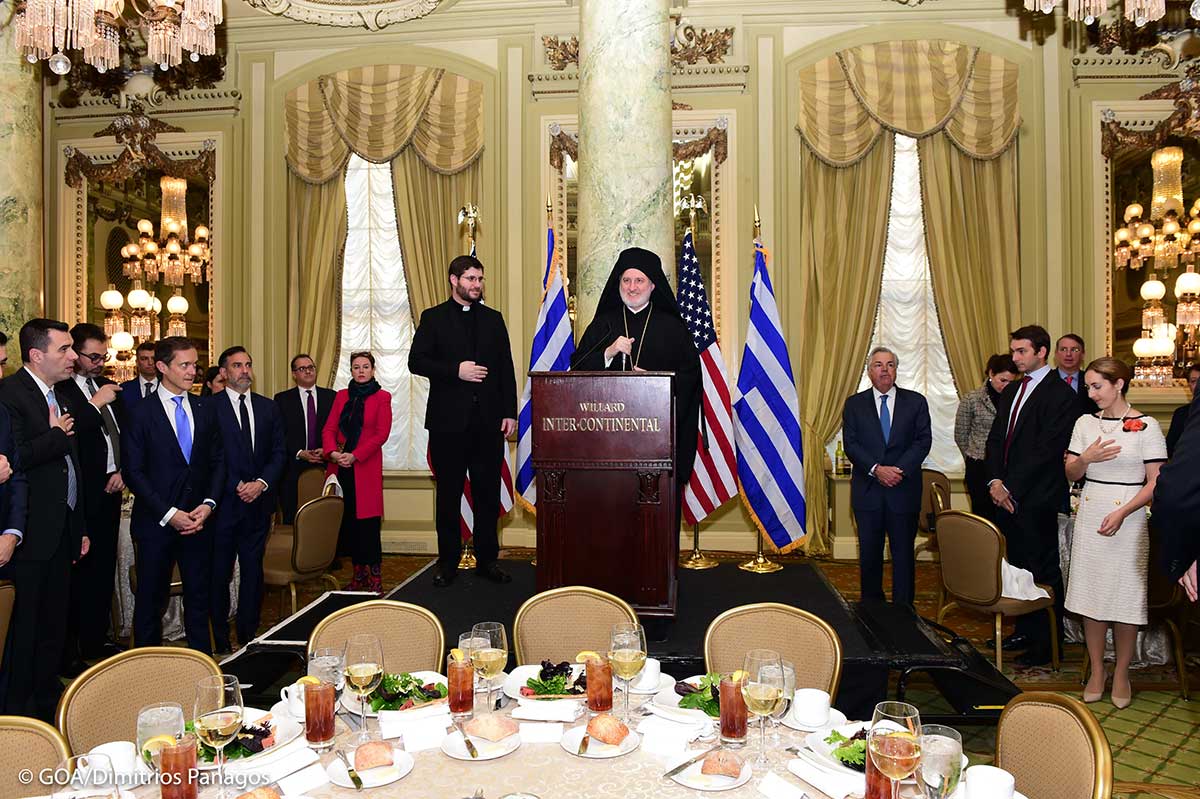 With the blessing of His Eminence Archbishop Elpidophoros of America, the Order of Saint Andrew the Apostle, on January 8, 2020, co-sponsored a Luncheon in Washington, D.C. in honor of His Excellency Kyriakos Mitsotakis, Prime Minister of the Hellenic Republic and his wife, Mrs. Mareva Mitsotakis. 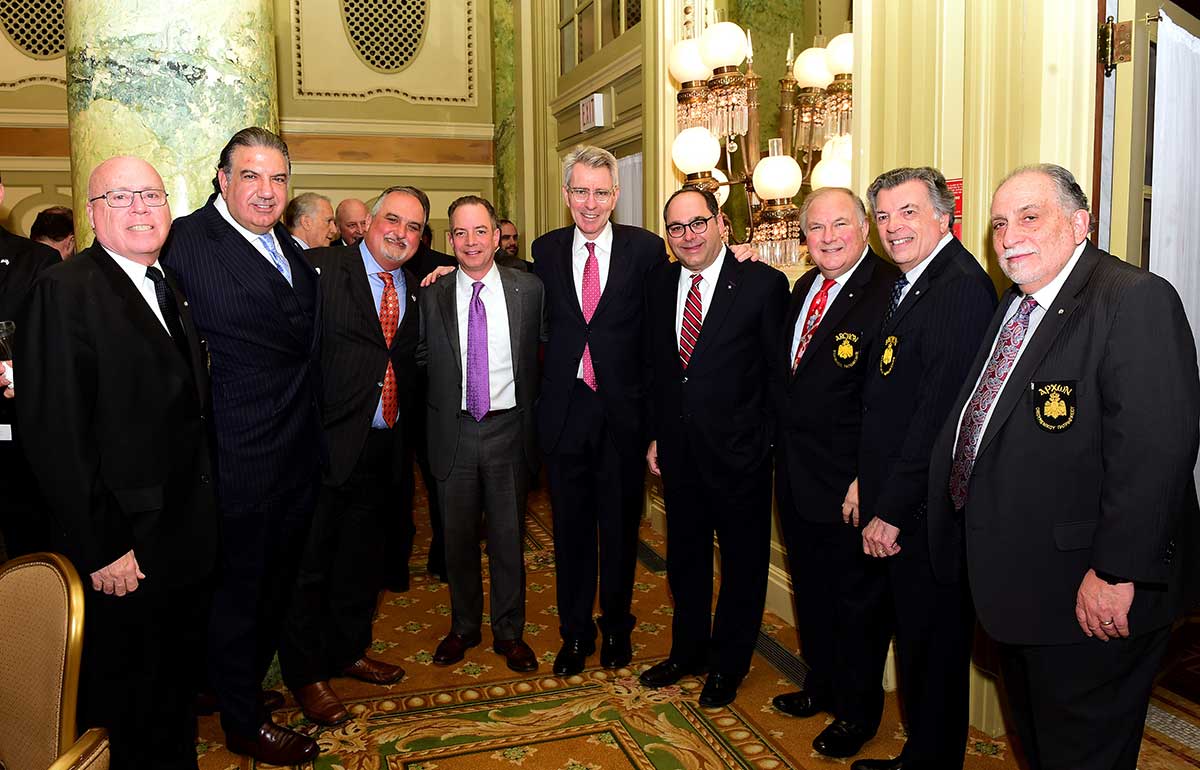 At the Luncheon, the Delegation had the opportunity to greet His Eminence Archbishop Elpidophoros and Prime Minister Mitsotakis, who each gave inspiring addresses, and to engage in meaningful discussions on religious freedom issues for the Ecumenical Patriarchate and all Faiths with many dignitaries, including Ambassador Sam Brownback, Ambassador-at-Large for International Religious Freedom, Ambassador Geoffrey Pyatt, U.S. Ambassador to Greece, and Reince Priebus, former White House Chief of Staff. 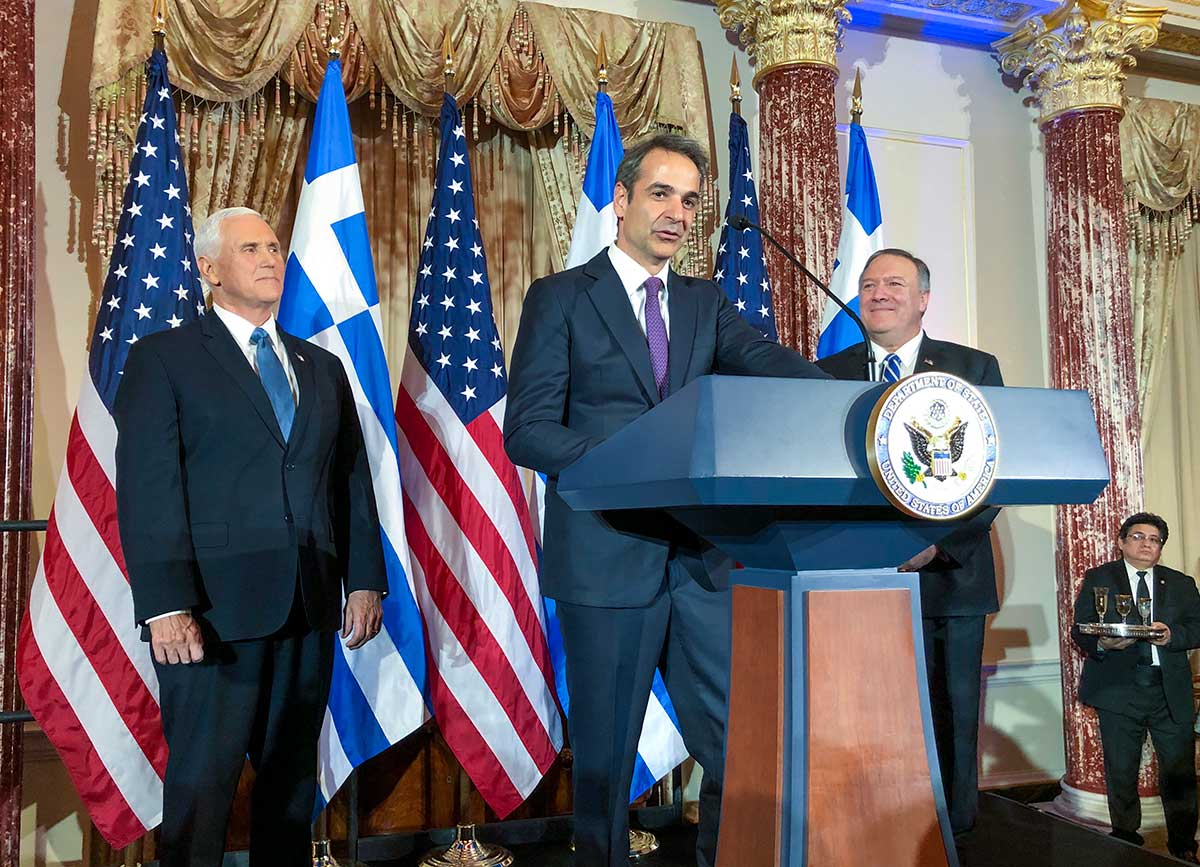 His Excellency Kyriakos Mitsotakis, Prime Minister of the Hellenic Republic, with Vice President Mike Pence and Secretary of State Mike Pompeo at a reception held at the U.S Department of State. (Photo by A. Limberakis)

That evening the Delegation attended a State Department Reception at the U.S Department of State honoring Prime Minister Mitsotakis and his wife Mrs. Mareva Mitsotakis led by Vice President Mike Pence and Secretary of State Mike Pompeo who each spoke of the important and steadfast relationship between the United States and Greece. During the event, the Delegation also had the opportunity to continue discussions on religious freedom issues with political and government leaders from the United States and Greece and the National Commander addressed the Order’s key religious freedom issues with Vice President Pence and Secretary of State Pompeo.

The following day, on January 9, 2020, the delegation held a number of strategy meetings with White House and Congressional leaders to discuss religious freedom issues and the upcoming visit in May 2020 of His All-Holiness Ecumenical Patriarch Bartholomew to Washington D.C., including His All-Holiness’ meetings with President Trump, government leaders and planned receptions. 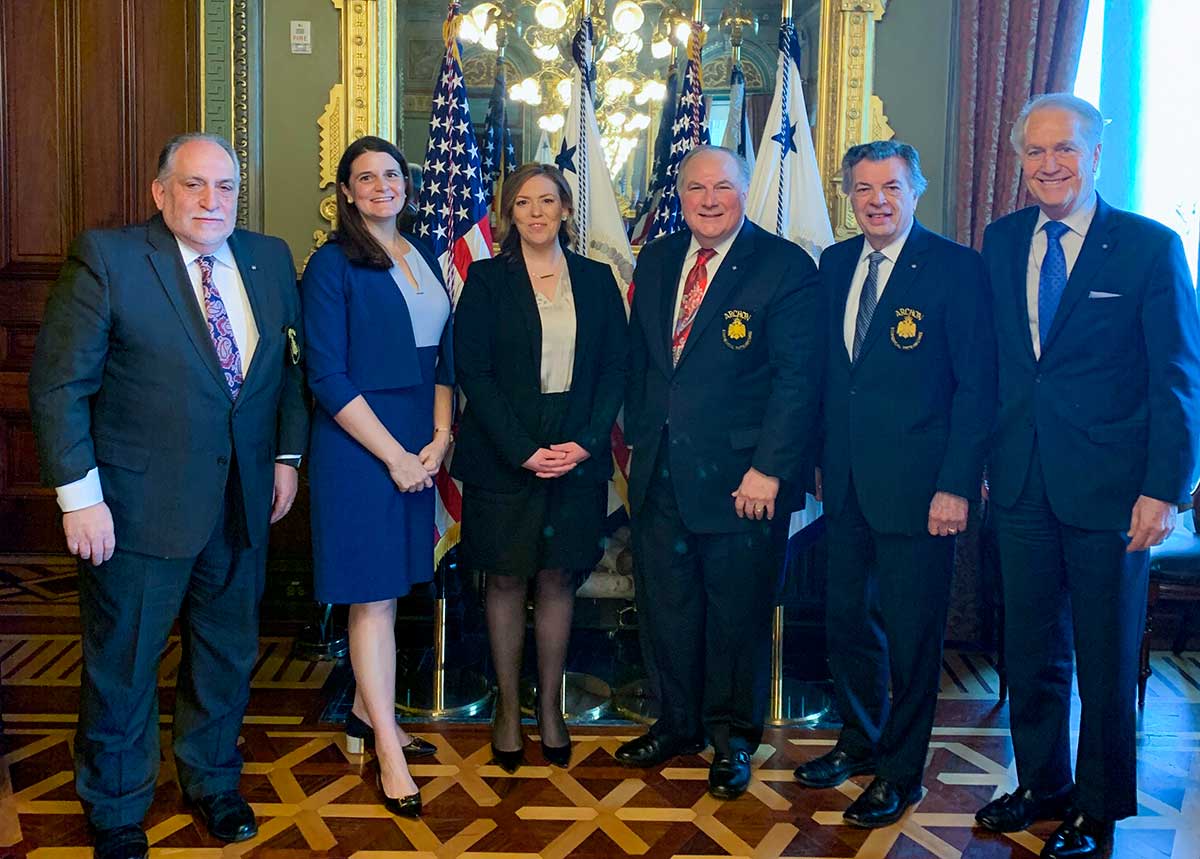 The Delegation with White House point persons on religious freedom, at the Vice President's offices. 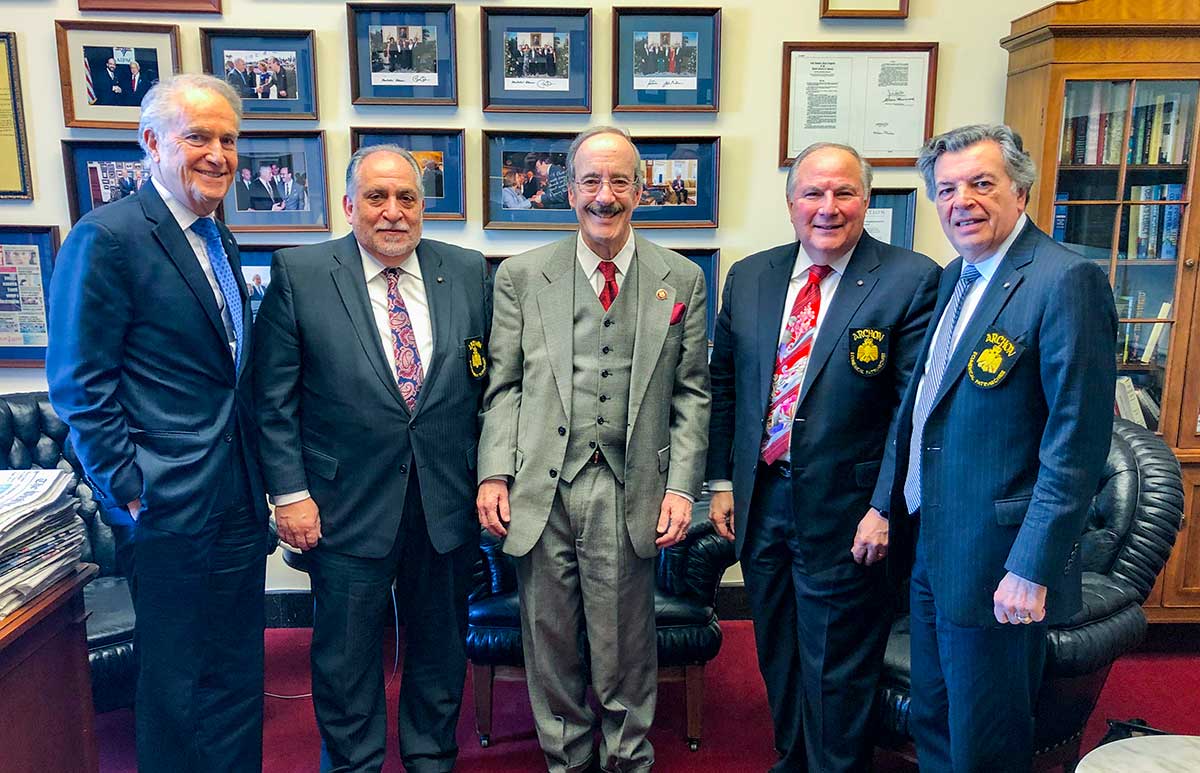 Thereafter, the Delegation met with Congressman Eliot Engel, Chairman of the House Foreign Affairs Committee to address His All-Holiness’ upcoming visit and the ongoing suppression of religious freedom for the Ecumenical Patriarchate in Turkey. Discussions focused on the personal safety of His All-Holiness Ecumenical Patriarch Bartholomew and the threat of President Erdogan to convert Hagia Sophia, the Great Church of Christ, from a museum into a mosque. These issues were further discussed and detailed in a meeting with Damian Murphy, Senior Policy Advisor to the Senate Foreign Relations Committee. Both Congressman Engel and Senate Policy Advisor Murphy are very familiar with the key issues, and offered proposals to further the efforts for religious freedom in support of the Ecumenical Patriarchate as they look forward to His All-Holiness’ upcoming visit to Washington, D.C. 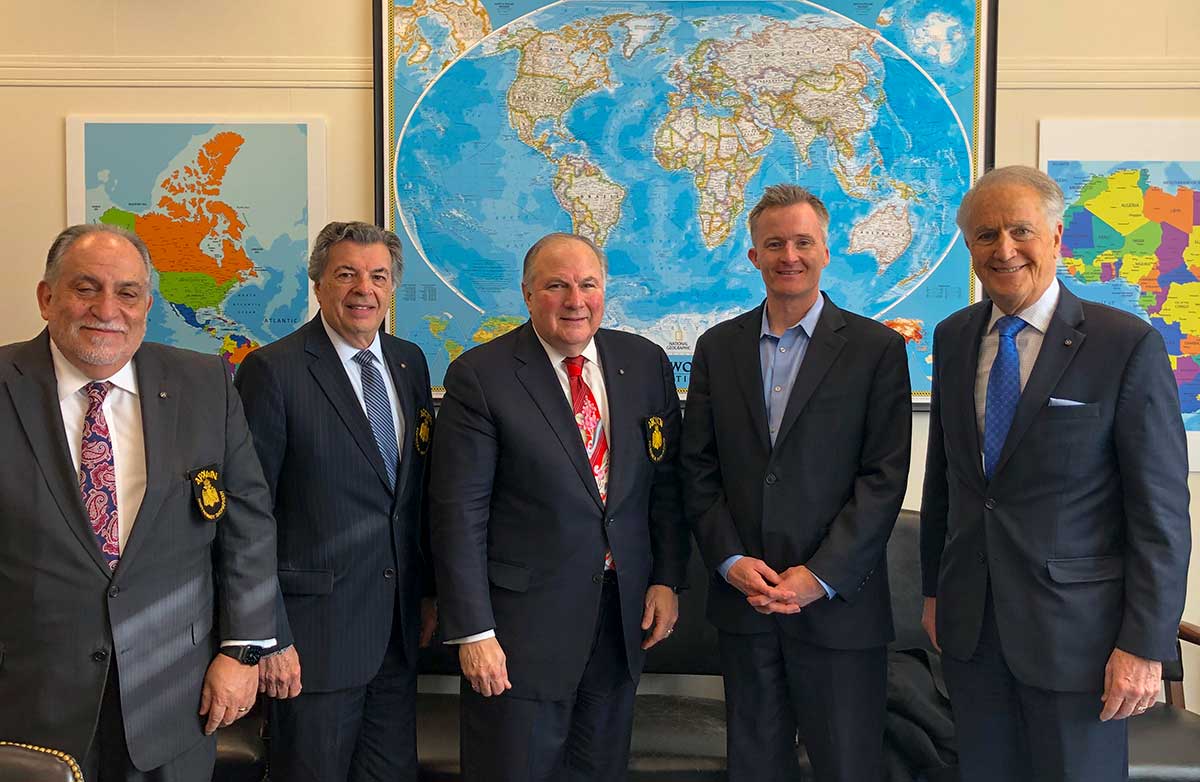 On behalf of the Order and the delegation, the National Commander concluded the day’s activities by recognizing the importance of these meetings held in advance of His All-Holiness’ upcoming visit and the Order’s gratitude for the spiritual leadership of His Eminence Archbishop Elpidophoros as Exarch in advocating for and in support of the religious freedom of the Ecumenical Patriarchate.