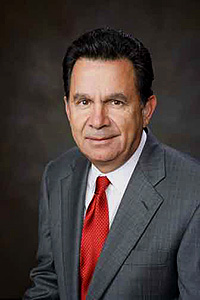 With the blessing of His Eminence Archbishop Demetrios of America, Exarch of the Ecumenical Patriarchate, and pursuant to the Archon governing Bylaws, Christopher J. Pappas, Archon Prostatis Ton Grammaton, of Annunciation Cathedral in Houston, Texas, has been appointed Regional Commander for the Archons of the South Central United States region.

"Archon Pappas has been an active member of the Order of Saint Andrew since 2008 and was indispensible in securing the passage of the religious freedom resolutions for the Ecumenical Patriarchate in the Texas State Senate and Texas State House of Representatives," National Commander Dr. Anthony J. Limberakis said. "His commitment to the Holy Mother Church of Constantinople is exemplary. AXIOS!"

Archon Chris, a member of Leadership 100, has over 30 years of operational management experience in the restaurant industry and is actively involved both in the general operations of all of the Pappas restaurants and in the development of new sites and concepts.

Archon Chris received his Bachelor's degree in Mechanical Engineering from The University of Texas at Austin. He and his wife, Maria, have been married 30 years and have five grown children.