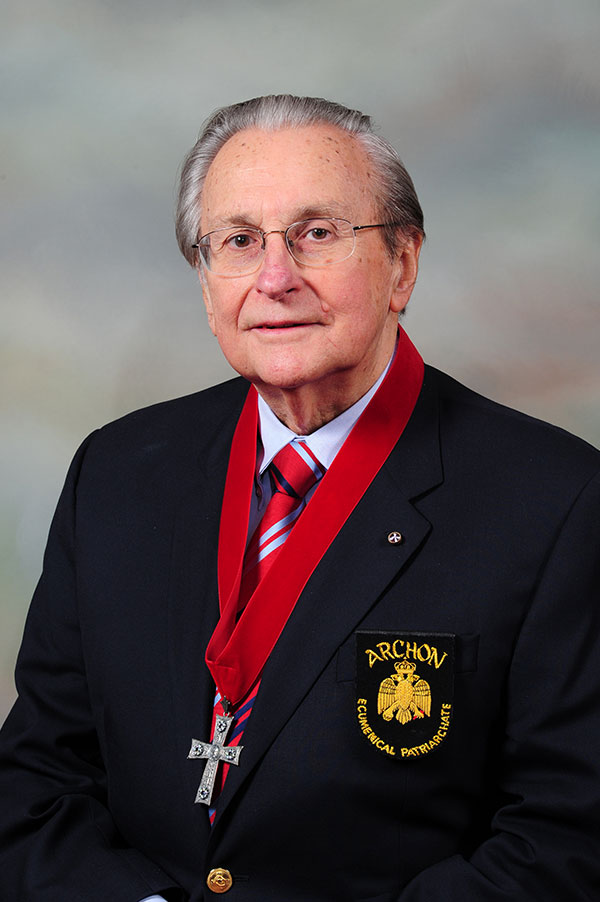 New York, NY - Archon Ekdikos John Halecky, Jr. was unanimously elected by the National Council of the Order Saint Andrew to the office of National Vice Commander, with the blessings of His Eminence Archbishop Demetrios of America, Exarch of the Ecumenical Patriarchate and at the nomination of the National Commander Dr. Anthony J. Limberakis.  The office of National Vice Commander was left vacant for a period of one year in memory and in extraordinary and unprecedented tribute to Archon Depoutatos Nicholas J. Bouras who held the office from 1998 to 2013.  The election took place on December 11, 2014 at the first regular National Council meeting following the Annual Meeting of Archons, in accordance with the Bylaws. Archon Halecky of Carpatho-Russian heritage and the recipient of the 2012 Nicholas J. Bouras Award for Extraordinary Archon Stewardship, brings to the office a sense of ecumenism, spiritual vitality as the impetus for the establishment of the Annual Archon Lenten Retreat and unparalleled and steadfast devotion to the Holy and Great Mother Church of Constantinople.  It will be an honor to work closely with Archon John as we continue our relentless quest for religious freedom for the Ecumenical Patriarchate,” states the National Commander.

John Halecky, Jr. has been an Archon of the Ecumenical Patriarchate, Order of Saint Andrew the Apostle, for 33 years.  He has served on the National Council of the Order since 1987 and as Secretary since 1998 and is a member of the Council’s Executive Committee.  During his tenure on the National Council, he has been intimately involved in virtually all the major initiatives of the Archons for a quarter century.

Most notably, he was chosen by His All-Holiness, Patriarch Bartholomew, as a member of the official delegation of the Ecumenical Patriarchate for the reception of the relics of Saint Gregory the Theologian and Saint John Chrysostom from the Vatican during the Thronal Feast of Saint Andrew in 2004.  He was a participant in the groundbreaking 2010 symposium “Religious Freedom: Turkey’s Bridge to the European Union” held at the European Parliament in Brussels, Belgium during November 2010.  John frequently speaks to Orthodox Church groups regarding the mission and activities of the Order of Saint Andrew and religious freedom as it pertains to the Ecumenical Patriarchate.

For 25 years, he served as a member of the Diocesan Board of Trustees and Financial Secretary of the American Carpatho-Russian Orthodox Diocese and as a Trustee of Christ the Savior Seminary, located in Johnstown, Pennsylvania.  During his tenure, he was instrumental in initiatives including establishment of the diocesan clergy pension program and development of Camp Nazareth, a youth camp, retreat and conference center, located in Mercer, Pennsylvania. He has served as a Trustee and President of the Parish Council of Saint Nicholas Orthodox Church in Elizabeth, New Jersey and previously as Parish Council President and Choir Director of Saint Mary’s Orthodox Church in Bayonne, New Jersey.  Mr. Halecky is a recipient of the “Bohorodica” (Theotokos) Award for outstanding service to the Carpatho-Russian Diocese by laymen.

He was conferred the title of Archon Ekdikos by Bishop John (Martin) of Nyssa in 1982 becoming one of the first three Archons of the Carpatho-Russians, at Christ the Savior Cathedral in Johnstown, Pennsylvania with His Eminence Archbishop Iakovos presiding.

During his business career, his focus has been in finance having served as Executive Vice President, Chief Financial Officer and a Director of Comstock Group, an industrial services company; President of Elkcom Leasing; Chief Operating Officer of Fischbach Corporation and Principal of Peninsula Associates, a management consulting firm.  He is a graduate of Rutgers University and a veteran of the United States Army.

Mr. Halecky and his wife, Sonia, have been married for 55 years and reside in Summit and Avalon, New Jersey.  They are parents of John Halecky, III (Archon Notarios) and Nadine, wife of Silvio Quaglia, M.D., and have four grandchildren: Justin, Amanda, Jennifer and Cassandra.