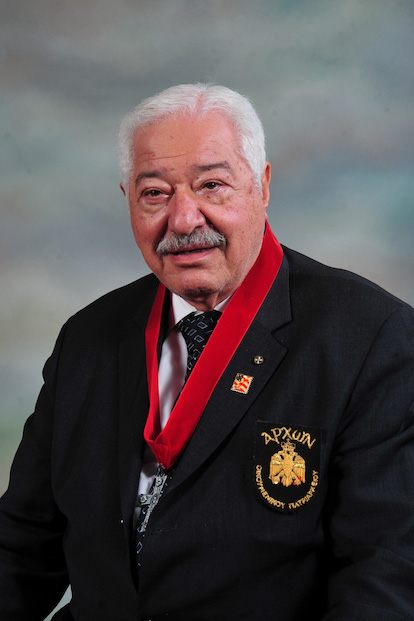 New York, NY - The Order of Saint Andrew the Apostle is pleased to announce that Archon Judge Nicholas Tsoucalas, Archon Hartoularios, has been nominated as the recipient of this year’s Nicholas J. Bouras Award for Extraordinary Archon Stewardship. A special tribute dinner dance will be held at the New York Hilton Hotel, Friday evening, Oct. 16, as part of the Order's annual three-day assembly, Oct. 16-18.

Archon George Safiol, Award Committee chairman, said, "Archon Tsoucalas has exemplified tremendous stewardship of time, talent and resources in support of the Mother Church of Constantinople, the Orthodox Christian Church throughout the United States, and to the mission of the Order of Saint Andrew in which all Christians should be granted religious freedom rights. Our committee deemed it appropriate to recognize his efforts and name him as the recipient of this prestigious Award in recognition of the extraordinary service exemplified by National Vice Commander Bouras."

One of five children of George M. and Maria (Monogenis) Tsoucalas, Nicholas was born on August 24, 1926 in New York City and educated in its public elementary and secondary schools. While attending them, he also worked in the restaurant his father owned and operated for 40 years at Broadway and West 145th Street in Manhattan, Le Petit Paris.

In 1944, Nicholas joined the U.S. Navy and served as a radio operator on APD and transport vessels in the European theater of World War II, as well as the Caribbean and North Atlantic. Upon returning home, he enrolled in Kent State University, Ohio, earning a Bachelor of Science degree in Business Administration in 1949.  He subsequently entered New York Law School, receiving his LL.B. in 1951. That same year, Nicholas was recalled into the Navy, serving during the Korean Conflict aboard an aircraft carrier, the USS Wasp.

Following that service, in April 1953, Nicholas was admitted to the New York Bar and began practicing law, specializing in immigration and admiralty matters. He also attended New York University School of Law for graduate courses in Immigration Law and Federal Practice and Procedure. From 1955 to 1959, Nicholas was an Assistant U.S. Attorney for the Southern District of New York. he was also appointed to supervise the 1960 Census for New York's 17th and 18th Congressional Districts and as Chairman of the Board of Commissioners of Appraisal, Neversink Riparian Rights.

President Reagan nominated Judge Tsoucalas to the Court of International Trade, which nomination was confirmed by the U.S. Senate in June 1986. In addition to his judicial duties with this Court, Judge Tsoucalas has served as a visiting judge in U.S. district courts throughout the country and in the U.S. Court of Appeals for the Second circuit. He became a Senior Judge on September 30, 1996.

Judge Tsoucalas grew up attending Saint Spyridon Church in Washington Heights, NY. He played on the Church's basketball team from 1941-44 and became the Youth Director 1943-44. He was an active member until 1954.

After marrying his wife, Catherine (Aravantinos) Tsoucalas in 1954 at the Archdiocesan Cathedral of the Holy Trinity in New York, they began attending the Evangelismos Church. Judge Tsoucalas served as Parish Council President 1955-59 and then served on an Advisory Committee until 1964. During his involvement with Evangelismos, the Church was expecting a new iconostasis from Greece. The U.S. government was seeking an import tax on the iconostasis. Judge Tsoucalas represented the Church in the U.S. Customs Court and won.

In 1964, Judge Tsoucalas and his wife moved to Queens, NY and began attending the Transfiguration Church in Corona, NY. He was an active parish member and joined the Men's Club. They also began attending St. Nicholas Church in Flushing, NY in 1977 but remained active in both Churches.

In 1996, Archbishop Spyridon appointed Judge Tsoucalas and others on an Advisory Committee at Transfiguration in which he served on the committee for several years.

Judge Tsoucalas was named an Archon with the offikion Hartoularios in March 1987. He is a member of the National Council and was appointed as a chairman of the Nominating Committee in 1998 and continues to serve this post proudly.

Judge Tsoucalas and his wife Catherine have two daughters, Stephanie Turriago, a teacher in the New York public schools, and Georgia Argyrople, an attorney who has worked for the American Cancer Society. Judge Tsoucalas also has five grandchildren, Victoria, Nicholas, Catherine, Vivian and Christina.

The Award is named after the late National Vice Commander Nicholas J. Bouras, Archon Depoutatos, who himself has demonstrated remarkable leadership as a faithful son of the Ecumenical Patriarchate and exemplary steward of the Greek Orthodox Archdiocese of America.