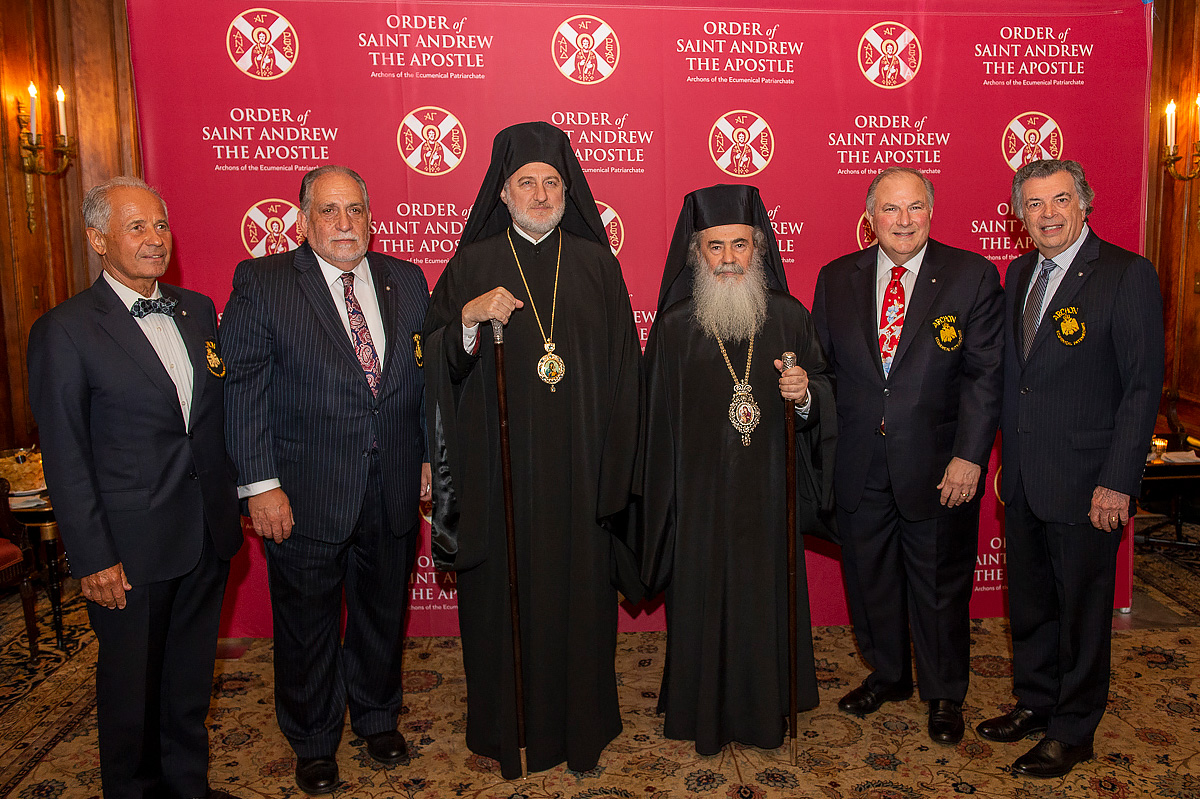 His Eminence Archbishop Elpidophoros of America and His Beatitude Patriarch Theophilos III of Jerusalem with members of the Executive Committee of the Order of Saint Andrew the Apostle.
© J. Mindala

On Tuesday, July 16, 2019, the Order of Saint Andrew the Apostle held a dinner in honor of Archbishop Elpidophoros of America, with a special guest in attendance, His Beatitude Patriarch Theophilos III of Jerusalem. The dinner was held in Washington during the U.S. State Department Religious Freedom Ministerial Week.

The timing and location of this dinner was particularly important in light of the fact that the persecution of Christians worldwide continues to escalate, and is now as widespread as it is unnoticed.

In addition to Archbishop Elpidophoros and Patriarch Theophilos, in attendance were His Eminence Archbishop Yevstratty, Ukrainian Orthodox Archbishop of Chernihiv; Fr. Alex Karloutsos, Order of St. Andrew Spiritual Advisor and Vicar General of the Greek Orthodox Archdiocese; Congressman Gus Bilirakis (R-FL); members of the Trump Administration; and members of the diplomatic corps, as well as numerous Archons and other distinguished guests.

His Eminence Archbishop Elpidophoros addressed His Beatitude Patriarch Theophilos, saying: “Your Beatitude, on behalf of all those assembled, please accept our profound respects, love, and appreciation for the role that you play in the protection – not only of the Orthodox Christians of the Holy Land and Jordan, but of all those who bear the Name of Christ throughout the Middle East.”

Archbishop Elpidophoros also noted: “This week, we are participating in this ‘Ministerial to Advance Religious Freedom.’ A thousand participants from the world over have gathered here in the Nation’s Capital to advance the cause of religious freedom for every human person, and we all know how much the esteemed Order of Saint Andrew has done in this regard. It is significant to note that the opening of the Ministerial took place at the U.S. Holocaust Memorial Museum, and the closing will be at the National Museum of African American History and Culture. In the former we remember those who perished from an ethnic and religious hatred; in the latter we commemorate those in our own land who endured the inhumanity of slavery and subsequent racial discrimination. Although nearly every people of the world has suffered oppression, hatred, and even genocide at one time or another, it is our fervent pledge that we will never stand for such to happen anywhere again.”

The Archbishop added: “Therefore, we must see our goals for the Diaspora and for our all our Orthodox Christian Homelands in this bright and shining light – the light of liberty of conscience and freedom of worship. Whether it be in Constantinople or Jerusalem, in Greece or Ukraine, in Cyprus or Egypt, in Syria or Israel – our duty is to speak truth to power with love and with authority, even as the Lord spoke the Message of the Kingdom during His earthly ministry.”

Dr. Limberakis praised Archbishop Elpidophoros’ tireless work for the Ecumenical Patriarchate and the Church in general, noting in particular his efforts on behalf of Autocephaly for the Orthodox Church in Ukraine: “His clarion voice in the magnificent book he authored in advocacy of Ukrainian Autocephaly which supported the brilliant and just decision of His All-Holiness was a tour de force… And yes, Ukrainian Autocephaly is a statement in support of Religious Freedom!”

Dr. Limberakis added: “We are especially honored this evening with the presence of His Beatitude Theophilos III, the Patriarch of Jerusalem where the very birthplace of Christianity is being threatened with the complete asphyxiation of the Christian Community.”

Explaining the urgency of the Ministerial, Dr. Limberakis said: “Whether you look at the Middle East, or Africa, or Asia, the countries of Syria, Iraq, Iran, Afghanistan, Egypt, Turkey, Yemen, China, Pakistan, India… it’s horrific that Christians are persecuted globally. According to our own State Department, Christians face persecution in more than 60 countries around the world, that’s more than one out of every three countries in existence today. Stated another way, although Christians comprise only 30% of the world’s population, 80 percent of all acts of religious discrimination are directed at Christians.” He also said that “the Order of St. Andrew commends President Trump, Secretary Pompeo and Ambassador for International Religious Freedom Brownback for organizing this Ministerial in which over 1000 individuals representing 130 countries are participating to focus attention on religious persecution and deliberating on the ways and means this evil can be contained and ultimately overcome.”