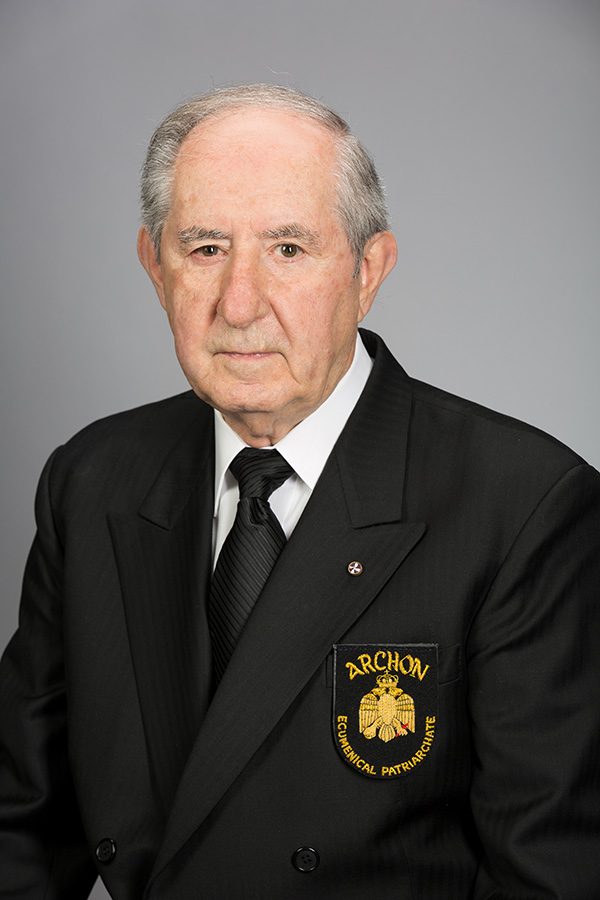 The Order of Saint Andrew the Apostle is pleased to announce that Archon Theofanis V. Economidis, Archon Ekdikos, has been designated as the recipient of this year's Nicholas J. Bouras Award for Extraordinary Archon Stewardship. A special tribute dinner dance will be held at the New York Marriott Marquis Hotel, Friday evening, Oct. 14, as part of the Order's annual three-day assembly, Oct. 14-16.

Archon George Safiol, Award Committee chairman, said, "Archon Economidis has exemplified tremendous stewardship of time, talent and resources in support of the Mother Church of Constantinople, the Orthodox Christian Church throughout the United States, and to the mission of the Order of Saint Andrew in which all Christians should be granted religious freedom rights. Our committee deemed it appropriate to recognize his efforts and name him as the recipient of this prestigious Award in recognition of the extraordinary service exemplified by National Vice Commander Bouras."

Born in Dessylla, Messenias, Greece he graduated from the Greek Military Cadet Academy (Scholi Evelpidon) in 1958 and served as an artillery officer of the Greek Army until 1968. He emigrated to the U.S. in 1969 where he subsequently earned a Bachelor of Science degree in Computer Science from the University of California, Los Angeles (UCLA), a Master of Science in Electrical Engineering from Stanford University and pursued postgraduate studies at Stanford in Management Systems. He has lectured occasionally at Stanford and authored several publications in the computer field. He is a member of the Institute of Electrical and Electronics Engineers and past Chairman of the Computer Society of Northern California. From 1971 to 1982 Mr. Economidis served at the National Aeronautics and Space Administration (NASA), where he was a key contributor to the Space Shuttle and several other programs of national importance. In 1986 he joined TRW Inc. (now known as Northrop-Grumman) in Sunnyvale, California where he served as an executive specializing in national security electronic systems. He retired from TRW in 2001.

Mr. Economidis has been an active member of the Greek American Community including: Past President of the United Hellenic Societies Federation of Northern California; Founding member and Chairman of the Board of the Elios Society since its inception for sixteen years ; President of the Board of Hellenic Journal, the only Greek American newspaper west of Chicago; Member of the Metropolis Council of the Greek Orthodox Metropolis of San Francisco for over thirty years where he has been serving as Vice President since 1996; and Member of the Board and Managing Director of St. Nicholas Ranch and Retreat Center.

Mr. Economidis is the recipient of numerous citations and awards for church and community contributions including: the Cross of Axum (Patriarchate of Ethiopia) for leading the effort to raise funds (over $75,000) and personally delivering this aid to the starving people of Ethiopia in 1985 and for arranging, during the famine, the delivery of 4,500 metric tons of food supplies to the Church of Ethiopia; the Pope Paul VI and Metropolitan Meliton Medallion for his efforts to promote and protect the rights of the Ecumenical Patriarchate to function as a free institution; two citations by the Senate of the State of California for his exemplary record of civic leadership; and many distinctions from local and national Greek American organizations for his philanthropic accomplishments and commitment to Hellenic ideals including the AXION Award from the Hellenic American Professional Society in 1985. He is the 1999 recipient of the Ellis Island Medal of Honor Award and has also been featured in Public Broadcasting Corporations' (PBS) 1999 documentary "The Greek Americans II, Passing the Torch".

In March 2013, he was honored with the inaugural Theofanis Economidis Award by the Greek Orthodox Metropolis of San Francisco for his extraordinary leadership. This award was presented at a Gala event attended by Governor Jerry Brown, Congresswoman and Minority Leader Nancy Pelosi, and San Francisco Mayor Ed Lee. The Theofanis Economidis Award subsequently is being presented at a biennial event of the Metropolis of San Francisco to a distinguished individual in honor of their leadership, inspirational vision, hard work, and humble service to Jesus Christ and His Holy Church.

In July 2015, the Order of AHEPA held its Supreme Convention in San Francisco. At the Grand Banquet and in the presence of His Eminence Archbishop Demetrios, Geron of America, AHEPA bestowed upon Mr. Economidis the Aristotle Award for his leadership and work for the preservation of our faith and perpetuation of Hellenism.

In 1968 Fanis married Cynthia (Efstathia) Bagles from Sheboygan, Wisconsin and they enjoyed 46 years of marriage until her passing in 2014. Cynthia had a prestigious 34-year tenure of service at the University of Wisconsin - Milwaukee where she was a professor in The Helen Bader School of Social Welfare. They have one daughter, Roberta (Hariklia), who is a prominent attorney in San Francisco.

The Award is named after the late National Vice Commander Nicholas J. Bouras, Archon Depoutatos, who himself has demonstrated remarkable leadership as a faithful son of the Ecumenical Patriarchate and exemplary steward of the Greek Orthodox Archdiocese of America.