The Order of Saint Andrew the Apostle is pleased to announce that Archons James C. Fountas, National Treasurer, and John Halecky, Jr., National Secretary, have been nominated as recipients of this year’s Nicholas J. Bouras Award for Extraordinary Archon Stewardship.  A special tribute dinner dance will be held at the New York Hilton Hotel, Friday evening, Oct. 19, 2012, as part of the Order's annual three-day assembly, Oct. 19-21.

Archon George Safiol, Award Committee chairman, said, "Archons Fountas and Halecky have exemplified tremendous stewardship of time, talent and resources in support of the Mother Church of Constantinople, the Orthodox Christian Church throughout the United States, and to the mission of the Order of Saint Andrew in which all Christians should be granted religious freedom rights. Our committee deemed it appropriate to recognize their efforts and name them as recipients of this prestigious Award in recognition of the extraordinary service exemplified by National Vice Commander Bouras." 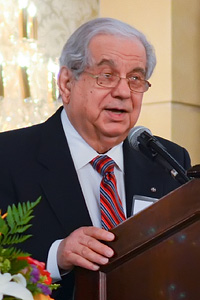 Archon James C. Fountas of Holy Trinity Greek Orthodox Church in Westfield, NJ, was invested as an Archon in 1981 and conferred with the offikion, Depoutatos.  He has served on the National Council and as Treasurer of the Order for the last 15 years.

Serving the Church locally and nationally, he has been a member of the Parish Council since 1977 and served two terms as Parish President and eight years as Parish Secretary and Treasurer.  Archon Fountas was awarded the Archdiocesan Medal of Saint Paul in 1980.  He co-chairs the annual Holy Trinity Golf Classic since its inception, which will celebrate it's 30th anniversary this year, in which proceeds are donated to local charities and philanthropic institutions. He has served as Vice-Chairman of the Council of the Metropolis of New Jersey for the past eight years and as a member of the Archdiocesan Council since 2000.  He was also appointed a member of the New Jersey Hellenic American Heritage Commission by the Governor of New Jersey in 2009.

Archon Fountas is retired from the United States Gypsum Company in 1998 after serving 45 years as an executive, managing manufacturing facilities on the East Coast after service at the Corporate offices in Chicago and Division offices in New York.

He was activated for military service during his employment and served as a 1st Lieutenant in the U.S. Army with service in Korea.

He and his wife Jean will be celebrating their 53rd wedding anniversary in November and have a son, Christopher. 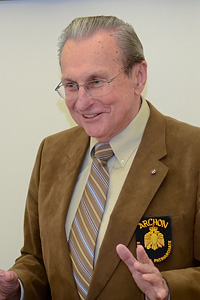 Archon John Halecky, Jr. of Saint Nicholas Orthodox Church (Carpatho-Russian Diocese) in Elizabeth, NJ was invested as an Archon in 1982 and conferred with the offikion, Ekdikos. He has also served on the National Council of the Order for the last 15 years and as National Secretary since 1998. He was chosen by His All-Holiness Ecumenical Patriarch Bartholomew, as a member of the official delegation of the Ecumenical Patriarchate for the reception of the relics of Saint Gregory the Theologian and Saint John Chrysostom from the Vatican during the Thronal Feast of Saint Andrew in 2004.

For 25 years, he served as a member of the Diocesan Board of Trustees and Financial Secretary of the American Carpatho-Russian Orthodox Diocese and as a Trustee of Christ the Savior Seminary, in Johnstown, PA.  He has served as a Trustee and President of his Parish Council, and previously as Parish Council President and Choir Director of Saint Mary’s Orthodox Church in Bayonne, NJ.  Archon Halecky was on the Advisory Committee of the Monastery of the Annunciation in Tuxedo Park, NY and is a recipient of the “Bohorodica” (Theotokos) Award for outstanding service to the Carpatho-Russian Diocese by laymen.  He is also an active member of Saint Demetrios Greek Orthodox Church in North Wildwood, NJ.

During his business career, Archon Halecky’s focus has been in finance having served as Executive Vice President, Chief Financial Officer and a Director of Comstock Group, an industrial services company; President of Elkcom Leasing; Chief Operating Officer of Fischbach Corporation and Principal of Peninsula Associates, a management-consulting firm. He is a graduate of Rutgers University.

Archon Halecky and his wife, Sonia, have been married for 53 years and reside in Avalon and Summit, NJ.  They are parents of John Halecky, III and Nadine, wife of Silvio Quaglia, M.D., and have four grandchildren: Justin, Amanda, Jennifer and Cassandra.

Dr. Anthony J. Limberakis, National Commander of the Order, stated, “These two men have been intimately involved in virtually all the major initiatives of the Archons for a quarter century. They have played major roles as organizers and participants in the groundbreaking International Archon Religious Freedom Symposium held in November 2010 at the European Parliament in Brussels, Belgium and are assisting in preparations for the 2013 Symposium slated to be held in Berlin. Their contributions of time, talent and treasure for the Ecumenical Patriarchate and the Order of Saint Andrew have earned them as worthy recipients of this prestigious Award. Axios! Axios! Axios!”

The Nicholas J. Bouras Award is presented annually to an individual who has demonstrated extraordinary and incomparable stewardship to the Order, enabling Archons to vigorously pursue securing religious freedom for the Mother Church of Constantinople.  The Award is named after Nicholas J. Bouras, current National Vice Commander, who himself has demonstrated remarkable leadership as a faithful son of the Ecumenical Patriarchate.  Archon George D. Behrakis was the recipient of the inaugural Bouras Award in 2011.