Become a part of The Archon's 2nd International Conference on Religious Freedom, Dec. 4-5 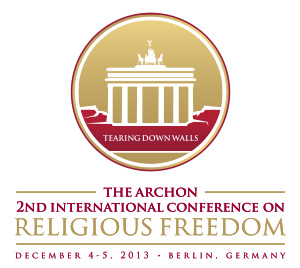 With the blessings of His Eminence Archbishop Demetrios of America, the Archons of the Ecumenical Patriarchate invite you to attend and participate in the Archon’s Second International Conference on Religious Freedom: "Tearing Down Walls: Achieving Religious Equality in Turkey." It will take place in Berlin, Germany, December 4 and 5, 2013. This important conference promises to be an extraordinary, historic and watershed event, just as the first religious freedom conference was in November 2010 at the European Parliament in Brussels, Belgium.

Once again, politicians, diplomats, human rights lawyers and advocates, scholars, religious leaders, journalists and members of minority communities will come together to see how the walls of intolerance and misunderstanding can come tumbling down, and a new future for all people of goodwill can begin.

The conference is being organized and hosted by the Order of Saint Andrew the Apostle, Archons of the Ecumenical Patriarchate in America in cooperation with the Patriarchal Liaison Office of the Orthodox Church to the European Union. The Greek Orthodox Metropolitanate of Germany, with the blessings of His Emience Metropolitan Augoustinos, is also assisting in the coordination with local political and church partners.

This historic event is open to the public.

Learn about the Conference at: conference.archons.org

Orientation & City Tour
Orientation tour including the highlights of Berlin:

Welcome Reception
In the evening, welcome reception and dinner at the Adlon Hotel

Lunch
Lunch at the Käfer Restaurant at the Bundestag (German Parliament)

VIP Reception
In the evening, a VIP reception at the US Embassy

Lunch
Lunch at the Adlon Hotel

Museum Island Tour
Morning half day tour of Museum Island including the Pergamum Museum, named after the ancient Greek city and housing the Acropolis of Pergamum, the Market Gate of Miletus, the Ishtar Gate of Babylon and other prized treasures, and one other art museum on the island.

* Itinerary is subject to change.

The above rates include the following services:

Make your reservation by contacting....