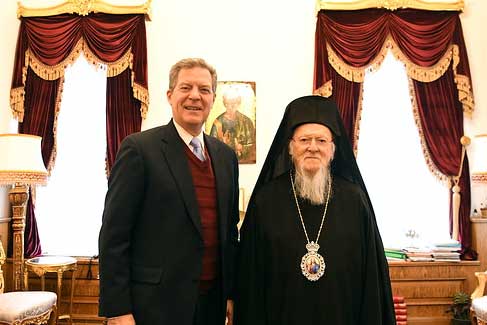 After appeals from the Order of Saint Andrew the Apostle, Archons of the Ecumenical Patriarchate, and numerous other groups to the U.S. government to act to prevent the Turkish government from turning Hagia Sophia into a mosque, this statement from Sam Brownback, Ambassador At-Large for International Religious Freedom, is extremely significant. It signals the advocacy of the U.S. government in this all-important issue of religious freedom, and holds out hope that this magnificent jewel will be preserved as part of the cultural heritage of the entire world and people of all faiths.

Ambassador Sam Brownback (@IRF_Ambassador)
[6/25/20, 08:31] The Hagia Sophia holds enormous spiritual & cultural significance to billions of believers of different faiths around the world. We call on the Govt of #Turkey to maintain it as a ⁦‪@UNESCO‬⁩ World Heritage site & to maintain accessibility to all in its current status as a museum.