Ecumenical Patriarch: “Education seems to be indifferent to the spiritual nature of man and to focus young people primarily on themselves and their needs rather than on the common good”

Print Ecumenical Patriarch: “Education seems to be indifferent to the spiritual nature of man and to focus young people primarily on themselves and their needs rather than on the common good”
Mail 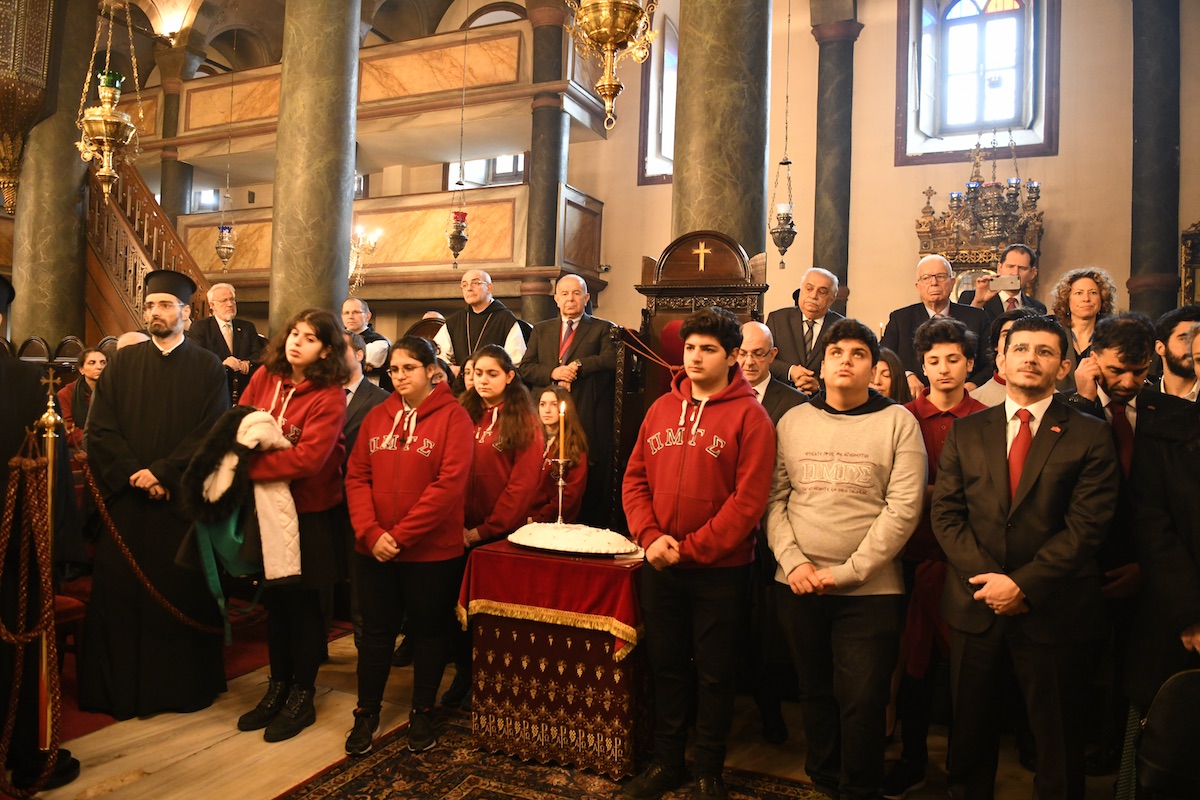 The memory of the Three Hierarchs and “Guardians of the Letters” was honored at the Holy Center of the First-Throned Orthodox Church of Constantinople today, Thursday, January 30. In his address, the Ecumenical Patriarch emphasized the importance of preserving as “the apple of the eye” the spiritual heritage of the Nation (Genous), which is “a bulwark against the corrosive tendencies of modern civilization to man and freedom,” and to transmit it to the new generation, which “is today a ‘neglected youth’ (John Chrysostom, PG 58, 504) and ‘neglecting’ its spiritual destination.”

“Unfortunately, education now seems to be indifferent to the spiritual nature of man, and young people are primarily focused on themselves and their needs rather than on the common good, on ‘success’ rather than on service. The Church is concerned with the dominant present-day ‘secularized individualistic educational system’ (Encyclical of the Holy and Great Synod, § 9), which transmits to young people, in the name of a supposedly purely humanitarian orientation of education, individualistic and hedonistic standards.

“Pedagogy should be oriented from the inexhaustible source of the wisdom of the Fathers, rather than viewing modern cultural data as a major regulatory principle. It goes without saying that the perspectives of man, his origin and destination, his well-being and freedom, his morals and culture, the ultimate outlook of his life, determine both the theory and direction of education respectively.

"The Fathers are augmented by an education that moves young people from the ‘self’ to the ‘common,’ from the ‘individual’ to the ‘person,’ from introversion to solidarity, from self-centeredness to giving. The man who is closed to his fellow human being represents according to the Fathers a particularly alienated form of human existence. On the basis of these principles, we would be able to help the new generation turn towards the essential and crucial aspects of life amid the full contradictions of modern reality. Only then will the idea of ​​the ‘teacher’ and the ‘disciple,’ the wisdom of pedagogy and the spirit of apprenticeship, be saved. Only then will education remain a ‘healing of the soul,’ a ‘sacred mission.’”

Earlier, His All-Holiness had pointed out that the Feast of the Three Hierarchs is an opportunity to return to the spiritual roots of the Nation, to draw on the “wine of piety” and to empower our good witness in the world.

“The reference to the three ecumenical theologians of the Church is indicative of our lives in the present and our path to the future. The dedication of their souls and intellect and body to Christ and the Church is remarkable, their defense of Christian doctrine, their rich theological and doctrinal education, their philanthropic activity and their interest in youth. The Fathers were expressive of a theology, faithful to tradition and open to the world, which associated practice with theory, faith with life, always at the disposal of pastoralists – ‘theological’ fishermen -- always with a specific reference to existential searching and to the eternal destination of man in Christ.

“And the encounter with Greek thought was not a theoretical hypothesis for the Fathers, but it was related to our salvation. This salutary interest has been a decisive factor in the evolution of the axis of this meeting for the history of the Church. The contact with Greek philosophy not only did not produce the ‘Hellenism of Christianity,’ as Western critics of Patristic thought claim, but led to ‘Christianism,’ ‘Churchism,’ the ‘baptism’ of Hellenism, that is, the use of philosophical concepts in the expression of the ecclesiastical experience, in ‘the innovated names.’ The position of the Fathers in this regard is the standard for our relationship with culture in general. The Christian’s attitude towards culture should not be defensive or rejective. This is the imperative of our faith, which calls us to the transformation of culture. And the necessary condition for this to happen is to know culture, to study it, to deal with it. Things do not change from a distance!

“This way of theology, with its double reference to the tradition of faith and to contemporary reality, has a timeless value and also applies to us today. And today theology is called upon to express the word of the hope within us against the signs of the times. Education is in an area that is now in constant crisis because of social change, the domination of technology and economics. We are convinced that, on the basis of the Fathers’ premises, an alternative proposal for pan-human education can be formulated. "

The Ecumenical Patriarch made special reference to the spiritual legacy of the Three Hierarchs.

“The legacy of the Three Hierarchs in the field of the education of the new generation is the education of the person. More generally, the concept of the person is the great contribution of the Fathers to culture. ‘The person as a concept and as an experience is born and bred of Patristic Theology. Without it, this profound content cannot be understood or justified,’ notes Metropolitan Ioannis of Pergamon (‘From Person to Person,’ Offerings in Honor of Metropolitan Geron Meliton of Chalcedon, Thessaloniki 1977, p. 287). Person-centered culture is the resistance to the objectification of man, either in the name of the advancement of science and technology, or for the sake of economic development, nationalism, various dogmatisms and fundamentalisms, individualism, or religious or secular collectivism. The civilization of the person is a denial and cancellation the logic of the ‘non-civilization’ of Having, which is characterized by the ‘having to have more’ and being ‘unsatisfied.’ ‘Hades did not say; That is enough, nor did the covetous ever say; That is enough’ (Vespers 57, 72, 3-4). The holy Chrysostom had described the words ‘mine and yours’ as ‘cold words ...introducing myriad wars into the world.’ Nothing, according to Chrysostom, enslaves a human being more than the ‘many necessities’ (On the Psalms, PG 55, 279). And today, great thinkers warn that if global society remains prosperous and does not turn to truth and freedom, it will be impossible for it to survive.

“A person-centered ethic in the field of education is the education of freedom and responsibility, the ‘ethos of the teacher’ and the ‘asceticism of the disciple.’ The teacher here is more than just a ‘trainer,’ the student is more than a ‘trainee,’ the school is not only a place for the transmission of useful knowledge and information, but operates also in the field of values, cultivating a spirit of giving and social responsibility. Everything in this context bears the stamp of personal equity, existential commitment and self-offering. The purpose of education in the so-called ‘school of the person’ is, as the philosopher and educator Vassilios Tatakis wrote, to liberate young people from constant preoccupation with what they feel, with their feelings, their desires and their satisfactions, with their ‘superficial, psychological ego,’ and shifting their interest ‘from the surface to the depth of their being,’ towards the development of their ‘spiritual nature.’ (The Course of Man, Athens 1984, pp. 59-60)”

His All-Holiness was addressed by the Archon Primikirios of the Holy Great Church of Christ, Athanasios Angelidis, President of the Board of the Great Patriarchal School of the Nation.

Earlier, the Ecumenical Patriarch celebrated the Divine Liturgy that was celebrated at the Patriarchal Church of Saint George, concelebrated by the Metropolitans Apostolos, Geron of Derkon,  Irenaios of Myriophytos and Peristasis, Chrysostomos of Myra, Stephanos of Kallioupolis and Madytos, Athenagoras of Kydonia and Maximos of Selyvria.

The sermon of the day was delivered by Archimandrite Timotheos Railakis Vranas, priest of the Community of Vafeochori.

Present were Ecclesiastical Hierarchs of the Throne, Archons Offikion of the Holy Great Church of Christ, the Consul General of Greece in Istanbul, Georgia Sultanopoulou, the Board, the Principal, teachers and students of the Great Patriarchal School of the Nation, teachers and students from other schools of the Omogeneia, and faithful from Istanbul and abroad.

At the end of the Divine Liturgy, the Ecumenical Patriarch offered, as he does every year, the Trisagion for the repose of the souls of the departed founders, benefactors, administrators, principals, professors, teachers, curators and students of the Great School of the Nation.

In the presentation of the book about Markos Pitsipios

On the eve of the feast, the Ecumenical Patriarch, after Great Vespers which he celebrated, attended the presentation of the biographical book “Marko Pasha (Pitsipios) 1824-1888,” by Ms. Despina Papadopoulos Anats, which was held at the Sismanoglio Mansion of the Consulate General of Greece in Istanbul.

The book was presented by Amb. Alexis Alexandris, Emeritus Professor of NTUA and President of O.OM.CO., Nikolaos Ouzounoglou, the journalist Manolis Kostidis, and Marko Pasha’s great-grandson, Mr. George Papadopoulos, Mechanical Engineer. The event was welcomed by the Consul General of Greece in Istanbul, Georgia Sultanopoulou, and coordinated by Andreas Robopoulos, journalist and publisher of the Hellenic Echo newspaper.

It is recalled that Markos Pitsipios was a Medical Surgeon, Rector of the Imperial Military Medical School of Galatasaray, as well as founder and first president of the Red Crescent in the Ottoman Empire. He was one of the leading figures of his time and one of the most prominent children of the Greeks (Romiosynis), and made a significant contribution to the social, educational and cultural life of the Ottoman Empire.