Ecumenical Patriarch: Faced with any questioning of the rights and privileges of the Ecumenical Throne, we will invoke the hallowed practice, order and tradition of Orthodoxy

Print Ecumenical Patriarch: Faced with any questioning of the rights and privileges of the Ecumenical Throne, we will invoke the hallowed practice, order and tradition of Orthodoxy
Mail 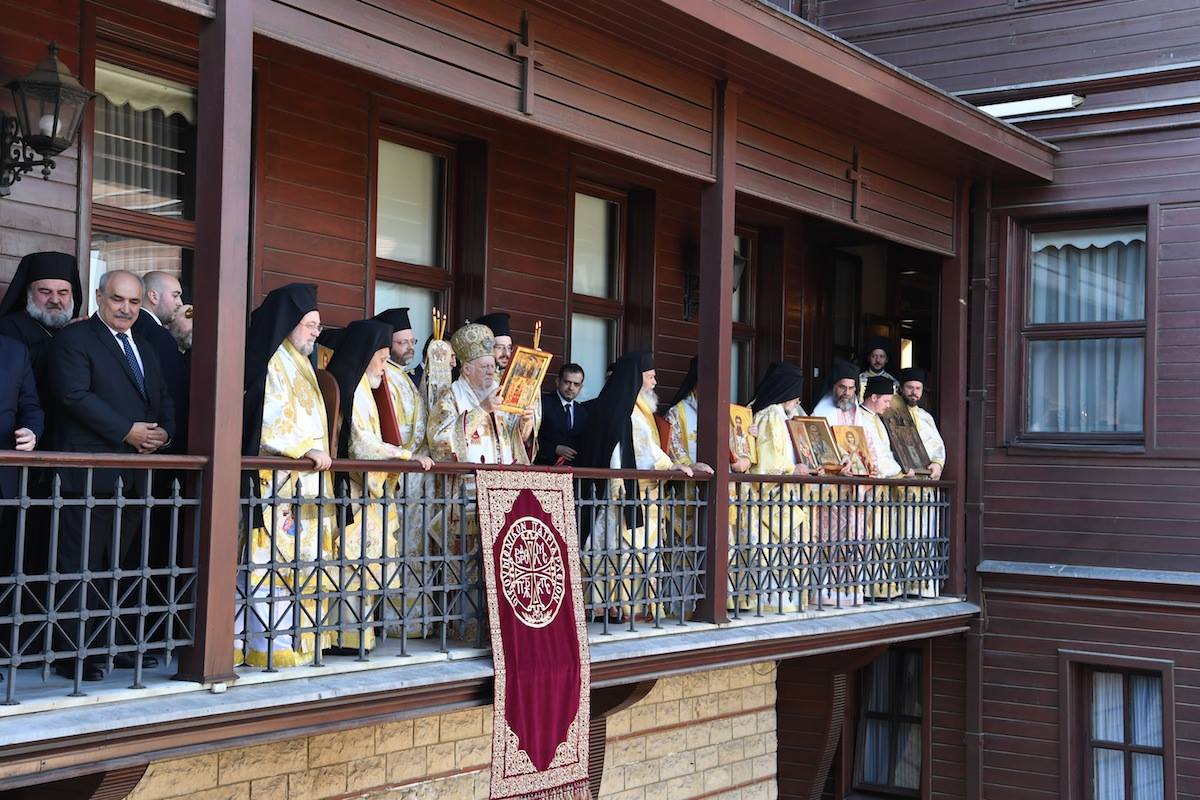 His All-Holiness blesses the faithful from the balcony of the Phanar during celebrations commemorating the Sunday of Orthodoxy.
© N. Manginas

A glorious celebration of the Sunday of Orthodoxy at the Ecumenical Patriarchate, commemorating the end of the iconoclasm and the definitive restoration of the Holy Icons in 843 AD

Ordination of a new cleric

With all solemnity and in accord with centuries-old tradition, today, March 17, the Sunday of Orthodoxy was celebrated in the Holy Cathedral of the First-Throned Church of Constantinople.

Ecumenical Patriarch Bartholomew celebrated the Divine Liturgy, assisted by Metropolitans Dimitrios of The Princes’ Islands, Augoustinos of Germany, Germanos of Tranoupolis, Sotirios of Toronto, Makarios of Aneon, Eugenios of Rethymno and Avlopotamos, Amphilochios of Ganos and Chora, Damaskinos of Kydonia and Apokoronos, Nathanael of Kos and Nisyros, Konstantinos of Singapore and Chrysostomos of Symi. During the Divine Liturgy, His All-Holiness ordained the subdeacon Dimitrios Nikiforos, a legal scholar and theologian, to the diaconate, giving him the name Aetios.

In his exhortation before the ordination of the new cleric, the Ecumenical Patriarch emphasized the honor and the great responsibility with which joining the Sacred Clergy of the Mother Church is connected, and the importance of his specialization in Canon Law for his ministry.

“This means that you will always be in your ecclesiastical career a supporter of the rights and privileges of the all-holy Ecumenical Throne, which  is very timely today, when they are falsely challenged by purely secular criteria. Against this we invoke the hallowed practice and order and tradition of Orthodoxy, which is an immovable rock upon which the waves of ambition and expedience are broken, in order to damage the sacred and inviolable primacy of the Church of Constantinople’s leadership in love and service. You will have as a template and example for the defense of this Throne the Archdeacon Aetios of Constantinople, with whose name you will be honored today.”

In his remarks, the new cleric assured His All-Holiness of his complete dedication to the Mother Church.

“As the bearer and official of the holy tradition of the ‘ruling and suffering’ Great Church that I am called upon to become, today I join in the Patriarchal Court. Master, Your All-Holiness, in the twenty-seven years of your eucharistic Patriarchate, you have had the blessing of creating many young clerics. Everyone is your spiritual child and you are the Father of all. As a spiritual child of Your All-Holiness, I rely upon you, strong in your paternal love, and I assure you that the main purpose of my life will be the unconditional and dedicated service to Your All-Holiness and the victorious and triumphant struggle for the rights of the Ecumenical Throne, following faithfully the example of the Archdeacon Aetios. Amen. Let it be so!”

Theodoritos, the Metropolitan of Laodicea, gave the closing sermon of the day:

“The good and divine Orthodox Fathers, on the first Sunday of the Great Fast, celebrated the Triumph of Orthodoxy, the commemoration of the Restoration of the holy and sacred icons in the year 843 by the eminent emperors of Constantinople Michael and his mother Theodora, during the Ecumenical Patriarchate of the holy confessor Methodios of Constantinople. We honor today the great confessors of faith, the shepherds of the Church, the hierarchs, the priests and the deacons, along with the monks and laymen, who defended the word of truth, sacrificing, oftentimes, even their lives.

“The defense of the Orthodox Faith follows closely upon the martyrdom of the Church, which historically devoted much of its time and dynamism to preserving the very authenticity and truth of faith.

“St. John of Damascus was the great defender and champion of Orthodoxy at the time of the iconoclastic controversy. Through his renowned works ‘On the Divine Images’ and  ‘An Exact Exposition of the Orthodox Faith,’ which are a synopsis of the theology and experience of the Ecumenical Synods and mark the end of a long period of the formation of the Christian doctrine of the Church, he has greatly contributed, on the one hand, to the preservation of the true faith concerning the divine and human natures of the Lord and, on the other hand, to the passage of this unaltered tradition to subsequent generations of the faithful.”

The Metropolitan of Laodicea, at another point in his sermon, pointed out the role and contribution through the ages of the Mother Church of Constantinople.

“In this city, the Queen of Cities, as another example, the final decision was made to restore the holy icons. The Great Church of Christ made heroic efforts to formulate Christian doctrine and exercised its ‘primacy of honor’ as a primacy of responsibility and service for unity, preserving the good faith and canonical order of the Church.

“The Ecumenical Patriarchate, as the first throne of Orthodoxy, exercised its ecclesiastical authority in the context of canonical and synodical tradition and self-perception.

“The persecuted Mother Church, equipped with holiness, has for centuries been faithful and loyal to the fullness of the Church, taking the lead in works of sacrificial love and missionary action. She continues to serve with responsibility and self-awareness the needs of the local Orthodox Churches, communicating with the entire Christian world and bearing authentic witness to the Orthodox faith and life.

“The experience of recent times with the judicial claims has demonstrated the important role of the Ecumenical Patriarchate in promoting the advancement of inter-Orthodox and inter-Christian relations.

“The convening and the functioning of the Pan-Orthodox and pre-synodical conferences, and in particular the Holy and Great Synod in Crete three years ago, highlighted the responsible ministry of the Great Church of Christ.

“The coordinating powers of the Ecumenical Patriarchate ensure the harmonious relations of the local Orthodox Churches within the bounds of Orthodox tradition and spirituality.

The Ecumenical Throne has always practiced and exercised the primacy of honor and service with prudence and responsibility, as the unceasing guard and angel of good, having as a criterion the long-standing Orthodox self-perception and the tradition and order of the Fathers of the Church.

“However, at this sacred moment, I cannot but refer to the sacrificial ministry of the Ecumenical Patriarch Bartholomew, who, with his dynamic personality and extensive theological and canonical training, upholds, by the grace of God, the divine mission of the Ecumenical Patriarchate, and at the same time remains the nexus of the brotherhood of the Orthodox Churches.

“As a consequence of this, with a sense of deep responsibility and apostolic courage, the energetic and visionary Patriarch has recently granted the Tomos of Autocephaly to the Church of Ukraine, in order to provide the proven and most appropriate solution to the chronic ecclesiastical problem of that country.”

The ecclesiastics Metropolitans Konstantinos, Geron of Nikaia; Chrysostomos of Myra; Theoloptos of Ikonion; Elpidophoros of Boursa; Archbishop Anthimonos Nektarios, Commissioner of the Holy Sepulcher in the city; Archbishop Job of Telmessos and Bishop Makarios of Christoupolis were present. Also present were the Deputy Foreign Minister Markos Bolaris, as the representative of the Greek Government; the Ambassador of Greece to Ankara, Petros Mavroidis; the General Consuls of Greece and Ukraine in the City, Mrs. Tzortzina Sultanopoulou and Mr. Oleksandr Gaman; the official Archons of the Ecumenical Throne; the parents and the family of the new clergyman; teachers and students from the Greek schools in the city; and a multitude of pilgrims.

After the dismissal, the Ecumenical Patriarch, with the hierarchs who had celebrated with him, prayed the traditional Trisagion for the repose of the souls of all “those who honored and suffered for our Orthodox faith.”

The liturgical procession of the Sacred Images followed, during which the Ecumenical Patriarch blessed the faithful from the balcony of the Patriarchal House.