Ecumenical Patriarch: "Never in its history has the Ecumenical Throne…remained idle when the Orthodox people appealed to it”

Print Ecumenical Patriarch: "Never in its history has the Ecumenical Throne…remained idle when the Orthodox people appealed to it”
Mail 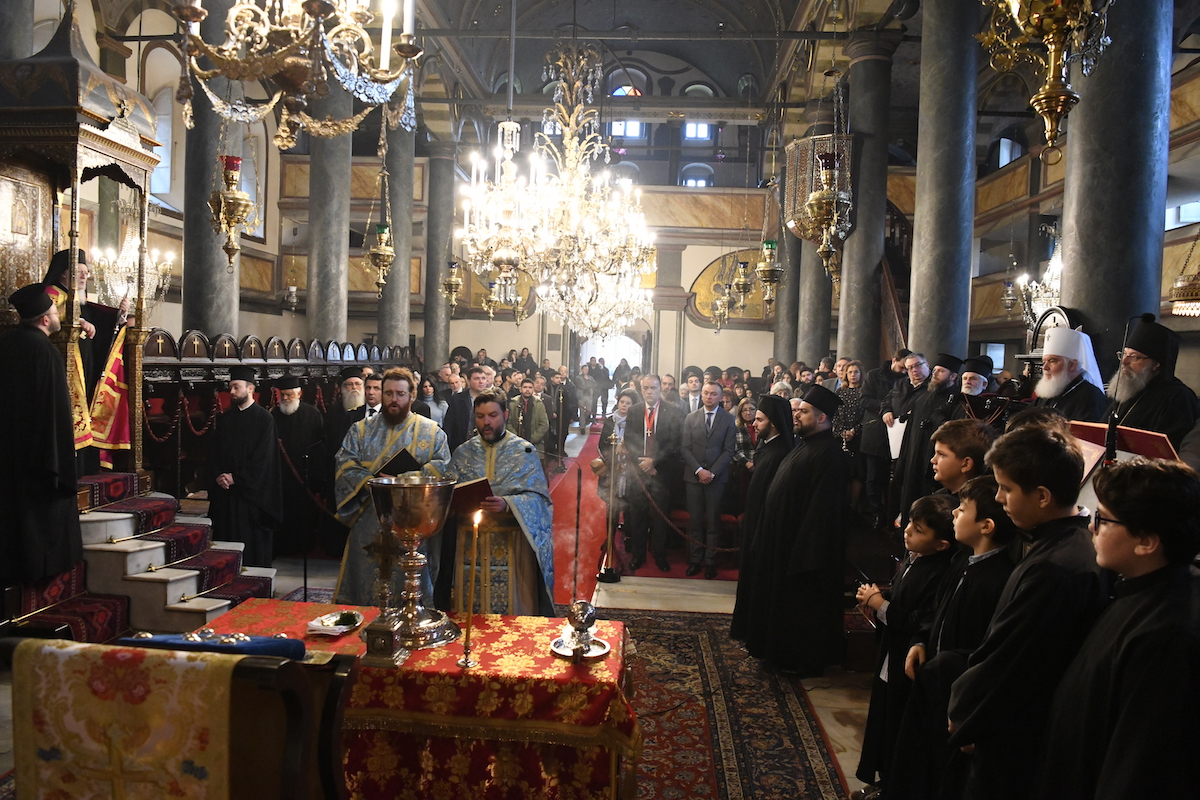 “The invitation to ‘keep our unity in Eucharistic communion’ from His Beatitude the Patriarch of Jerusalem is essentially to His Beatitude the Patriarch of Moscow and not to the entire ecclesiastical body of Orthodoxy,” Ecumenical Patriarch Bartholomew pointed out in his address after the Divine Liturgy, at which he presided in Chorostasia today, January 5, the Sunday Before the Festival of Lights, at the Patriarchal Church. A delegation of the Ukrainian Orthodox Church led by Metropolitan Makarios of Lviv attended, on the occasion of the one-year mark since the signing and granting of the Tomos of Autocephaly of the Church of Ukraine. His All-Holiness noted that the “canonically untenable and ecclesiologically weak” initiative of the Patriarch Theophilos of Jerusalem made an unfortunate impression, “upon us, and not only upon us,” and recalled, among other things, that “the Church of Russia” is the one that “ended the commemoration of the first three who are in communion with the Most Holy Church of Ukraine.”

The General Secretary of the Holy and Great Synod, Archimandrite Ioakim, with the undersecretary, Deacon Gregorios, celebrated the Divine Liturgy and the blessing of the water on the eve of Theophany.

Present were the Metropolitan Chrysostomos of Myra, priests from the Church of Cyprus, Archons Offikion of the Holy Great Church of Christ, the Consul General of Ukraine in Istanbul, Oleksandr Gaman, and faithful from Istanbul, as well as from Greece, Cyprus and other countries.

The address of His All-Holiness

“We are delighted and happy to welcome you to the all-holy Center of Orthodoxy to celebrate the first anniversary of our signature under the auspices of our Holy and Sacred Synod and the official granting of the Tomos of Autocephaly to the Most Holy Church of Ukraine,” said the Ecumenical Patriarch in his address, expressing his satisfaction with the progress so far, but also with his optimism for the future, of the new Ukrainian Church.

“We were aware of your struggles and we heard and lived through the defamation and slander of your inner ecclesiastical life and your relationship with the Mother Church of Constantinople, whom they see not as an affectionate mother who cured longstanding dysfunction and disruptions by granting her daughter internal administrative autonomy, but as a reckless and authoritarian matriarch, who intervened to manipulate and control her. However, as you emphasized, dear brethren, the Church of Ukraine is fully free, while those who do not recognize it in Ukraine are obviously being manipulated from the outside, to the detriment of the spiritual interests of the pious Ukrainian people.”

His All-Holiness referred to the timeless care and ministry of the Ecumenical Throne for the unity of Orthodoxy, without failing to mention the accusations, defamation and slander expressed against the Mother Church of Constantinople, and also against the Most Holy Church of Ukraine.

“Never in its history has the Ecumenical Throne, which has by its sacred canons and established and ordained practice the responsibility for the unity and stability of Orthodoxy, remained idle when the Orthodox people seek from it a solution to longstanding ecclesiastical problems and look to it for support. In all the cases of the granting of Autocephaly by the Mother Church, the sole criterion for the decision of the Holy and Sacred Synod was the unquestionable pastoral care for the people of God, always with reference to the preservation of the canonical order and synodical identity of the Church. The Ecumenical Patriarchate always intends to build up the Body of Christ, and not on the display of worldly power and might.

“No action of the Ecumenical Throne has undermined the divine and human character of the Church, in contrast to those who criticize the decisions of the Holy Great Church of Christ, who are those who are turning the Church into a secular institution, approaching ecclesiastical issues with extraneous criteria, devoid of Orthodox thought and sound ecclesiology. We consider it completely unacceptable that such mischief-makers accuse the Ecumenical Patriarchate of exercising secular power and being manipulated by the centers of worldly power, even spreading myths about the bribing of the Mother Church and this Ecumenical Patriarch, judging affairs of themselves.

“The Holy Great Church of Christ, lifting, in the words of the great Archon Rhetor Christos Giannaras, ‘the cross of the preconceptions and threats of the lofty and supercilious and numerically powerful,’ is today vilified primarily by its ‘round table’ of the ‘offspring of the first-throned ecclesiastical fathers,’ who ‘descend into the pursuit of the religious fervor of nationalism.’”

Afterwards, he again extended the congratulations of the Ecumenical Patriarchate to the Pope and Patriarch Theodore of Alexandria and All Africa and to Archbishop Ieronymos of Athens and All Greece for their alignment with the decision of the Holy Great Church of Christ and their including in the diptychs the Metropolitan Epiphaniy of Kyiv and All Ukraine.

“Their action actually supports the unity of Orthodoxy and reveals the vital and uninterrupted functioning of the canonical conscience in the Church.

“In contrast, a particularly unfortunate impression was made upon us, and not just us, by the canonically untenable and ecclesiologically weak initiative of His Beatitude Patriarch Theophilos of Jerusalem to invite Orthodox Primates to a meeting in Amman, Jordan in order to 'preserve our unity in Eucharistic communion,' as he writes English in the relevant invitation. Everyone knows that for many years the Patriarchate of Antioch has not been in Eucharistic communion with the Patriarchate of Jerusalem, due to a dispute about jurisdiction over Qatar. It is also well known that the Church of Russia ended the commemoration of the first three who are in communion with the Most Holy Church of Ukraine. Therefore, on the basis of common sense alone, the invitation to ‘preserve our unity in Eucharistic communion’ on behalf of His Beatitude the Patriarch of Jerusalem is essentially to His Beatitude the Patriarch of Moscow and not to the entire ecclesiastical body of Orthodoxy.”

His All-Holiness expressed his gratitude to Metropolitan of Lviv, “for your attitude throughout the progress of the Church of Ukraine towards Autocephaly, and for your positive contribution in the face of difficulties and varied attacks, in the spirit of love in Christ and in your capacity as an Orthodox bishop, ‘to the common interest of the Church in the protection of the redeemed,’ according to Saint John Chrysostom,” and asked him to convey “heartfelt congratulations from us personally and our entire Hierarchy to our brother, His Beatitude Metropolitan Epiphaniy of Kyiv and All Ukraine on the joyful occasion of the completion of one year of Autocephaly.”

The address of the Metropolitan of Lviv

“For many centuries we have been waiting for the date of January 5, 2019! God was slow to respond to our prayers, our tears, our pleas, our pains, our testimonies, but he responded in the best way! History was waiting, after 1686, for the great Ecumenical Patriarch Bartholomew, a wise Patriarch, to hear all that our soul was saying, and to stoop to deal with our problems, and to give us the blessed solution of Autocephaly.” In his address, the Metropolitan Makarios of Lviv pointed out and warmly referred to the personality and work of the Primate of the Ukrainian Orthodox Church, the Metropolitan Epiphaniy of Kyiv and All Ukraine, who, he assured, loves and supports his difficult work.

“We had a very difficult year in 2019! We have heard many lies about our Church! We heard that Constantinople was controlling us when she gave us the Tomos of Autocephaly! Instead, those who are presented as free and independent receive orders from outside. They accused us of invalid ordinations, of self-ordinations, of many terrible things! But we respond to lies and slander with the power of Truth and Love! The documents of my ordination have been at the Ecumenical Patriarchate for a long time. His Beatitude Metropolitan Vladimir of Kyiv accepted us as Hierarchs, and never said we had to be ordained again. He gave us engolpia. He didn’t know?

“Only today do they know? They never talked about re-ordinations! All they asked for was that we leave Constantinople! Let us not have a relationship with you! But what child has nothing to do with his mother?

“And if we were once in schism, it was because we did not tolerate the blessed Ukrainian people becoming a plaything in the hands of other forces. We wanted our Church to be governed by the traditions of our Mother Church. With what we got from the Baptism of St. Vladimir.

"We wanted our Church to have the fragrance of Christ rather than rely on gold. We wanted our Ukrainian language. Our tradition. That is why they led us to the schism, from which you redeemed and freed us. ”

Metropolitan Makarios expressed the gratitude of the Most Holy Church of Ukraine to the Ecumenical Patriarchate for its decision to grant her the status of Autocephaly.

“Thank you with all our might! And we tell you that while we are breathing, we will talk about how much good the Mother Church of Constantinople has done for us. This is what we will teach our children. To the children of our children. For generations to come. In our future. Always in the history of Ukraine, two dates will remain in holy letters: one is the Baptism of Vladimir and the other is our Tomos of Autocephaly. You did this good for us. You are giving us your hand and we are going from darkness to the light of our true freedom!”

Subsequently, Bishop Vasilkiv Levrentios read the Message of Metropolitan Epiphaniy of Kyiv and All Ukraine, the Greek translation of which was read by the Kodikographos of the Holy and Sacred Synod of the Ecumenical Patriarchate, Deacon Vosporios.

Then, at the exhortation of His All-Holiness, Metropolitan Makarios blessed the faithful with holy water, while Bishop Levrentios distributed the antidoron.

On Saturday, January 4, His All-Holiness received the delegation of the Church of Ukraine in a private audience at the Patriarchal Office. The delegation, aside from the two Hierarchs, included the Protopresbyters Valerios Semantsos and Vasilios Lilo, the Mayor of Tarasivka, Vladimir Sison, and Deputy Mayor of Lviv, Eugenios Boouko.