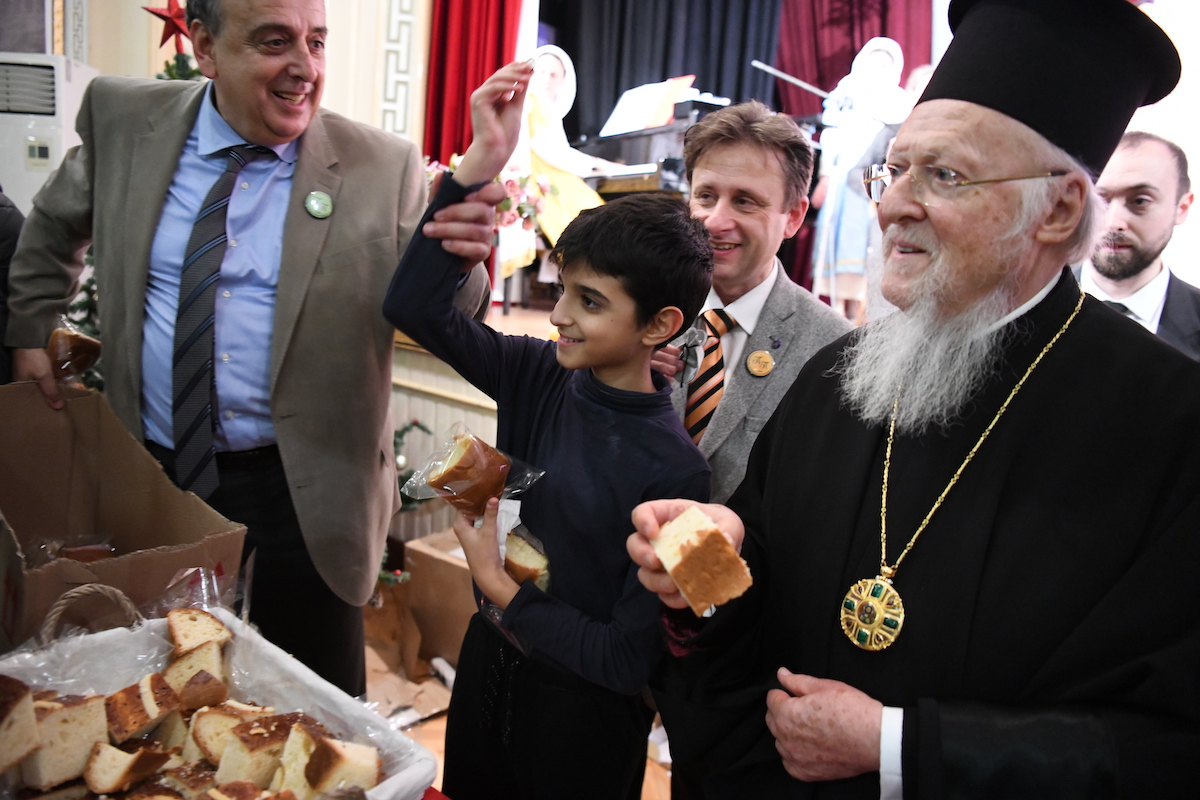 At a festive event dedicated to youth in Istanbul

The Ecumenical Patriarch Bartholomew gave paternal advice to the children of the Diaspora (Omogeneia), the future of the Greeks, as well as to their parents, at a festive event for the youth of Istanbul, held on the afternoon of Friday, January 3, Zografeion Secondary School and Lyceum, during which he blessed the Vasilopita of the Paidopolis Protis youth camp.

His All-Holiness pointed out the profound impact that technological development has on society and drew the attention of parents, as well as of children and young people, to the potential dangers of using new technologies.

“The participation of our children in this festive gathering gives us the impetus to refer to some of the contemporary trends and developments that pose risks to childhood. Radical changes in the identity of the child were brought about by the catalytic presence of television, the Internet and computers in the lives of societies and have influenced the child’s spirit, the child’s world, education and daily life. Experts talk about the ‘disappearance’ of childhood and childhood ‘innocence.’ The conversion of children into early consumers is also dangerous for them. The term ‘childhood’ is today, as it is said, an ‘economic category.’ The crisis of marriage and the family, the rapid change in social conditions and the educational environment, the uncontrolled participation of children in the adult world cause further distortions of childhood identity. Certainly if we consider child rights violations worldwide, children -- innocent victims of war conflict, children -- refugees, the widespread exploitation of them by the clever, hunger and deprivation, which primarily affect children, then we understand why it is said that modern culture does not provide the right environment for the development and protection of childhood.”

He then emphasized that the Holy Great Church of Christ, in the face of all these challenges, treats children with special affection, recalling Christ’s love and fervent interest in them.

“The new social and cultural facts of our time make the education and training of the new generation more difficult and complex, but they also highlight its importance as a contribution to human education, as ‘humanism.’ The Orthodox Church today is concerned about the domination of a ‘secular, individual-centered educational system’ that is affecting children and young people. Television and the Internet function as a source of values, as a ‘parallel school,’ as an educational agent that transmits values and shapes attitudes of life that are often incompatible with the principles of the school, the family, and the Church, or even those opposed to them. Orthodox parents must nurture and educate the children of the ‘Lord in education and discipline’ (Eph. 4:4) and impart to them the eternal values of our faith. The Church, through its catechetical work, aims at the ‘conscious and active participation’ of young people in liturgical and spiritual life, cultivating in them respect for the traditions of the Nation, love for neighbor and solidarity, that what children and young people will love in this phase of their lives, in which human beings are flexible and capable of education, will remain indelible in their souls throughout their lives.”

Addressing the children and the young people in particular, the Ecumenical Patriarch urged them:

“We, personally, are taking the opportunity of our present gathering to give fatherly advice to the new generation regarding its relationship with new technology. Because your computer, smartphone and the Internet are a technological miracle and fascinate you, you have to make the right use of them as great media. This is what is demanded, it also highlights the value of technological advancement to human freedom and responsibility.”

Concluding his address, he expressed the hope that the New Year would be healthy, joyful, peaceful and fruitful for all those present and their families.

“May the God of love bless our youth, children and adolescents, the entire promising new generation of Romans, to walk in His path, to attend to their lessons and studies, and not to neglect to maintain and defend the long and invaluable Tradition of Orthodoxy and the vital values ​​of the Nation. Dear children, young and old, have faith in the providence of God and trust in your own abilities, which Divine Grace will always strengthened and inspire.”

In his address, His All-Holiness cited warmly the Metropolitan Barnabas of Neapolis and Stavroupolis for the support he provides to Paidopolis Protis, and welcomed the presence of the youth of the Ecumenical Federation of Constantinople and members of the choir of “Saint Kassiani the Hymnographer” of the Holy Metropolis of Neapolis and Stavroupolis, who sang Christmas songs and traditional carols under the direction of Mrs. Maria Charalabidou.

“Paidopolis Protis cannot be understood without the presence and great contribution and support of the officials of the Holy Metropolis of Neapolis and Stavroupolis. There is no greater offering and nobler action than giving joy, learning and protection to children. We cordially welcome the young people of the Ecumenical Federation of Constantinople, their willing volunteers, who share with us the joy and blessing of the Holy Twelve. We would like to thank and congratulate the two key contributors to this event, the Director of the Zografeion, Mr. Ioannis Demirtzoglou and the Director of the Paidopolis, Mr. Adamantios Komvopoulos. ”

Earlier greetings were given by the Archon Referendarios Mr. Ioannis Demirtzoglou and by the the Professor and Director of Paidopolis Protis, Mr. Adamantios Komvopoulos, as well as by Ms. Alexandra Morosidou, as the representative of the youth of the Ecumenical Federation of Constantinople.

Mr. Adamantios Komvopoulos thanked all those who support the work of Paidopolis and in particular the Metropolitan Barnabas of Neapolis and Stavroupolis, to whom he offered commemorative gifts, through the associate of the holy Metropolis, Ms. Maria Charalabou, from the hands of His All-Holiness.

The coin of the Vasilopita was discovered by the young student Dimitrios Kelepouri.

The celebration was attended by Hierarchs, Archons Offikion, key figures and members of the Omogeneia.

On Friday morning, the Ecumenical Patriarch granted an audience to the Metropolitan Ioustinos of Nea Krini and Kalamaria, who was accompanied by the Protosynkellos of the Holy Monastery of Nea Ionia and Philadelphia, Archimandrite Epiphanios Arvanitis, and the Hieromonk Chrysostomos, Geron of the Holy Cell of Saint John Chrysostom in the Skete of Koutloumousiou.