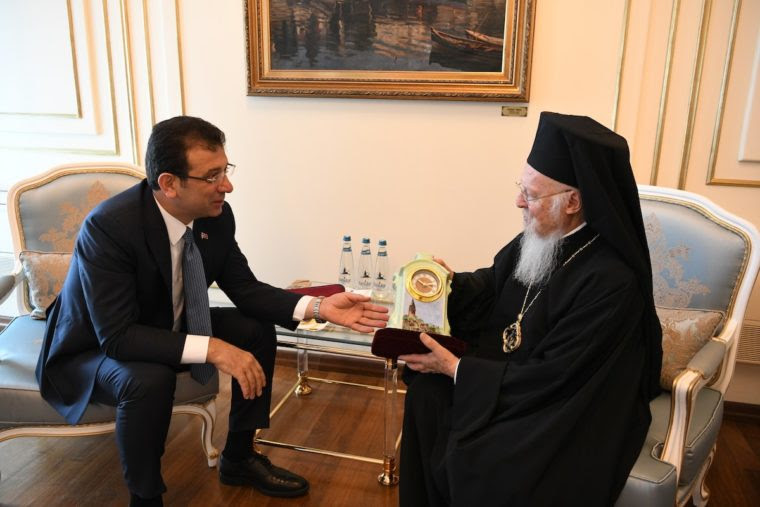 Ecumenical Patriarch Bartholomew met with the new Mayor of the Metropolitan City Council, Ekrem Imamoglu, in the Mayoral Hall on Thursday, 4 July, and congratulated him on his recent election.

His All-Holiness wished that Mayor Imamoglu, on behalf of the Ecumenical Patriarchate and his homeland, would be successful in his multifaceted work and would contribute during his term of office to improving the quality of life in the developing urban fabric of the Metropolitan Municipality, with the implementation of more environmental and social policies, to the benefit of all the inhabitants of the city.

During their heartfelt discussion, Ecumenical Patriarch Bartholomew referred in particular to the importance and magnitude of the institution of the Ecumenical Patriarchate, which has always been based in this historic city, and also to the initiatives of the Ecumenical Throne to sensitize every human being of good will to the need for protection of the natural environment, as well as to promote interfaith and intercultural dialogue with a view toward mutual understanding, respect for diversity, and the peaceful coexistence of human beings of different origins and religious beliefs.

After the meeting, the Ecumenical Patriarch said, among other things, that with his visit, he wanted to congratulate the new mayor for his election. It was particularly important that the Ecumenical Patriarchate, which is the Center for Orthodoxy, is in the multicultural and multi-religious city, and he pointed out that this is not only a religious foundation, but an institution that has made a significant cultural contribution over time. He expressed the certainty that the new mayor, who is a man of good intentions, will work for all citizens without discrimination.

“I convey the prayers of the Patriarchate and the Homeland for success in your work,” His All-Holiness said.

For his part, Mayor Imamoglu expressed his joy at the visit of the Patriarch and stressed that he would attach great importance to the cultural dimension of the city, and that he would soon take initiatives to implement this commitment. He underlined the fact that the Ecumenical Patriarchate, a leading institution in the world, is based in the city, and announced that he intends to create a body that will deal with and cooperate with all the religions of the city.

It should be recalled that in recent months, Mr. Imamoglu, accompanied by his colleagues, twice visited the Ecumenical Patriarchate, where he was received by His All-Holiness.