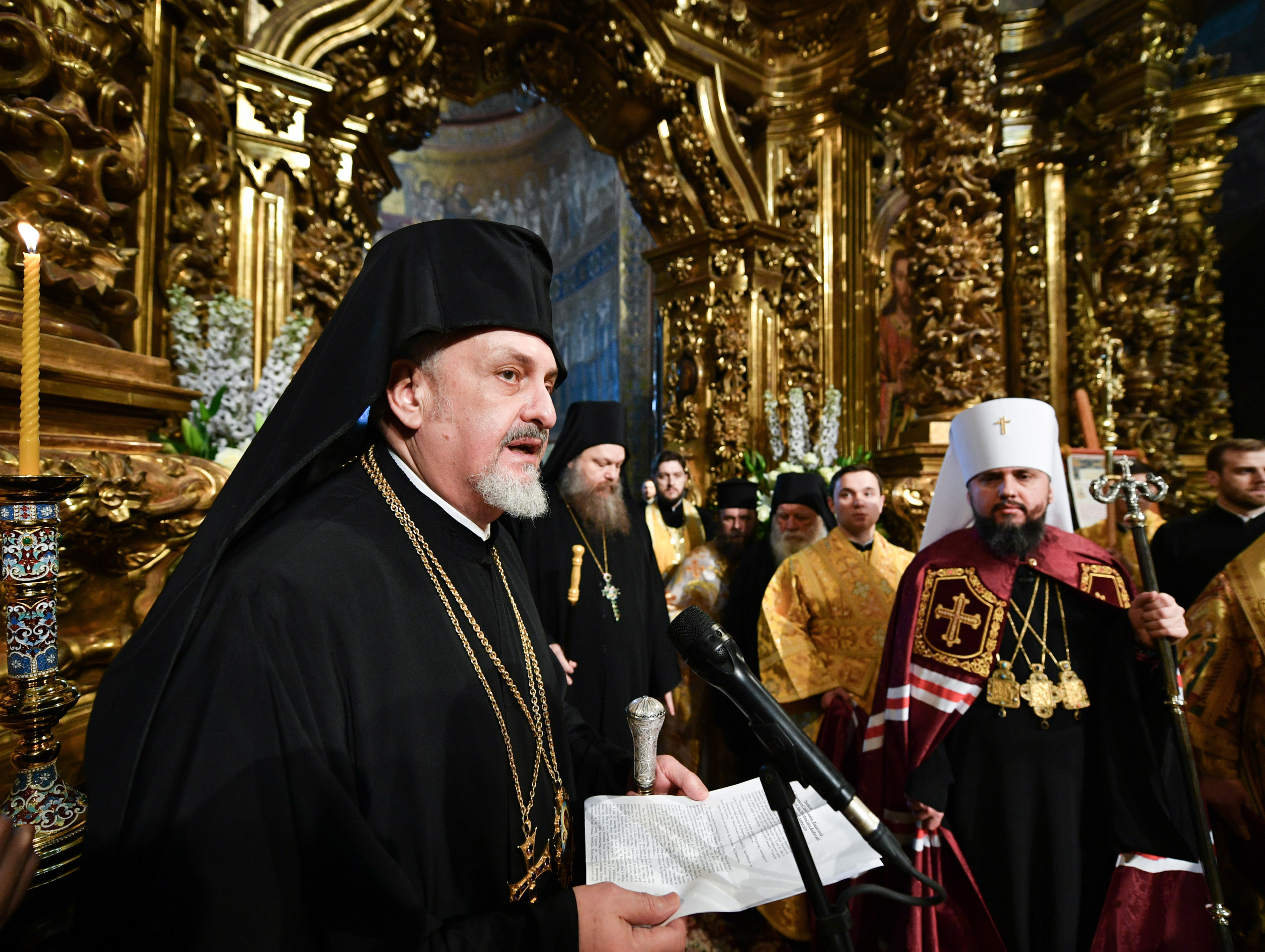 On behalf of His All-Holiness, Metropolitan Emmanuel of France delivers words to Metropolitan Epiphanios on the occasion of his enthronement as Primate of the Church of Ukraine.
© president.gov.ua / Mykola Lazarenko

On Sunday, February 3, 2019, a Delegation from the Ecumenical Patriarchate enthroned His Eminence Metropolitan Epiphanios as the new Primate of the Ukrainian Orthodox Church in the historic Saint Sophia Cathedral in Kiev, on His Eminence's 40th birthday.

Addressing the faithful after the Divine Liturgy at the Church of the Virgin Mary of Belgrade in Istanbul on Friday, February 1, His All-Holiness announced: “We sent a four-member Delegation of our Ecumenical Patriarchate, two hierarchs, Metropolitan Emmanuel of France and Metropolitan Amphilochios of Adrianople, and two Abbots of Mount Athos, Efraim, Abbot of the Vatopaidi Monastery, and Alexios, Abbot of the Xenophontos Monastery. This four-member Delegation will enthrone the new Primate.”

His All-Holiness described his pastoral decision to grant autocephaly to the Ukrainian Orthodox Church as the most important ecclesiastical event that took place at the beginning of this year. He expressed the hope that the new Autocephalous Orthodox Christian Church in Ukraine would grow and unite all believers.

In his remarks Friday, His All-Holiness also announced that on Saturday, the Delegation from the Ecumenical Patriarchate would enthrone the new Exarch whom His All-Holiness appointed. He said: “For Ukraine gave us the historic Church of Saint Andrew in the center of Kiev, and there we appointed Archimandrite Michael, who for seven years labored as the priestly head of our Slavonic Community in Antalya, to be the Stavropygion of the Ecumenical Patriarch. He did a very good job among the Slavs who are settled there, but we needed someone of Ukrainian origin for Ukraine, and appointed him there.

“We hope that this Church will take root and grow, and gather within it the scattered sheep of Christ in Ukraine, unite the disaffected, and always be a source of pride for the Mother Church of Constantinople, in which it should also take pride, as we gave our Ukrainian brethren baptism, the Christian faith and also Christian culture.”