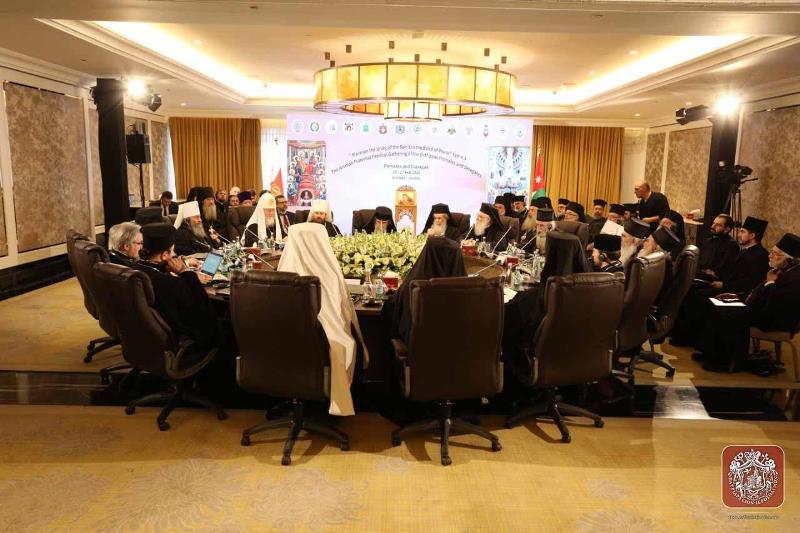 This thoughtful article about the recent fraternal gathering of six local Orthodox churches in Amman sheds light on some of the key challenges and controversies in the Orthodox world today; above all, however, it demonstrates yet again the vital, and indeed indispensable, role that the Ecumenical Patriarchate has played and continues to play in safeguarding the unity of Orthodoxy. The gathering in Jordan proved to be, if nothing else, an object lesson in why the Ecumenical Patriarchate is irreplaceable and essential to the proper functioning of the One, Holy, Catholic and Apostolic Church.

The late February fraternal gathering of six local Orthodox churches in Amman was instructive and at the same time disheartening. Instructive because the gathering exposed truths in global Orthodoxy; disheartening because it was a sad showcasing of Orthodoxy to the world (for the presumably relatively few outsiders who are still paying attention to us).

The first hard truth it highlighted is the lack of deference local churches have towards the Moscow Patriarchate. It exposed Moscow’s lack of spiritual maturity (phronema) to play a pan-Orthodox role that is divorced from its national self-interest.

Despite intense pressure from Moscow, including of course from the Kremlin, only two primates—Patriarch Irinej of Serbia and Archbishop Rastislav of the Czech Lands and Slovakia—joined Patriarchs Theophilos of Jerusalem (the titular chair) and Kirill of Moscow in Jordan’s capital city.[i]

Metropolitan Hilarion of Volokolamsk, chairman of Moscow’s Department for External Church Relations, and his deputies traveled most of the Orthodox world to build support for and increase participation in the fraternal gathering without meaningful success. Even the Ancient Patriarchate of Antioch, who is arguably the most dependent on and favourable towards Moscow, decided against attending.

Already too invested and boasting of the fraternal gathering’s prospects (to say nothing of the fact that it was originally promoted as a synaxis of primates), Moscow, and its foil, Patriarch Theophilos, would not back down from the initiative.

Whereas Moscow through the Jerusalem Patriarchate attempted to isolate Constantinople, and together with it the Ancient Patriarchate of Alexandria and the Church of Greece, they simply appeared to advance parochial self-interest without consideration of the consequences to broader Orthodoxy

As I have detailed elsewhere, most local Orthodox churches are happy to meet with and receive financial favour from Moscow, but are hesitant to align themselves too closely because they know from history that any perceived partnership will immediately cease if Moscow’s interests are threatened.

The second hard truth concerns the Ecumenical Patriarchate and both its unique position and indispensable role within the One, Holy, Catholic, and Apostolic Church. That only the Ecumenical Patriarch has the canonical prerogative to convene and chair a gathering (synaxis) of primates if not understood by some before the Amman meeting, is now recognized by all.

It is telling that even those local churches who have yet to formally recognize the Orthodox Church in Ukraine also decided not to attend. This reinforces the fact that short term disagreements between local churches, regarding Ukraine or any other matter, does not negate the acknowledgement of the prerogatives bestowed to the Ecumenical Patriarchate by the Councils and Fathers of the Church.

It is worth emphasizing here that it is the current Ecumenical Patriarch, His All-Holiness Bartholomew, who instituted formal gathering of primates (six since being elevated to the First Throne of Orthodoxy in 1991), and who has done more than anyone in contemporary history to cultivate and improve intra-Orthodox unity—not with mere words and flowery pronouncements, but with concrete and tangible actions, most notably the 2016 Holy and Great Council held in Crete.

The noted Serbian theologian Stojan Gosevic (and others, as well), have expressed the view that “If there was no Ecumenical Patriarchate, we should have to create it.” A more accurate, discerning, and applicable characterization in the current intra-Orthodox context cannot be formulated.

Which brings us to our third truth, namely, that the granting of the Tomos of Autocephaly by the Holy and Sacred Synod of the Ecumenical Patriarchate to the OCU is consistent with Orthodox tradition and is supported by church history, canonical norms, and pastoral considerations.

This is an important point because let us not ignore the fact that the fraternal gathering was ostensibly called to discuss the Ukraine question, even though its final press release more so referenced issues of sensitivity to the Church of Serbia (a communications win for Patriarch Irinej and his hard-line lieutenant, Bishop Irinej of Bačka).

Arguably the most telling point that proves the third truth is the direct and indirect intercommunion between all local churches, even Moscow, who has regrettably weaponized the Holy Eucharist for political purposes. This point of intercommunion is an important one and to date overlooked by most commentators.

In the peculiar world of intra-Orthodox relations, how can Patriarchs Theophilos and Irinej concelebrate the Divine Liturgy with Patriarch Kirill one day, and the next do it with the Ecumenical Patriarch and both have canonical and sacramental validity?

If the accepted canonical tradition and norm is one becomes a “schismatic” when one concelebrates with a “schismatic,” why is Moscow not following this practice? The answer is simple: it is the result and unfortunate outcome when one local church torques and leverages canonical norms to suit a politically-motivated agenda.

In a recent interview, Metropolitan Hilarion, attempting to put a positive spin on the outcomes from Amman, described His All-Holiness as “persona non grata.” But for whom? If all local churches recognize the Ecumenical Patriarch and Moscow in turn is in communion with most of them, there is obviously a logical inconsistency.

And what will happen when, not if, other local Orthodox churches formally recognize the OCU. During Sunday of Orthodoxy festivities at the Phanar, for example, Archbishop Chrysostomos of Cyprus concelebrated with His All-Holiness and hierarchs of the Ecumenical Throne. Does Moscow now consider Archbishop Chrysostomos “schismatic” and “persona non grata”? The answer is no, obviously, which only serves to reinforce the point that Moscow’s application of church history, canonical norms, and pastoral considerations are selective, inconsistent, and arguably incoherent.

The fraternal gathering in Amman did more harm than good and was unbecoming the Orthodox Church. It did, however, expose truths in global Orthodoxy regarding the motivations of Moscow, the irreplaceability of the Ecumenical Patriarchate, and the righteous act to welcome all Orthodox faithful in Ukraine into the Church, where the Body and Blood of Christ unites all believers including all primates and hierarchs of the local churches.

[i] Observers from the local churches of Romania and Poland also attended.

Archon Evagelos Sotiropoulos is the Editor of The Ecumenical Patriarchate and Ukraine Autocephaly: Historical, Canonical, and Pastoral Perspectives published by the Order of Saint Andrew the Apostle.