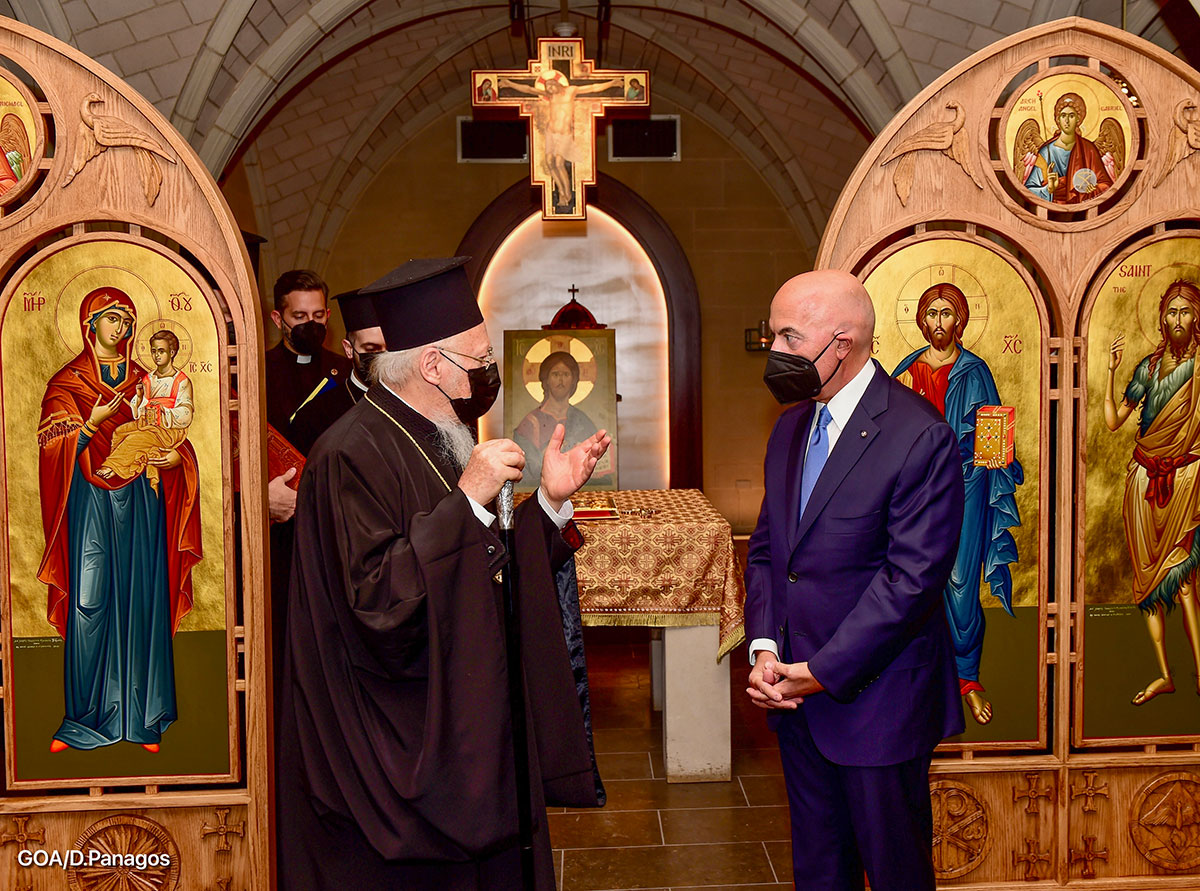 His All-Holiness stated: “This new chair will in the years to come provide ongoing energy to our ecumenical work of reconciliation and mutual understanding. And this is because Georgetown is more than a foundational and exemplary academic institute. Georgetown is a microcosm of the world and how we choose to interpret it.”

In remarks announcing the Endowment, Archon Psaros said: “Today, on this historic visit by His All-Holiness to Georgetown University, my family is honored and humbled to announce the creation of ‘The Ecumenical Patriarch Bartholomew Endowed Orthodox Chaplaincy, Endowed by the Michael Psaros Family.’ The Orthodox Ministry at Georgetown will now last forever.”

“It is fitting,” Archon Psaros added, “that Georgetown University, is now in possession of a true Patriarchal Seat, in the name of Bartholomew. His All-Holiness is the longest serving Ecumenical Patriarch in history, and the greatest in modern history. The creation of this Patriarchal Seat is also in recognition of the recent 30th anniversary of His-All-Holiness’ momentous Enthronement.”

Fr. David Pratt, Georgetown’s Orthodox Christian chaplain, noted that the endowment is “fitting to Georgetown’s long-standing commitment to serving Orthodox students. As the Orthodox Chaplain at the oldest Jesuit, Catholic University, I was honored to witness the Ecumenical Patriarch's symbolic visit to our chapel, and to be part of his advocacy for interreligious dialogue and greater cooperation among people of faith. The endowment also brings fresh attention to the importance of ministering to the spiritual needs of students and their formation as genuine Christian leaders for the future.”

Archon Michael Psaros is a Co-Founder and Co-Managing Partner of KPS Capital Partners, LP. He has served as the Treasurer of the Holy Greek Orthodox Archdiocese of North America and currently serves on its Archdiocesan Council. He is also a founding member of FAITH: An Endowment for Orthodoxy and Hellenism; and serves on the Board of Trustees of The Leadership 100 Advancing Hellenism and Orthodoxy in America, the Executive Board of The Hellenic Initiative, and is a member of AHEPA. Archon Psaros is a member of the National Council of the Order of St. Andrew and the Treasurer of the Ecumenical Patriarch Bartholomew Foundation. Psaros, a graduate of Georgetown University, now serves on the university’s Board of Directors, and is Vice Chairman of the Executive Board of Advisors of Georgetown University’s McDonough School of Business and the Board of Advisors of the Georgetown University Center for Financial Markets and Policy.

Psaros’ gift complements the $250,000 gift he made in 2019 to renovate Copley Crypt, the campus sacred space where Orthodox Christian vespers, liturgies and Catholic Masses are held. This gift included funding for the sacred icons and iconostasis in the crypt.

His All-Holiness Ecumenical Patriarch Bartholomew, spiritual leader of the world’s 300 million Orthodox Christians, has worked steadfastly to advance reconciliation among Christian Churches and the Roman Catholic Church, unity among the Orthodox Church, and dialogue among Christians, Muslims and Jews.