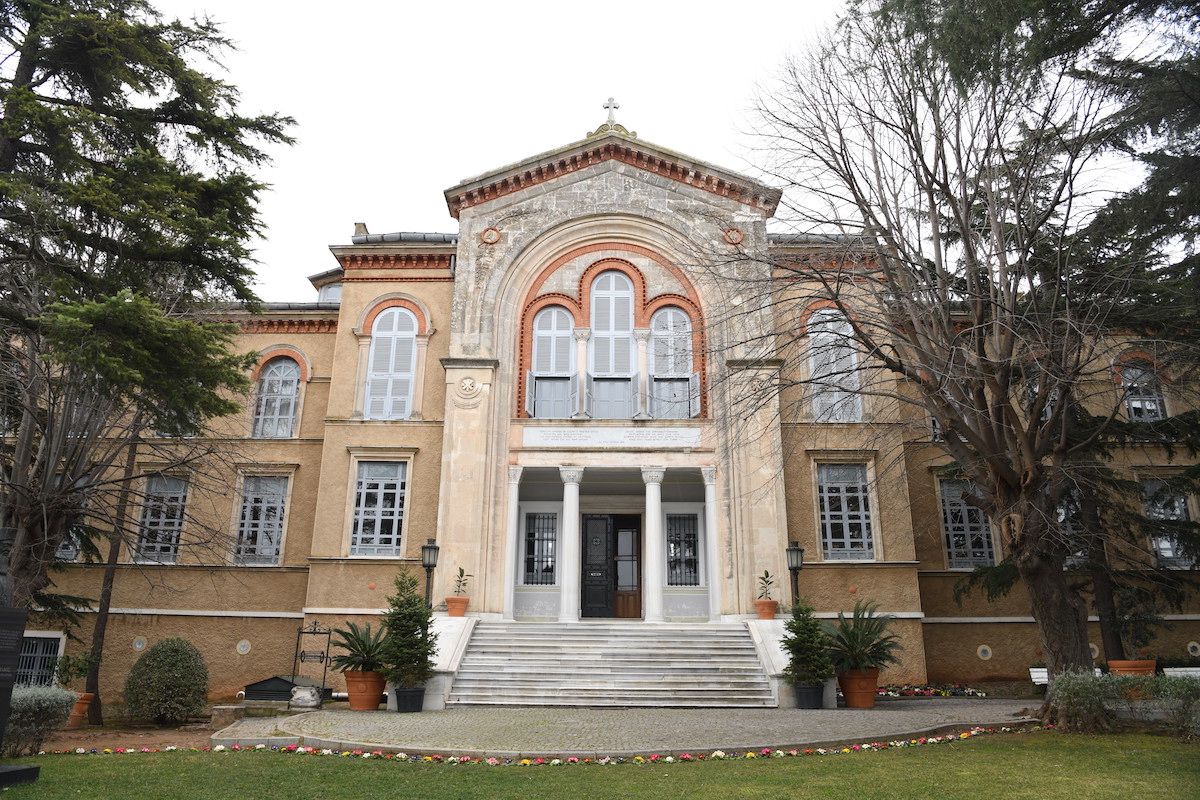 In his address on the occasion of the feast of the Holy Trinity Monastery, where the School is housed

Ecumenical Patriarch Bartholomew expressed the hope and desire that the Sacred Theological School of Halki, unjustly closed for 49 years, would soon be reopened, in order for the Ecumenical Patriarchate to regain its theological arm, he said today, Thursday, February 6, the day on which our Church commemorates Saint Photios, Ecumenical Patriarch of Constantinople and founder of the Holy Trinity Monastery of Halki, where the historic theological school is housed. Earlier, His All-Holiness celebrated the Divine Liturgy, which was held in the catholicon of the monastery, during which assisted the Hierarchs Apostolos, Geron of Derkon, President of the Ephorate of the Monastery, along with its members, Germanos of Tranoupolis, Chrysostomos of Myra and Maximos of Selyvria, Dimitrios, Geron of the Princes’ Islands, Irenaios of Myriophytos and Peristasis, and Makarios of Australia, together with his Auxiliary Bishops Aimilianos of Meloa and Elpidios of Kyanea, clergy and monks, as well as believers from Istanbul, the Princes’ Islands, and abroad.

In his address, the Ecumenical Patriarch mentioned, among other things:

“The Seminary, during its 127 years of operation, graced the Holy Great Church of Christ and Orthodoxy worldwide with over 200,000 graduates. In front of us at this moment are the sweet forms of our Halkites, our teachers and schoolmates, those who went before us and those who were nourished with us, who are strongly devoted to the altar, the ecclesiastical life and the education of children, those who are blessed at the end and at the beginning and the rest of those who have ministered in the Church to this day. We are connected by the common experiences and the theological legacy of Halki, common experiences, common values, common visions. No one in the Seminary taught or passed on to us students anything that was barren, introverted or indifferent to the world and culture. We are preparing here for witness and ministry in this world, without dualism and hesitation, with complete confidence in the providence of God and with a firm belief in the sacredness of our mission. The Monastery and the School were in our lives and in our consciousness in and of themselves, and embodied the same truth of freedom, ‘Christ has set us free’” (Gal. 5:1).

Elsewhere in his speech he pointed out:

“We are marking the 49th year of the unjust imposition of a cessation of operation of our School. Our late immediate predecessor, Ecumenical Patriarch Dimitrios and Our Humility today, have been patiently anxious for the reopening of the Halki School. The efforts are continuing and intensifying. We trust in the all-merciful Lord, and we are sure that the longed-for day will come and the sound of the school bell will come, inviting young budding clerics to their desks and teachers to their seats, in order to continue the blessed tradition of cultivating a theology faithful to Orthodox tradition and open to man and culture.

“Then the Ecumenical Throne will once again acquire its theological arm, powerful and creative. Then the Great Church will be supplied with capable officials, flesh of her flesh, clerics and mystics of theological science, who will lift on their firm shoulders the cross and the multifaceted responsibilities of the Mother Church, expressive of the spirit of Halki and the ethos of the Phanar.”

His All-Holiness recalled that this year marks one hundred years “since the publication of the historic Encyclical of the Church of Constantinople ‘To the Church of Christ,’ (1920), which was prepared by the professors of the Halki Theological School and is considered the axiomatic text of the contemporary Ecumenical Movement,” an anniversary that the Ecumenical Patriarchate will honor in particular.

He then referred to the Trisagion, which he performed after the Divine Liturgy for the repose of the soul of the last Scholarch of the Holy Theological School, the late Metropolitan Maximos of Stavropoleos, whose bones were transferred from Athens, where he was initially buried, to be buried tomorrow, Friday, February 7, at the Valoukli Cemetery, near the other hierarchs of the Throne.

“Our Scholarchs have been the guardians of the School to the end and have gone above, with the sure hope that the robust Seminary will open its gates again and continue its sacred mission. We are convinced that his soul is rejoicing, along with the souls of the other Scholarchs, of the teachers and students of the School, over the decisive fact that, at the level of obtaining the relevant license, the process of the reconstruction and upgrading of the monastery and school building complex is already underway.”

The Ecumenical Patriarch also made a special mention of the works to be undertaken to renovate fundamentally the Theological School of Halki.

“We praise the dear God, for we have thanked in His Church the beloved and appreciated Archon Exarchos of the Ecumenical Throne and the political administrator of Mount Athos, Mr. Athanasius Martinos, who generously undertook the relatively large expense. He is the new Paul Skylitsis Stefanovik, and his name will be engraved for centuries, together with those mentioned above, in the Synodikon of the School. We express our gratitude to Mr. Martinos and his wife, Marina, and the thanks and praise of the Mother Church of Constantinople. May the God of love give to the Great Benefactor of the School and his relatives a blessing from above.

"We are glad, holy Abbot, that the renovation of the buildings here on the Hill of Hope has already begun at the beginning of your term. We wish you fruitful efforts, progressively and expeditiously completing the whole venture, which obviously will greatly enhance the reopening of the Seminary.”.

Concluding his address, His All-Holiness expressed his gratitude to the Ephorate of the Monastery and to its Abbot, the Bishop of Erythres, for the work they are doing, along with their associates, and welcomed all those who mounted the Hill of Hope, in particular the Archbishop of Australia with his entourage, to participate in the celebration at the Holy Trinity Monastery.

Earlier, His All-Holiness spoke warmly of Bishop Kyrillos of Erythres, who referred to the important offering of the “silent,” today, Holy Theological School.

“For centuries it has become a school, a teacher of virtues, not virtue, virtues, and guarding them. It taught the virtue of truth, honesty, humility, simplicity, unfeigned devotion to the Fathers, the exact Orthodox faith, obedience to the Church, the love of knowledge, justice, liberty, respect for one’s neighbor and acceptance of his otherness, honorable coexistence with one another, sacrificial and loving ministry. A sower, indeed, of all virtues, it cultivated and gave fertile fruit to Orthodoxy.”

The Abbot of the Monastery of the Holy Trinity noted that a virtue, that of silence, is nowhere else “so fluent, resounding, nourishing as here in this Sacred School, closed for many years, silenced but in all the world preaching patience, perseverance, but also the sure expectation of sadness, injustice, temptation. And because, in celebration of our patron today, Saint Photios, virtue and death are still pervasive, we believe with certainty, Your All-Holiness, Father and Master, that it is time, and not long from now, for you the Patriarch of the Genos to sound the historic bell and again mark the beginning of a silent day of prayer at the Seminary.”

Bishop Kyrillos expressed his gratitude to the Ecumenical Patriarch for his appointment as Abbot of the monastery a few months ago and after the promotion of his predecessor, Archbishop Elpidophoros of America.

He expressed his special thanks to the Ephorate of the Monastery and to the Archon Exarchos Athanasios Martinos for his decision to pay for the renovation of the facilities of the Sacred Theological School.