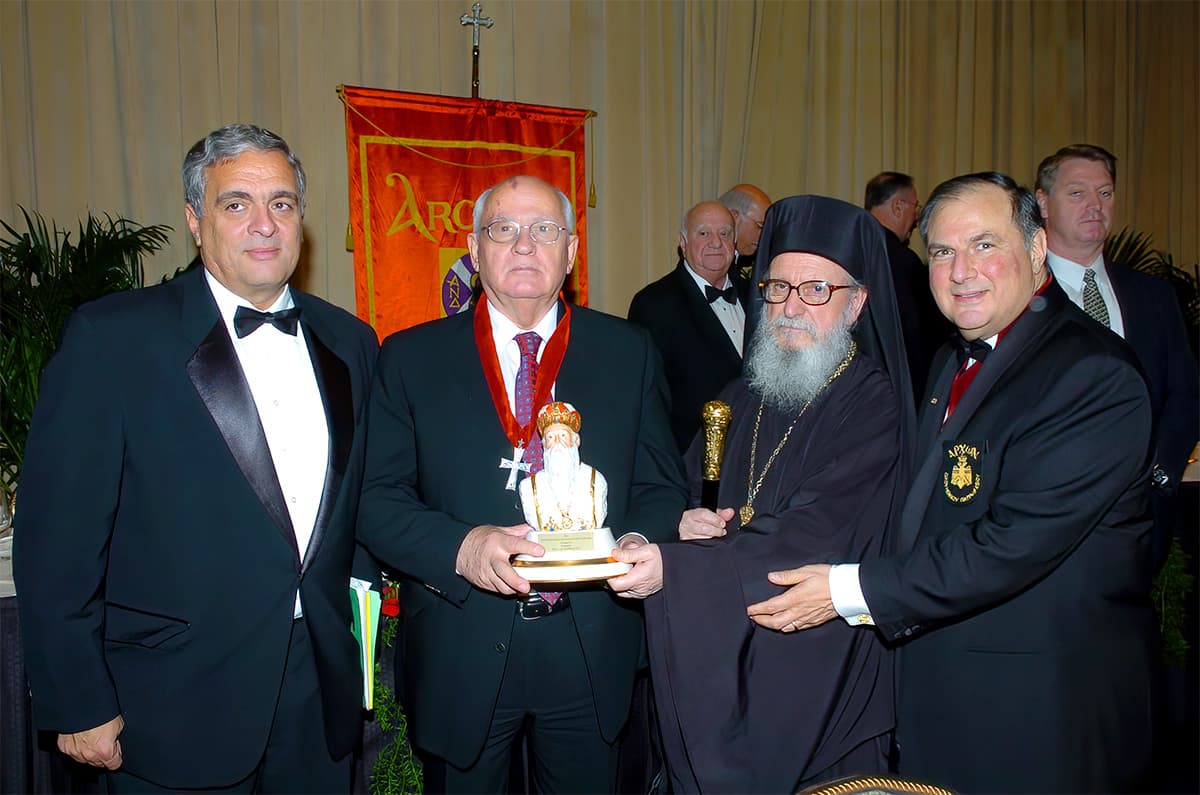 Nobel Peace Prize laureate Mikhail Gorbachev, the recipient of the 2005 Athenagoras Human Rights Award, passed away in Moscow on Thursday, August 30, 2022. He was 91.

The New York Times notes that Gorbachev, who led the Soviet Union from 1985 to 1991 and served as its last president, “set in motion a series of revolutionary changes that transformed the map of Europe and ended the Cold War that had threatened the world with nuclear annihilation.” One of the most profoundly consequential global leaders of the twentieth century and a principal architect of the international order that ensured peace for decades, President Gorbachev was presented the Athenagoras Human Rights Award by His Eminence Archbishop Demetrios of America and Dr. Anthony J. Limberakis, National Commander of the Order of Saint Andrew the Apostle, Archons of the Ecumenical Patriarchate, on October 22, 2005. 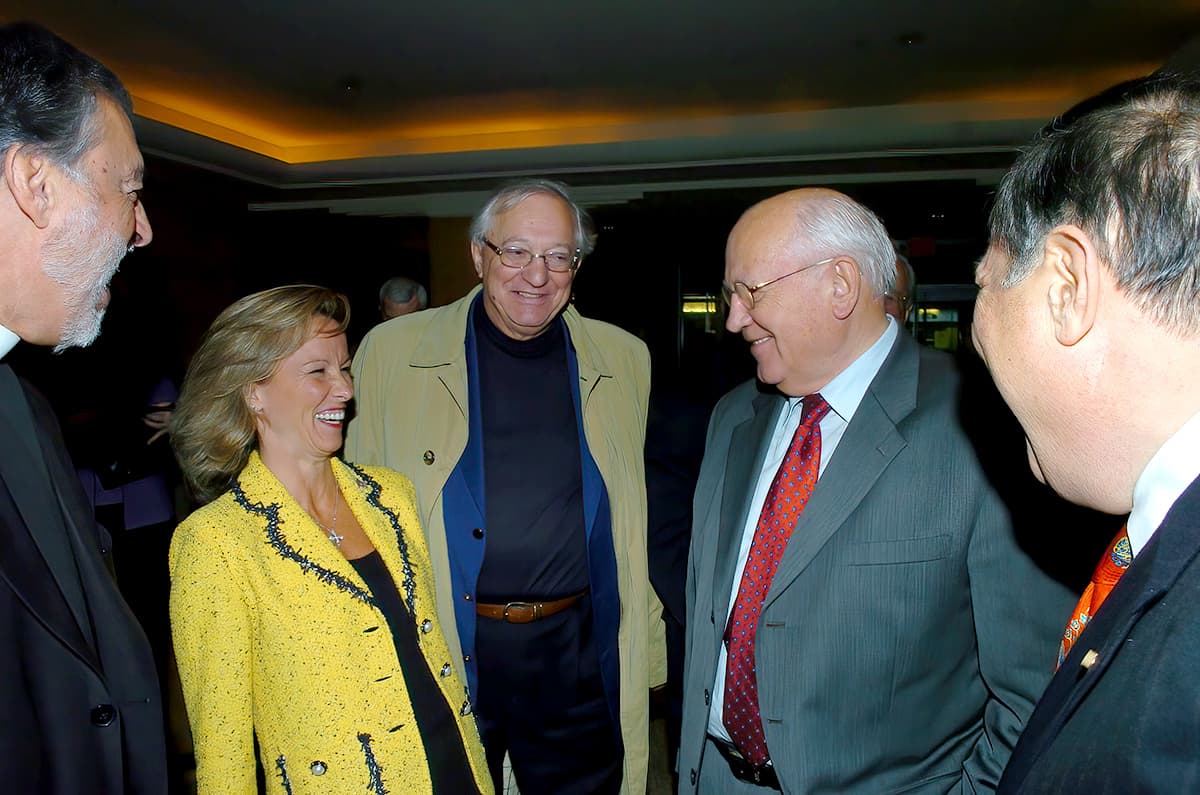 View a gallery of photos of the Athenagoras Human Rights Award banquet at which President Gorbachev was honored.

In a series of friendly and informal talks with Archon leaders, President Gorbachev revealed that he was secretly baptized as an infant in 1931 at the insistence of his mother, who was a devout Orthodox Christian. In addition to receiving the Athenagoras Human Rights Award, President Gorbachev was at the same time made an honorary member of the Order of Saint Andrew the Apostle, an Archon of the Ecumenical Patriarchate.

President Gorbachev was also awarded the Nobel Peace Prize in 1990 in recognition of “his leading role in the peace process which today characterizes important parts of the international community.” His leadership in the Soviet Union was characterized by the words perestroika (restructuring) and glasnost (openness) as he sought to suffuse Soviet society with a new transparency and respect for human rights. Perestroika and glasnost, according to the New York Times, “became the watchwords of the Gorbachev era.” 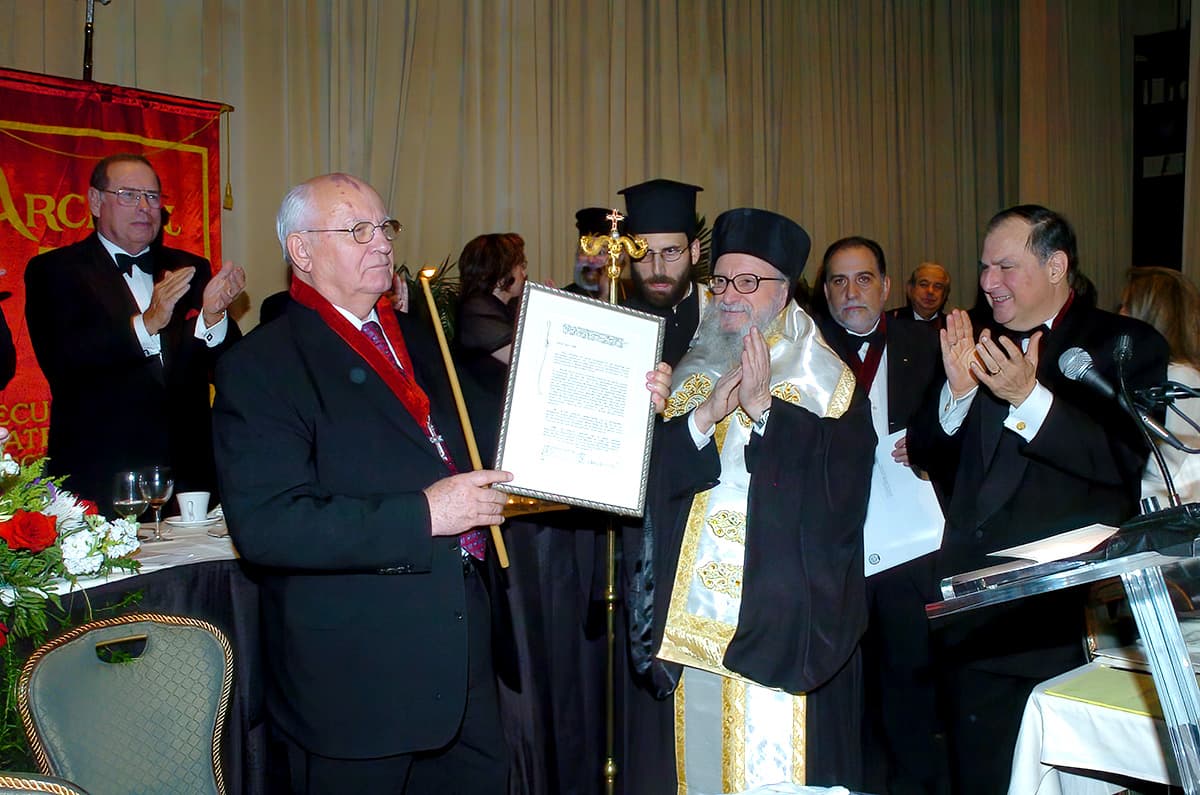 Mikhail Gorbachev was invested as an Archon that evening by His Eminence Archbishop Demetrios, formerly of America.

Upon Gorbachev’s passing, Archon Commander Limberakis stated that “Mikhail Gorbachev was one of the towering historical figures of the twentieth century, and a man who left a mark on the world that will be remembered with gratitude for centuries to come. His visionary and unique contributions to the end of the Cold War revealed him as a man of extraordinary depth and courage, with a character that was informed more than was generally known by the Orthodox Faith into which he was baptized. Let us all strive to emulate his willingness to stand for what was right no matter what the cost. May his memory be eternal!”

Established in 1986, the Athenagoras Award honors Ecumenical Patriarch Athenagoras, who served as Archbishop of the Americas for 18 years before being elected Ecumenical Patriarch in 1948. He was universally acknowledged as a visionary leader of Orthodoxy, numbering more than 300 million faithful worldwide, who worked for peace among Churches and people throughout his life.

The Award is presented every year at the Annual Banquet of the Order to a person, group or organization that has consistently exemplified by action, purpose and dedication, concern for the basic rights and religious freedom of all people. Previous recipients of the Athenagoras Award have included His Beatitude Metropolitan Epiphaniy of Kyiv and All Ukraine, Archbishop Iakovos, President Joe Biden, President Jimmy Carter, President George H.W. Bush, New York Governor Andrew Cuomo, Archbishop Desmond Tutu, Mother Teresa and Elie Wiesel.