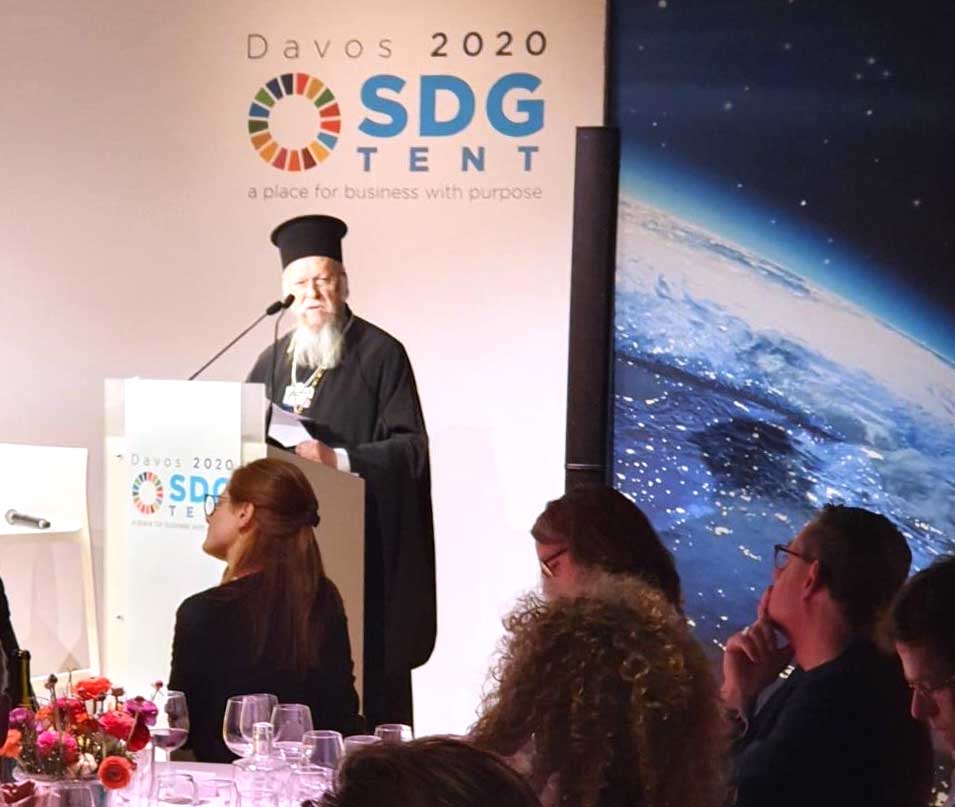 The work of the World Economic Forum in Davos, Switzerland, was completed yesterday, Thursday, January 23, a day on which His All-Holiness had a number of contacts and participated in extremely important debates that focused on the ecological problem and the issue of climate change. It was the third time that His All-Holiness participated in the World Economic Forum, held in the Swiss city, which this year was attended by 3,000 delegates from 117 countries, including 53 Heads of State.

In the afternoon, the Ecumenical Patriarch participated in a wide-ranging debate on “A Platform for a Community of One Trillion Trees” - a program supported by US President Donald Trump. In this discussion, His All-Holiness cited the example of the new saint of our Church, St. Amphilochios of Patmos, who in his confession instead of other penances required Christians to plant a certain number of trees and urged them to love and protect nature. This example of a saint of the Orthodox Church made a great impression on the many participating delegates. It should be noted that during discussion of this specific subject, the Platform was discussed, along with the possibilities for reforestation and the solutions to ecological problems, and their consequences, based on nature itself.

In the evening, the Ecumenical Patriarch delivered a speech during a formal dinner hosted by Mr. André Hoffman of the MAVA Foundation, WWF International and the World Economic Forum.

“Our Church, the Church of Constantinople, is well known for its ecological initiatives. One of our most intense concerns during our nearly thirty-year Patriarchal ministry has been to raise awareness of the need to protect the natural environment and the consequences of the continued degradation of nature, and the cultivation of ecological consciousness. Our ecological commitment stems from the very essence of our faith. We are convinced that our theological teaching of the relationship between Man and Creation can not only help discover the hidden dimensions of the ecological crisis, but also reveal the possibilities for dealing with it. The Ecumenical Patriarchate was the first to emphasize the spiritual and moral dimensions of the ecological problem, stressing the importance of the contribution of religion to the response to it,” His All-Holiness emphasized in his speech, adding: “The ecological crisis reflects an anthropological stalemate, the spiritual crisis of modern humanity and the contradictions of rationality, the arrogance of science and technology, the greed of conquest (‘its priority’) and the impasses of economics. That is why the solution of the ecological problem can not only be a matter of science, technology and politics, but also, perhaps, primarily a matter of radical change in thinking, new values, a new ethos. This is extremely important due to the fact that in the last few decades, a period of significant scientific progress, we have experienced a tremendous destruction of the natural environment. It seems that scientific knowledge does not touch the depth of our soul and mind. Man knows and continues to act against his knowledge. Knowledge did not lead to repentance, but led to cynicism and other obsessions.”

The Ecumenical Patriarch then pointed out that the problem cannot be addressed individually by an organization or a people, by science or technology alone, but cooperation is needed by all, as the ecological problem has clearly revealed that our world is one unity, and the problems we face, we face in common. For this reason, he reiterated, a multilevel mobilization, a convergence of views, joint effort and action is required. “We constantly point out that ecological and social problems are interconnected and must be dealt with together,” His All-Holiness emphasized, adding that the protection of nature and service to humanity cannot be separated.

“What we believe about our world, about nature and about our fellow human beings will determine how we behave towards them. We are convinced that this 50th annual World Economic Forum meeting here in Davos was an opportunity for inspiration, debate and change, and enhanced dialogue and cooperation, furthering our path towards creating a sustainable world, with cohesion, for one Home, our common home, for all people and for all living beings.”

His All-Holiness signed and dedicated to Mr. Gore the commemorative volume containing all his speeches and messages on the ecological issue.

The event ended with the Davos Forum, a global institution of particular importance, which is this year celebrating the 50th anniversary of its founding by Professor Klaus Schwab, who is now 82 years old. The work of the WEF this year has clearly borne the stamp of the ecological problem, and this is not accidental, given the extreme weather events of recent years in various parts of the world, with their devastating consequences, which have been particularly painful for the poorest and most deprived areas.