In this exclusive interview with the National Herald, Dr. Anthony J. Limberakis, the National Commander of the Order of Saint Andrew the Apostle, Archons of the Ecumenical Patriarchate, explains the mission of the Ecumenical Patriarch Bartholomew Foundation, the circumstances of its founding, the vital need it addresses, and why every Greek Orthodox Christian should support it. This illuminating and informative interview provides a concise explanation of the crucial importance of this new initiative.

Read this article on the web site of The National Herald

Dr. Anthony Limberakis, Archon Aktouarios and tireless Commander of the Order of St. Andrew for many years and the Chair of the Ecumenical Patriarch Bartholomew Foundation, spoke to The National Herald about the Foundation, its history, its progress, and its purpose. 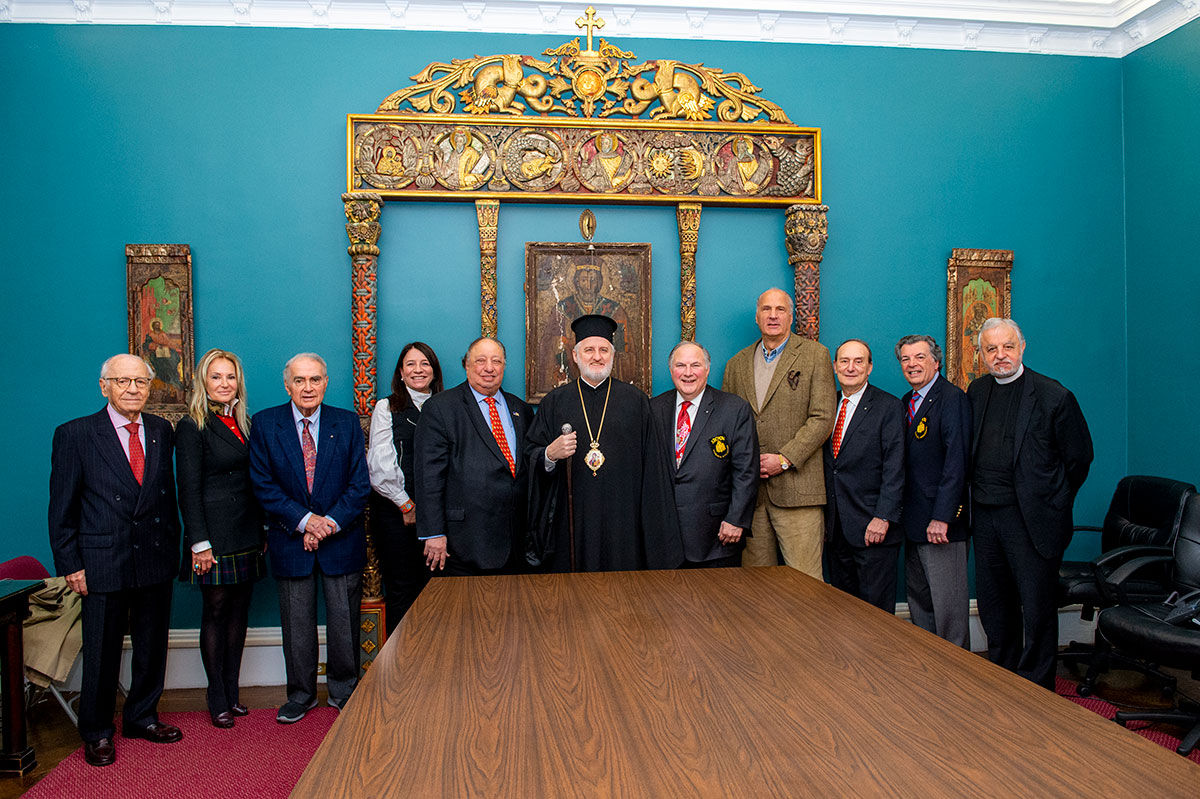 The National Herald: Dr. Limberakis, tell us about the Ecumenical Patriarch Bartholomew Foundation.

Dr. Limberakis: I have been looking forward to answering that question for almost 20 years! Thanks you so much Mr. Kalmoukos for the opportunity to do so!

A patriarchal foundation exclusively dedicated to fortify the financial underpinnings of the Ecumenical Patriarchate, the Spiritual Center of World Orthodoxy, has been the desire of many individuals for decades: Ecumenical Patriarch Bartholomew himself, Archbishop Elpidophoros even as a deacon, Fr. Alex Karloutsos and many Archons. In fact, it has been my dream to initiate this ever since my appointment as National Commander in 1998 because the Ecumenical Patriarchate has never had a reliable and consistent charitable foundation or endowment to fund its worldwide ministries, as do all other major faiths. However, over the years the Order prioritized addressing the existential threat of the egregious Religious Freedom deficit asphyxiating the Mother Church and our efforts were concentrated in that threatening realm. Nevertheless, in May 2018 I established a formal committee of the National Council of the Order of St. Andrew chaired by Archon George E. Safiol and co-chaired by Archons John A. Catsimatidis and Michael G. Psaros to seek the ways and means to establish a formal Patriarchal Foundation. The original committee was comprised of the Officers of the Order (Vice Commander John Halecky, Jr., National Secretary Hon. B. Theodore Bozonelis and National Treasurer Peter J. Skeadas) and Archons Tom Cappas, Tom Constance, Peter Kakoyiannis and Chris Stratakis who all had expertise in various fields: legal, financial and business. Spiritual guidance was offered by Fr. Alex, the Order's Spiritual Advisor, who actively participated in all the committee meetings, many of which were held in the board room of the company of Archon John A. Catsimatidis, the Order's Chair of the Religious Freedom Committee. These monthly committee meetings were detailed, substantive, and comprehensive.

When Fr. Alex and Presbytera Xanthi Karloutsos were selected to receive the 2018 Athenagoras Human Rights Award, the National Council voted to earmark all donations that would be raised from that event for the exclusive use of the Ecumenical Patriarchate, an event which raised a record $1.4 million and it was these monies which in essence established the initial funding of the Foundation. This milestone Athenagoras Human Rights Award Banquet was attended by individuals from around the world, including His Eminence Metropolitan Emmanuel of France (and now Geron of Chalcedon) and former Vice President and now President Joe Biden. By January 28, 2019 the Foundation was formally incorporated as a charitable entity in the State of New York, with our subsequent application to the IRS as a 501c3 application approved on August 26, 2020.

The election of His Eminence Elpidophoros of America on May 11, 2019 and his enthronement in New York City on June 22, 2019 assured the success of the Foundation. His Eminence is a true son of the Ecumenical Patriarchate, having spent his entire ecclesiastical life at the Phanar first as deacon, then as priest-monk, then as Metropolitan of Bursa, and finally as Abbot of the Holy Trinity Monastery on Halki (founded by St. Photios the Great in the 9th century) and Dean of the Halki School of Theology, which has been forcibly closed by the Turkish government for 50 years. His Eminence Archbishop Elpidophoros is the official representative of the Ecumenical Patriarch and is a voting member of the Board of Trustees.

When the organizing committee was deliberating on the various details of the Foundation, the members all felt strongly that the Foundation's Board of Trustees must include women and two outstanding Orthodox women now serve in that capacity: Maria Allwin and Aphrodite Skeadas.

The establishment of the Ecumenical Patriarch Bartholomew Foundation by the Order truly is a watershed response to a deep and longstanding need to establish a solid financial foundation for the Ecumenical Patriarchate. Indeed, the time has finally come for Orthodox Christians around the world to join together and ensure that the voice of the Apostolic Throne of Andrew never goes silent and the Spiritual Center of our Faith is able to lead Christ's Holy Church for generations to come. It is a global initiative to: 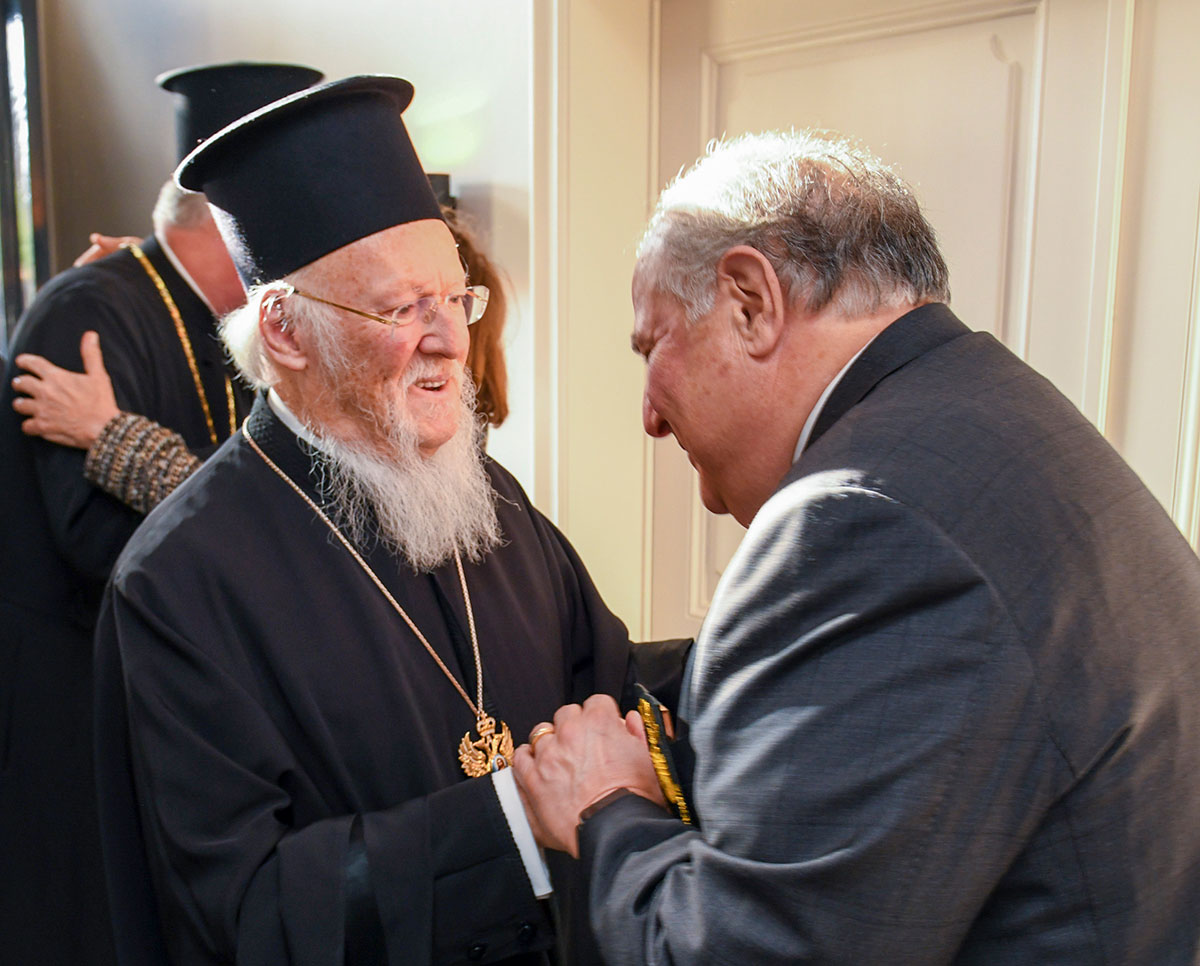 TNH: How can someone participate in this effort to assist the Mother Church?

Everyone can directly participate in the Foundation to ensure the economic strength of the Ecumenical Patriarchate…. From modest donations to the FOUNDING MEMBER level of $100,000. Simply go to our website (on which we are still working) at www.bartholomew.foundation, download our outstanding informative brochures, complete a pledge card and email it back to [email protected] Soon, you will be able to directly make contributions on the actual website. The Bartholomew Foundation enables each and every person to directly and very easily benefit the Spiritual Center of World Orthodoxy by making a contribution according to his or her abilities.

TNH: Why the delay of establishing such a Foundation? Don't you think it should have been established decades ago?

Dr. Limberakis: As much as there was a real necessity to establish a Patriarchal Foundation, the timing was never perfect, and it was put off while the Order was fighting in hand-to-hand combat for Religious Freedom for the Mother church here in the United States and overseas, as the lack of religious freedom was an existential threat to the Ecumenical Patriarchate and required urgent and immediate attention. Never forget the substantive and numerous initiatives of the Order:

So you see, Mr. Kalmoukos, the Archons have been fighting around the world and here in the United States for the religious freedom of the Ecumenical Patriarchate and now we have just begun to fight for its FINANCIAL FREEDOM! 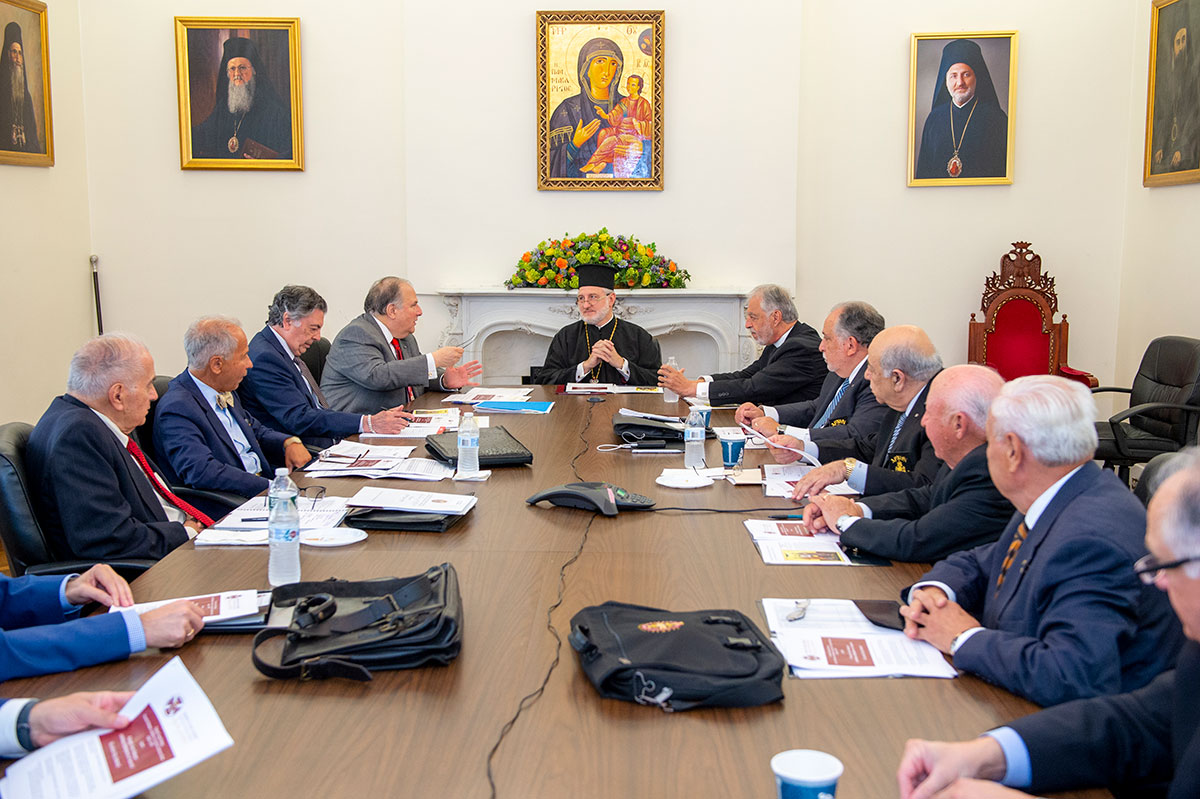 A meeting of the National Council of the Order of Saint Andrew under the spiritual leadership of His Eminence Archbishop Elpidophoros of America, together with Father Alexander Karloutsos, Archon Spiritual Advisor. (Photo by J. Mindala)

TNH: How much money do you anticipate to raise and in what timeframe? And I understand the response in these few weeks since the announcement of the Foundation has been very encouraging. How much money has been raised thus far and by how many participants?

In the few short weeks after sending out our fundraising brochures and pledge cards, we have raised $6.75Million, a remarkable feat which includes the extraordinary $1,458,000 direct contribution from the Order of St. Andrew, the vast preponderance of which was raised during the 2018 Athenagoras Human Rights Award Banquet honoring Fr. Alexander Karloutsos and Presbytera Xanthi and the $1,000,000 Matching Grant from the Nicholas J. and Anna K. Foundation. The Order of St. Andrew is designated as the FOUNDING BENEFACTOR and a FOUNDING MEMBER of the Foundation, along with 46 FOUNDING MEMBERS, as of April 10, 2021.

Ultimately, it is our dream and our aspiration as a Board of Trustees to raise $30,000,000 by the end of the year in honor of the unparalleled 30-year ministry of His All-Holiness Ecumenical Patriarch Bartholomew.

TNH: Can you please explain to the average Greek-American why it is important to support this Foundation?

Dr. Limberakis: The Ecumenical Patriarchate of Constantinople is the Mother Church of the One Holy Catholic and Apostolic Church, the Orthodox Christian Church, that is the Original Christian Church, unchanged for two millennia due to the vigilance and leadership of the Ecumenical Patriarchate. From the Ecumenical Patriarchate and the Ecumenical Patriarch who holds the status of primus inter pares (first among equals) world Orthodoxy receives guidance and inspiration through His All-Holiness Bartholomew's Martyria and Diakonia. His All-Holiness seeks peace and reconciliation among all peoples, advocates the preservation and sanctity of God's Creations, the environment, seeks common ground and dialogue with the Roman Catholics and other Christian denominations, speaks urgently against the heinous human trafficking that confronts the world's innocent victims and granted religious independence to the Orthodox Faithful of Ukraine when he issued their Tomos of Autocephaly on January 5, 2019.

By supporting the Foundation, one supports the Mother Church and ultimately the Word of God … In accordance with the Ten Commandments, honor thy Father and thy Mother; and that Mr. Kalmoukos is exactly what we are doing, Honoring our Holy Mother Church! Thank you so much for giving the Ecumenical Patriarch Bartholomew Foundation this tremendous opportunity to convey our message!

TNH: Who is going to oversee and manage the Foundation?

The Board is responsible for the stewardship of all funds donated which will be exclusively used for the worldwide ministry of the Ecumenical Patriarchate. The funds will be managed by the Board of Trustees and its Investment Committee chaired by Archon John A. Catsimatidis.

The Founding Members of the Ecumenical Patriarch Bartholomew Foundation are as follows (April 9, 2021):