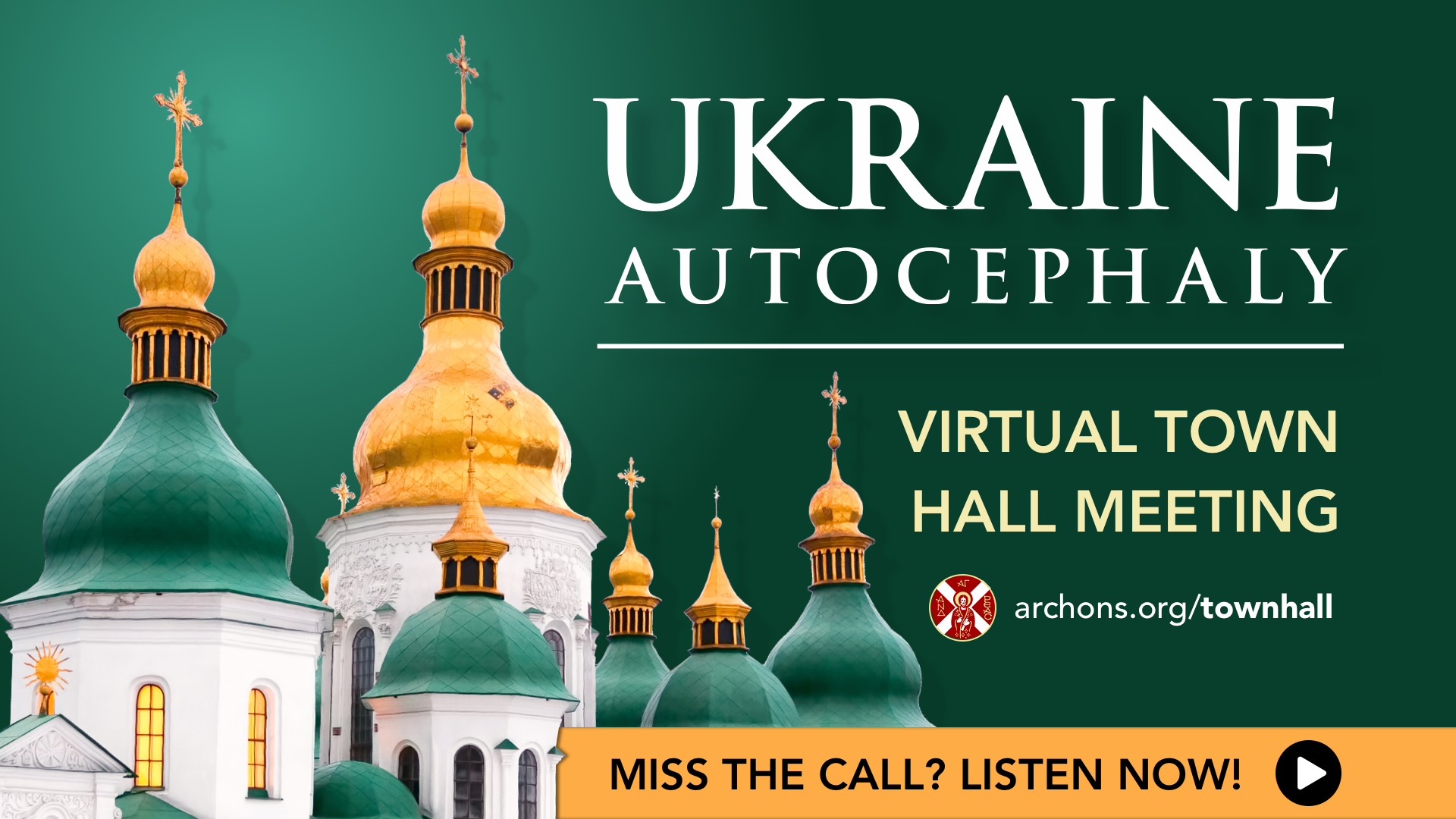 A full replay recording of the first-ever Virtual Town Hall Meeting hosted by the Order of Saint Andrew the Apostle, Archons of the Ecumenical Patriarchate, on Ukraine autocephaly is now available here. The Virtual Town Hall Meeting was a resounding success. Hundreds of Orthodox faithful from all over the world dialed in on Saturday, January 26, 2019, to hear an illuminating, edifying, and balanced discussion of the issues surrounding the autocephaly of the Ukrainian Orthodox Church and the prerogatives and responsibilities of the Ecumenical Patriarchate.

An expert panel delved into a wide range of questions from listeners regarding the autocephaly of the Church in Ukraine, cutting through complexities, explaining highly controverted issues, and placing this much-debated issue within its proper spiritual, ecclesiastical, theological, and geopolitical contexts.

Metropolitan Emmanuel explained: “For 27 years, we had a situation of division in Ukraine…The Ecumenical Patriarchate as the Mother Church was really interested in finding a solution. It was not about politics, or geopolitics. It was about doing something for those people who were there and were divided.”

Father Nicholas noted that the autocephalous movement in Ukraine “originated in 1917. From 1917 to 1921, supporters of autocephaly sought Ukrainization of Church life, primarily the use of vernacular Ukrainian for the Liturgy, and the restoration of certain customs that had disappeared since the eighteenth century.”

Dr. Shevzov placed the controversy over Ukraine autocephaly into its larger historical and geopolitical context, discussing how “the historical complexities of the distant past…are overshadowed and outweighed by the more immediate Soviet atheist past and its legacy….It is the impact of the Soviet experience on Orthodoxy which informs the ecclesial sensibilities and realities on the ground in today’s Ukraine.”

The panelists did not shy away from confronting some of the most difficult questions surrounding the issue of Ukraine autocephaly, including the treatment of the various Ukrainian Orthodox ecclesiastical bodies that existed before His All-Holiness Ecumenical Patriarch Bartholomew signed the Tome of Autocephaly for the Ukrainian Orthodox Church on January 6, 2019; the timing of the granting of autocephaly; the political considerations that are intertwined with this issue; the role of the Ecumenical Patriarchate as the Mother Church among the Orthodox Churches; and more.

The Order’s National Commander, Dr. Anthony J. Limberakis, at the conclusion of the Virtual Town Hall Meeting thanked the panelists and the moderator, and expressed his satisfaction at the “most candid, insightful, diverse and lively discussion.” He called it a “groundbreaking event for the Order of Saint Andrew, promoting dialogue, good will, and speaking the truth in love.”

Dr. Limberakis later added: “The Virtual Town Hall Meeting demonstrated that the Order of Saint Andrew’s dedication to informing the Orthodox faithful about the key issues confronting our Mother Church, and our commitment to hosting open, balanced and enlightening discussions in the service of the Ecumenical Patriarchate and all Orthodox Christians. Truly this was a groundbreaking initiative.”

Above all, the Virtual Town Hall Meeting explained why His All-Holiness Ecumenical Patriarch Bartholomew made the pastoral decision to grant autocephaly to the Ukrainian Church, as he himself explained Friday: “We consider it right to grant autocephaly to our Ukrainian Orthodox brothers, who have been deprived of sacramental communion with other Orthodox Churches for almost 30 years.”

Listen to the TownHall