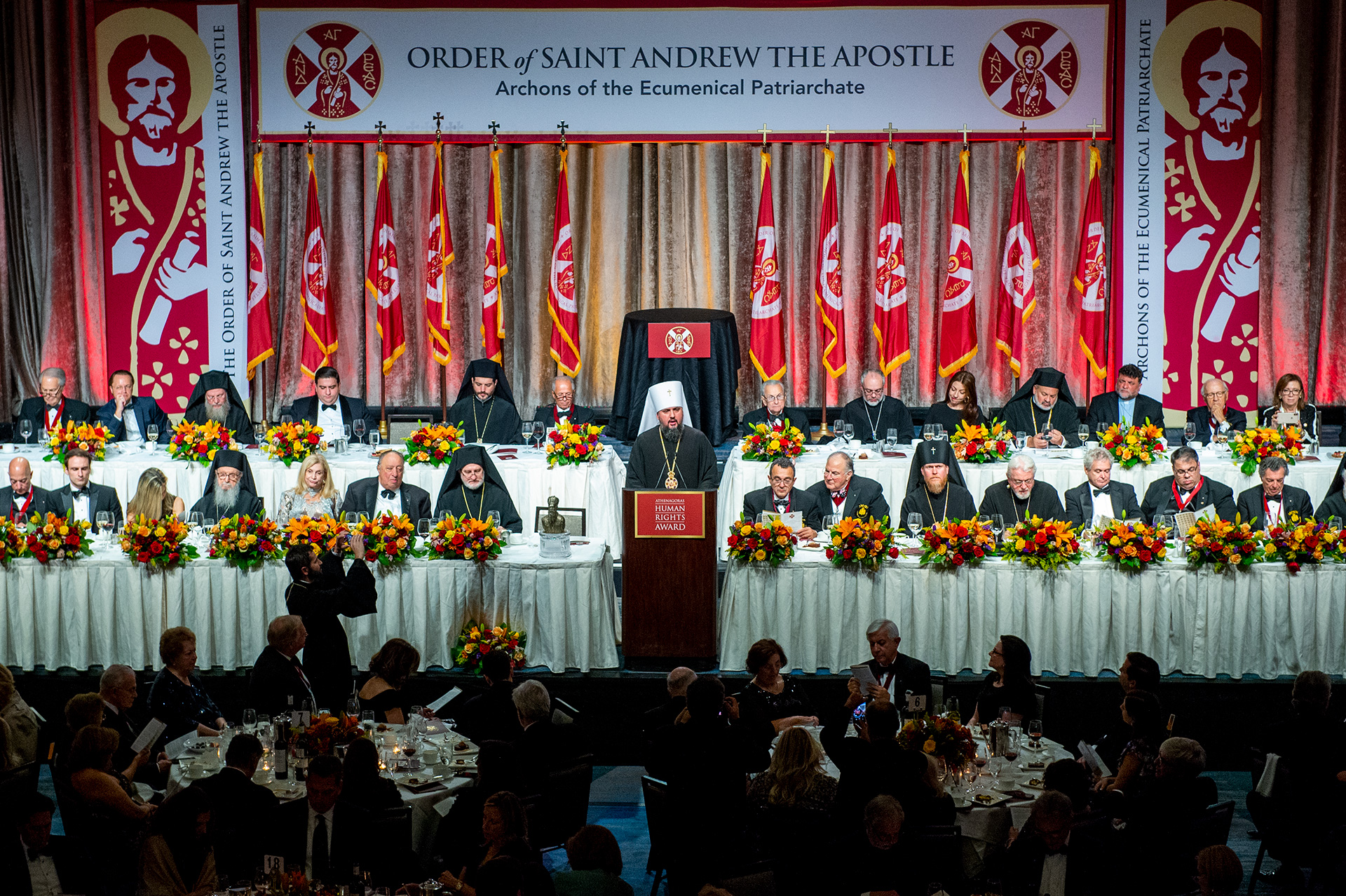 His Beatitude Metropolitan Epiphaniy of Kyiv and All Ukraine delivers remarks upon receiving the Athenagoras Human Rights Award at the Order of Saint Andrew the Apostle's annual Banquet at the New York Hilton Midtown, in New York City.
© J. Mindala

On Saturday, October 19, 2019, His Beatitude Metropolitan Epiphaniy of Kyiv and All Ukraine delivered the following remarks upon receiving the Athenagoras Human Rights Award during the annual banquet of the Order of Saint Andrew the Apostle, in New York City.

Your Eminence Archbishop of America Elpidophoros!

Honorable Sir Anthony Limberakis, National Commander of the Order of St. Andrew the First Called - Archons of the Ecumenical Patriarchate in America!

Dear guests of this celebration, dear brothers and sisters, ladies and gentlemen!

First, allow me to thank you with all my heart for the great honor shown to me today by the Order of Saint Andrew in awarding me the Athenagoras Human Rights Award.

If this award were for me alone, I would hardly dare to accept it, as I do not consider myself worthy to be placed among the ranks of the eminent persons and institutions who have been so honored in the previous thirty years. However, I do accept it, gratefully, not as a reward for me personally, but as a mark of the fruition of the work of hundreds of thousands - and even millions - of Ukrainian Orthodox believers in the Motherland and in the Diaspora. The Local Ukrainian Orthodox Church, fifteenth in the Diptych of Sister Churches, is the youngest to be proclaimed, but is ancient and glorious in its history. This Church, the Primate of which I was by Grace of God elected by decision of the Unification Council held on December 15, 2018, is the fruit of the long work, efforts, prayers and struggles of many generations of God-fearing ancestors, hundreds of hierarchs, many thousands of priests, and its millions of believers.

Particularly dramatic was the fate of our Church – and the fate of our people and country – in the last century. The respected contemporary American historian Timothy Snyder titled his book describing the suffering in the twentieth century of that part of Europe centered around Ukraine "Bloodlands". Indeed, our lands have been soaked with the blood of hundreds of thousands and even millions. Among them are martyrs for the Orthodox Church of Christ, destroyed by militant atheists. Among them are patriots who died in the struggle for national identity, for freedom and independence of their Motherland. Among them are the millions of people tortured by the Stalinist regime, decimated in one of the most brutal means devised by man, slow death by starvation through artificially created famine.

I am convinced that everyone gathered here feels as I do when I think of this suffering, these victims, and those who have given their lives for the sake of the Church, for the sake of their people and their homeland. This country, the United States of America, is not accidentally called the "land of the free and the home of the brave”; it is built on the fundamental principle that all people are endowed by their Creator with certain unalienable rights, among which are the right to Life, Liberty and the pursuit of Happiness. I am convinced that without this understanding - this deep Christian understanding - of freedom as a gift of our Creator, who not only confers rights but also imposes duties, America would have never become the country it did become: a light of democracy, an inspiration to enslaved peoples, and a defender of freedom in the world.

When, during one of my previous visits to the United States, I had the opportunity to visit your capital, Washington D.C., I was deeply impressed by the memorials, the memorials to Presidents Washington, Jefferson, and Lincoln; the memorials to those fallen in World War II and in Korea and Vietnam; the memorial to the martyred Reverend Martin Luther King. They differ visually and recall different events in history, but are united through a common theme, engraved succinctly on the wall of one of these: "Freedom is not free".

This idea is, in essence, deeply Christian. Our freedom - freedom not from temporary tyranny in the state or temporary enslavement by the invaders, but freedom from the tyranny of the devil, from the enslavement to sin and death - was won at a costly price. And, not just a great price, but by the highest price, the price of the life of the Son of God, our Lord Jesus Christ.

So when we fight for truth and for freedom, when love for our country and our people inspire us for sacrificial work and even to self-sacrifice, all this is intertwined with that to which we are called, that we are taught, and to the example given to us by our Lord and Savior Jesus Christ, which is conveyed in the short words of one of the two great commandments of God: "Love your neighbor as yourself" (Mark 12:31).

Each of us has a unique personality, but through our own experiences we can understand and relate to our fellow human beings; this is what, among other things, this commandment calls us to do. The joy of others can become ours, and the pain of others, our own pain, and in this way we can overcome the many planes of distance that separate us.

An example of this for me personally is what I have learned from Hellenic, Greco-Roman, and modern Greek history. For centuries, countless generations have been inspired by the example of Odysseus, who, despite all obstacles, finds his way to his home; by the self-sacrifice of the three hundred Spartans who were willing to stand against many thousands of invaders; by the wisdom of the ancient philosophers; by the words of the Holy Fathers of the Church inspired by Divine Grace; by the ascetic practices and example of life in prayer of the monks of Mount Athos and other monasteries; by the sermons of missionaries such as the enlighteners of the Slavs, Saint Cyril and Methodius; by the grandeur of the genius of the builders of the Hagia Sophia; by the sacrificial ministry of the Great Church of Christ of Constantinople; by the feats of the fighters for the independence of the Greek people - all of these are any invaluable treasure for all people, and, in particular, for the Ukrainian people.

One invaluable act of such true love was the Patriarchal and Synodal Tomos of the autocephaly of the Ukrainian Orthodox Church, received on January 6 this year from the hands of His All-Holiness the Ecumenical Patriarch Bartholomew. In full realization of how much courage would be required and how much he would suffer in the future from adversaries and lovers of lies, His All-Holiness found the courage he needed, for he was encouraged by love and by truth. We are deeply grateful to Ecumenical Patriarch Bartholomew personally and to our Mother Church of Constantinople for all that they have done and continue to do to ensure that the Church of Ukraine can, like every other Autocephalous Local Orthodox Church, in fullness continue its life-saving ministry among its people, as an integral part of the One Holy Catholic and Apostolic Church.

Current events reaffirm the importance of the mission of the Church of Constantinople - New Rome, and its Primate, the Ecumenical Patriarch, in World Orthodoxy. Lacking all about which the mighty people of this world brag, our Mother Church has truly become the living embodiment of the words of the Lord in manifesting a strength of God (2 Corinthians 12:9).

This June, on the day of the namesake of His All-Holiness Ecumenical Patriarch Bartholomew, I had the spiritual joy of praying with him in Constantinople. There, I was deeply moved by his words, in which he quoted one verse, comparing the Ecumenical Patriarchate with a lamp. Winds from different directions, especially from the north, have often tried and do still try to extinguish this lamp, but it continues to burn and shine. These words the Patriarch spoke through tears, understanding as maybe none of the rest us is capable of seeing, how violent these winds are and how difficult, but essential, it is to preserve the fire and the glow of this lamp.

I am convinced that His All-Holiness is a worthy heir to the throne of the Holy Hierarchs of Constantinople: the great fighter of heresy Gregory the Theologian, the ardent defender of truth John Chrysostom, the builder of the Church under tragic circumstances Gennadius Scholarius, and the martyr for the people Gregory V. So did Patriarch Athenagoras, a statesman of the Church and society of the twentieth century, work to raise the voice of Orthodoxy amidst the tumultuous noise of the last century, and in so doing open a new page in history, bringing bring forth good fruits in relationships among Christians and restoring the glory and honor of the Great Christian Church of Constantinople.

Did not the mighty powers of this world stand against him? Was there not even threats to his own life? Was he not compelled to suffer unjust reproach from the brethren in faith? Was it easy for him to steer the ship of the Church and to serve the unity and canonical order of the Word Orthodoxy? We know all the challenges he overcame to be rightly proclaimed among the most prominent ecclesiastical and public figures of the twentieth century.

At the beginning of my speech, I mentioned the Lincoln Memorial. And the memories of that place, which – God willing - I will see again in a few days, inspire me to conclude with the following thoughts.

Your Eminence Archbishop of America Elpidophoros, our hospitable host, remembers well our acquaintance and our first meetings. Just a decade ago, we could only dream of what now is a reality: about overcoming church divisions among the Ukrainian people, about a Patriarchal Tomos and a Pan-Orthodox proclamation of the autocephaly of the Ukrainian Church, about establishing Eucharistic union with our Sister Churches. Now, all that we could only dream of then is real. And at this moment, I would like to particularly thank Archbishop Elpidophoros for all that he has done so far and continues to do for the good of Orthodoxy and for our Local Church.

When I see His Eminence, I see also Archbishop Iakovos who courageously stood for equality and freedom of all men in America and joined the March to Selma. I think of the man who led that march, a man who today has his own memorial in Washington, a man who spoke on the steps of the Lincoln Memorial words that changed both America and the world. Words about a dream, a dream that is closer and closer to becoming true.

I also have a dream:

Today, this does seem like a dream. But, the dream of our people for their autocephalous Local Church did come true. From this, we can know that the dream of renewing the unity of the fullness of Orthodoxy can also come true. I pledge, as Primate of the Church of Ukraine, to work, and call all to work, to the realization of this dream.

May God help us!