Metropolitan Kallistos (Ware) to offer reflections on 50th Anniversary of the meeting between Pope Paul and Ecumenical Patriarch Athenagoras, June 28-29 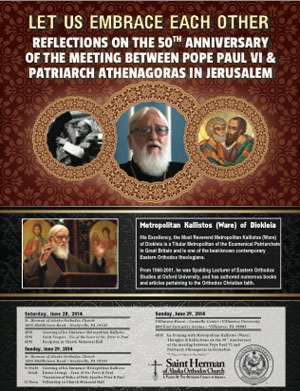 Gradyville, PA - His Excellency Metropolitan Kallistos (Ware) of Diokleia will be presenting a lecture, entitled, "Let Us Embrace Each Other: Reflections on the 50th Anniversary of the Meeting Between Pope Paul VI & Ecumenical Patriarch Athenagoras in Jerusalem," on June 28 - June 29, 2014. The lecture is presented by St. Herman of Alaska Orthodox Church in Gradyville, PA.

His Excellency is a Titular Metropolitan of the Ecumenical Patriarchate in Great Britain and is one of the best-known contemporary Eastern Orthodox theologians.

From 1966-2001, he was Spalding Lecturer of Eastern Orthodox Studies at Oxford University, and has authored numerous books and articles pertaining to the Orthodox Christian faith.