Ecumenical Patriarch: Precisely because the Mother Church is a Mother, She Loves All

Print Ecumenical Patriarch: Precisely because the Mother Church is a Mother, She Loves All
Mail 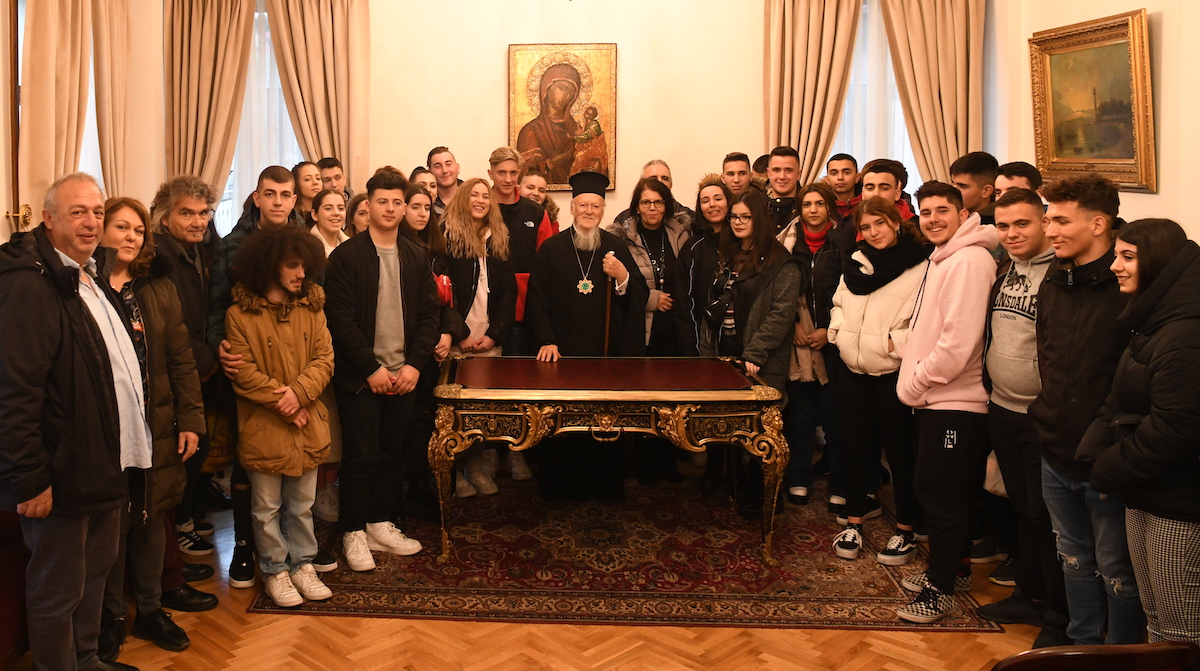 The Ecumenical Patriarch Bartholomew mentioned the timeless sacrificial offering of the Mother Church of Constantinople as he welcomed at the Phanar on Wednesday, February 5, a group of professors and students of EPAL Grevena, in the presence of the Archbishop Makarios of Australia and his auxiliary bishops.

“Coming to Constantinople is not an excursion, even an instructive, educational excursion, nor a tourist visit, but a pilgrimage,” His All-Holiness said, addressing the students in particular, adding that despite the fact that he had just returned from his trip to Abu Dhabi, he was able to meet with them, as the Ecumenical Patriarchate always looks after the youth of the future, but also because these students come from a very beloved Eparchy of the Ecumenical Throne.

“Constantinople is the spiritual womb of our Genos, here is the ark in which the sacred and holy things of our Genos are kept,” the Ecumenical Patriarch said in his address, and continued: “And we who are here and serve the Church and the Romiosini from this position, we consider it a special blessing of God and privilege, because we have received this lot, the blessing, to carry on the tradition of many centuries in which our Ecumenical Patriarchate is based here and serves not only its own spiritual children but all Orthodoxy, all Christianity and all humanity.”

As His All-Holiness said, the Ecumenical Patriarchate, during its centuries-long ministry in Istanbul, struggles, “sometimes under better conditions and sometimes under worse conditions, often in unpleasant conditions, but we are patient that better days will come and we will move on.”

On the occasion of the presence of the Archbishop of Australia, the Ecumenical Patriarch referred to the recent election of His Eminence Makarios, as well as to the election of new Shepherds for the other two major Eparchies of Throne, America and Great Britain, praising the spiritual gifts of the three Hierarchs.

“And most importantly, our new Archbishops will more closely associate our Christians there, in these distant countries, with the Sacred Center, which is here, our Ecumenical Patriarchate, and which, as I said before, is at the heart of Orthodoxy, is the spiritual womb of our Genos. The Ecumenical Patriarchate is of particular value to us Greek Orthodox, but also to all Orthodox Christians who have their reference here. And the newer Orthodox Autocephalous Churches, received from here their Autocephaly, their substance, if you will. Unfortunately, there are also ungrateful children, there are ungrateful ones, who do not appreciate what they got from Constantinople, baptism, culture, the Cyrillic alphabet, and what did they not get from here. The Mother Church of Constantinople sacrificed herself, emptied herself to give to others. And as our people say, we are heard and thanked by some of them. In any case, the Mother Church, just because she is a mother, she loves all. She was never a stepmother, as accused by a Metropolitan from the Church of Greece. She was and is and always will be a real mother.”

The Ecumenical Patriarch spoke to the teachers and students about his trip to the United Arab Emirates and his speech there, at the Interfaith Conference to which he was invited, as well as the Ecumenical Patriarchate’s initiatives in general, including raising the awareness of the world community of the need to respect creation and the protection of the natural environment.

He then urged the Archbishop of Australia to address constructive spiritual words to the students.

“Here is the Center of Orthodoxy, from here the whole Orthodox Church is pulsing and the body of Orthodoxy begins to breathe and take blood from here, from this Venerable Center of our Church,” emphasized His Eminence Makarios.

Then, after urging the students from Grevena to be consistent in their lessons and always read, because knowledge, as he said, is never ending, he offered them and their teachers little blessed items and souvenirs.

Afterwards, His All-Holiness received in an individual audience at the Patriarchal Office the Archbishop of Australia with his three new auxiliary bishops, Aimilianos of Meloa, Elpidios of Kyanea and Silouan of Sinope, as well as other associates from the Archdiocese, in order to receive the blessings and good wishes of their Ecumenical Patriarch and to inform him of developments in the ecclesiastical life of the distant continent.