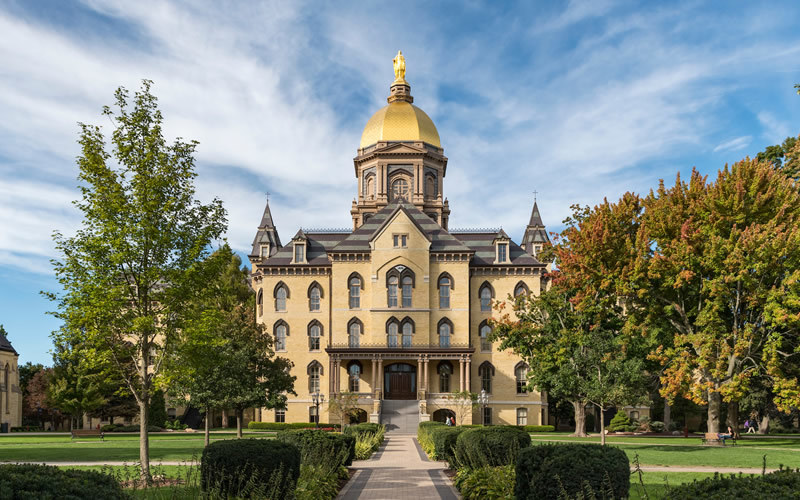 His All-Holiness Bartholomew, Archbishop of Constantinople-New Rome and Ecumenical Patriarch, will deliver the principal address and receive an honorary degree at the University of Notre Dame’s 175th commencement ceremony on May 17, 2020.

The President of Notre Dame, Rev. John I. Jenkins, C.S.C., noted that Ecumenical Patriarch Bartholomew “has been a champion for understanding and encounter among the world’s religions, as well as for environmental initiatives, religious freedom and human rights.” He added that Notre Dame was honored by the fact that during His All-Holiness’ visit to the United States in May, he “will take time to offer his reflections to our graduates and their families.”

Notre Dame News stated that His All-Holiness’ tenure “has been highlighted by ecumenical and inter-religious dialogue — including formal visits with Roman Catholic, Old Catholic, Orthodox, other Christian, Jewish and Muslim leaders — as well as efforts to promote religious freedom, human rights and protection of the environment. Known as the ‘Green Patriarch,’ he has said: ‘For human beings to destroy God’s creation, degrade the integrity of the earth and contaminate the planet’s waters, land and air — all of these are sins.’”

His All-Holiness Ecumenical Patriarch Bartholomew has received 35 honorary degrees, including numerous honorary doctorates from prestigious academic institutions throughout the world, such as the universities of Athens and Thessaloniki, Patras and Ioannina (in Greece), Georgetown and Yale (in the USA), Flinders and Manila (in Australasia), London and Edinburgh (in the United Kingdom), Louvain and Moscow, as well as Bologna and Bucharest (in Europe). He speaks contemporary Greek, Turkish, Italian, German, French and English; he is also fluent in classical Greek and Latin.

Ecumenical Patriarch Bartholomew was honored in 1997 with the Congressional Gold Medal, the highest civilian award bestowed by the U.S. Congress.

Born Demetrios Arhondonis in 1940 on the island of Imvros (today, Gökçeada, Turkey), Ecumenical Patriarch Bartholomew completed undergraduate studies at the historic Theological School of Halki, and pursued graduate studies at the Pontifical Oriental Institute of the Gregorian University in Rome (Italy), the Ecumenical Institute in Bossey (Switzerland), and the University of Munich (Germany). His doctoral dissertation, submitted to the University of Athens (Greece), was in the field of Canon Law, and he was a founding member of the Society of Canon Law of the Oriental Churches.

Ordained to the Diaconate in 1961 and to the Priesthood in 1969, he served as Assistant Dean at the Theological School of Halki (1968–72) before his appointment as Personal Secretary to the late Ecumenical Patriarch Demetrios (1972–90) as well as election as Metropolitan of Philadelphia (1973) and, subsequently, Metropolitan of Chalcedon (1990).