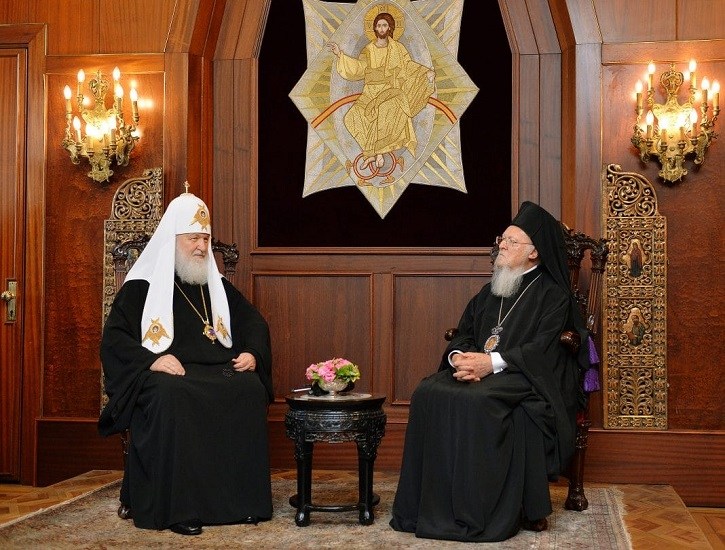 His All-Holiness Ecumenical Patriarch Bartholomew with Patriarch Kyryl of Moscow and All Russia.

In an exclusive commentary for The Orthodox World, Archon Evagelos Sotiropoulos, who writes about Orthodox Christianity for a number of publications, analyzes the question of the autocephaly of the Ukrainian Orthodox Church.

Exclusive: With Ukraine’s autocephaly, the Moscow Patriarchate shows its true face to the world

Metropolitan Epiphanios of Kyiv and all Ukraine was enthroned as primate of the Orthodox Church in Ukraine (OCU) on Sunday, February 3, 2019, at the Cathedral of St. Sophia in that country’s capital. This followed the granting of the Tomos of Autocephaly to the OCU by His All-Holiness Ecumenical Patriarch Bartholomew and the Holy and Sacred Synod of the Ecumenical Patriarchate of Constantinople on the Great Feast of the Theophany.

To describe these developments in global Orthodoxy as controversial would be a considerable understatement. The propaganda pushed and false narratives contrived by the Moscow Patriarchate (MP) and its satellite of supporters against the Church of Constantinople have been relentless and at times repulsive.

When did it become appropriate or acceptable for Christian dialogue and Orthodox discourse to descend into such darkness? Though what should one expect from some who use the Body and Blood of Christ as a bargaining chip in negotiations.

The issue of autocephaly for Ukraine is complex and multifaceted – there are different areas of focus and approaches used by those commenting on the issue, including, of course, this writer. While there are geo-political dynamics between Constantinople and Moscow, one area that is overlooked in all the hyperbole is the pastoral care of the Orthodox flock in Ukraine.

The motivation of His All-Holiness, like a sincere father who cares equally for all his children, was to offer compassion and bring comfort to the millions of Orthodox who found themselves outside of the canonical Church. The rapid opposition and smear campaign against him serves only to show the true character and now not so hidden agenda of his detractors.

Among the attacks levelled against His All-Holiness are his so-called pope-like power aspirations. When, for example, this same Ecumenical Patriarch granted autocephaly to the Church of Czech Lands and Slovakia in 1998, why was this action not derided and the canonical prerogatives of the Church of Constantinople not questioned? Was it perhaps because it aligned with the interests of the MP, who itself “granted autocephaly” to this local church in 1951 without any canonical basis to do so – but let us not be distracted by this double standard.

When the Ecumenical Patriarchate granted autocephaly to almost all of the non-ancient patriarchates in the nineteenth and twentieth centuries, was this also the behaviour of papal aspirants, or perhaps was it the acknowledgement by the Phanar of new global realities that necessitated a new pastoral approach. The Church of Constantinople acted then – as it is now – for what is in the best interest of the One, Holy, Catholic and Apostolic Church – not its own self advantage.

Being the First Throne of Orthodoxy comes with grave responsibilities. It requires the highest degree of spiritual maturity and an ethos of service as commanded by Christ: “But he who is greatest among you shall be your servant” (Matthew 23:11).

The reaction of the MP in response to the Orthodox Church in Ukraine’s autocephaly draws attention to its own true (papal) motivations, as well as the principles of its current leadership that are begrudgingly accepted by other local churches out of a sense of love and unity.

The Moscow Patriarchate has often done whatever it wanted: from granting “autocephaly” where and when it wanted without regard or any canonical basis to do so; to unilaterally establishing autonomous churches; to encroaching on the canonical territory of other local churches; to undermining and trying to disrupt and quietly sabotage pan-Orthodox dialogue and synodality.

The biggest threat of the Moscow Patriarchate is not towards the Phanar, but it is actually against other local Orthodox churches, who today may find themselves superficially close to Moscow, but tomorrow could find themselves on opposite sides if interests diverge. As a result, what we see today is some primates behaving defensively so as not to provoke the insecurities of the MP leadership, not out of love, but out of fear. Is this the future that primates desire for Orthodoxy?

Some local churches, for instance, have been eager to issue press releases and make pronouncements simply to make Moscow happy; if you peel away the veneer of these statements that have little if any long term significance, what you are left with are empty platitudes which serve only to placate the Moscow Patriarchate and ensure continued bilateral collaboration (and of course financial support). Some autocephalous churches appear publicly to be so beholden to Moscow that they behave as if they were an autonomous church under the rule of Patriarch Kirill.

Many are now calling for dialogue and the need for pan-Orthodox synodality to solve the issue of Ukraine; the pretense of virtue here knows no bounds. When Ecumenical Patriarch Bartholomew made concession after concession, mostly to Moscow, in order to realize the Holy and Great Council, it was not enough. When Ecumenical Patriarch Bartholomew agreed to have the autocephaly agenda item removed from the Council’s agenda, when he agreed to shorten the length of the Council, and when he agreed to move the location of the Council, it was not enough.

When four local churches turned their yeses into nos (cf. Matthew 5:37) at the very last minute before the Council of Crete, contrary to the holy canons** of the Church, were they acting in the best interests of the Church? But again, let us not be distracted by this double standard.

Returning to the criticism of the Church of Constantinople, and how empty it is, let us pose another question: if the actions of the Phanar are so canonically egregious, why has no other local church joined Moscow in formally censuring them? Perhaps it is because the Ecumenical Patriarchate is within its canonical prerogatives and historical right to do what it did in Ukraine (which the other local churches know).

Moscow must surely understand that the truth will prevail. This is one of the reasons why its efforts to disparage Constantinople are so fierce and unabating. The Tomos has been signed, the ink has dried, and this is the new reality in global Orthodoxy. In the long run, the Orthodox Church in Ukraine will consolidate parishes and faithful with love and a natural process of unity, as is already happening. The Moscow Patriarchate’s presence, together with its power and influence in Ukraine will diminish over time. It is likely that most local Orthodox churches will eventually formally recognize Metropolitan Epiphanios and concelebrate with OCU clergy.

When this recognition begins, the underhanded strategy employed by Moscow vis-à-vis the Holy and Great Council, namely, that since some local churches were not participating, they would not participate either, will boomerang against it. That is to say, once one or two local churches recognize the OCU, others will simply say they are following suite.

Time is not on the Moscow Patriarchate’s side. The torqued rhetoric will fall into obscurity and eventually be forgotten. In fact, one has to wonder what the marginal benefit to the MP’s propaganda is at this point – are they attracting new supporters or simply speaking into an online echo chamber?

The Moscow Patriarchate’s ambition to take over the First Throne of Orthodoxy makes its accusation against the Church of Constantinople that much more ironic, but once again, let us not be distracted by this double standard. It would be wrong and one-dimensional, however, to simply look at the issue of Ukraine autocephaly through this geo-political prism, especially since this is not what motivated the Ecumenical Patriarchate. Instead, the driving motivation was the pastoral care of the Ukrainian faithful. As Metropolitan Emmanuel of France stated on the recent Virtual Town Hall Meeting hosted by the Order of Saint Andrew the Apostle, the Church of Constantinople could not continue to ignore the situation despite numerous appeals by elected officials, clergy (including, with his own signature, Metropolitan Onufriy in 1991), and faithful for an independent church absent of foreign involvement and interference.

I have described His All-Holiness Ecumenical Patriarch Bartholomew as The Patriarch of Our Century. His humility is his strength. His vision for Orthodoxy is not for tomorrow, but for the years and even decades to come. The decision to grant autocephaly to the Orthodox Church in Ukraine will prove a seminal event in the history of the Church and the correct pastoral approach in order for all to be one in Christ. Those who have ears to hear, let them hear.

Archon Evagelos Sotiropoulos writes about Orthodox Christianity for a number of publications.

*Among many examples, there are significant similarities between the involvement of the Romanian government and the Ukrainian government in achieving ecclesiastical independence for their respective nations. See, The diplomatic negotiations carried out by the Romanian Government with the Ecumenical Patriarchate of Constantinople for the recognition of the autocephaly of the Romanian Orthodox Church (1885) by Mihai Sasaujan.

** Canon XIX (Council of Chalcedon, 451) addresses Synods of Bishops in provinces, and is reaffirmed by Canon VIII of the Sixth Ecumenical Council. Both canons build of off Canon XXXVII of the Holy Apostles. Quoting The Rudder by St. Nicodemus, Canon XIX in part reads as follows: “As for those Bishops, on the other hand, who fail to attend the meeting, but who, instead of doing so, remain at home in their respective cities, and lead their lives therein in good health and free from every indispensable and necessary occupation, they are to be reprimanded in a brotherly way.”