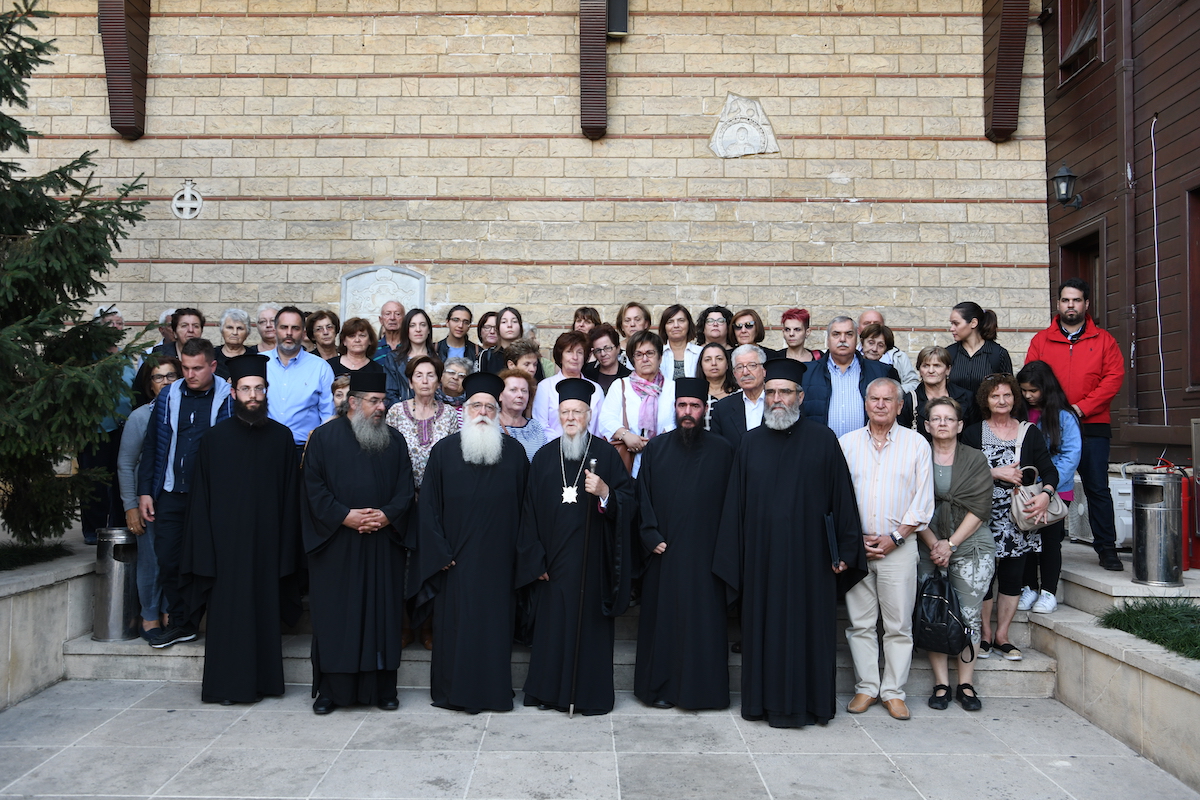 The Ecumenical Patriarch referred to the late Metropolitan Nicholas of Phthiotis, who recently fell asleep

Ecumenical Patriarch Bartholomew discussed the bonds of mutual appreciation and long-lasting friendship that attached him to the late Metropolitan Nicholas of Phthiotis, as he welcomed a group of pilgrims from the Holy Metropolis of Phthiotis on Monday, September 23 in the Phanar, headed by their Topotiritis, Metropolitan Ignatios of Demetrias and Almyros.

“With the blessed one we had spiritual communion, we had friendship and brotherhood in Christ, we corresponded,” the Ecumenical Patriarch said, visibly moved, and added: “The late Metropolitan Nicholas of Phthiotis loved and revered the First-Throned Church of Constantinople, and I am sure that his feelings towards Constantinople were also transmitted to his flock. To all of you. And your presence here today, clergy and laypeople, is a testament to your devotion and reverence for our Ecumenical Patriarchate, which is trying to fulfill the universal mission assigned to it by the providence of God, you know under what adverse conditions. We have been here as the Ecumenical Patriarchate for 1700 years, fighting the good fight; we are persecuted, we are slandered, fortunately we endure with the grace of God. And we go on. And I want to believe, and I always say in my speeches, that as the grace of God kept our Patriarchate here, at this crossroads of continents and peoples and cultures, for so many centuries, so it will continue to do so in the future, no matter what happens around us, whatever political rearrangements are made, it will keep it here for centuries to come, and from here the First-Throned Church will continue to serve all Orthodoxy and all mankind. And I say all mankind, because the Ecumenical Patriarchate is not only a religious institution, but also a cultural institution.”

His All-Holiness expressed the hope that the new Metropolitan of Phthiotis, who will be elected by the Synod of the Hierarchy of the Church of Greece, which meets on October 8, “will be a worthy successor of the late Nicholas, and that he will love you and embrace you, and that you will respect him, and receive him in a spirit of obedience and humility, and that he will have the clergy by his side as his valued associates, and will promote the ecclesiastical work of your Metropolis to the glory of God.”

The pilgrimage visit was scheduled before the sudden death of the late Metropolitan Nicholas and canonically, according to the original plan, he would be at the head of a group of clergy and faithful of the Metropolis of Phthiotis in order to request in person from His All-Holiness the canonization of the late Geron Vissarion, monk of the Monastery of Agathonos.

“Our emotion is great because he should be here at this moment to address you and make the request,” Metropolitan Ignatios of Dimitrias and Almyros said in a brief speech, presenting the clergy and faithful from the Holy Metropolis of Phthiotis. “When I was asked if the pilgrimage would take place, I felt the need to say yes, it would take place, because that is what the late Nicholas wanted. Do not cancel. And I have just undertaken, as Topotiritis, to accompany the flock, the General Hierarch, the Holy Abbot, and all the people who are before you with emotion, making the request already made by the Holy Synod of the Church of Greece for the recognition of the holiness of Geron Vissarion.”

The Protopresbyter Neophytos Rafaelides, General Hierarchical Overseer of the Holy Metropolis of Phthiotis, then spoke, as well as Archimandrite Damaskinos Zacharakis, Abbot of the Monastery of the Dormition of the Theotokos of Agathonos, where the Geron Vissarion served until his death.

His All-Holiness said that the request would be considered by the Canonical Committee, which has just completed its study of the dossier, and would submit its report to the Holy and Sacred Synod of the Ecumenical Throne for a ruling.

The Ecumenical Patriarch also spoke warmly of Bishop Ignatios of Dimitrias and Almyros, with whom he later had a private meeting. “He always stood on the side of the Ecumenical Patriarchate, and he, like the late Nicholas, has always been a supporter of the positions of the First-Throned Church in the various Inter-Orthodox Committees, in which he worthily represented the Church of Greece, and has assisted us, contributing to the preparation of the texts both at the Holy and Great Synod and formerly in Geneva, during the preparatory phases of the Holy and Great Synod, and more recently on the Ukrainian issue, he has always been on our side and I take this opportunity to express our thanks and patriarchal gratitude to him.”

His All-Holiness then prayed the Trisagion at the Patriarchal Church for the repose of the soul of the late Metropolitan Nicholas of Phthiotis, and the Metropolitan of Dimitrias and his pilgrim companions were present.