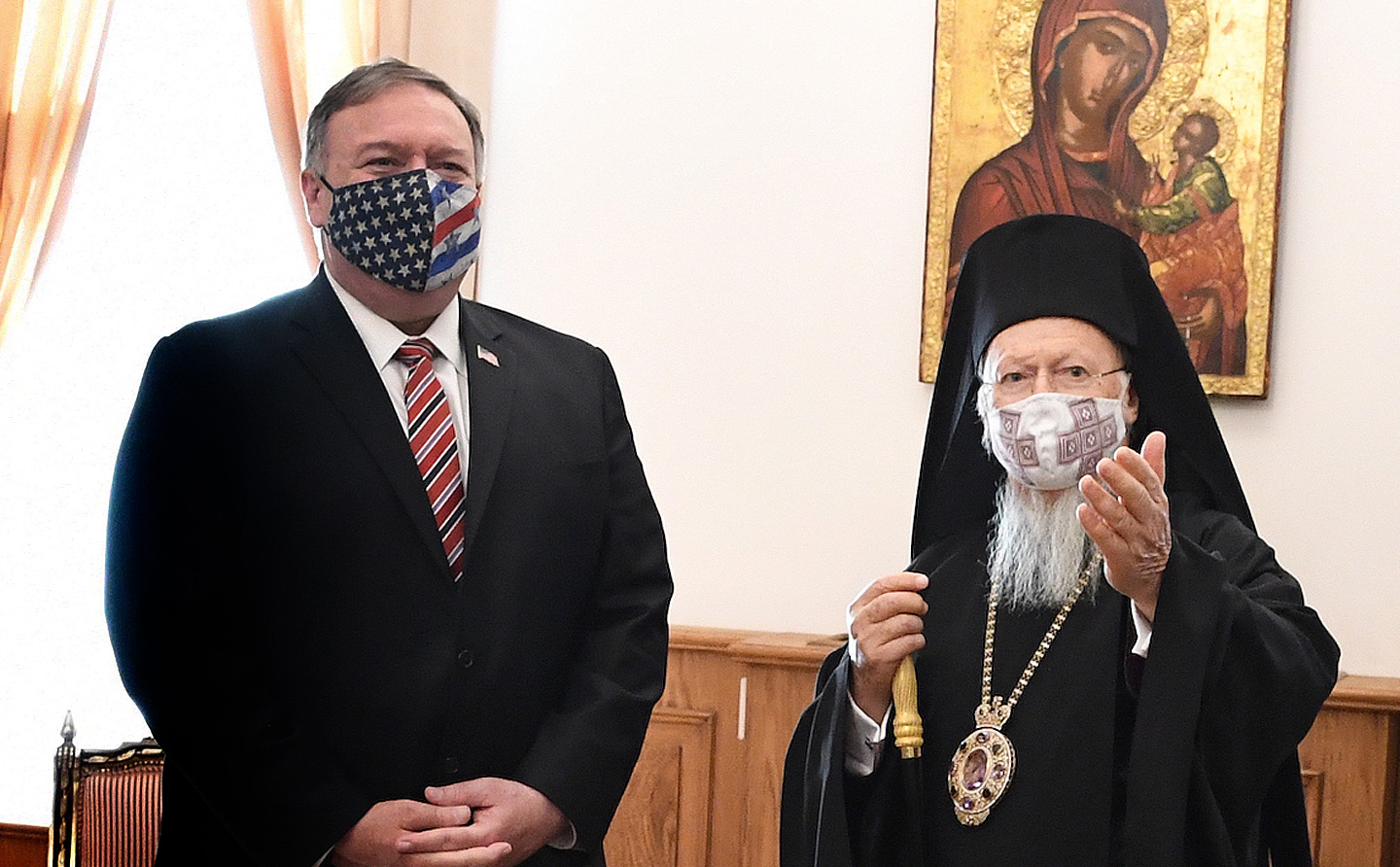 The Secretary of State of the United States of America, His Excellency Michael R. Pompeo, paid a visit to the holy See of the Ecumenical Patriarchate in the Phanar, today, Tuesday, November 17, 2020 and was received with special honor.

At the entrance of the Ecumenical Patriarchate, the Secretary, who was accompanied by his wife Mrs. Susan Pompeo and the US Ambassador to Ankara, Mr. David Satterfield, was welcomed by His Eminence Metropolitan Emmanuel of France, accompanied by the Grand Chancellor, the Rev. Archimandrite Andreas and the Rev. Archimandrite Joachim, Chief Secretary of the Holy Synod. Afterwards, Secretary Pompeo, his spouse, Ambassador Satterfield and their company, paid their respects in the venerable Patriarchal Cathedral, where the Patriarchal Deacon, Iakovos Krochak, informed them about its history, as well as about the holy relics and spiritual items treasured in it.

Afterwards, the Grand Chancellor, Father Andreas, accompanied the Secretary to the Eugenides Palace, where in the Auditorium he was received and welcomed, in accordance with the proper protocol, by His All-Holiness Ecumenical Patriarch Bartholomew, who expressed his joy at the visit of the head of American diplomacy.

During the especially cordial meeting that followed, Their Eminences Metropolitan Emmanuel of France and Maximos of Sylivria, the Rev. Archimandrite Joachim, Chief Secretary of the Holy Synod, Deacon Kallinikos and the Honorable Mr. Panteleimon Vingas, Archon Chartophylax, as well as Mrs. Pompeo and Ambassador Satterfield.

At the center of their discussion, which lasted about an hour, were issues that concern the Ecumenical Patriarchate, the Omogeneia of Istanbul and the Orthodox faithful in the country. They also discussed Orthodoxy in the world, and the course of inter-Christian dialogue. Regarding the USA, His All-Holiness referred to the multifaceted work of the Greek Orthodox Archdiocese of America, but also of the Omogeneia, which is a brilliant and dynamic part of American society. They also had the opportunity to discuss issues of wider interest, such as the initiatives of the Ecumenical Throne to raise global public awareness of the need to preserve the Creation and the protection of the natural environment, as well as the Interreligious Dialogue aimed at promoting peaceful coexistence and reconciliation between different peoples and cultures. In this context, there was an exchange of views on the issue of respect for fundamental rights and religious freedom in the world, which the United States is known to have an interest in strengthening. His All-Holiness stressed the need to protect Christians, but also all religious communities in the Middle East, which in recent years have been severely tested by war, with a large number of them experiencing uprooting and refugee status.

Statement of His Eminence Emmanuel, Metropolitan of France

Immediately after, His Eminence Metropolitan Emmanuel of France, in a statement to the media, described the US Secretary of State’s visit to the Phanar as historic, recalling that other US Secretaries of State had made similar visits to the Ecumenical Patriarchate. He said that issues of religious freedom and fundamental rights, the protection of the Christian presence in the Middle East, and issues of Orthodoxy around the world were discussed.

“As the Ecumenical Patriarchate, we bear the responsibility for the unity and the good of Orthodoxy and an important role in the prevailing of peace in the world. Religious communities can play a very important role in maintaining peace and stability on the planet, and we all know that.”

Asked if the issue of Hagia Sophia had been raised by Secretary Pompeo, the Metropolitan of France said that the issue had been discussed, but it was not his responsibility to comment. He recalled, however, that His All-Holiness has repeatedly referred to the issue and has expressed the views and the regret of the Ecumenical Patriarchate for this political decision.