Ecumenical Patriarch: The Phanar, no matter how little oil it has left, will not stop sending forth light and proclaiming the Truth in every direction

Print Ecumenical Patriarch: The Phanar, no matter how little oil it has left, will not stop sending forth light and proclaiming the Truth in every direction
Mail 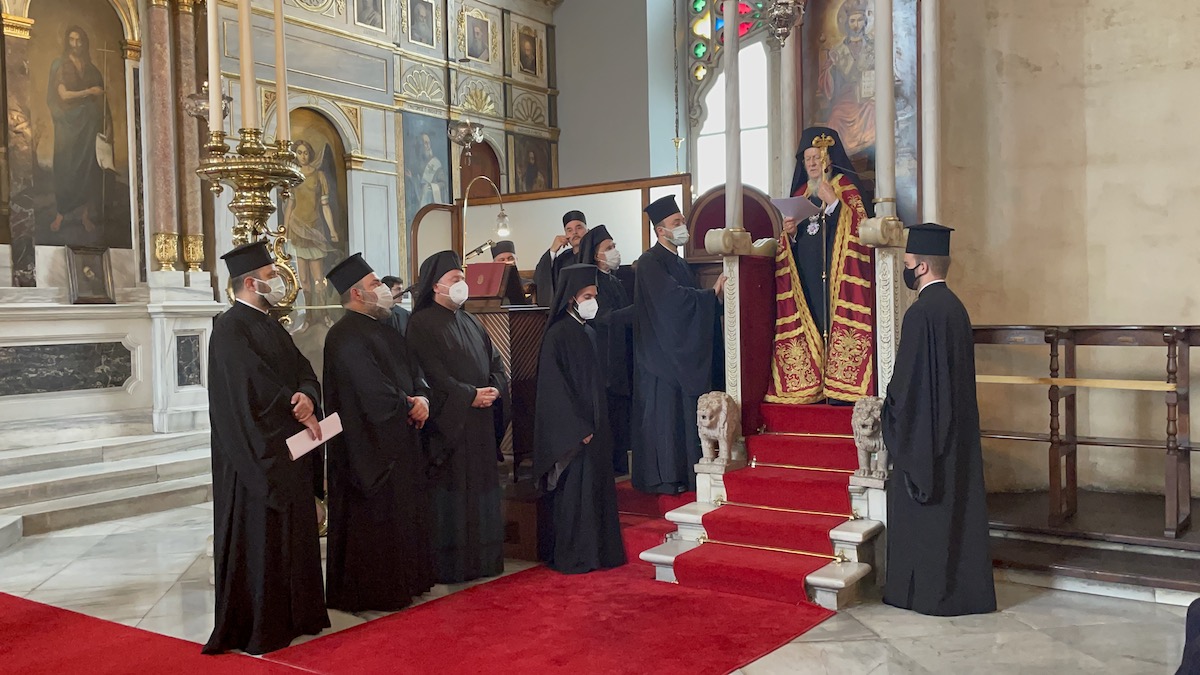 On the subject of the central motto of the Great Synod, “He called all to unity,” His All-Holiness pointed out that this unity was emphasized by the Synod of 2016, despite the absence of four Orthodox Autocephalous Churches.

“This year, also, we thought to come to this beautiful marble Church of the All-Holy Trinity, which is also the work of the piety of our fathers, in order to honor the Paraklete, the Spirit, and to hear “what is pleasing to the Lord.” And that which, above all else, today’s great feast teaches us is 'pleasing to the Lord' is unity, and we have the model of ideal unity in our Triune God: three persons - one Deity. That is why today we celebrate the Holy Spirit, one in essence and one in honor and one in glory with the Father and the Son, we celebrate this Holy Trinity.

“And we say that unity is the lesson of the feast, because the Most High God, 'When He dispensed the tongues of fire, He called all to unity.' Repeating these verses of the Kontakion of Pentecost, it is difficult for our thoughts and hearts not to travel to the saint-bearing island of Crete, in Kolymvari of Chania, where the Holy and Great Synod of the Orthodox Church met, under the presidency of Our Humility, exactly five years ago, and specifically on June 20, 2016, the Monday of the Holy Spirit, as today, with the central motto the phrase 'He called all to unity.'

"This unity was restated by the Synod in Crete, despite the absence, literally at the last minute, of four Orthodox Autocephalous Churches. These Churches did not honor their protocol; nor did they respect the efforts of their representatives and the sacrifices of decades, which all the Orthodox Churches underwent, led by the Holy Great Church of Christ, as they generously shouldered the financial cost of the whole undertaking.

"Nevertheless, the Holy and Great Synod, by divine grace and blessing, took place and is already a historical event, for which we rejoice and glorify the merciful God. And we urge you also, from this place, to study the important texts and decisions of the Synod and to be inspired by them, in order to walk in your life, as today’s apostolic reading says, 'not as unwise men but as wise, making the most of the time, because the days are evil....understand what the will of the Lord is.'"

His All-Holiness pointed out that from the standpoint of the Ecumenical Patriarchate, there is always the disposition and invitation to all for unity and solidarity.

“On the one hand there is all the will and effort, and we are always called, from this sacred place and on this great day of our faith, in response to the call to unity and oneness of the Mother Church, which, as always, and also today, is available to all her children everywhere in the world, because their service and sanctification and salvation are the reason for her existence.

“Towards the Great Church, our Ecumenical Patriarchate, the souls of millions of believers from all over the oikoumene turn reverently and nostalgically. And this is not just for sentimental reasons, but because the Ecumenical Throne has proven over the centuries that it is a beacon of light, capable of offering light, hope and relief in all directions, to all of those who in various ways ‘labor and are heavy laden.’”

At this point, the Ecumenical Patriarch, recalling the words of the late Patriarch Elias of Antioch, who, in an address in 1976, emphatically referred to the importance and role of the Ecumenical Patriarchate, and emphasized, among other things, that the Phanar, “as little oil as it has left, will not stop sending forth light and proclaiming the Truth in every direction.”

“In this spirit, we vividly remember the words of the late Patriarch Elias of Antioch, who, in the year 1976, in his response to the then-Hegumen of the Patriarchal and Stavropegic Monastery of Vlatades in Thessaloniki, said, among other things: ‘The Church is not millions of people. The Ecumenical Patriarchate thunders to us, precisely because it has a small number, that its Ecumenical character is dogma, it is faith, it is a positive energy of the incarnate Word. The Ecumenical Patriarchate is the lamp that shines and illuminates. It illuminates light of the faith and the traditions.’

“And the moral of our story is told by the Spirit of truth and Revelation, in the Revelation of John: ‘He who has an ear, let him hear what the Spirit says to the churches.’ Whoever is pessimistic about matters here, hear what the third-ranking Patriarch of Orthodoxy said. Whoever is disappointed, hear how important the fact that just a few are left here may have. Is it necessary to repeat with the poet that the few in history have guarded and always guard Thermopylae?

“The Phanar, no matter how little oil it has left, will not stop sending forth light and proclaiming the Truth in every direction. In the certainty that it always speaks the truth, inspired and guided by the Spirit of Truth Whom we honor today. The Phanar, no matter how few are left who hear what the Spirit says to the Church of this City of Istanbul, will not cease to be the lamp that shines and illuminates, as the late Elias of Antioch said, the lamp that shines and illuminates, for twenty-one centuries now, from here in this City, and which will shine and illuminate in the future, always from this City, the See of the Great Church of Christ.”

And His All-Holiness continued:

“We are personally grateful to the Lord because, in His unsearchable will, He called us to the Ecumenical Throne thirty years ago and gave us all of you as a direct flock, constituting the community of this historic City, and remaining closely connected with the Mother Church, in a mutual self-giving on occasions of joy and consolation, or, if God so willed, in the crucifixion and fellowship of the Church and the flock in the passion, but such sad moments of our historical life are followed by the resurrection, and we continue our course 'never forsaking obligation or duty.'"

The Ecumenical Patriarch cordially thanked His Eminence Metropolitan Germanos of Tranoupolis, Hierarchical Head of the Community of Stavrodromi, “for his always fruitful and sacrificial ministry in the region of Stavrodromi for almost half a century,” as well as the God-loving Bishop Benjamin of Tralles, who supports the Metropolitan of Tranoupolis, and who “within a short time has managed to win the love and appreciation of the parishioners of the Hagia Triada and the other Christians of the Community.” He also congratulated the active Chairman of the Board of Trustees of the Megalonymos Community of Stavrodromi, the Hon. Mr. Georgios Papaliaris, and his associates, for their multifaceted work for the benefit of the members of the Community.

Concluding his speech, His All-Holiness addressed all the children of the Omogeneia and especially the students of Zografeion, a delegation of which went to the church today, along with the Principal and teachers of the historic school.

“We especially want to wish paternally the beloved students of the Zografeion, and also all the children of our Omogeneia, happy, blessed and relaxing holidays, so that they can return in September with health and a love of learning for the new school year. Our beloved children, you are our boast and our hidden joy. We know that last year was particularly difficult for you because of the restrictions imposed on the life of learning, in order to avoid further dispersal of the coronavirus. We congratulate you wholeheartedly, as well as your good and worthy teachers, under the inspired direction of the most honorable Archon Referendarios Mr. Ioannou Demirtzoglou, for your strength and appetite for education and letters. May the Holy Spirit protect you, enlighten you and guide you.”

Previously, the Ecumenical Patriarch was welcomed by the Metropolitan of Tranoupolis and the Chairman of the Ephorate Committee of the Community.

Present in the church were the God-loving Bishop Benjamin of Tralles, the Hon. Mr. Stavros Christodoulidis, Consul of Greece in Istanbul, and many believers from Istanbul and pilgrims from abroad.