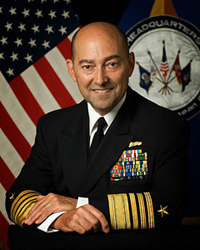 The Order is pleased and honored to announce that Admiral James G. Stavridis, USN, Supreme Allied Commander and Commander of the United States European Command, will be the recipient of this year’s Athenagoras Human Rights Award.  Admiral Stavridis will accept the award on behalf of the heroic members of our Armed Forces who place themselves daily in harm’s way to protect our freedom, liberties and American way of life.

The Athenagoras Human Rights Award will be presented to Admiral Stavridis, Saturday night, Oct. 15, during the Grand Banquet of the Order of Saint Andrew, which will be held as part of the Order's annual three-day assembly, Friday, Oct. 14 through Sunday, Oct. 16, at the Hilton Hotel in New York City.

National Commander Anthony J. Limberakis, MD said, “With the presentation of the 2011 Athenagoras Human Rights Award to Admiral James G. Stavridis the Order is recognizing the extraordinary contributions of the 2.3 million members of our nation’s Armed Services who protect our inalienable freedoms bestowed to us by our Creator, but are only experienced by a minority of the world’s 7 billion inhabitants.”

Admiral Stavridis is the current Commander, U.S. European Command (USEUCOM) and NATO’s Supreme Allied Commander Europe (SACEUR). He is a 1976 distinguished graduate of the U.S. Naval Academy and a native of South Florida.

Stavridis earned a PhD and MALD (Master of Arts in Law and Diplomacy) from The Fletcher School of Law and Diplomacy at Tufts University in International Relations in 1984, where he won the Gullion Prize as outstanding student. He is also a distinguished graduate of both the Naval and National War Colleges.

He holds various decorations and awards, including the Defense Distinguished Service Medal, the Defense Superior Service Medal and five awards of the Legion of Merit. He is author or co-author of several books on naval ship handling and leadership, including Command at Sea and Destroyer Captain.

The Athenagoras Human Rights Award is presented pannually by the Order to a person or organization, which has consistently exemplified by action, purpose and dedication, concern for the basic rights and religious freedom of all people.

To learn about the history and origin behind the Athenagoras Human Rights Award and for resources on past recipients, visit archons.org/athenagorasaward