The Meeting of Ecumenical Patriarch Bartholomew and Pope Francis in the Holy City of Jerusalem, May 24-26

Print The Meeting of Ecumenical Patriarch Bartholomew and Pope Francis in the Holy City of Jerusalem, May 24-26
Mail 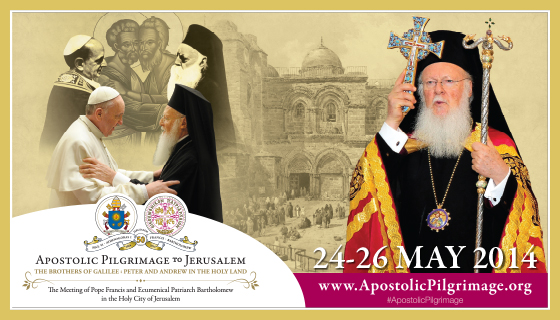 NEw York, NY - The Order of Saint Andrew, Archons of the Ecumenical Patriarchate take this opportunity to inform the faithful regarding the upcoming historic meeting between His All-Holiness Ecumenical Patriarch Bartholomew and His Holiness Pope Francis taking place in Jerusalem May 25 – 26, 2014. We encourage all Archons to share this email with your relatives, friends and colleagues and follow the Apostolic Encounter on www.apostolicpilgrimage.org.

On Sunday, May 25, 2014, Ecumenical Patriarch Bartholomew and Pope Francis will meet at the Church of the Holy Sepulcher to commemorate a meeting in the Holy Land fifty years ago by their revered predecessors, Ecumenical Patriarch Athenagoras and Pope Paul VI.  The historic meeting in 1964 marked the beginning of a new era in the relations between the Churches of Rome and Constantinople, and indirectly between Roman Catholicism and Orthodoxy as a whole. The significance of that event can only be fully appreciated if placed in the context of a millenium dominated by theological estrangement and mutual mistrust between the two great traditions of the Church.

The 1964 meeting in Jerusalem was the beginning of a long journey, which the succeeding generations were called to continue. Looking back at the fifty years after the event, both Churches can be grateful that a great deal has been achieved both in the "dialogue of love" (namely, the general exchanges and communications between their leaders and representatives) and in the "dialogue of truth" (namely, the official theological dialogues and conversations). The spirit of fraternal love and mutual respect has replaced the old polemic and suspicion. There is still a lot to be achieved and, indeed, the path seems to be long. This path, however, must be followed in spite of difficulties; there is no alternative.

The forthcoming prayer service of Ecumenical Patriarch Bartholomew and Pope Francis in Jerusalem on May 25, 2014 is expected to be a strong symbolic confirmation of the commitment and determination to continue the path, which the two great Church leaders inaugurated half a century ago. Their contemporary witness is in the same spirit of love and faithfulness to the truth of the Gospel, as was transmitted to us by the great Fathers of the Church. Moreover, the problems facing humanity throughout the world call for cooperative leadership between these leaders of Christianity.

Ecumenical Patriarch Bartholomew Explains the Purpose of the Meeting in Jerusalem

Fr. Alexander Karloutsos Discusses the Importance of the Upcoming Meeting